In 2014 Bob and I decided to climb Ben Ledi after work so we could watch the sunrise on midsummer morning. We are by no means druids, but the plan was to get to the top as it was getting dark, bivouac on the summit and then rise early to photograph the early morning sunrise. After work we packed our gear and drove to Ben Ledi, stopping at the chippy in Callander - I had a haggis supper with brown sauce! Just in case you were interested...

After eating our fill of greasy food at Callander, we drove to the Ben Ledi car park and headed up the Stank Glen route as the main path was closed for forestry work. It was a good climb up and we reached the top as it was getting dark, just before 11pm.

I wondered about in the fading light and took some pictures. It was quite windy with a chill in the air but I enjoyed taking pictures from the high top looking over the town of Callander and the distant streetlights of the central belt of Scotland beyond. 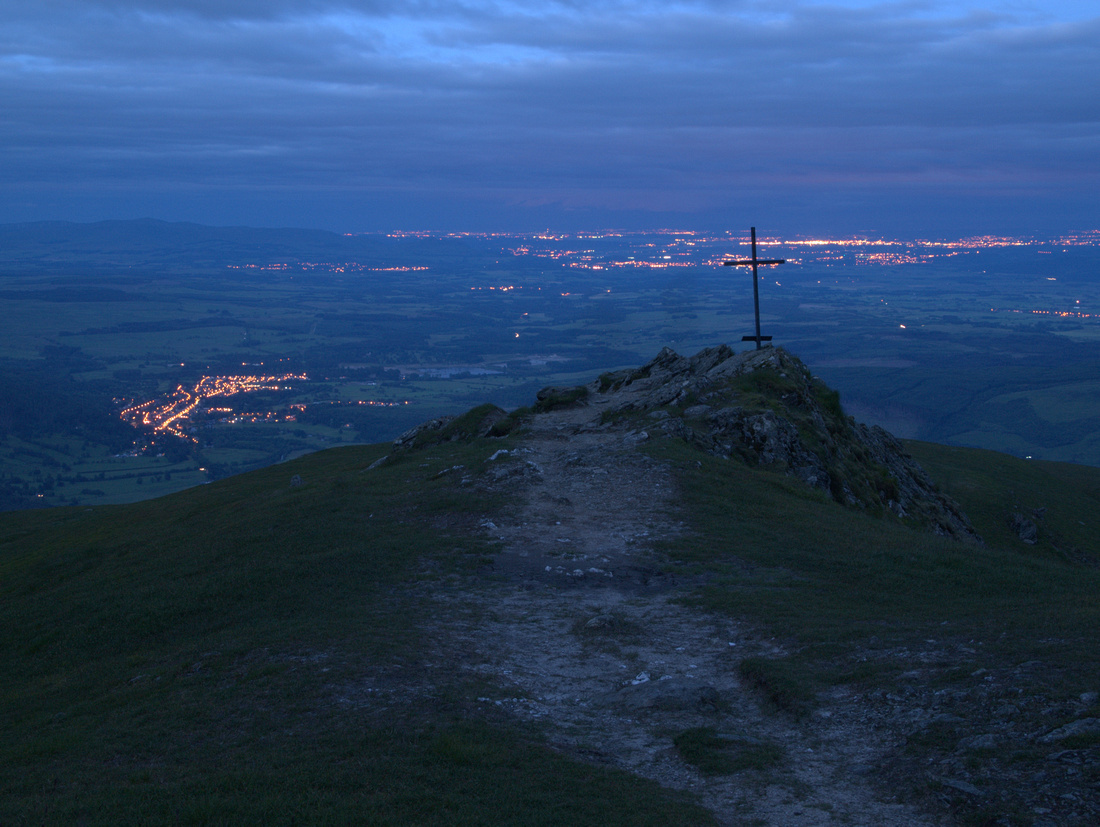 The Central belt from Ben LediThe streetlights close by are from Callander. The ones in the distance are Stirling & Falkirk (maybe)...

The cross in the picture (from Wikipedia) “...commemorates Sergeant Harry Laurie of the Killin Scottish Mountain Rescue team, who died on 1 February 1987 during a rescue operation on Ben More near Crianlarich when the helicopter crashed”. It is a great but sad tribute.

As we were contemplating unpacking our stuff, we were joined at the top by a man with his two teenage sons, it was one of the sons birthday so they had climbed to the top and were going to release a firework at midnight to mark the end of the day. They spoke to us for quite a while and one of their dogs huddled into me as I sat on the grass talking to them, to keep warm. After they departed and had set their rocket off, it was time for us to unpack and get about 4 hours sleep before the sunrise.

The bivouac we had planned involved using our orange plastic emergency sacks to sleep in with a sleeping bag. I had packed fairly light so did not have a mat or much in the way of warm clothing, except for a hat, gloves, fleece and waterproofs. It was midsummer (I had reasoned) no need to pack too much... So we picked the best wind sheltered spot near the summit cairn and climbed into our respective sacks , Bob was better equipped than me and quickly fell asleep, while I lay trying to figure out which bit of me was the coldest. I took this picture of my predicament - the orange sack is Bob nearby in his sleeping bag snoring away in his warm down bag. I was having intermittent snoozes due to the cold - this is when I realised how far north I live! 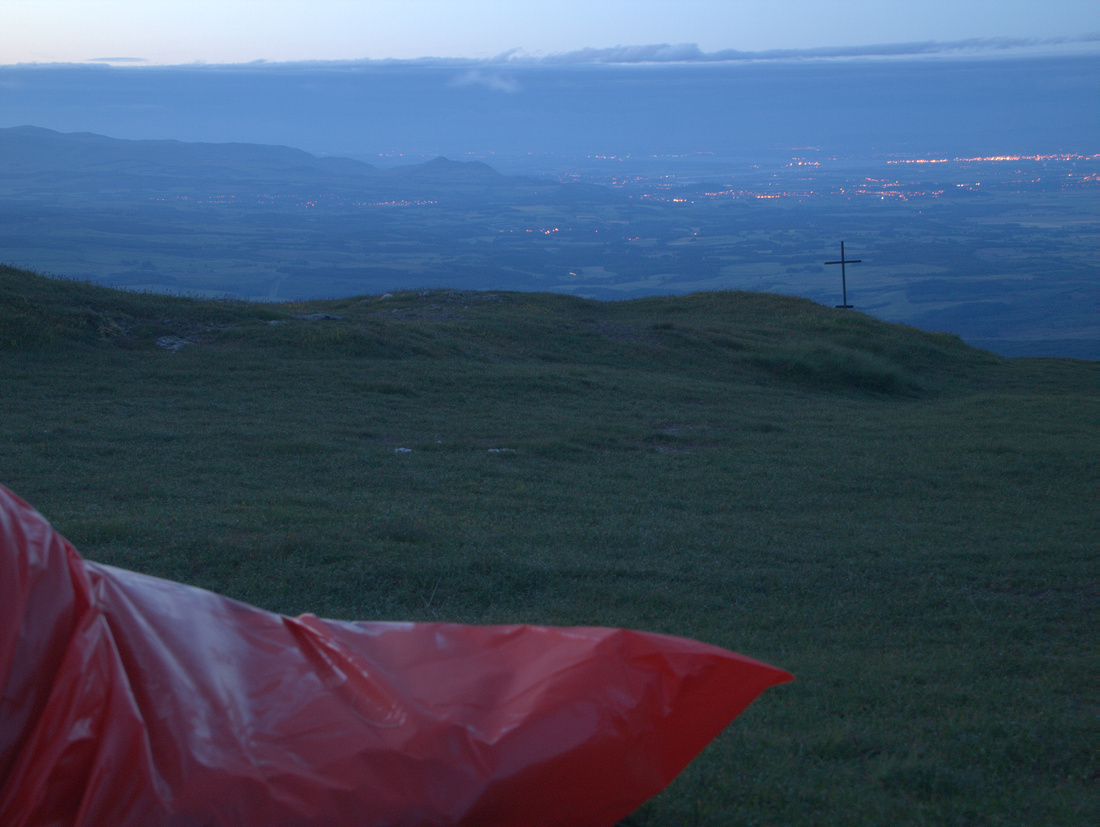 Around 2am about six young men turned up, I had sat up with a fright on hearing them approaching and we nodded nervously to each other... They then proceeded to pitch a tent about ten metres away, about four of them squeezing into the small two man tent with two others condemned to the cold sleeping bag experience outside of the tent. I never expected the top of a hill to be quite so busy!

It never really got truly dark. After the sun set in the west, you could see a brighter patch of sky head northward over time and once it got to the east the sky started to lighten up again. By this time I had abandoned my bivvy and was running about doing star jumps, so I took this picture looking south as the sky brightened from the east. 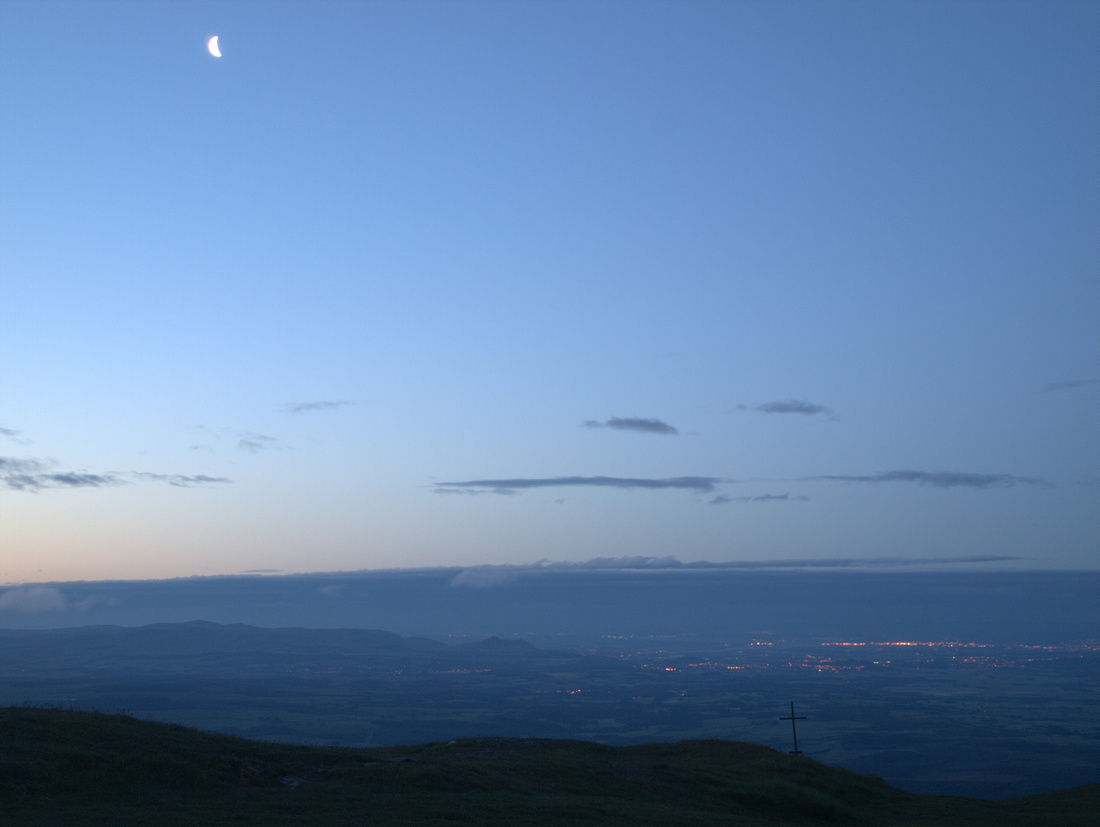 Dawn on Ben LediThe sun will be rising soon.

The clouds were sitting low over the hills like they usually do at night. As the sun started to get close, I was worried that the cloud would spoil the sunrise.I did not need to worry, the cloud started to move just in time and it made the light more interesting with the bright and dark patches. I had my Olympus EP-1 camera, which is a bit noisy, but lightweight so I started to take some pictures of the sun rising.

Looking EastThe sun was still behind the hills but it was starting to peek through in various places, as I stood on Ben Ledi waiting for it. 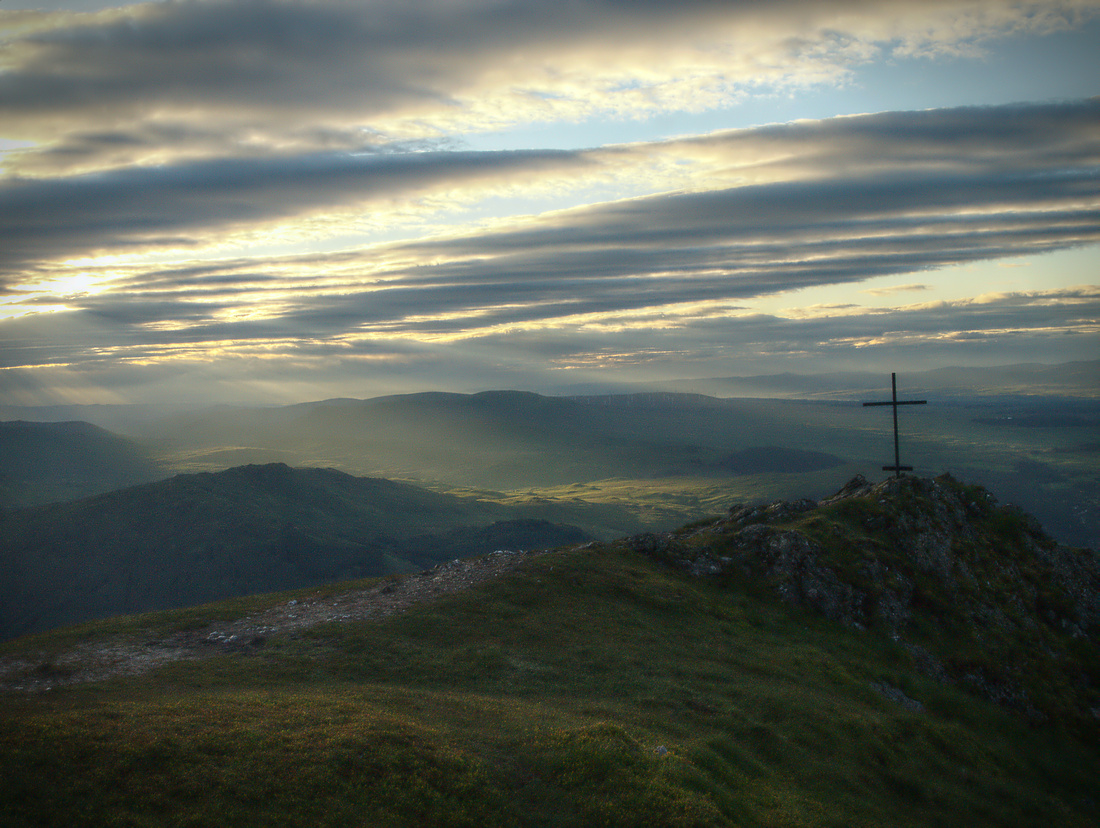 The Cross on Ben LediThis cross commemorates Sgt Harry Laurie of the Killin Mountain Rescue team who sadly died during a rescue operation on Ben More. 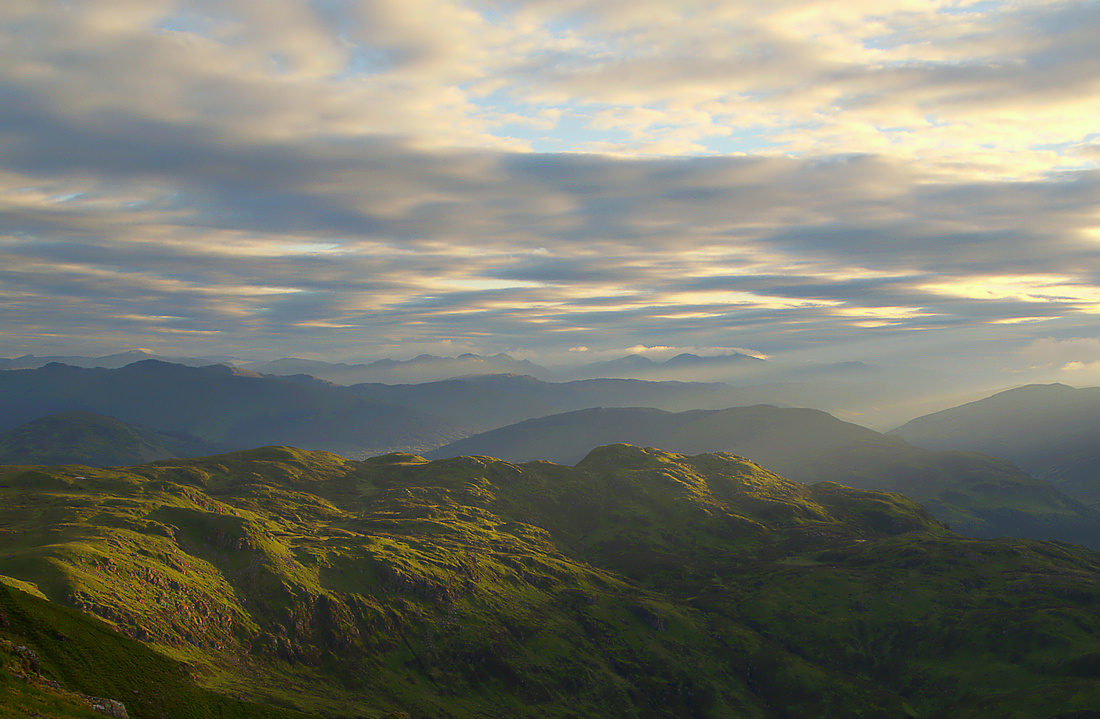 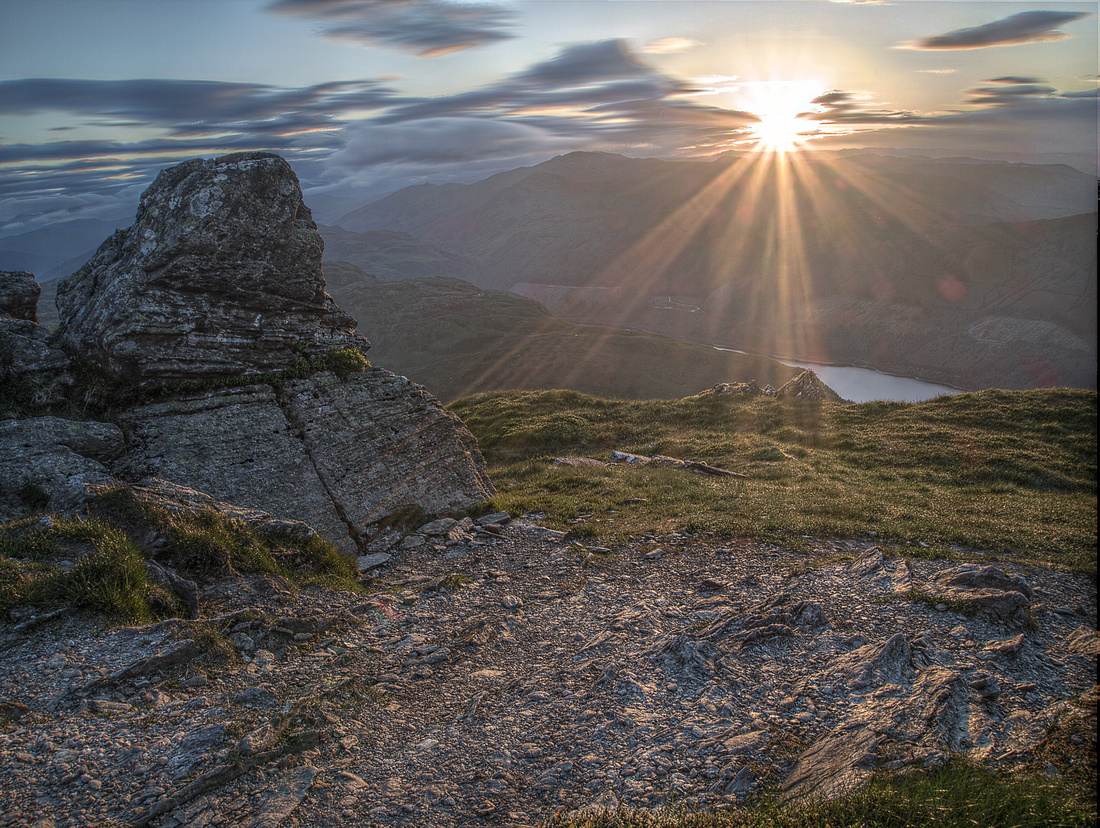 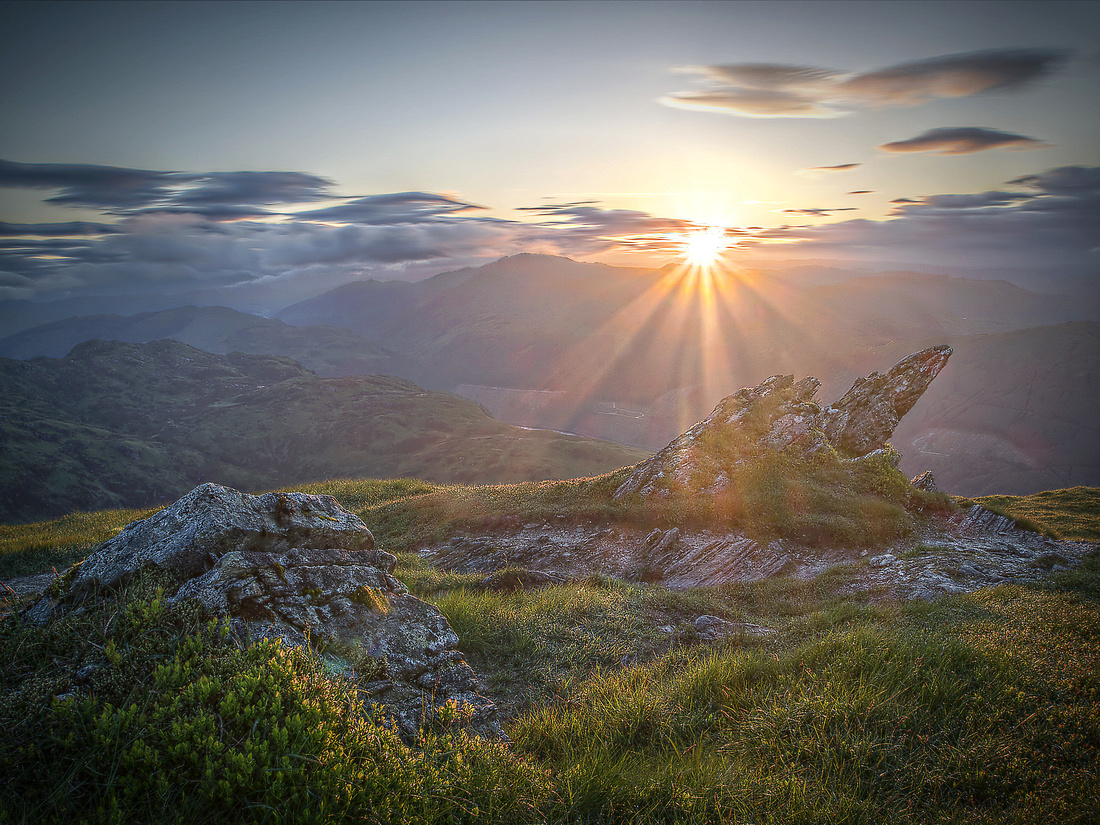 The six guys were also here for the same reason and there was plenty of room for us both to snap away. After the golden hour was over, Bob and I packed up and headed down the hill. Eventually we reached the car and drove to Callander to catch the bakers opening so we could eat some more greasy food - It was good though!

After we had eaten it was time to head home, Bob was driving which was just as well as I was struggling to stay awake having only managed a couple of hours of uncomfortable snoozing. We got home about 9am and I managed to spend the rest of that Saturday in my bed, to recapture my lost sleep.