I have mentioned my friend Bob in some of my previous blogs and we have known each other over ten years, as Bob lives next door to me. Not only is he a great neighbour with a fantastic barbecue, he is a munroist too, and his hobby is to climb munros and enjoy the views. When it comes to hill walking he is hugely experienced compared to me, where I see a cliff, Bob sees a path, and so on. He is very tolerant too of my ambling pace and my ashen faced moments when we have to scramble down some exposed mountain edge. He has climbed many hills and mountains in comparison to myself, I am more of a general walker, a rambler, or a stravaiger (to use a Scottish word) than I am a munroist; so it is great to go with someone who has the experience to just go for it and get to the top, where I would turn back.

The word stravaig means “to wander aimlessly” or to “saunter or stroll” - This is the word to best describe my solitary wanderings. Another word that I wished I could use to describe my wanderings is the english word coddiwomple, that word sounds great to me but it means to “To travel in a purposeful manner towards a vague destination”. That is not generally me, but that is what munroists like Bob do, they coddiwomple. This is because any place you haven’t been before, like the top of a munro, is in my book, vague. Munroists travel with purpose as well, to get to the munro they have yet to climb, so the outward journey of a munroist fits the description perfectly. The return journey to where they started however, won’t be a coddiwomple as having already been there, it is not a vague destination...  If it is a circular route however the route that gets you back may certainly be vague!

Going back to Bob, he gives me a shout from time to time to go and bag a Munro with him and we had subsequently arranged to go for a coddiwomple in late October, as the Sunday weather forecast was good in the east and Bob was trying to keep on track to bag another munro. He asked if I fancied tackling Beinn Dearg with him, which is a munro best approached from Blair Atholl. This hill is further flung than many and tackling it involves an 18 mile (29km) walk. Although I hadn't been out much in the last few weeks preceding this, I readily agreed to come along as that was a good way to blow away the cobwebs.

We arrived at the Glen Tilt car park and headed off up an autumnal lane at the back of Blair Castle. It was an overcast misty morning and despite the low light, I tried to get a picture. 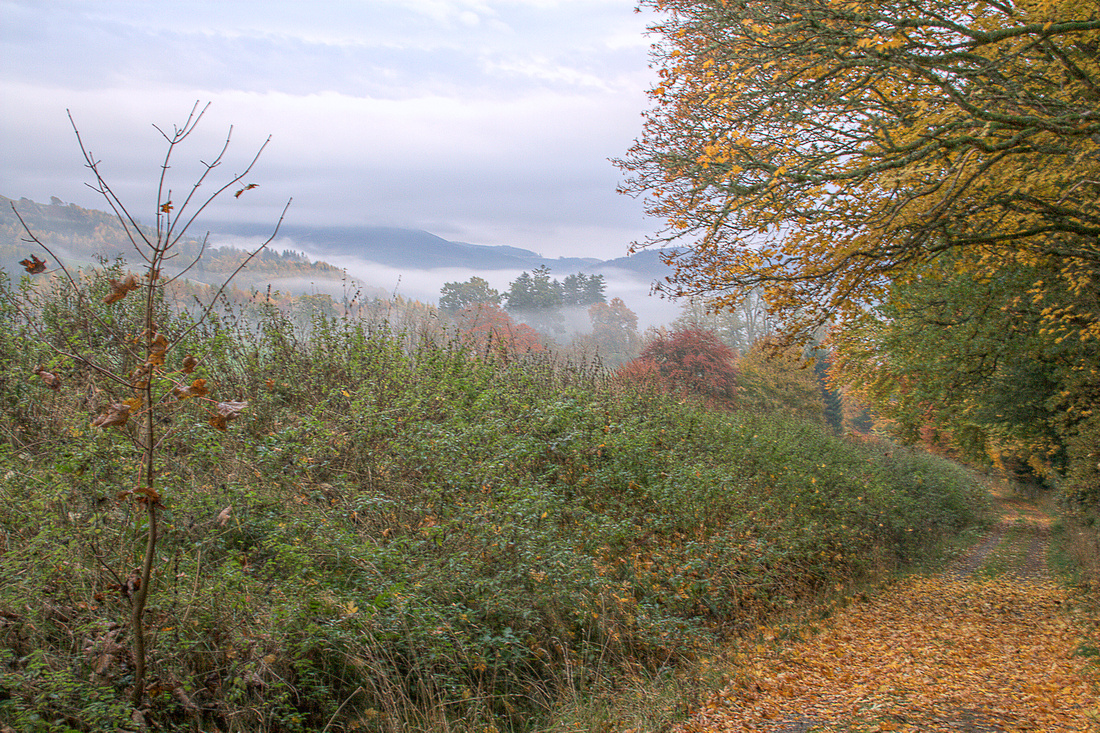 Not long after I took this picture, we reached the end of the beautiful lane with its mature autumnal trees. At the gate that marked the paved roads end, the expanse of the moorland opened up abruptly before us. We went through the gate marching on at a good pace and I took a few pictures looking over to a dusky Schiehallion, as the sun started to break through. 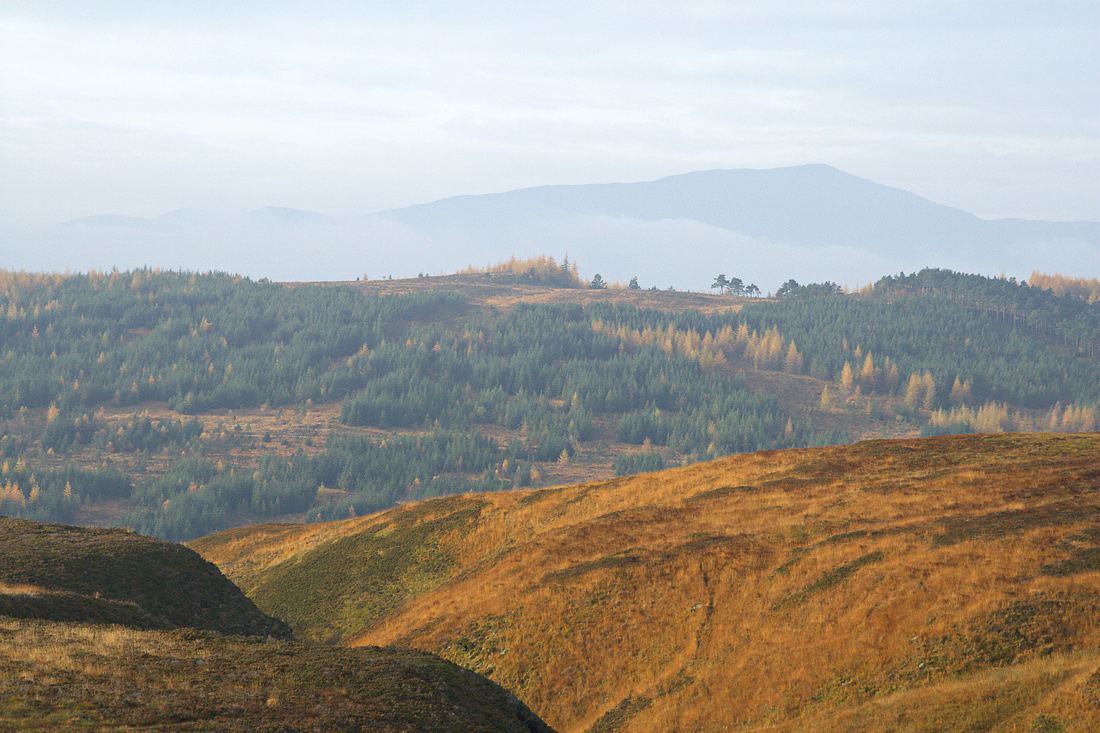 Across The MoorLooking Southwest down Glen Bruar towards Schiehallion

We marched on in the now sunny landscape, as the sun had cleared the low misty clouds. After a couple of hours we descended slightly off the moor and suddenly there was Allt Scheicheachan Bothy below us in a small glen. We could see that two people were standing outside and they were cuddling each other, really cuddling each other. They were also kissing each other passionately, like they do sometimes on films, except, in this case, it was less glamorous. It was an unexpected sight and I started kicking my feet on the track as we approached to make more noise, I also tried to cough but to no avail, I was struggling to make myself heard as we approached - It was starting to get a bit awkward! Luckily they stopped before we got too close and they went inside the bothy. I took this picture quickly and then we walked on, forsaking a comfortable bothy lunch wishing to not disturb the amorous occupants any more than we needed to. 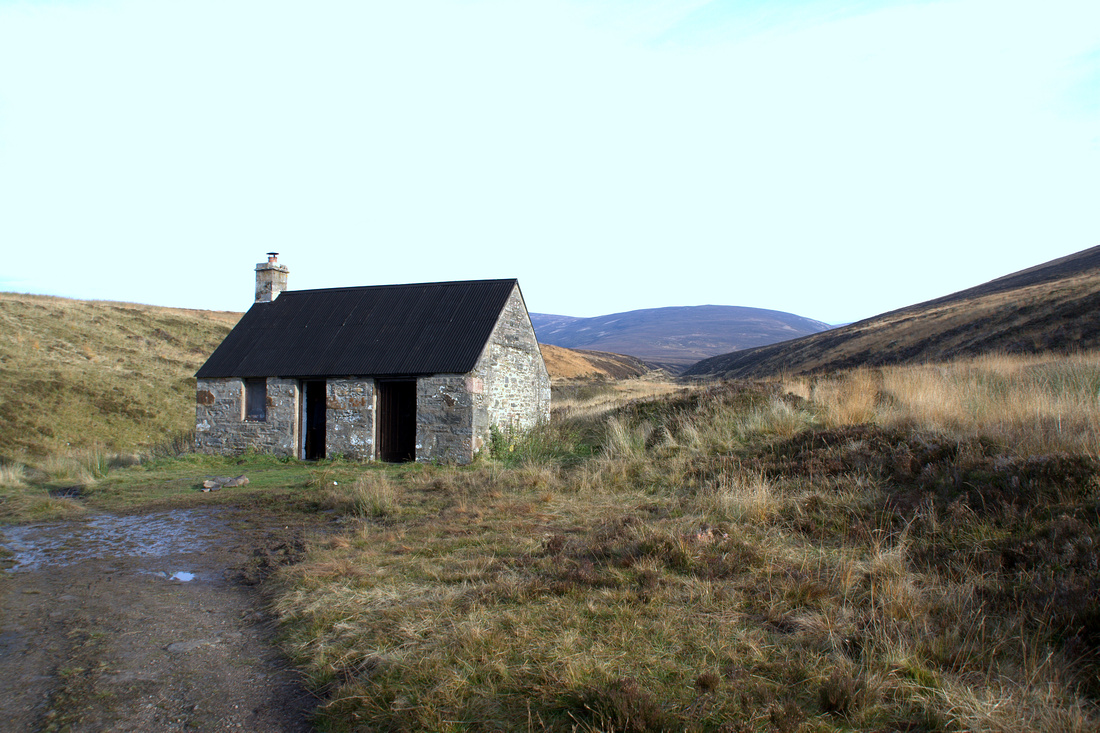 We stopped a bit further up the track from the bothy and had a quick lunch to refuel in anticipation of the climb up Beinn Dearg that we were rapidly approaching.  After we refuelled,  we headed off to tackle the ascent. The ascent of this hill is probably one of the easiest I have done, as you start the main climb quite high up already. As we climbed, the views opened up and I snapped away. 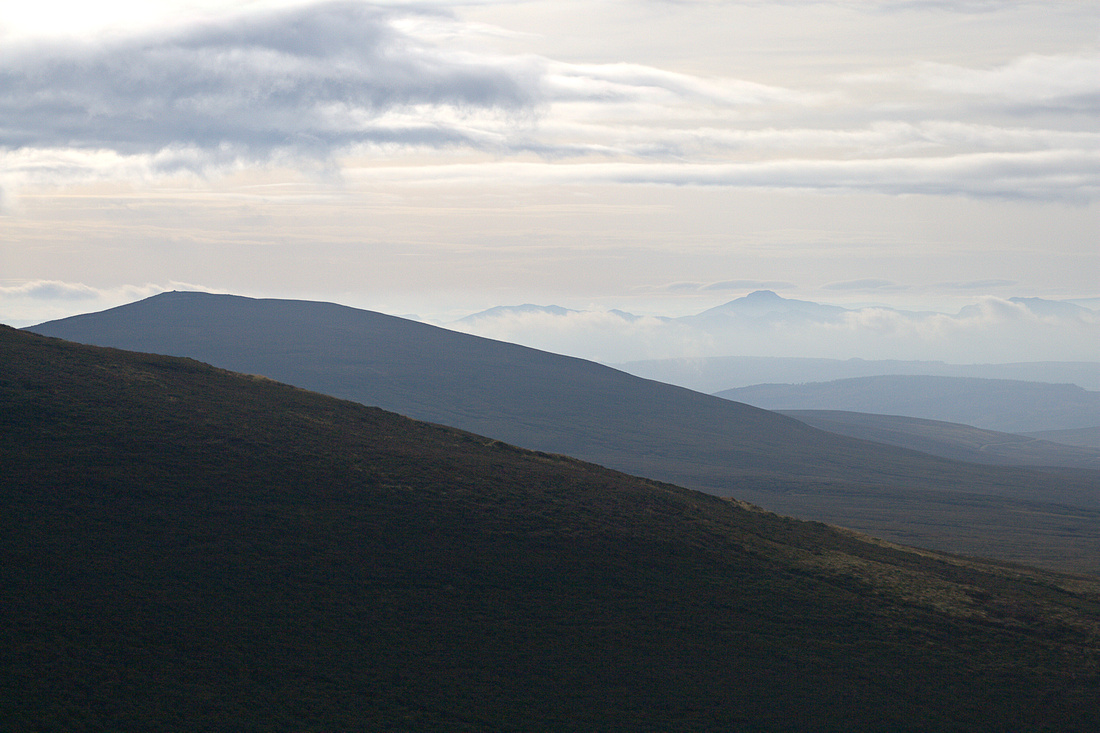 Misty ClimbAs we climbed Beinn Dearg, we started to see the views over the moors in the misty midday light 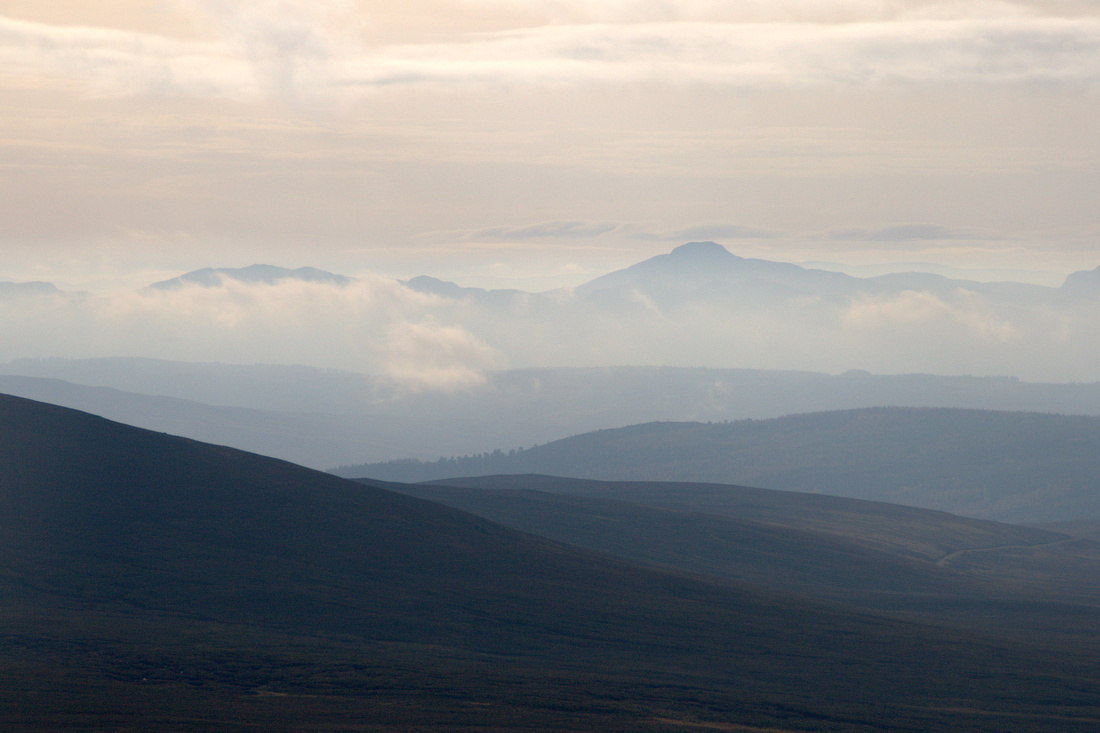 Long Road HomeClimbing Beinn Dearg, I could see the distant track that we would have to follow for our 9 mile walk back to the car. 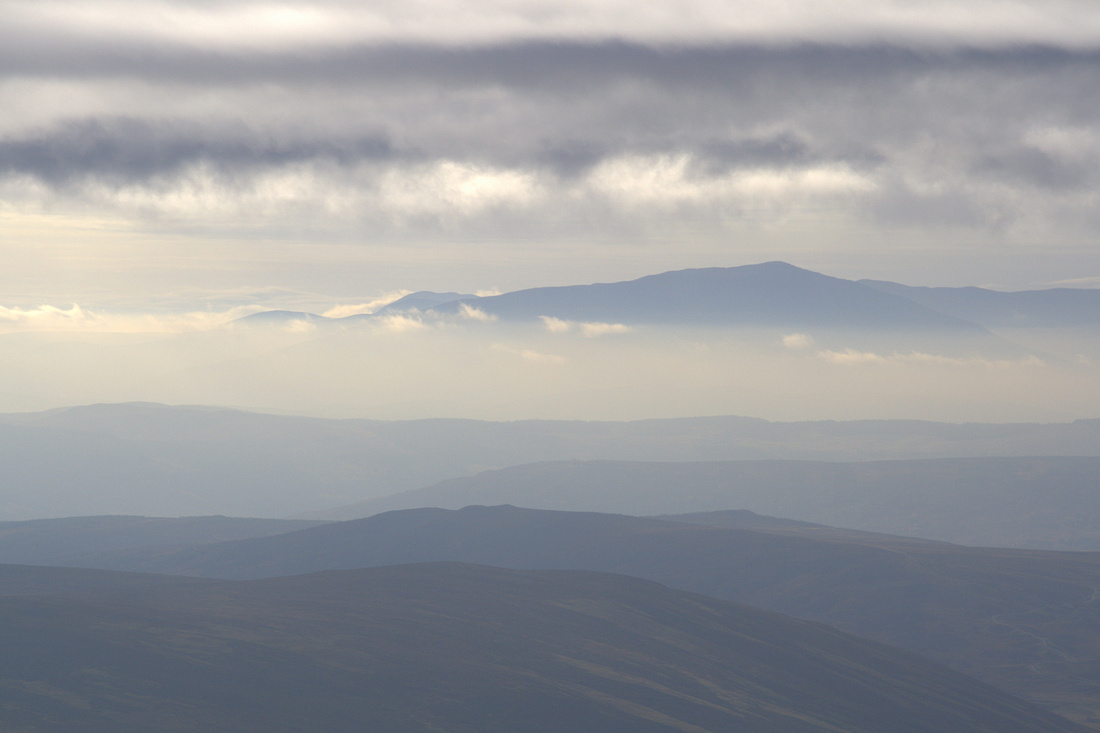 Schiehallion from Beinn DeargTaken on a misty late October morning Midday MistTaken from the top of Beinn Dearg (Blair Atholl)

Eventually we reached the top and I took more pictures in between a second lunch in the shelter of the wall surrounding the summit cairn. There was an interesting cloud hanging around too! 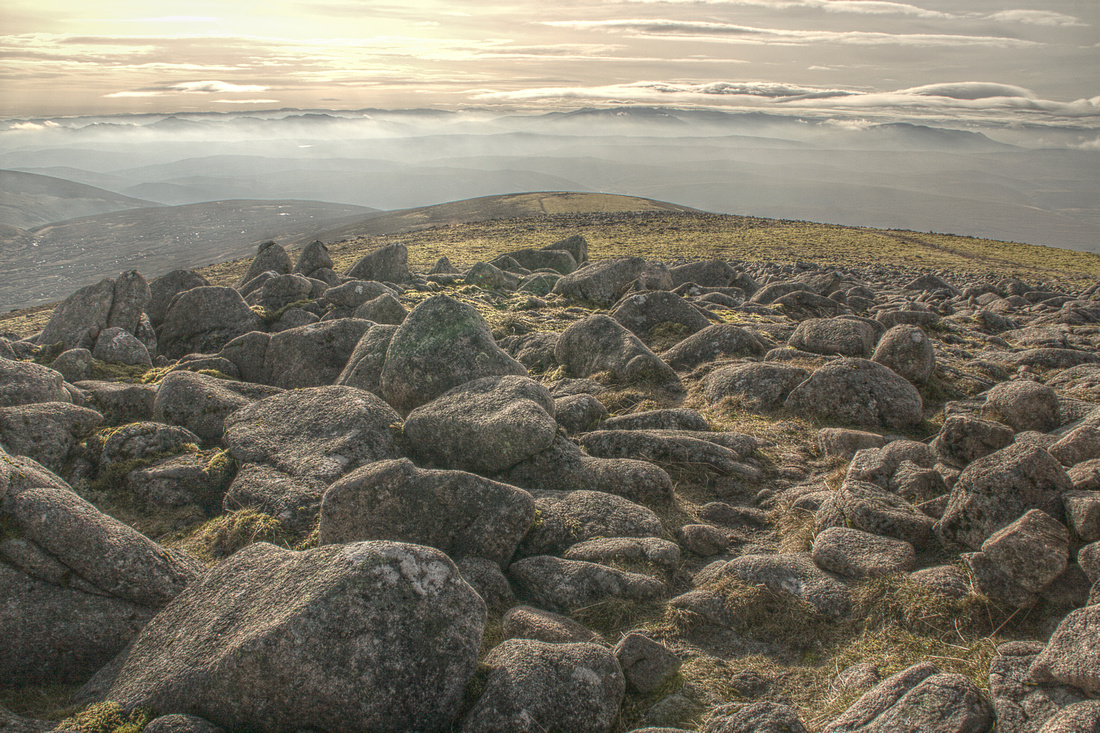 Top of Beinn DeargLooking west from the top, over the boulder strewn summit. 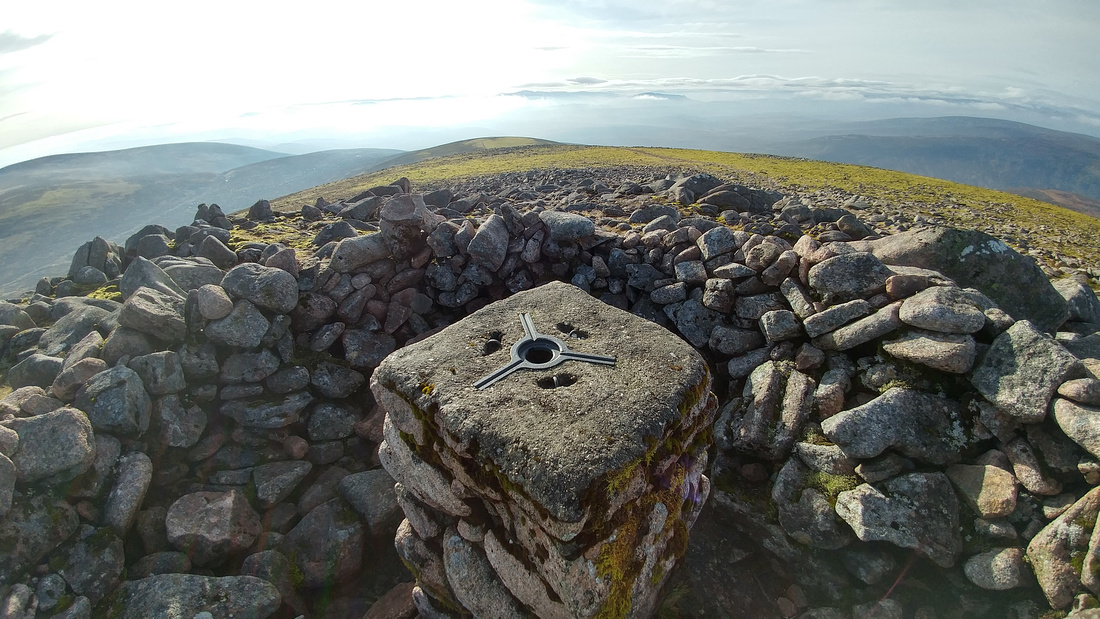 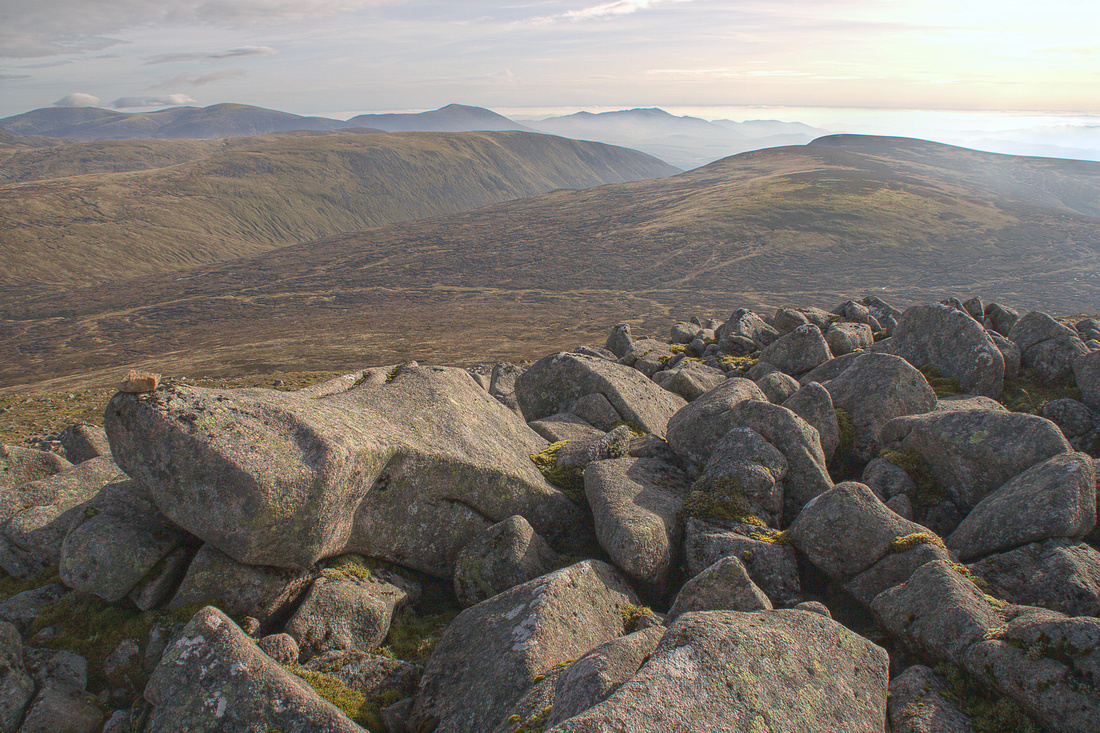 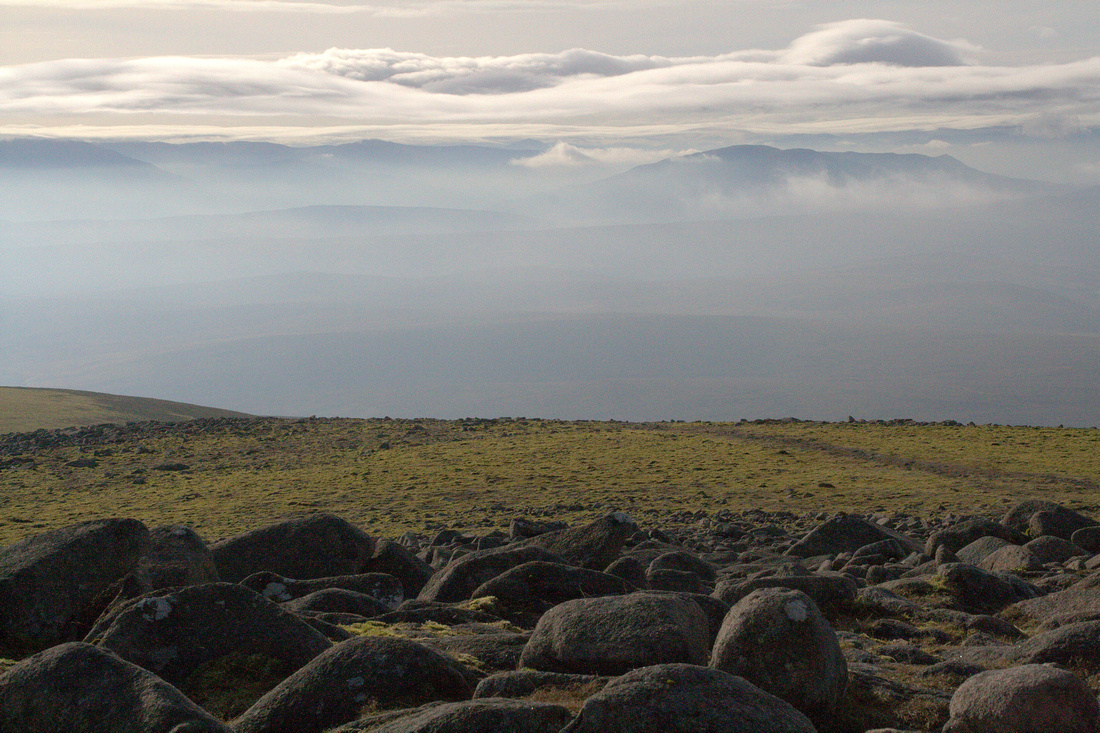 View from the topLooking west from the summit of Beinn Dearg 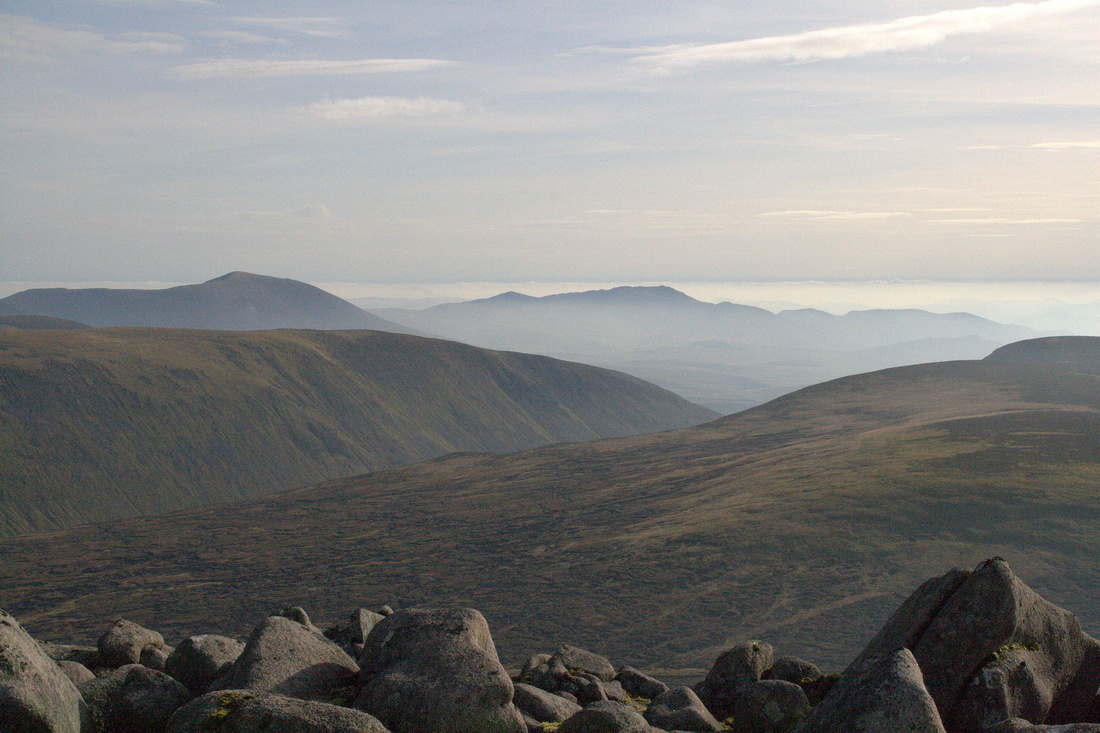 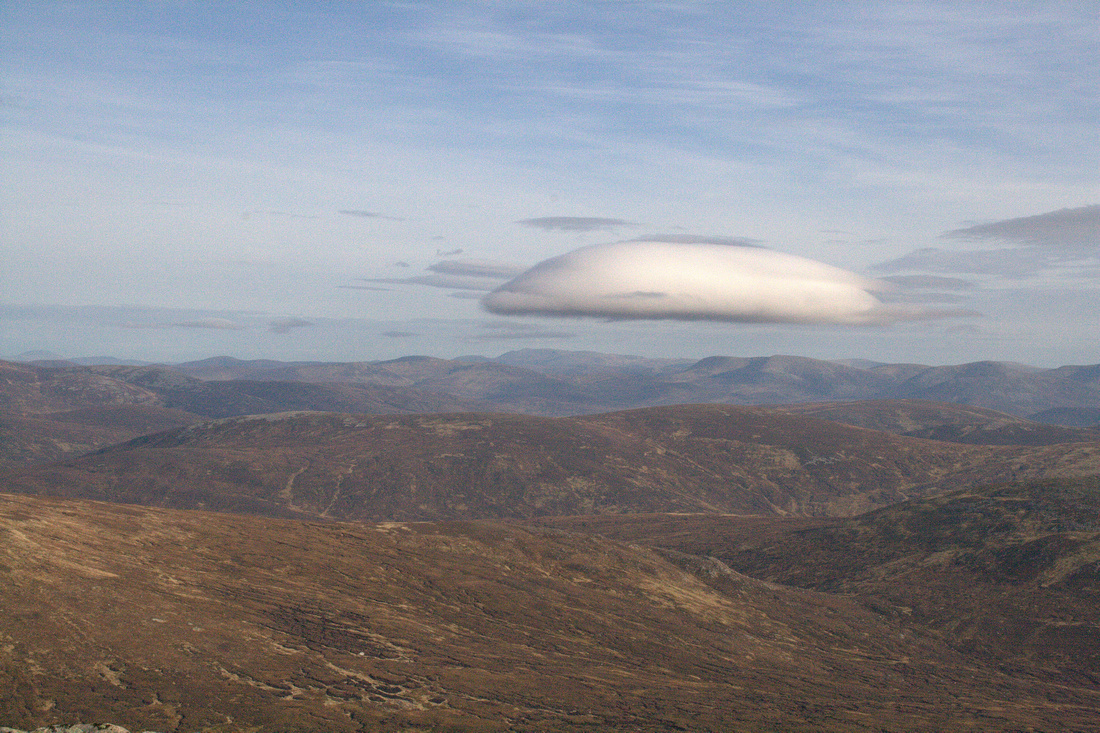 Unusual CloudThis cloud seemed to suddenly appear and it hovered in the same place for quite a while before disappearing.

After we had finished eating and taking pictures,  it was time to head back down and take the alternative track back so we could walk a circular route. I took this picture of the road ahead. 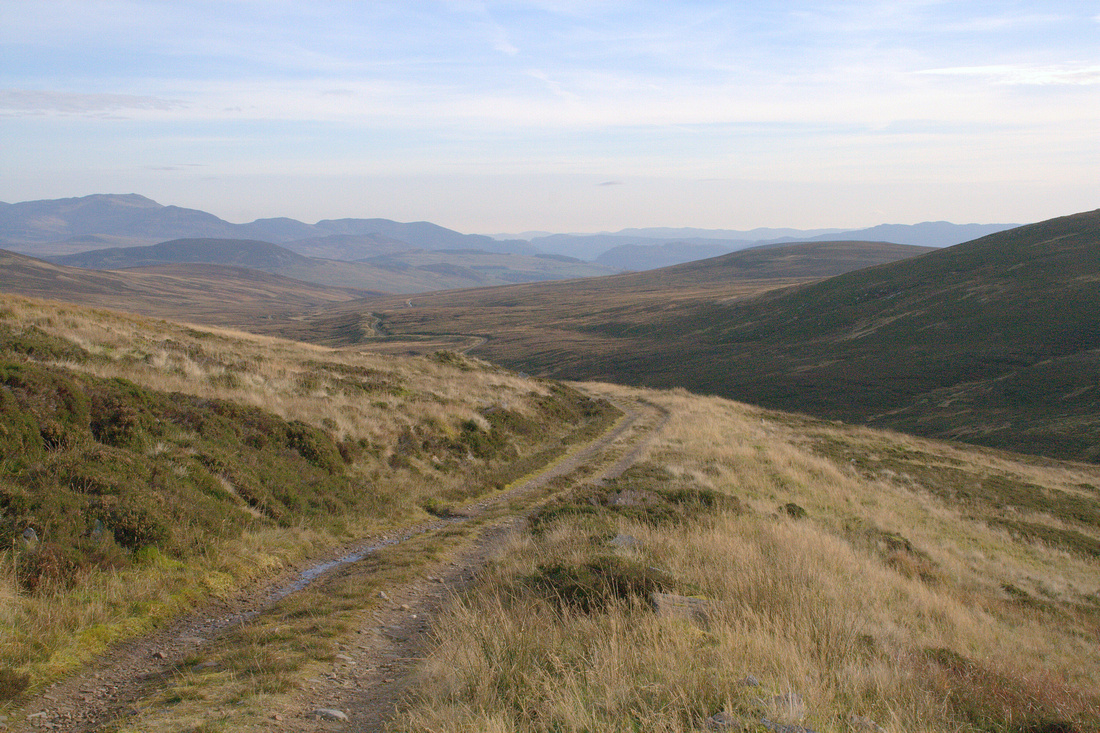 The way backThe track back from Beinn Dearg to Blair Atholl (circular route).

It was a long walk and, my feet were getting sore near the end. As we left the moorland,  the trees were being lit up by the last of the day's sunlight. 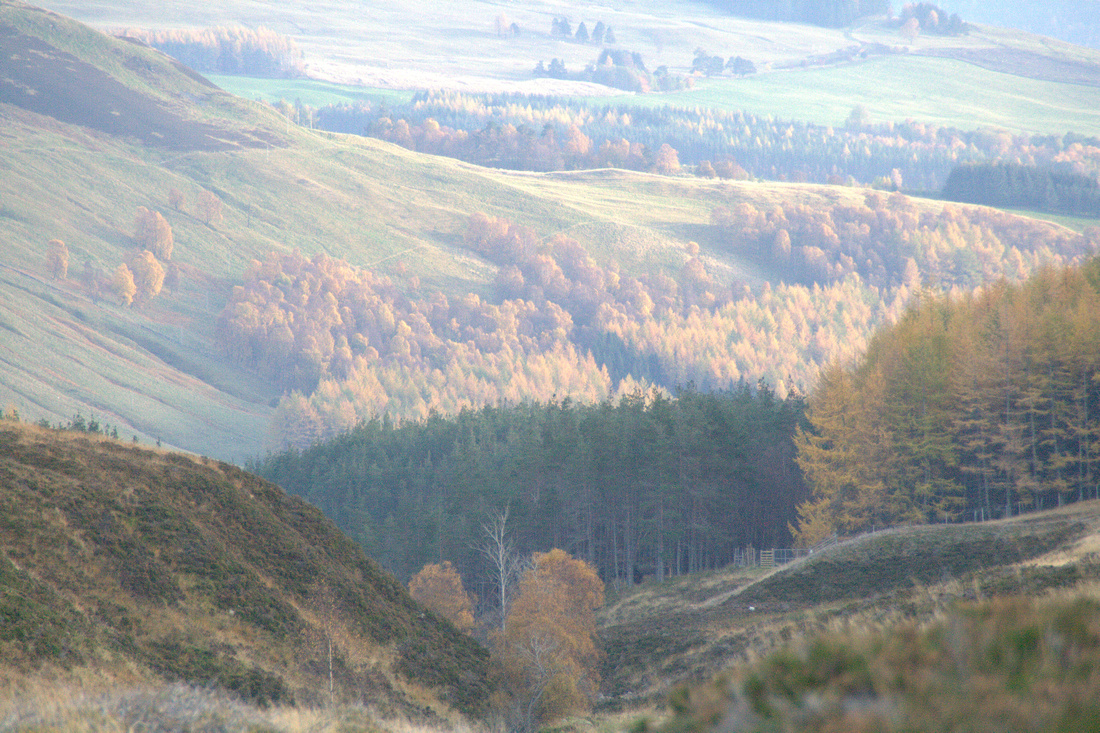 The setting sunAs we reach the end of the moorland, the low sun lights up selective areas 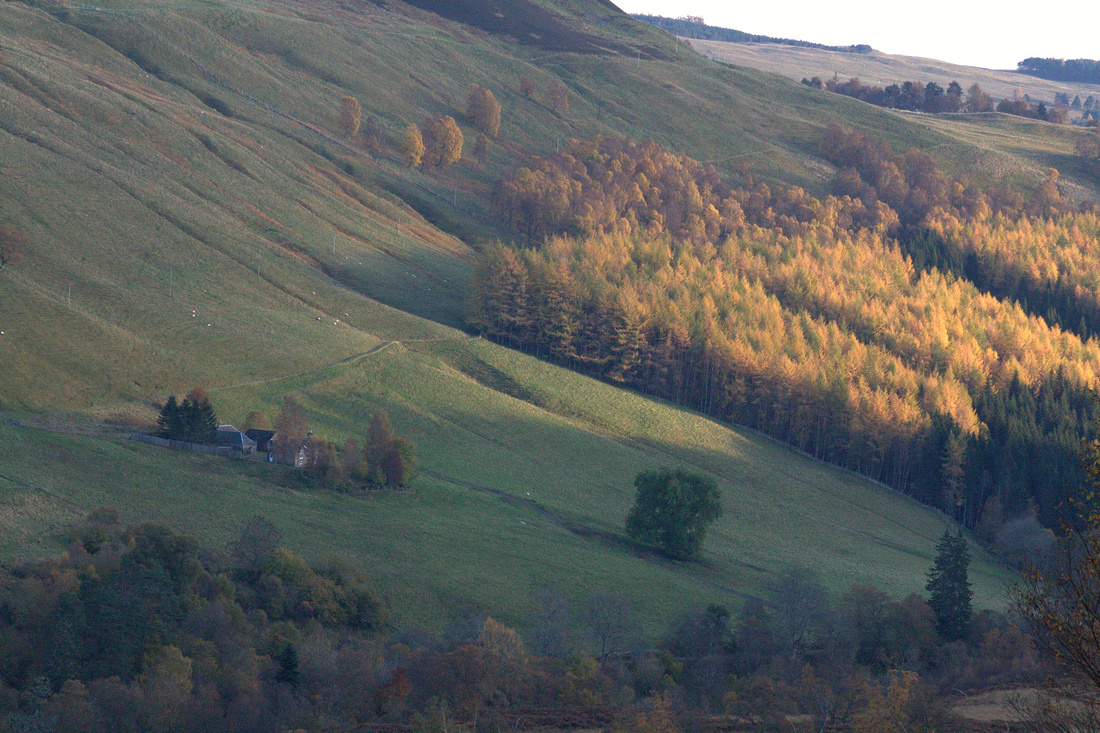 Golden timeNearing the end of walk, the setting sun selectively lights up the trees and leaves the farm in the shade.

The last 30 minutes of the walk was sore on my feet, the walk out had felt quick and effortless.  The walk back felt like it was twice as long, even though it wasn't, sore feet have that effect! Just before it started to get dark we finally reached the car, it was a relief to finally sit down.