A Perfect Day In The Ochil Hills

I know I've had a good walk when I catch myself humming the song "Perfect Day" by Lou Reed near the end. This is what I was humming to myself with a smile on my face, as I walked down the track towards Castle Campbell. Even Digger, my dog, looked content although he was getting tired, which is signified by him walking to heel.

It was mid-November 2014 and the sun was starting to set. It was glorious, the grasses and ferns lit up by the warm golden sun...It felt like a summers day but the deep reds told otherwise. 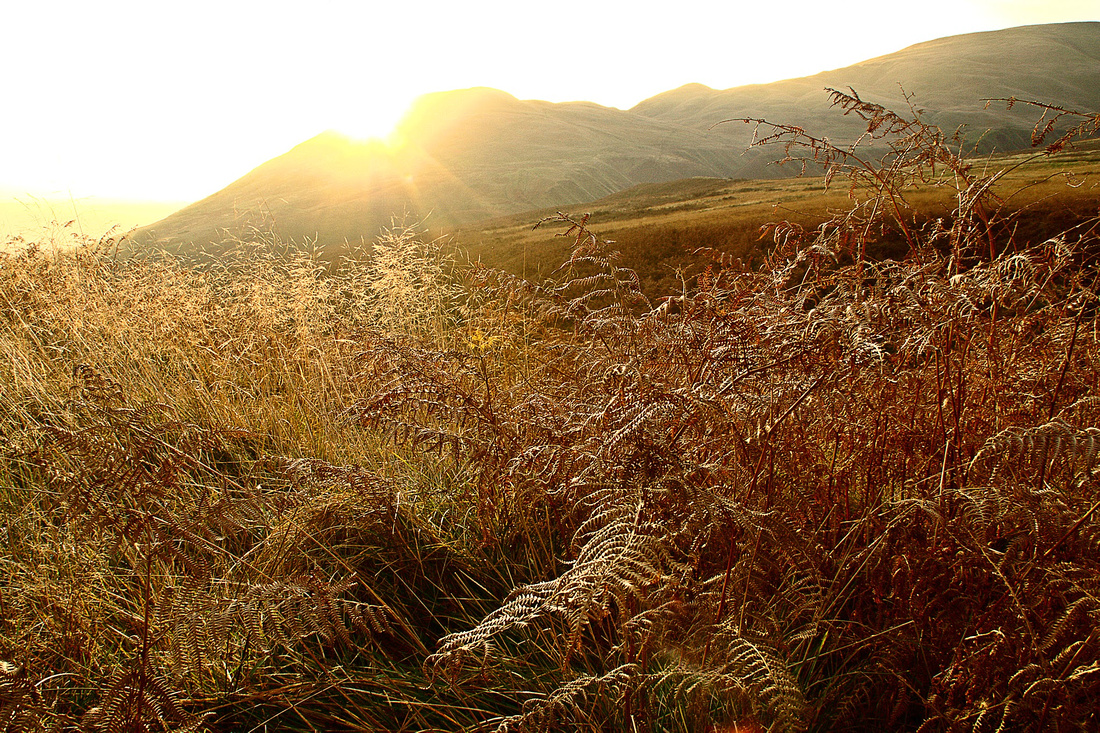 I had just finished walking a circular route in the Ochil Hills in Scotland, starting with the climb up King's Seat Hill, dropping into the Glen of Sorrow to cross the Burn of Sorrow. I then climbed back up towards Tarmangie Hill and Whitewisp Hill before descending down via Saddle Hill.

What made this walk particularly sweet was the cloud inversion which was slightly lower than the 600 metres summits of these hills.

I had looked out of my window earlier that day and had looked at the gloomy sky. The viability of a walk was considered as the poor visibility of the cloud meant a dull walk with nothing to see. I set off anyway and approaching Dollar from the South, the sunlit Ochil Hills confronted me in their full splendor as the cloud was wafting gently from the Northeast. Like a stream, the cloud left a slow-motion wake, like the water flowing past a boulder, so the hills were revealed.

Parking at the lower Castle Campbell car park, I stomped up the road which I refer to myself as the "warm-up" as it is a healthy climb to get me ready for the hills. Reaching the Castle, I followed the scenic path above the gorge of the Burn of Sorrow and headed up King's Seat Hill. It started to dawn on me that the gloomy cloud was shallow and on reaching the spitfire crash memorial this view confronted me. 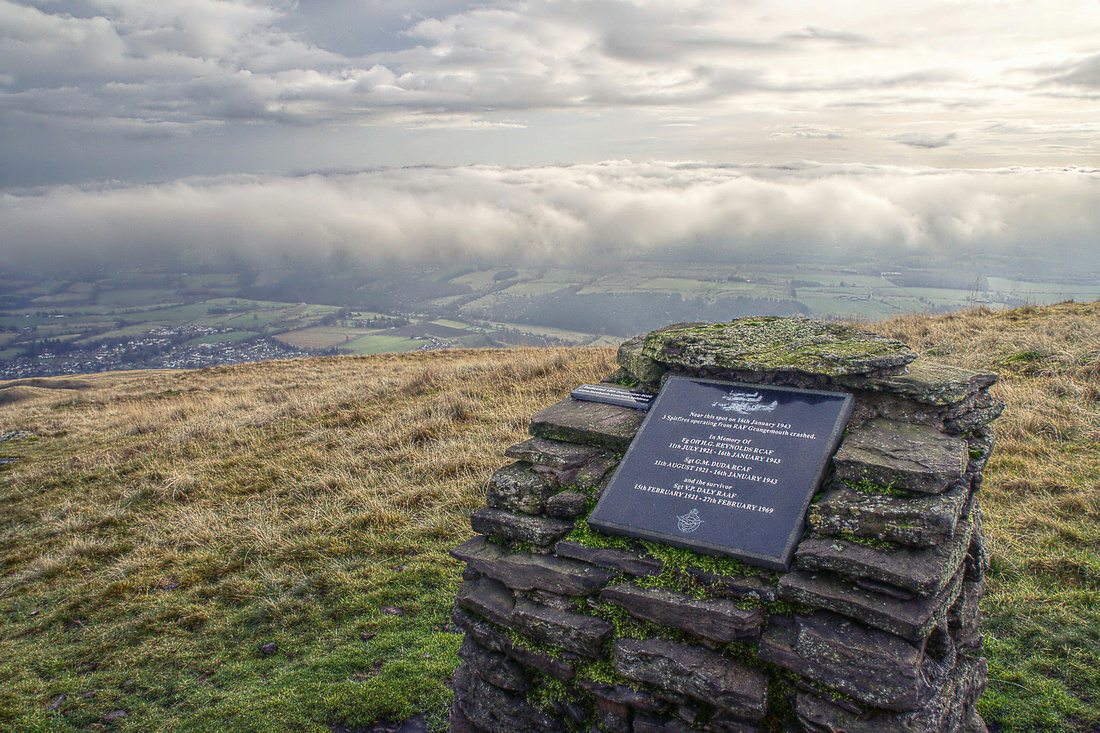 This monument remembers the events of 16th January 1943 when three Spitfires flying in low cloud hit the side of this hill. One of the pilots survived the impact and lay on the wintry hillside for 24 hours in the freezing temperatures before eventually being discovered by a farm worker - brave and hardy men.

Reaching the cairn on King's seat hill (it is not the summit!) I marveled at the low cloud to the south with the towns and village visible below in the cloud's wake. 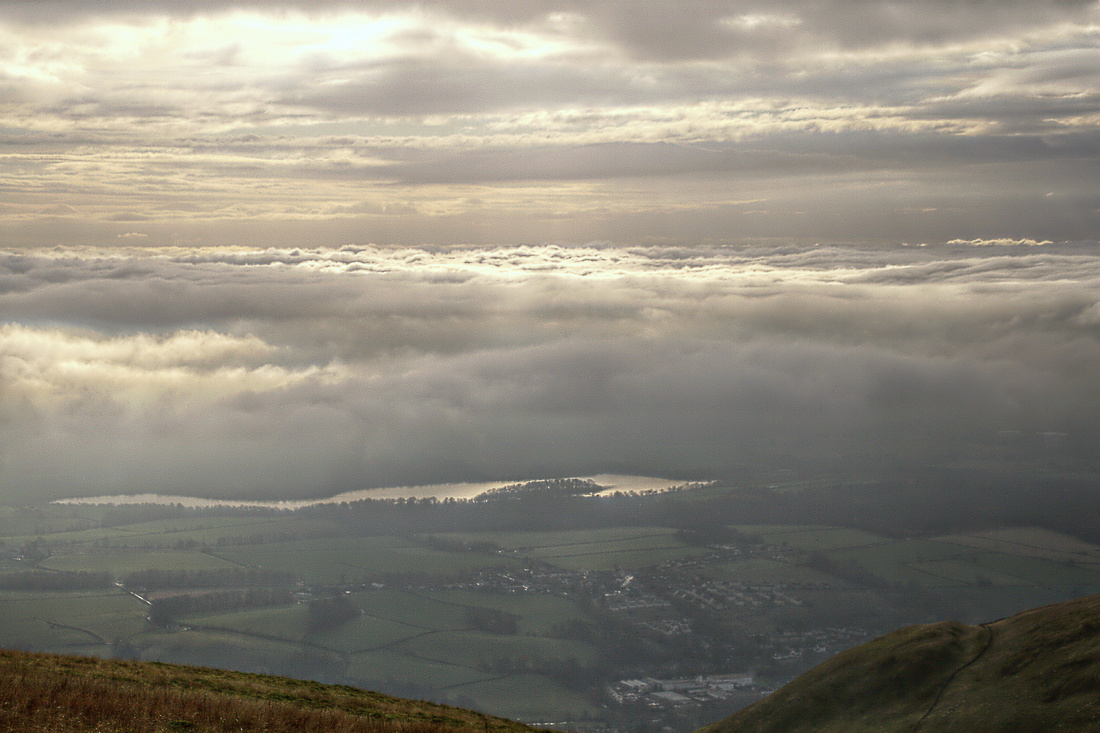 Looking South From King Seat Hill Standing above the clouds on King Seat hill, looking at the Forth Valley and the edge of Tillicoutry.

Reaching the true and indistinct summit of King's Seat Hill and looking North, I saw the sea of cloud with some distant hills poking out the top like islands. A few of the wind turbines at Burnfoot Hill windfarm were sticking up out of the cloud, turning slowly in the slight breeze. 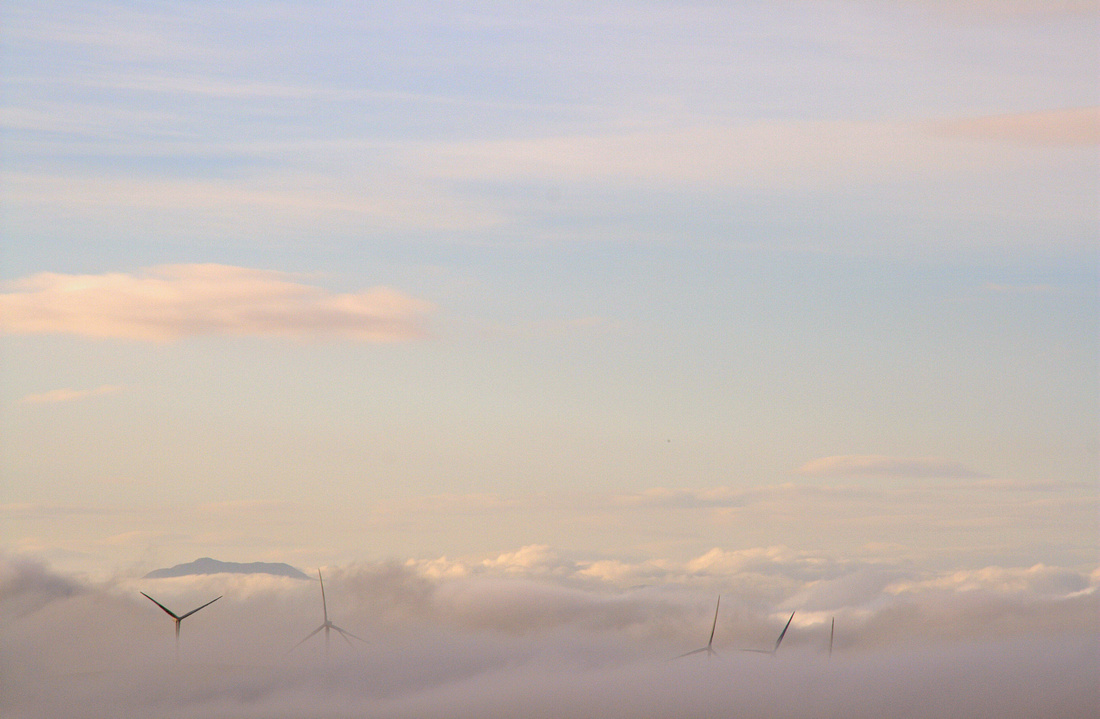 This picture looks Southwest towards Wood Hill and it shows the velvet texture of the Ochil Hills that is always striking in the sunlight. 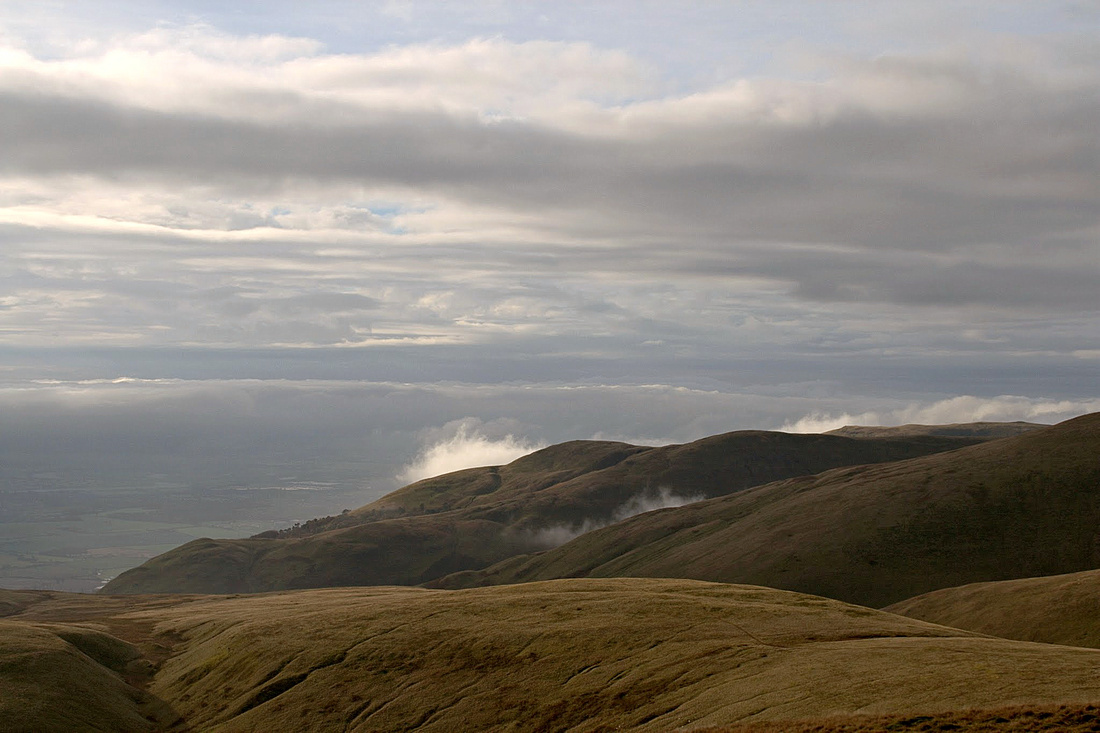 The Ochil HillsThe trees on Wood Hill can be seen in the distance, taken from the true summit of Kings Seat Hill

Before descending to the Glen of Sorrow, I watched the clouds lapping over Whitewisp hill. After pouring over the top, the cloud would subside and slowly build up to again pour over the top and subside, like slow motion ocean waves crashing onto a rock on a beach 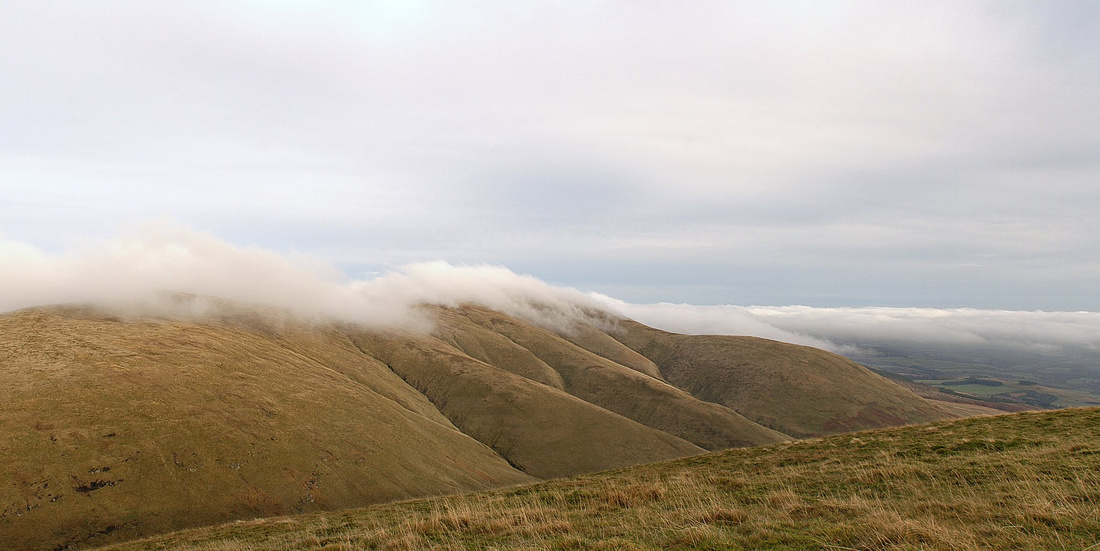 Clouds lapping over Whitewisp HillAs I stood on Kingseat Hill I watched the clouds build up and "pour" over the top of Whitewisp Hill. The clouds then retreated and built up for the next wave.

Descending King's Seat Hill, crossing the Burn of Sorrow and ascending up to Tarmangie Hill, I looked back and captured on my phone, the clouds assault on King's Seat Hill. The cloud had broken over Maddie Moss to the North and was reaching over like an arm with its fingers creeping onto King's Seat Hill, trying to grab a hold... 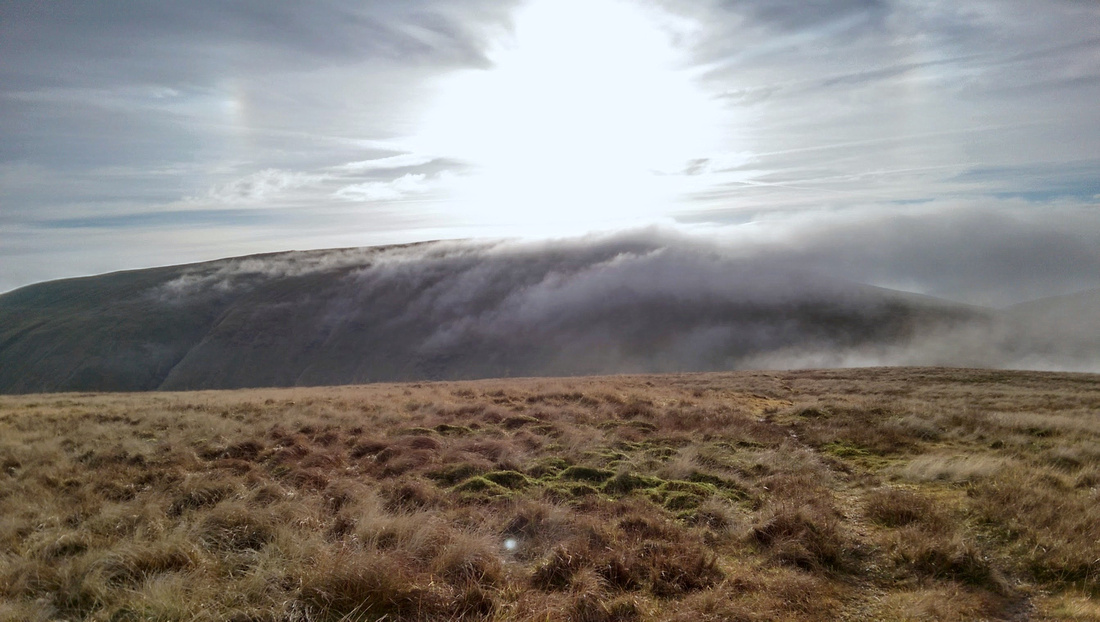 Passing near the summit of Tarmangie Hill and following the wall towards Whitewisp Hill, I could see the cloud approaching again from the East.The cloud started to rise up and approach me. 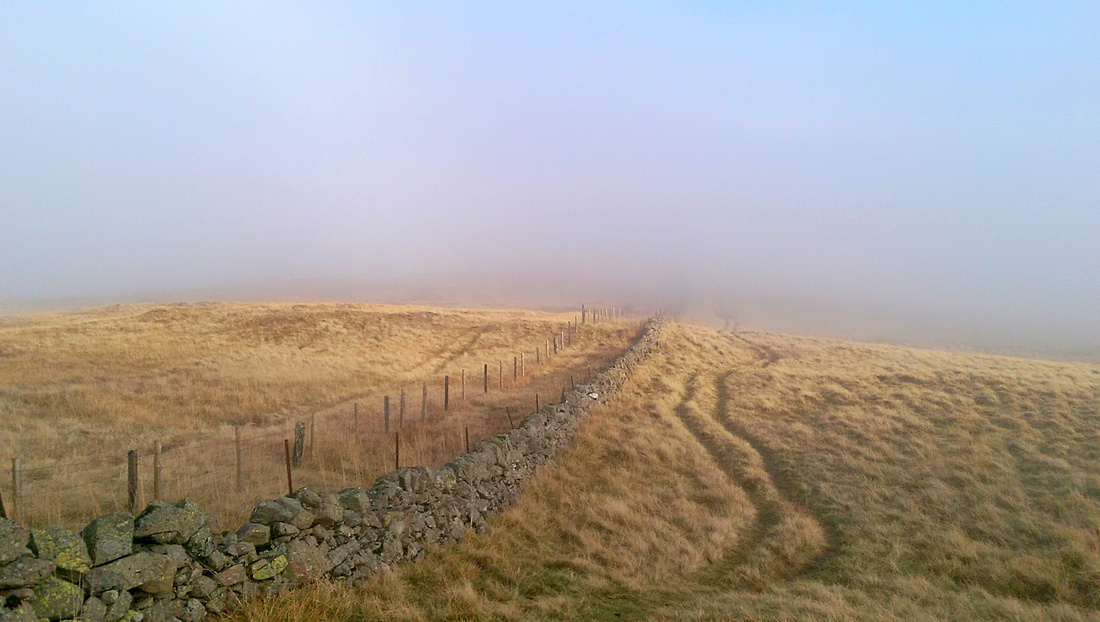 It then enveloped me, the temperature dropped and it suddenly felt like November. 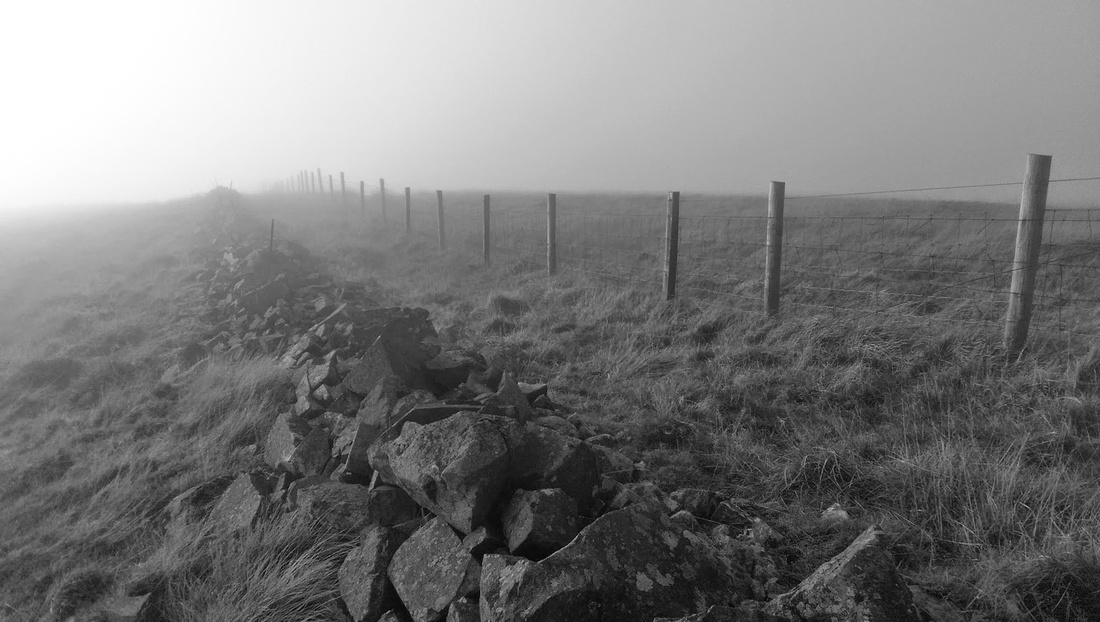 On reaching the summit cairn of Whitewisp Hill, the cloud had cleared but was slowly building up again. There were four people standing near the summit of Innerdownie.  They were the only people that I saw for the entire walk. 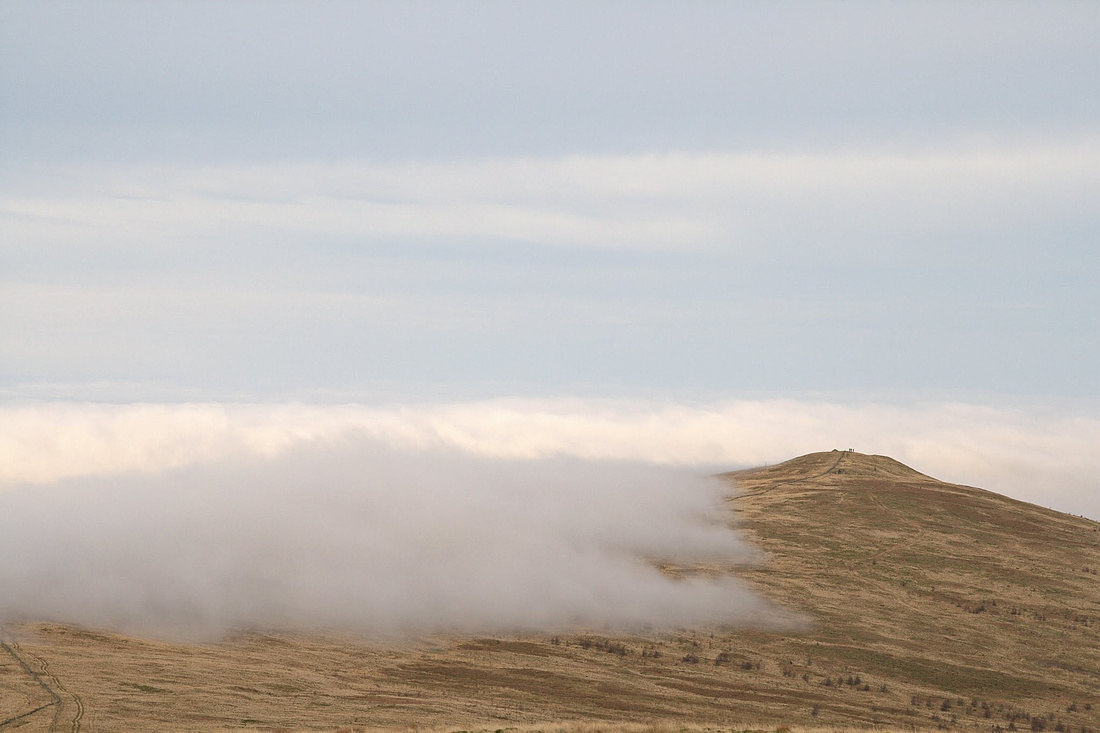 Innerdownie MeetingFour figures stand on Innerdownie, near the cairn as the cloud builds up to envelope them. They shortly after descended into the cloud and disappeared

Shortly after the above picture had been taken, the four figures disappeared over the top and descended into the cloud...I could imagine them plunging into the cold grey cloud with little visibility and it was satisfying to be standing at my vantage point with the sun on my back. It felt like they were going back to the real world whilst I stood, here with my dog above it all in splendid isolation, in an alternate reality...

Reality it was though and "zooming" about with my camera from my tripod, I managed to capture a shot of some more turbines in the distance, to the North East. 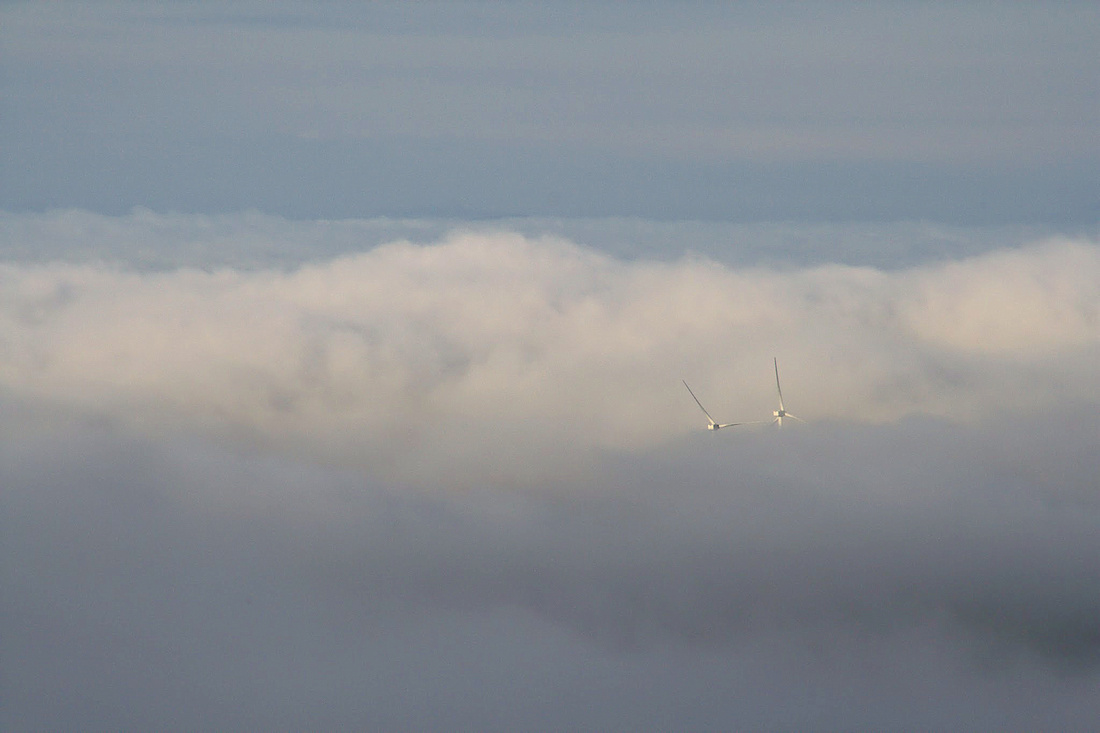 Distant Wind TurbinesThese wind turbines were captured from the top of Whitewisp Hill in the Ochil Hills, during a cloud inversion

After a few minutes, the descent began, down to Saddle Hill and the South of the Ochil's was still clear of cloud. On Saddle Hill, I caught the little gully that makes for a carefree route down and on reaching the bottom of the gully, before the sheep pen, the sun shining in the red grasses lit them up as they swayed in the gentle breeze and it caught my attention enough to stop and enjoy the ambience and warm sun. Eventually moving on to reach the path that would take me back to the Castle Campbell road, it was on that path that I caught myself humming "Perfect Day".

As I walked back down the "warm up", a short stop was also made to look at the lowering sun lighting up the old trees above Dollar Glen - a scene captured with my phone. 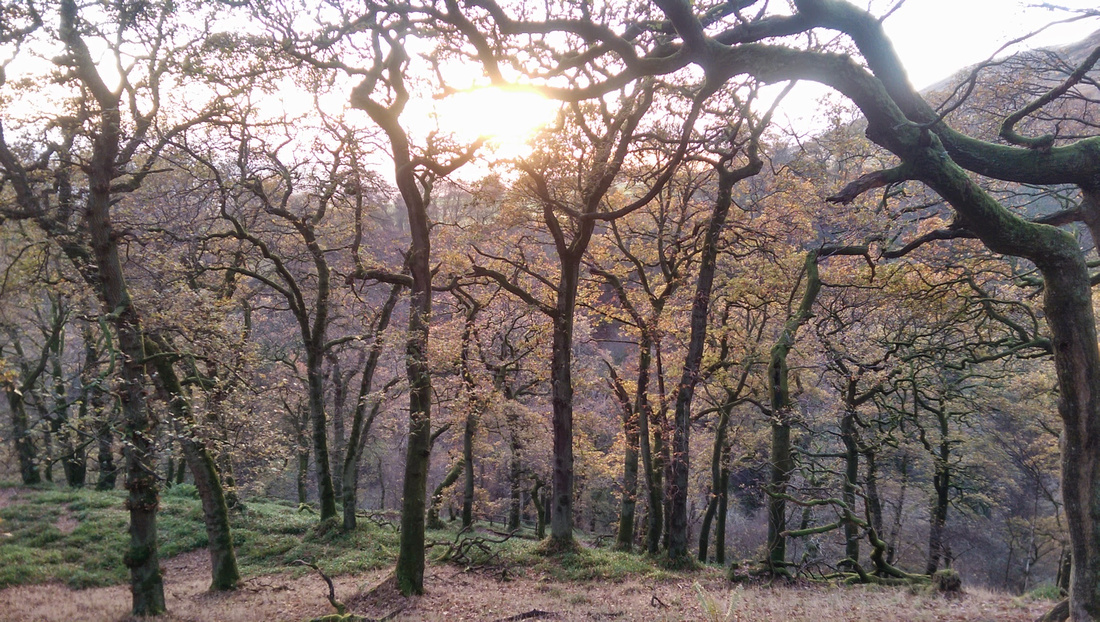 Shortly after taking this last picture, I got to where my car was parked. Digger jumped in the boot,  I jumped in the front and we drove home,  companions together who shared a great day out.