I have recently caught up with an old friend, Andy, whom I have known over 30 years! If that period of time wasn't bad enough, I had not seen him for several years so the chance to visit the Lairig Leacach Mountain bothy with him, to check it out, was certainly something to look forward to. At the last minute, my other friend and regular walking buddy Bob managed to free up his weekend and he came along to bag the Grey Corries which are the mountains above the Lairig Leacach. The plan for me and Andy was to go straight to the bothy and have a relaxing afternoon, whilst Bob disappeared, uphill to bag some tops. Being prepared for the bothy, I packed some whisky and 10kg of coal whilst Andy packed wine and some ingredients for a fine curry. A healthy weekend...with the walking.

As we left the car, I was having trouble getting my rucksack to keep the coal, it kept falling out of the straps. Andy saved the day with some bungees and he strapped them to his rucksack and proceeded to carry it up the hill. Now, this was not intentional but it made the first part of my walk very easy whilst Andy had to struggle onwards. After some time though I took my turn with the coal and I struggled the rest of the way to the bothy, stopping frequently to “look at the view”... Finally reaching our destination, I got rid of my burden and after getting used to that floating feeling you get when you take off a heavy pack, we laid out the sleeping bags so we could “bagsy” a spot on the large sleeping platform in case a load of folks turned up later. 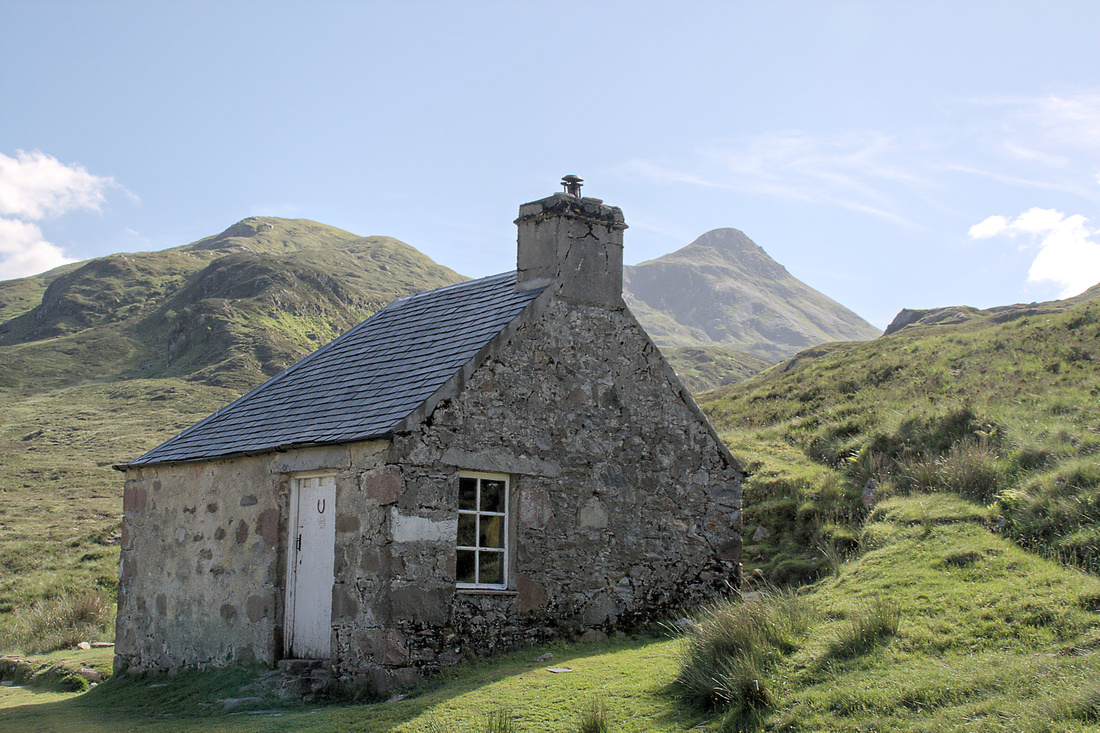 I took on water at the nearby stream and we sat in the warm sun outside the bothy catching up on things old and new. It was a beautiful day and we sat there the whole afternoon having a few cheeky drinks and talking to walkers who were passing by on their way back off the hills. We had many visitors, first of all, a herd of friendly cows came by to investigate and one, in particular, was very curious and got uncomfortably close to me and my bag full of trail mix that I was snacking on. It very slowly sidled up to me and as the cow’s nose was almost touching my face, simply moving my hand sent the large beast into retreat, which was a relief for this much smaller and feebler beast! 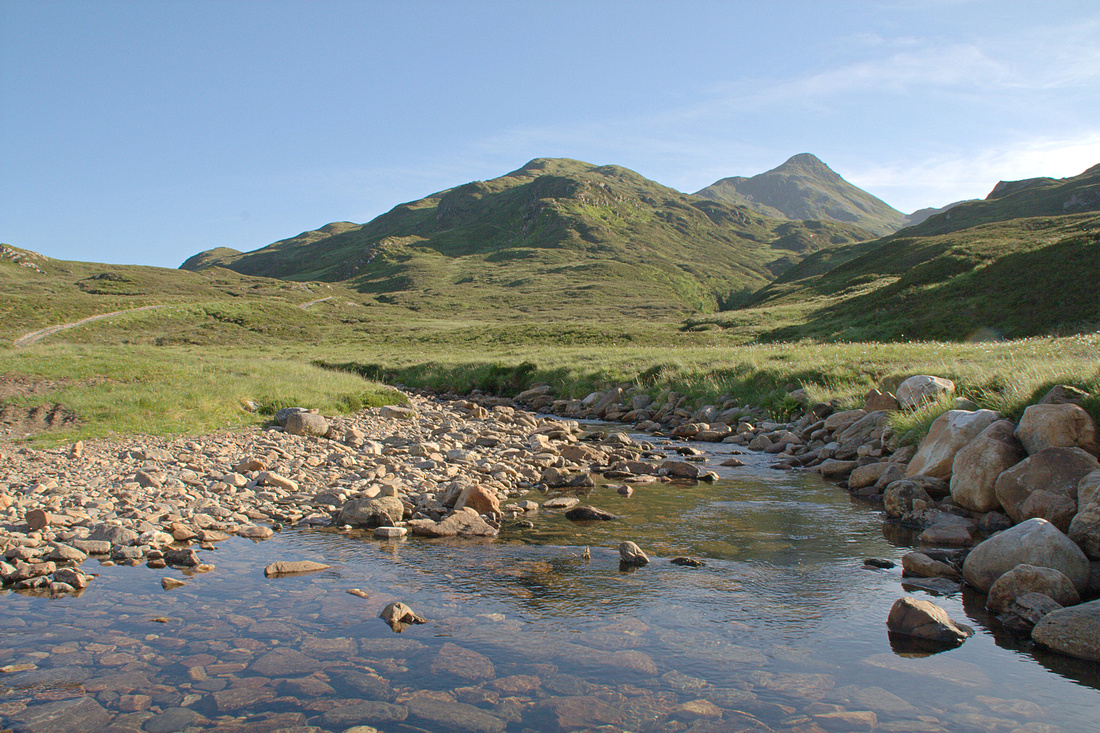 The Bothy Water SupplyThis went in my dram!

A party of twenty or so walkers later came past after descending off Stob Ban, the nearest Munro to the Bothy. Two of them had just completed climbing all the Munro’s of Scotland (if you achieve that you are known as a Compleatist) and this Compleatist celebration party sat beside us for a while talking about hills and bothies. It was a nice place to sit with the passers-by, most sat and talked with us for a while with that friendly unreserved camaraderie you get when you meet people in the hills.  It was an enjoyable afternoon of friendly chat, a few drams and sunburn.

As the hills around are quite high here the sun disappeared quite early so by teatime it was getting cold in the shade.  Andy went in to make a Paneer cheese curry whilst I went to gather some dry dead heather for kindling, taking my camera of course. 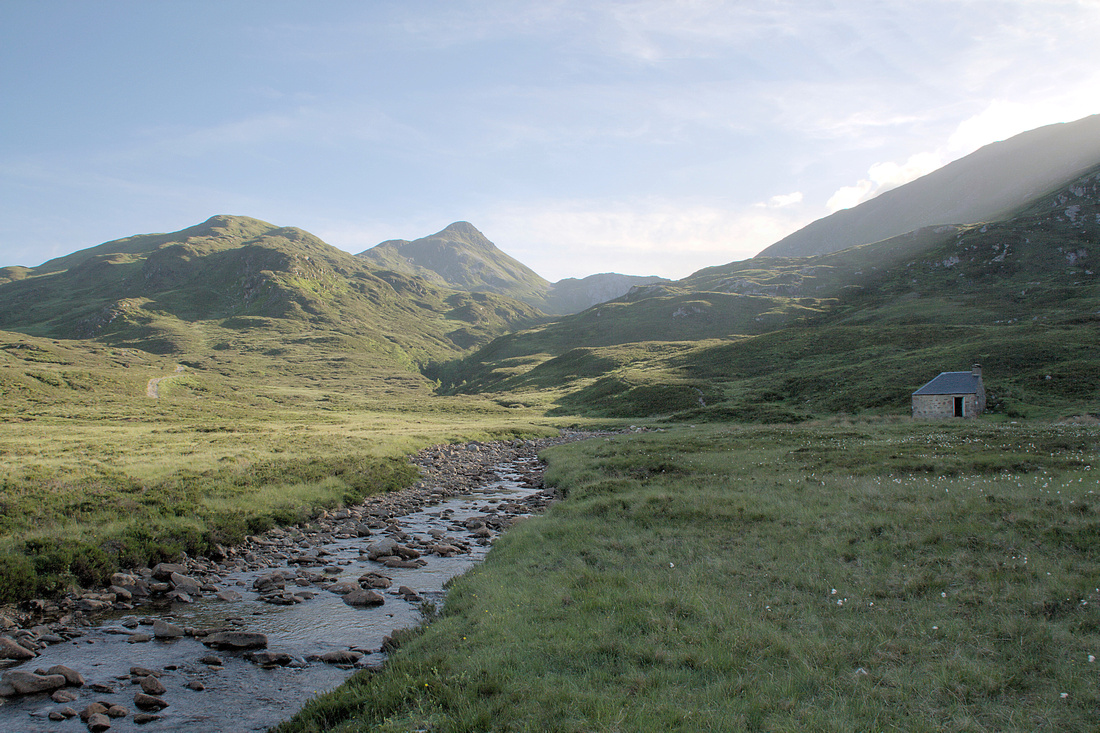 Mountain ShadowThe Lairig Leacach bothy in the shadow of Stob Coire na Ceannain. The door was open as Andy was inside making curry whilst I dodged around the bog cotton gathering some old dry heather for kindling.

It is a fantastic location, the light was not ideal for photos this time but I was in awe of the views and potential. I found some bogwood when wondering about, the remains of ancient trees and at this, I saw a walker approaching about 6 pm from Stob Ban - it was Bob. 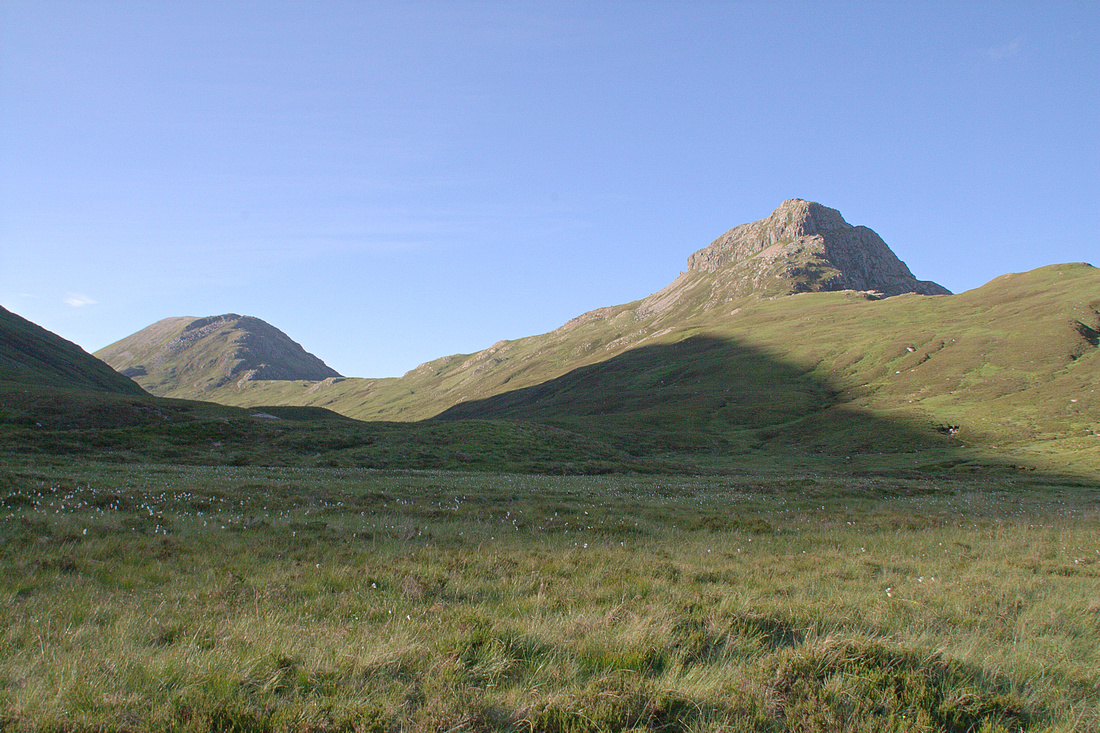 Grey Corrie ShadowsBog cotton and the shadow of Stob Coire na Ceannain with Sgurr Innse and Cruach Innse as the backdrop.

Going back to the bothy I had selfishly left Andy to make the dinner and Bob had timed his arrival perfectly as it was now ready. Good food in remote locations is certainly something to be savoured and I certainly did like that curry.

After clearing up, the fire was lit and we sat there talking, Andy had some wine, I had some whisky with burn water and Bob, the driver had just burn water after a hot dehydrating day on the hills.

Eventually, it was time to retire and a snoring competition ensued, I might even have won as I only remember waking up once. I fear though that Bob may have been the loser of this particular competition if the loss is measured in interrupted sleep…

In the morning, after breakfast, we tidied up the bothy, bagged the rubbish and swept it out. I have recently volunteered to be the joint Maintenance Organiser (MO) for the Lairig Leacach and am on a temporary appointment by the Mountain Bothy Association for now, so I wanted to visit and get to know it. 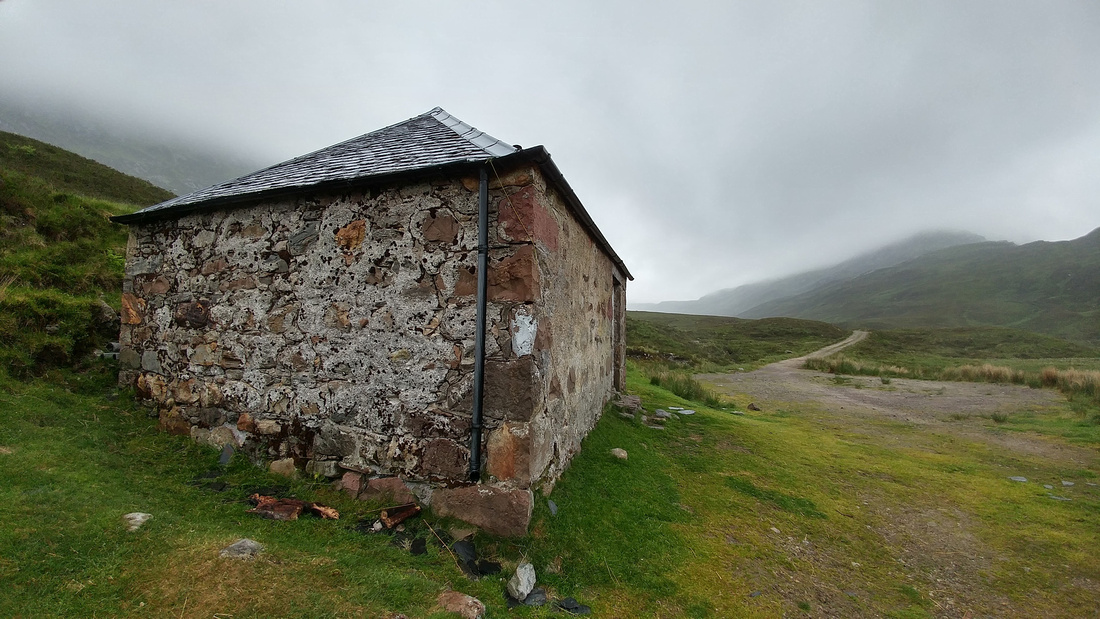 Normal Scottish WeatherIn the morning our normal weather was back and I took comfort in the fact that we will probably never go thirsty.

The weather in the morning was low cloud and it threatened to rain, so I took pictures of all elevations for future reference and then signed the bothy book before we left. I wrote “Stayed on Saturday night with friends” and signed my name. Andy then wrote underneath “We are not his friends, he rented us.” - Thanks, Andy! Looking backLooking back to the Lairig Leacach as I headed home under grey skies.

We (my rented friends and I) headed back to civilisation with me nursing a sore head due to the multitude of drams I ended up having - but at least minus a bag of coal. It was an enjoyable first visit, it was like a wee informal party to celebrate my first meeting with what may in time become a familiar place. 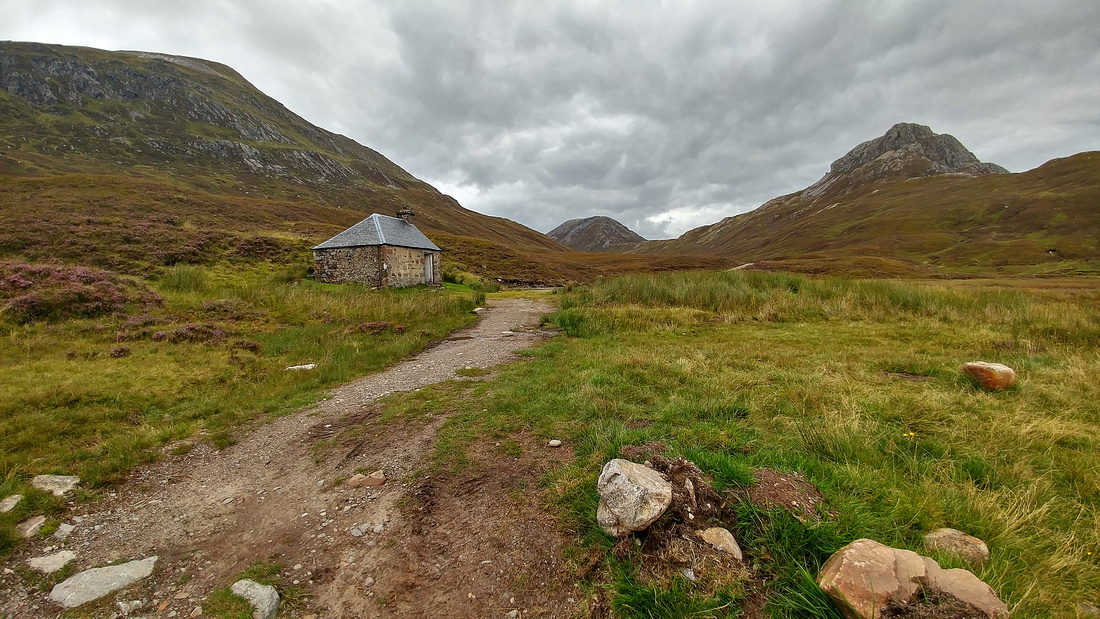 Andy P(non-registered)
Aye mate, a good wee walk out, thanks for the invite. Always good to walk with mates, talk rubbish and quaff falling over juice.
Frank Bowness(non-registered)
Sop enjoyed the story of your visit. Seems your son got his delegation abilities from his Dad! Sounds just wonderful, wish I was fit enough to go there.
No comments posted.
Loading...