From the age of three until the age of eight, I lived in a village in the Scottish Highlands called Strathpeffer. In my school years we lived outside the village in a cottage which was surrounded by woodland on one side and a pond on the other. I loved this, as my playground was ponds, trees and hills and my friends were frogs. I did not want human friends then, apart from at school, how could humans compete with frogs that have such amazing eyes and are so awfully polite!

I remember the family trips and walks we used to go on in the surrounding countryside; in particular, I fondly recall a trip from Loch Kinellan to Rogie Falls through the forest. Being in the vicinity of this place recently, I decided to relive this memory of 40 years past and do the same walk. 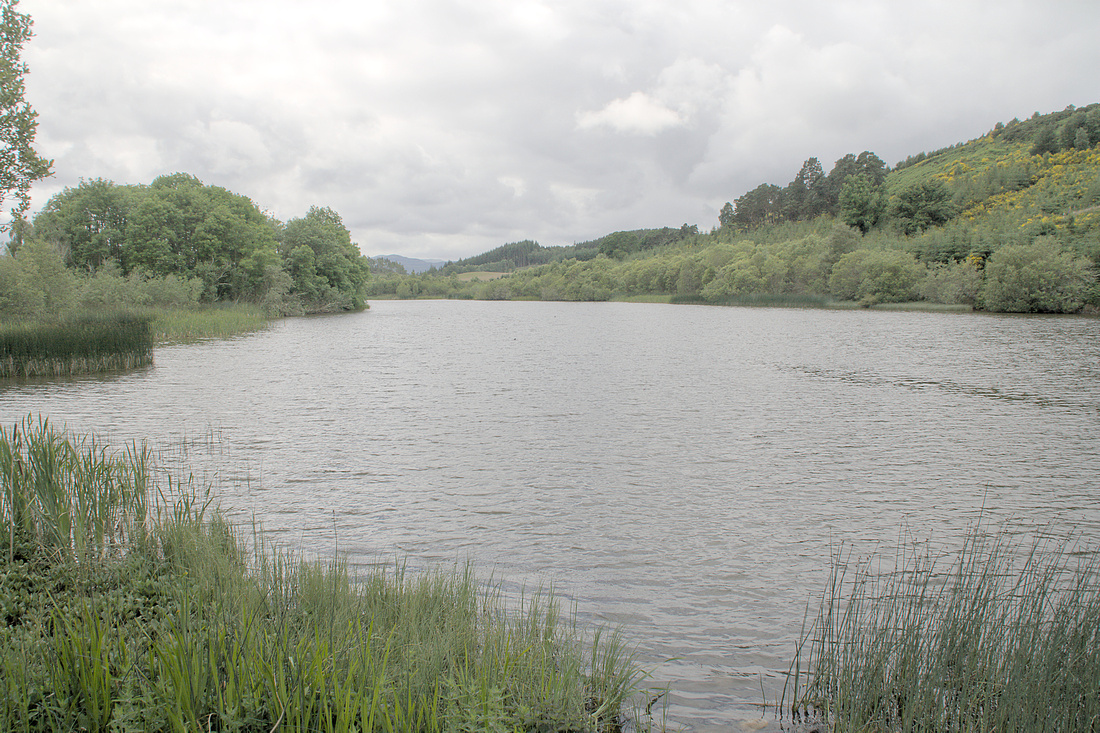 Parking my car at a fairly new purpose built car park at Loch Kinellan, the scene was strangely familiar, but it was different. The nearby working farm buildings of the ‘70s were now gone and grand residential buildings stood in their place and there are more houses dotted around this area than there used to be, they are modern and have mostly replaced the cottages and ruins that I remember. There is an island in Loch Kinellan which is overgrown with trees as grazing animals cannot reach it. This island is a Crannog, which is an artificial island which was built for defensive purposes in prehistoric times. The Crannog at Loch Kinellan has a very long history. 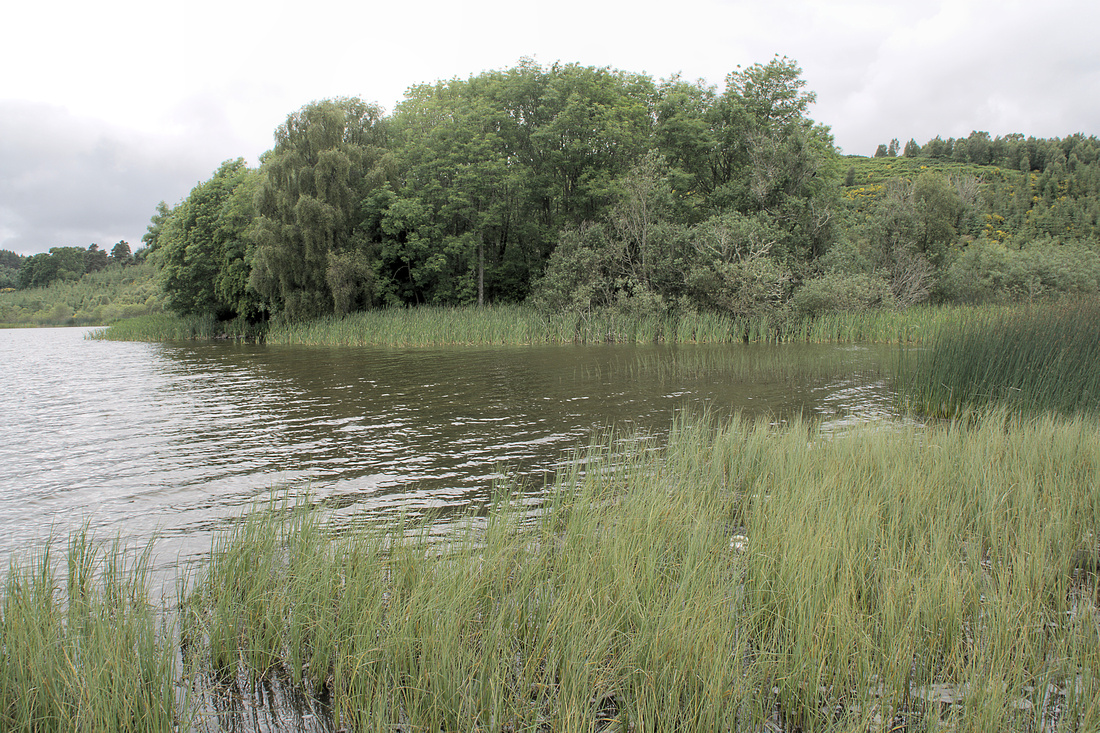 Loch Kinellan CrannogA Crannog is typically a house built on an artificial or existing island. Kinellan Crannog is understood to be wholly artificial, with signs of building from the floor of the Loch. It was used in the 15th and 16th centuries by the Earls of Ross as a hunting seat, but is likely to have been built long before that (from Strathpeffer.org).

Walking past Loch Kinellan, I headed towards the forest. As a boy I remember a good forest path where you clambered over tree roots and stones and the walk was entertaining as you felt that you were in the forest, albeit a man-made one - it still felt wild. Not so now. The path is now paved with hardcore which has been rolled flat, so it is like walking on a hard pavement. Instead of being in the forest you are now on a pavement that is surrounded on either side by trees. The paved path in my humble opinion removes you from the forest. Our roads need all the patching they can get, so it surprises me how the money is found to lay all these expensive tracks to remove future walkers from the connection with the woods and forests. 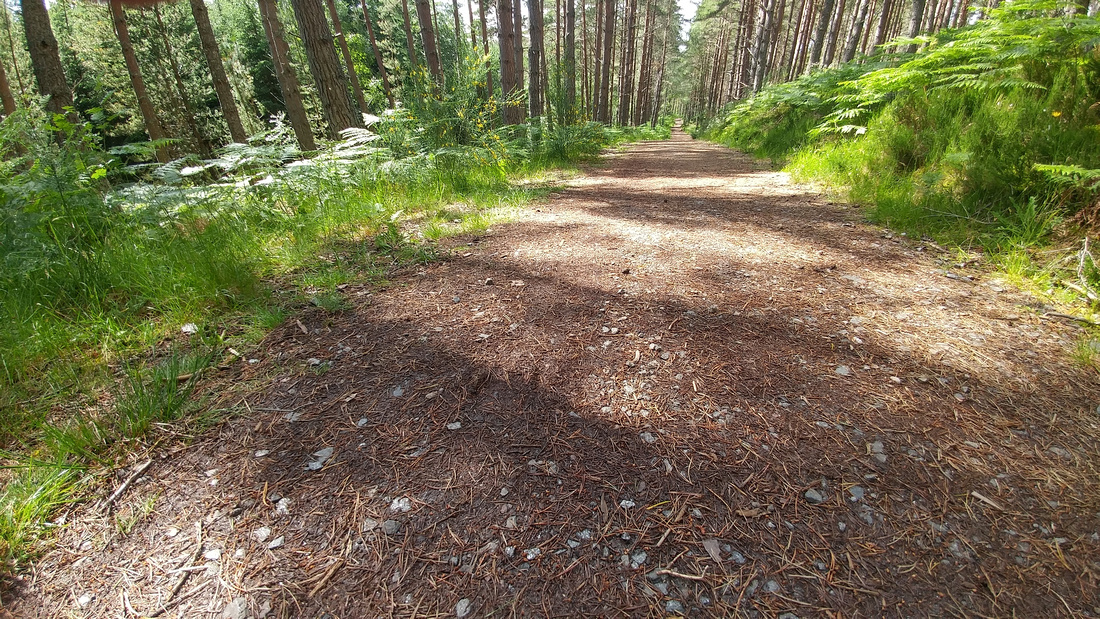 Walking on I came across a manhole in the middle of the forest and this maybe explains the need for a track as a compromise, so the hydro electric or water pipework is more accessible… A planning trade off maybe? 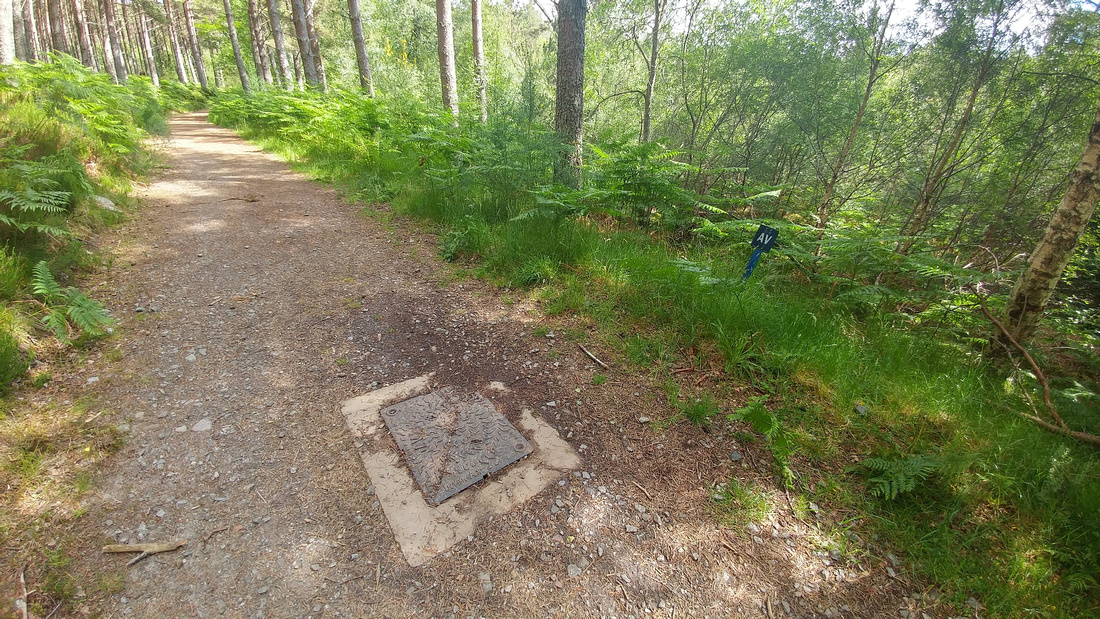 A Dirty Big ManholeThis makes the forest easier to fix ;-)

I took a diversion up to a view point above Contin, before I doubled back to visit Loch Na Craan. 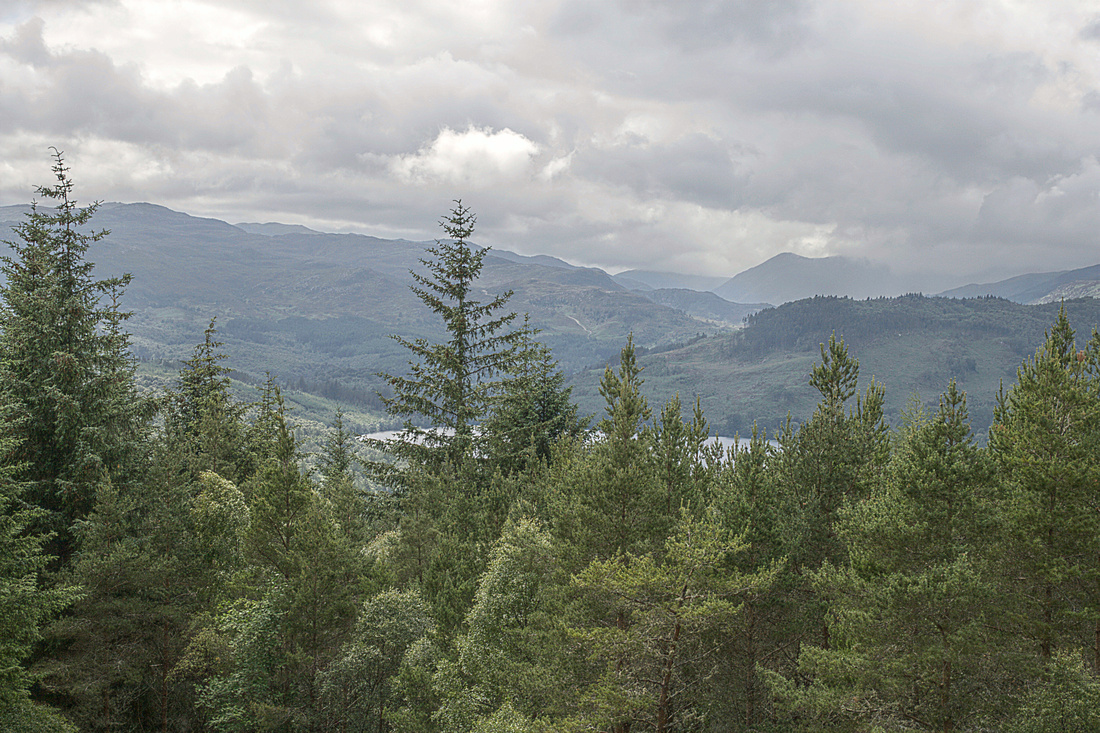 Contin ViewpointThis is accessible from the paved path...

The path to this loch was a proper but short forest path, it was an entertaining walk dodging tree roots and walking on the forest floor. The forest floor is soft and gentle on the feet and a heavy step makes a deep but gentle thud. As I walked past a fallen tree, a couple of Chaffinches sat there cheaping, impervious to my passing and with the wind in the trees I finally felt that connection with the forest that the wide pavement had stolen from me. 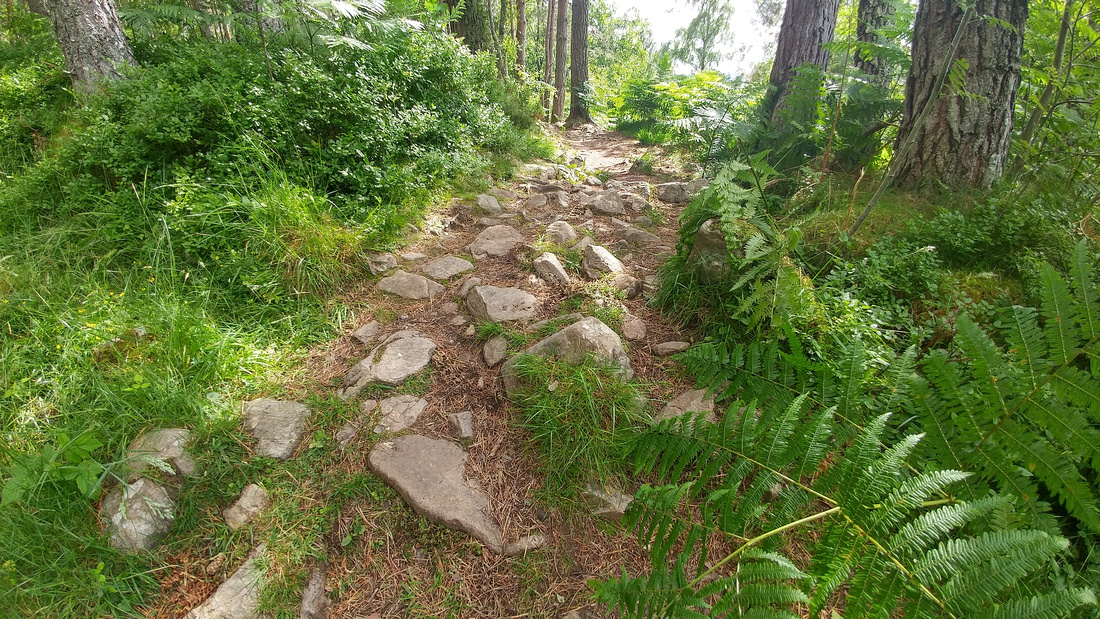 A Proper Forest PathIt is much more enjoyable to walk on a path like this, how I remember it :)

I reached Loch Na Craan and was confronted with an old boat house and a highland loch that was unusually covered in white water lilies. It was quite a sight and a pleasure to discover. Walking around the loch I discovered that it was dammed so man’s hand has played a part here too... 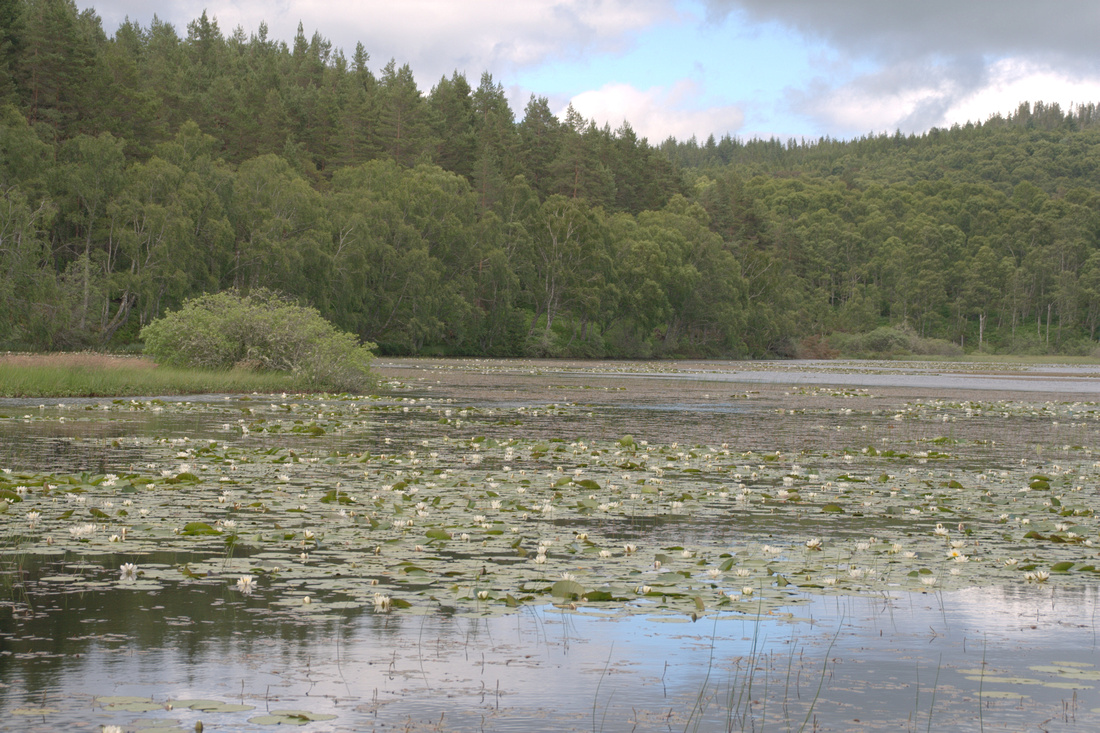 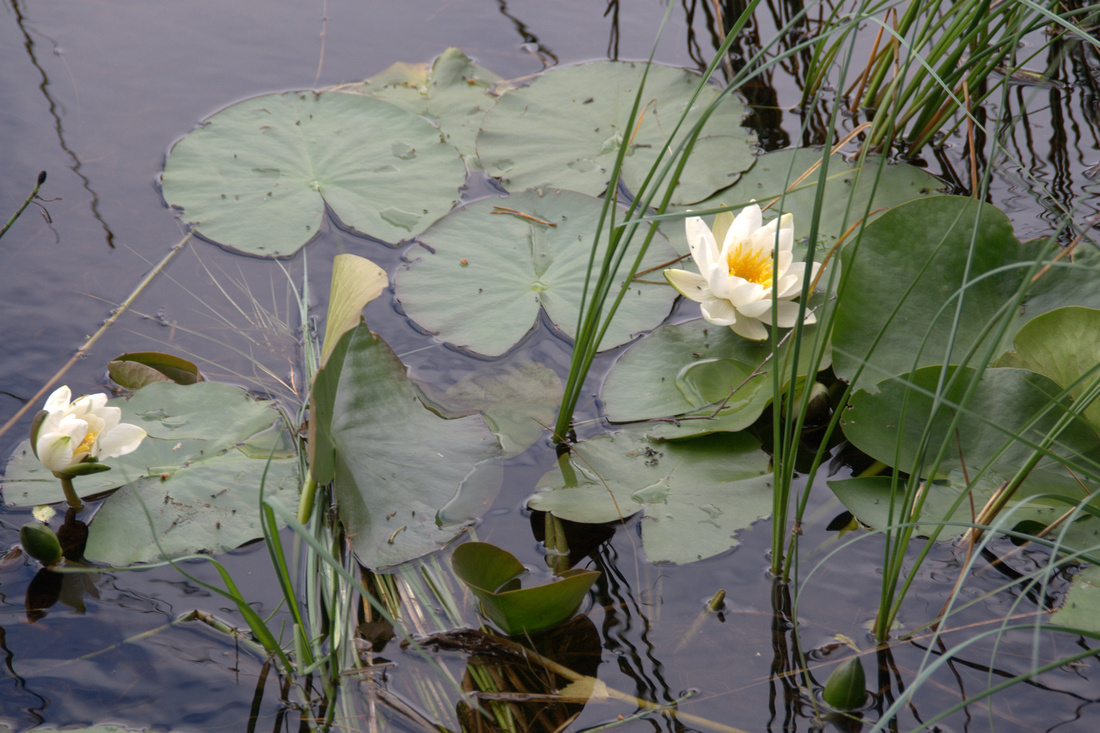 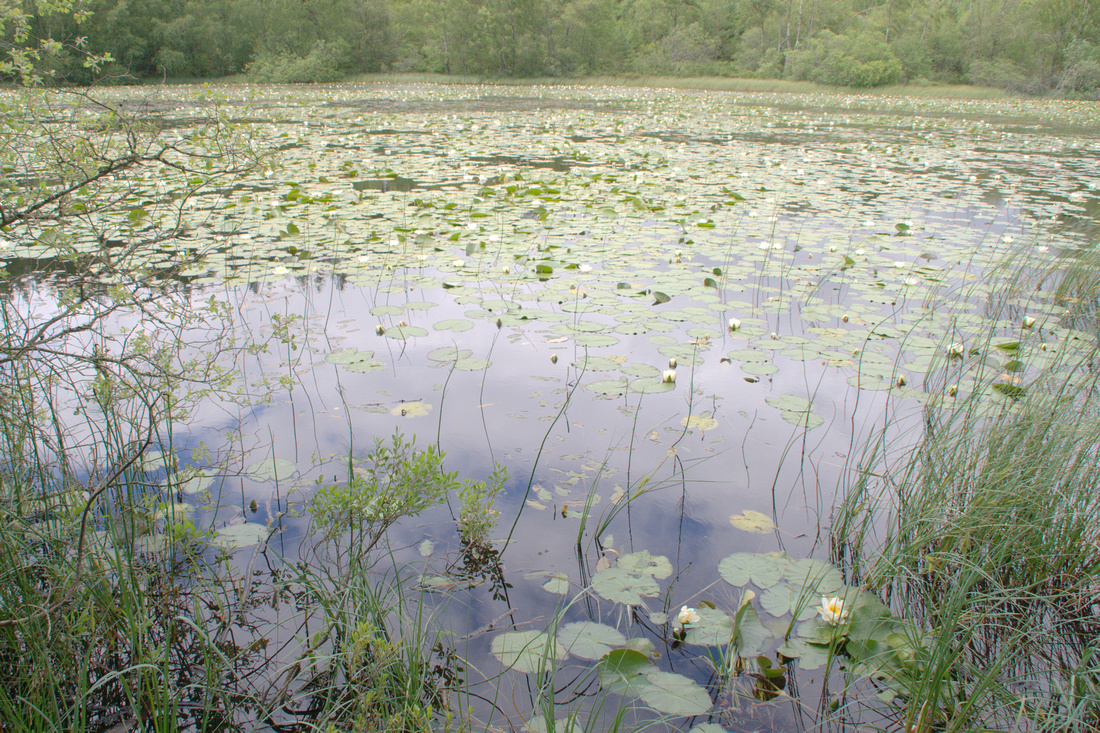 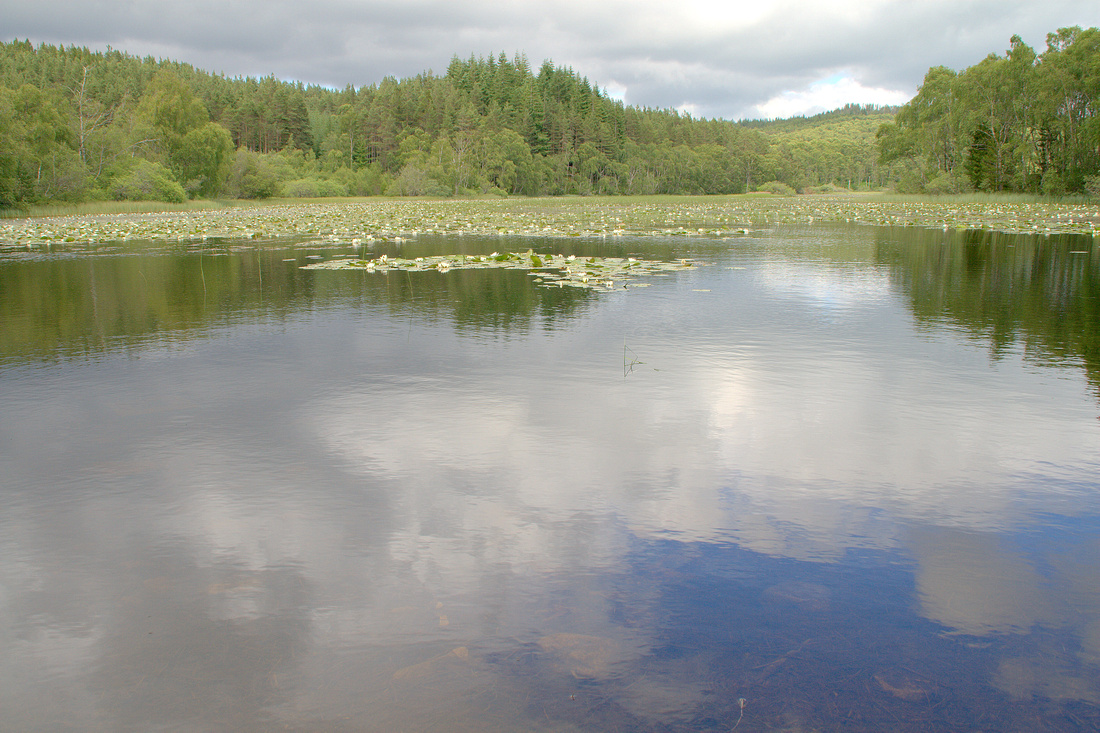 I headed onwards towards Rogie falls, taking a couple of km diversion down a proper forest path that was signposted as a river walk.This route took me downhill to the river, called Black Water, near Contin. I took some pictures from viewpoints from this path and on the way to Rogie Falls. 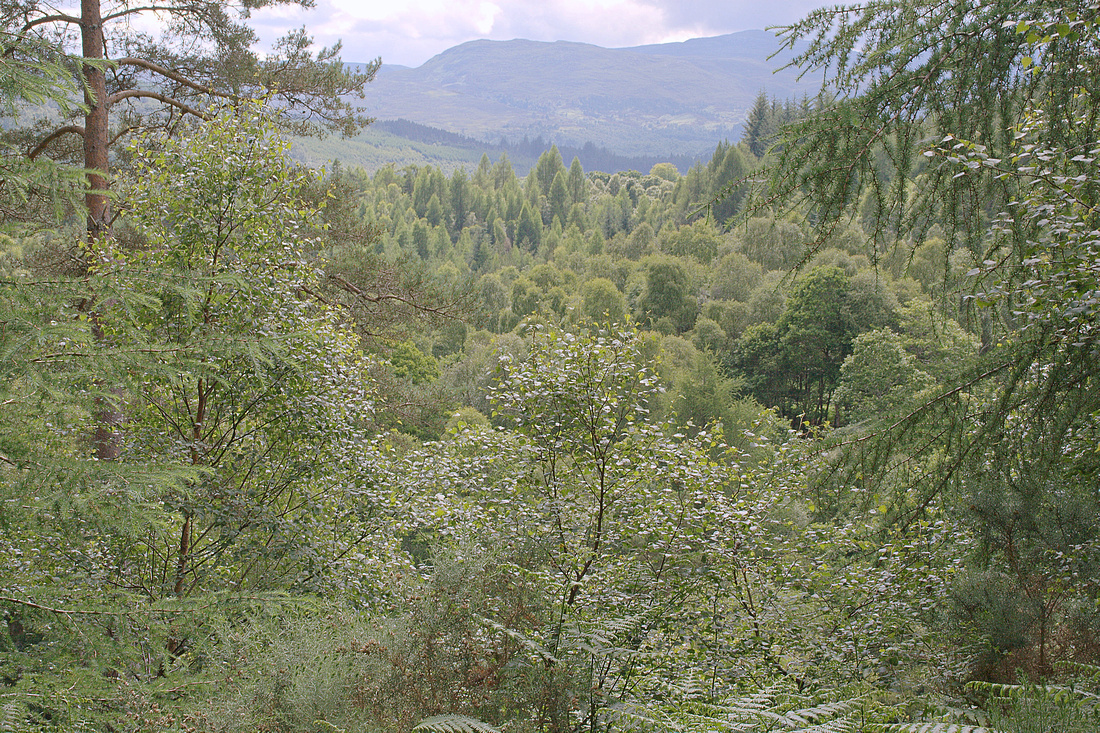 The March of the TreesTaken on the way to Rogie Falls 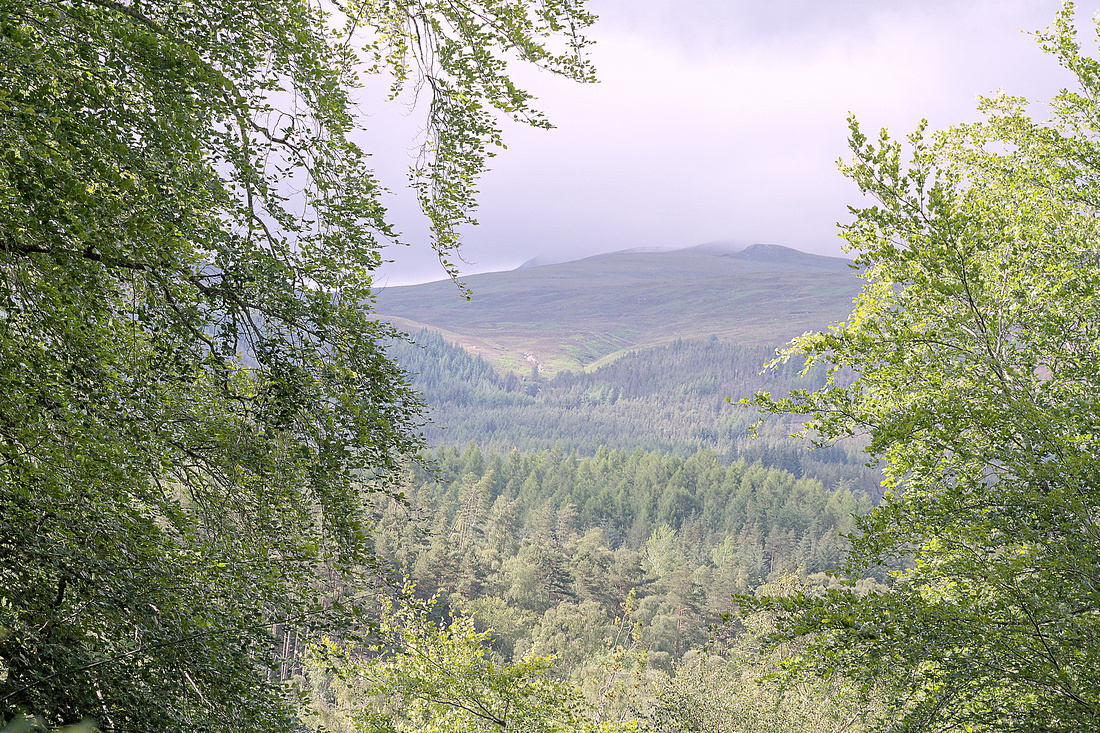 Just before reaching my destination, I passed this magnificent tree that needed to be captured! 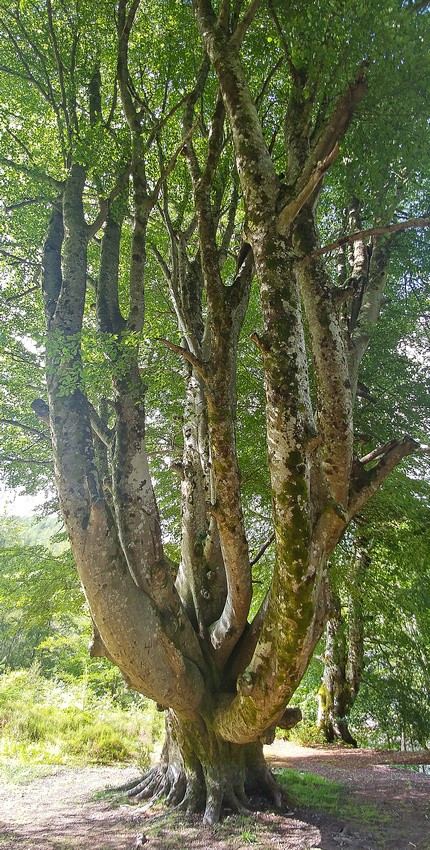 Big Tree at Rogie FallsI have a thing for unusual trees and had to capture this one.

At the suspension bridge (there was a bridge here 40 years ago!) above Black Water, I joined the crowd watching the salmon trying to jump Rogie Falls 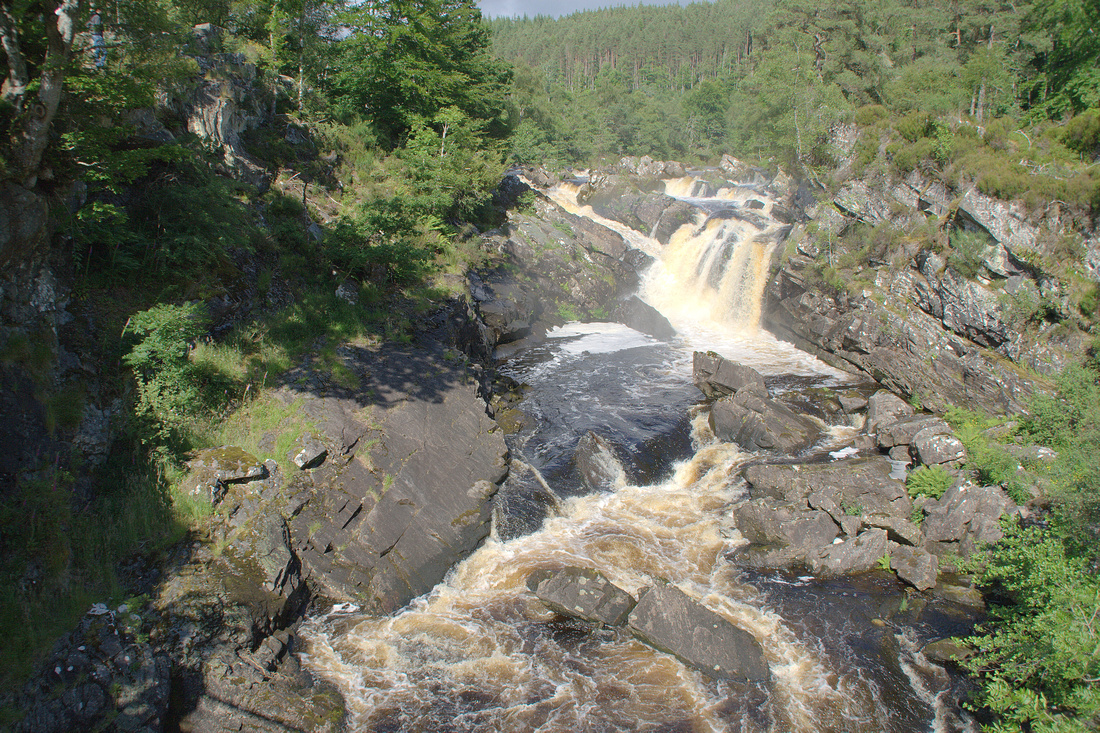 Rogie FallsRogie falls on the river Black Water. The water is black as it comes from the peaty moorland on Ben Wyvis

I missed a few good chances but eventually managed to photograph a couple of salmon jumping. 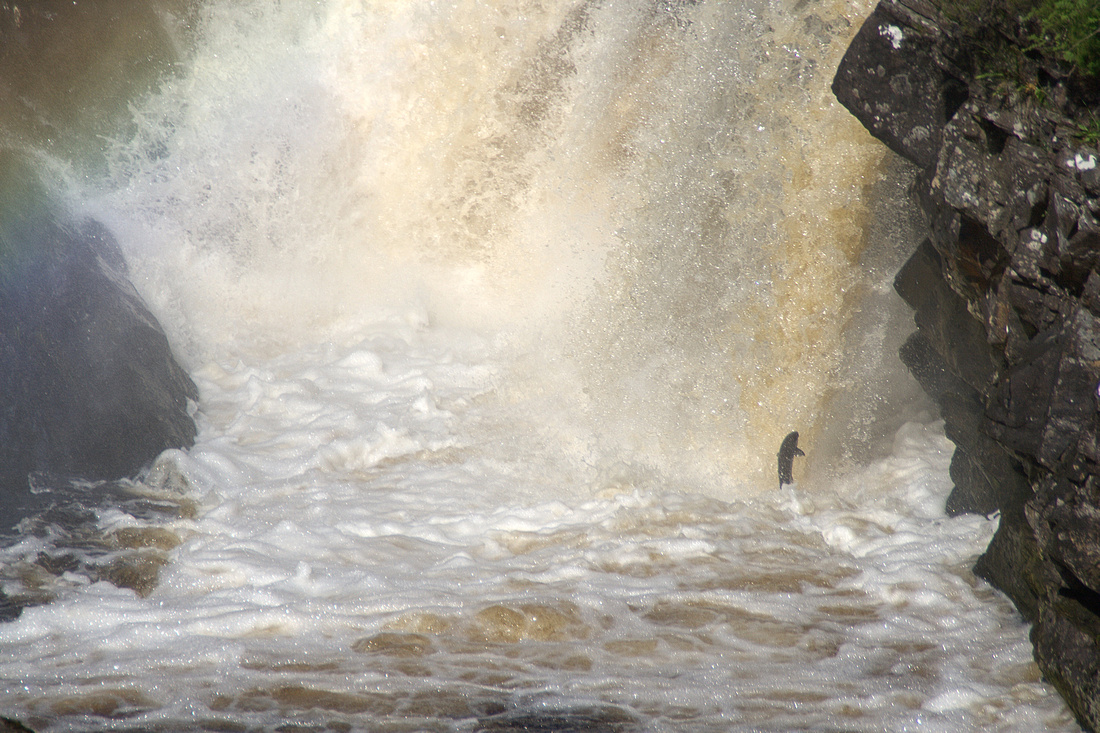 Salmon Jumping at Rogie FallsThis salmon was captured as it fell back in the water. 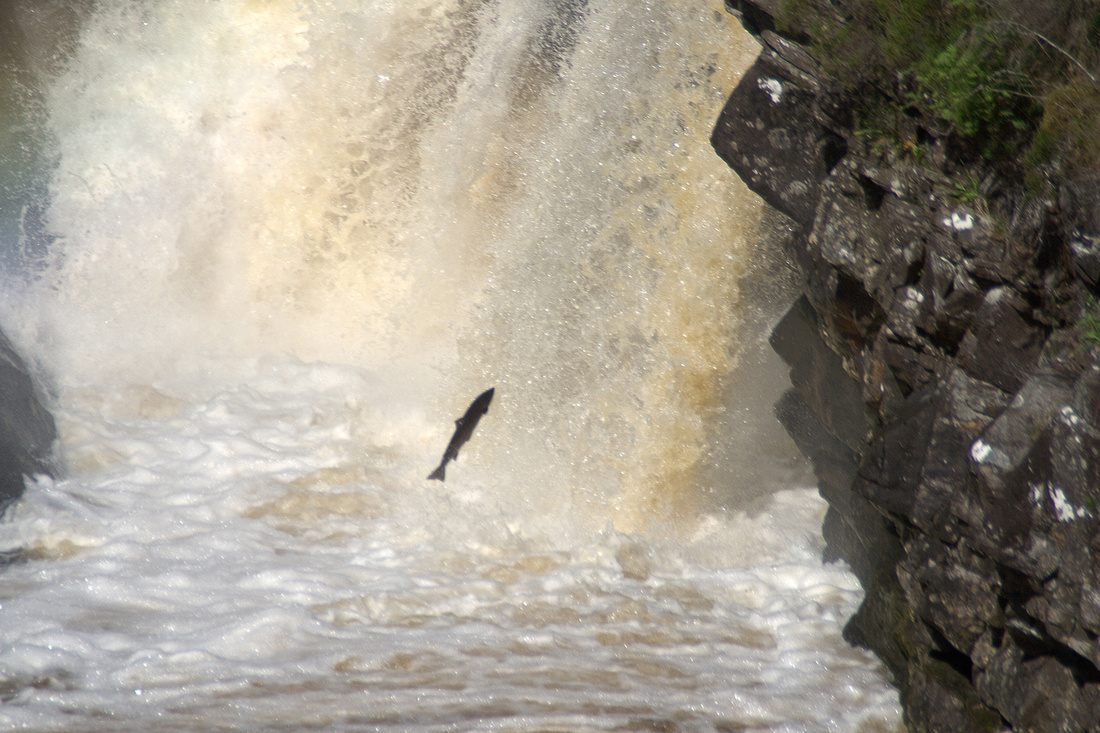 Salmon Leaping Rogie FallsThis salmon leapt very high but failed to clear the falls (it was short). I managed to capture it as it came back down.

It is hard to capture them jumping and would take organisation and patience to get a good picture of this annual migration. It is a pleasure and privilege to watch these fish jump such amazing heights, as I remember doing 40 years ago. If anything there seemed to be more fish now than what I remember back then. The salmon were leaping every few minutes, sometimes one of their attempts would encourage others to try to jump the falls too, so you would see a few of them in quick succession. There is a fish ladder nearby, but they seem to miss it and tackle the big obstacle head on!

I could have spent much more time with this spectator sport but had to head back. As I climbed the hill heading away from the falls, I could hear the audience on the bridge cheer and I knew had probably missed a photo opportunity - I wondered whether a salmon had succeeded in beating the falls.

I walked back to loch Kinellan and finally reached my car. I consoled myself that I had experienced this area in slightly wilder times. It was still nice here, but the creep of urbanisation was apparent in places and my memories of 40 years past were now more precious. 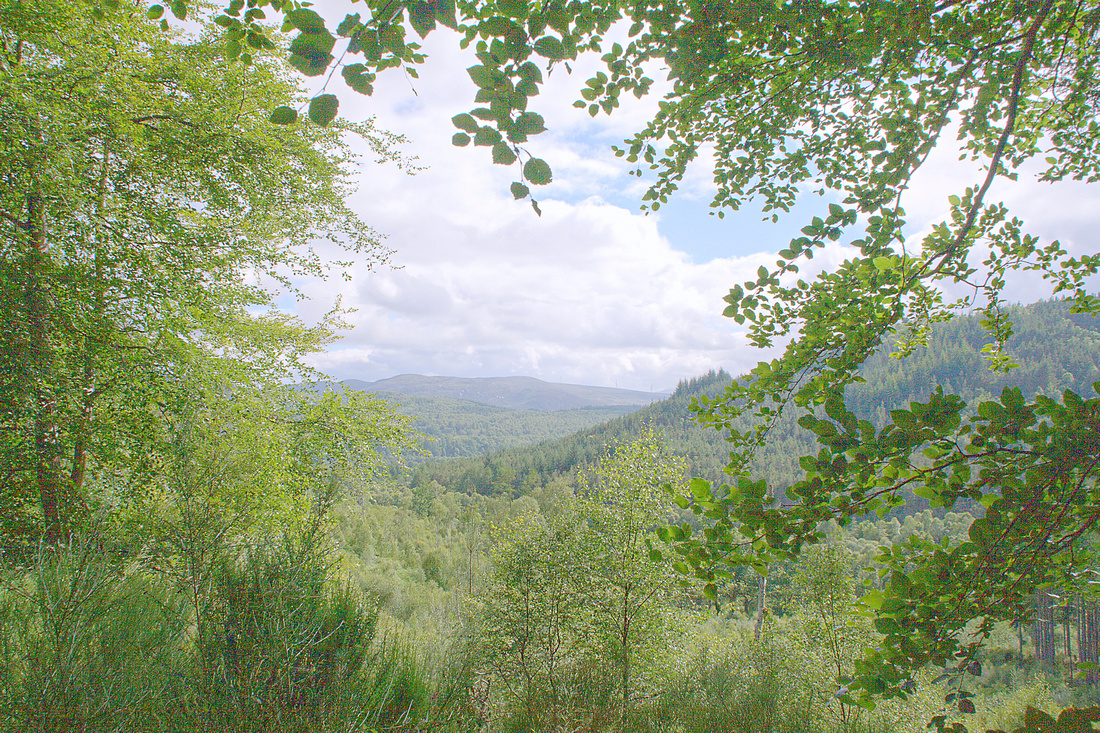 From Within the ForestA great view through the trees