A Bothy By The Sea

Please note as of October 2020, Peanmeanach bothy is now locked and is no longer accessible to the public.

The sweet smell of wood smoke greeted me as I opened the door and stepped inside Peanmeanach bothy on the Ardnish Peninsula. The residual smell of the many fires that have been burnt in the building’s two fireplaces, made me think of all the visitors who have stayed in this fine place. Peanmeanach bothy, which is maintained by the Mountain Bothies Association, is the only habitable building in a village of ruins. These ruins betray the now empty Peninsula to when around 50 residents lived in Peanmeanach village in the 19th century. I have read somewhere that Ardnish was cleared of people around the second world war, so that the peninsula could be used for training special forces. Other sources describe how the population had declined over time, as the residents had a hard life with the landowners of those times showing little interest in their self-sufficient and therefore unprofitable tenants. I had arrived here with my friends Bob and Andy, we had completed a 3 ½ hour drive and a further two hour walk over rough ground to cover the three miles from where we had parked to reach Peanmeanach. The walk took in some beautiful views of the Islands Rum and Eigg as well as some snow tipped mountains. Andy had the misfortune to step in a muddy puddle on the way that turned out to be a waist deep swamp. After he had managed to pull himself out, he had to walk for a rather uncomfortable hour until we reached the bothy. Loch DubhWe passed by this loch on the way to Penmeanach. This was taken by the rail bridge.

The Isles of Eigg and RumThe unusual island of Eigg can be seen in the distance, behind it the snow covered mountains on the island of Rum. We had the bothy to ourselves, we set up our bedding on the sleeping platform in the small ground floor room and then went out to gather fallen wood from the old forests so there would be plenty of fuel. We had also carried in 10 kg of coal, but it is an unspoken bothy custom to gather wood (if possible) so you can leave it for the next visitor who may be in dire need of shelter and warmth. After gathering fuel I went down to the beach to catch the sunset where I realised that there is a multitude of mussels on the rocks - If there is a next time and I ever return, I will be having mussels for my evening meal! 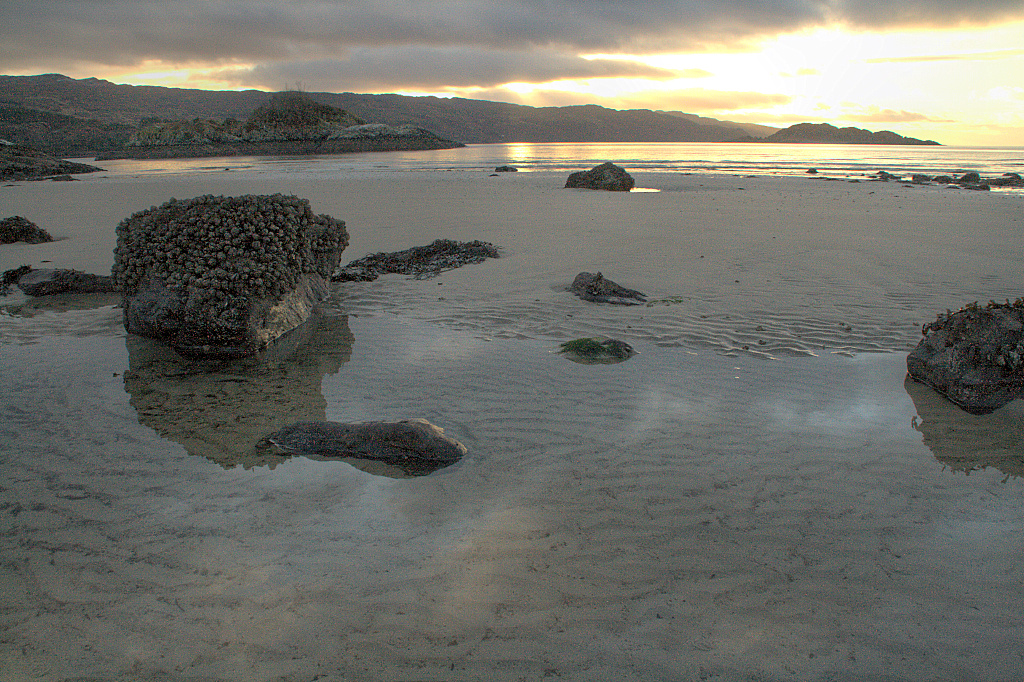 Peanmeanach SunsetThe clouds start to cover the setting sun, in the foreground the rocks are covered in Mussels 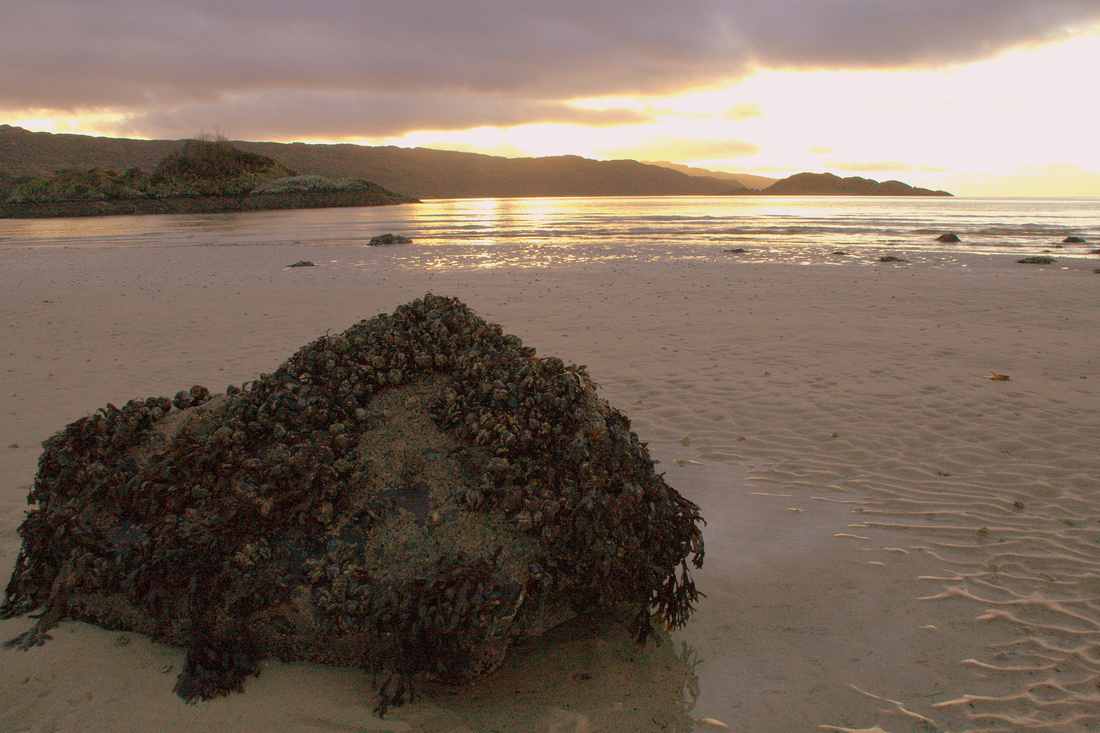 Last lookThe sun quickly peeks out from between the clouds, before disappearing for the night

After sunset we lit the fire and had our dinner, the bothy quickly warmed up and the drink flowed freely. I had bought whisky, which is perfect beside an open fire as it tastes like the fire smells. The abundance of whisky however forced me to retire to my sleeping bag early with Bob and Andy shaking their heads at the state of me! Next time I will bring less... I awoke at 6am to the pitter patter of rain on the tin roof of the bothy. The weather had changed for the worse, wet and foggy, but it was also warmer, causing the hill snow to rapidly thaw and swell the water courses. After breakfast we packed our things and tidied up. We then headed for home through the dark misty landscape, wading the swollen burn and squelching in the sodden earth. On reaching the car, we were soaked, but, we were also richer for having made the journey. Footnote: I apologise for the pictures. I found out when I got home that my camera was on a very high ISO, hence the grainy nature!