It was lunchtime on Friday. I was on my lunch break at work and was contemplating what I could do on Saturday. I looked at the weather forecast for Stirling; "mist in the morning", it said. “Yes!” I said, as that meant that there was a chance I could climb the Ochils above the fog and take some photos.

I was planning for an early start to catch the good light but I awoke at 9am, so scuppered my chances of that! It was however still foggy outside... After the necessary coffee and faffing about, I took a foggy drive and arrived at the Ochil Hills Woodland Park car park just before 11am. I headed up Wood HIll as I had not been above the cloud on this hill before. I started the climb up through the woods and near the top of the woodland area I started to see the sun breaking through - luck was with me! 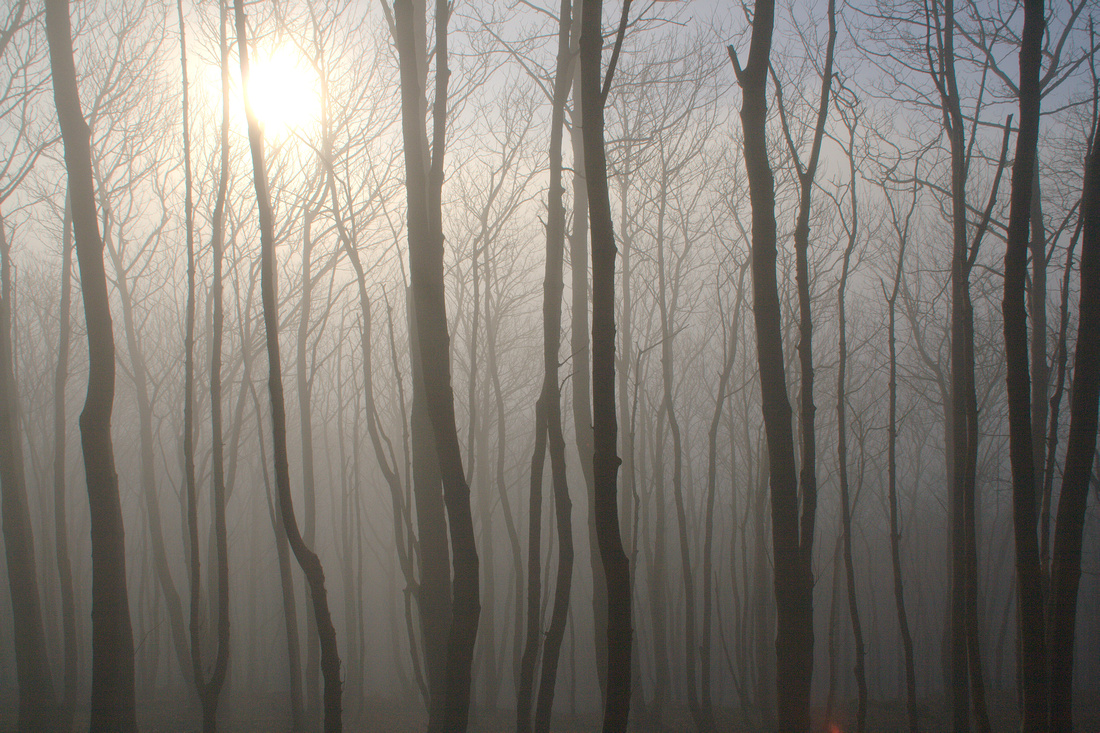 The Sun AppearsSeeing the sun meant that I was reaching the end of my woodland climb in the cold fog.

The fog started to thin about the 250 metre mark, views started to appear and I emerged from the oppressive dank mist into the sunny landscape with a braw blue sky. The transition was beautiful and other worldly. 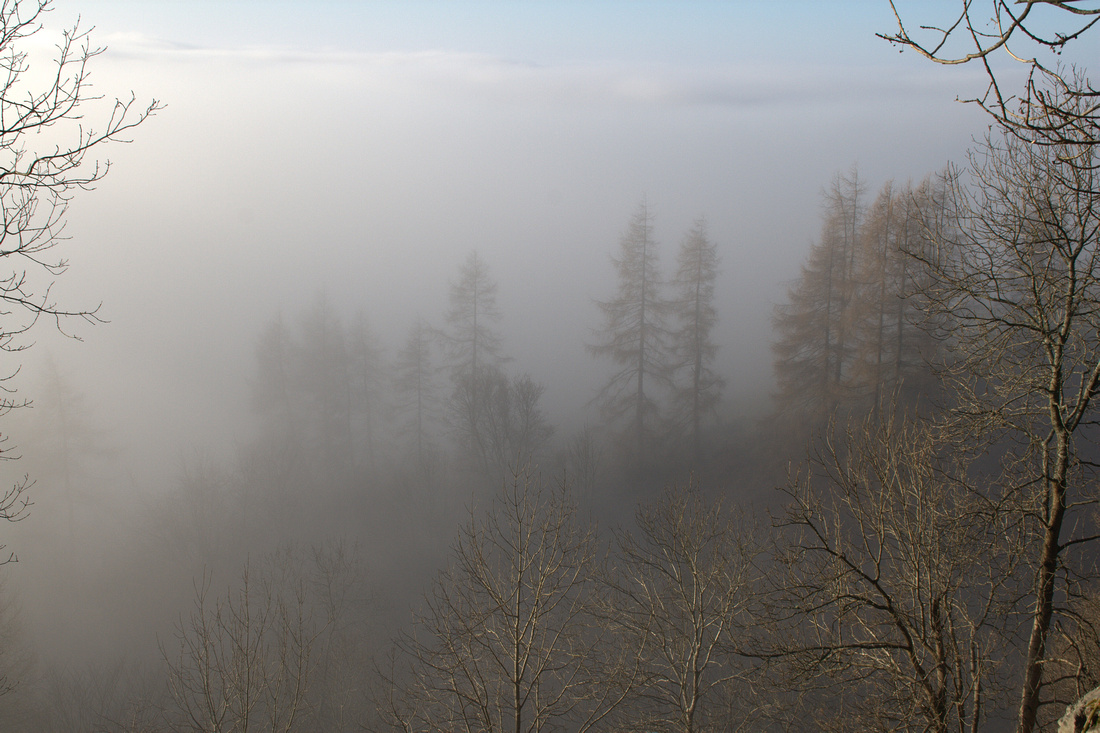 EscapeLeaving the fog and emerging into a beautiful sunny day.

Climbing up through the trees, I took ages to gain height due to the amount of pictures that were being taken. Digger was frequently sighing as he always does when I stop to take pictures - That dog hates standing about! 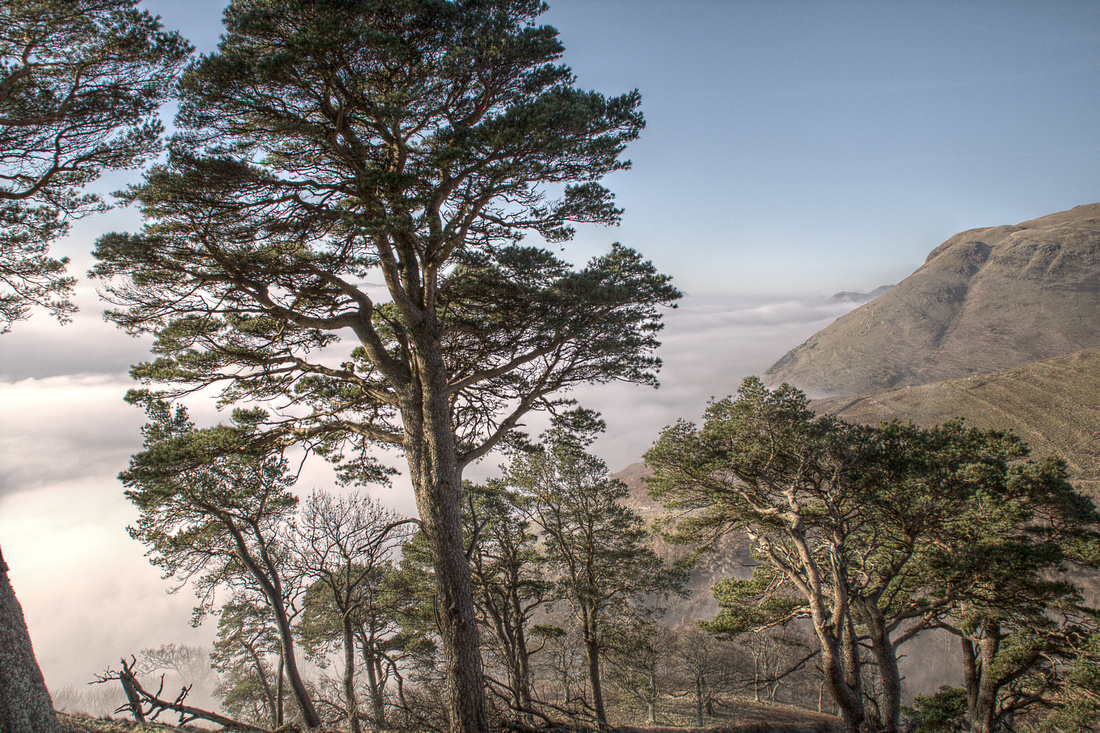 As I moved up the hill, a man caught up with me, it is rare to see another walker here and we talked about the charms of Wood hill and the Ochils in general. He told me he has been walking the Ochils since 1972 - He also told me he was originally from Ireland where he lived beside the Mountains of Mourne; that is a place I would love to see. The man explained that the Mountains of Mourne, although higher, had a similar character to the Ochils. He also told me that when he comes this way, he always checks on a fallen tree that has laid on its side since he first came here 45 years ago - every year he checks it and every year leaves still appear.

The man seemed taken aback at my lack of ambition to walk further afield than just Wood Hill, he seemed to be planning a jaunt over Ben Cleuch and back down the Law into Tillicoutry (near Stirling!). I however just love to stand about and take scenery pictures when on my own in such grand conditions. The man then took off up the hill at an impressive pace for someone at least 10 years my senior - He would have left me behind in a race! 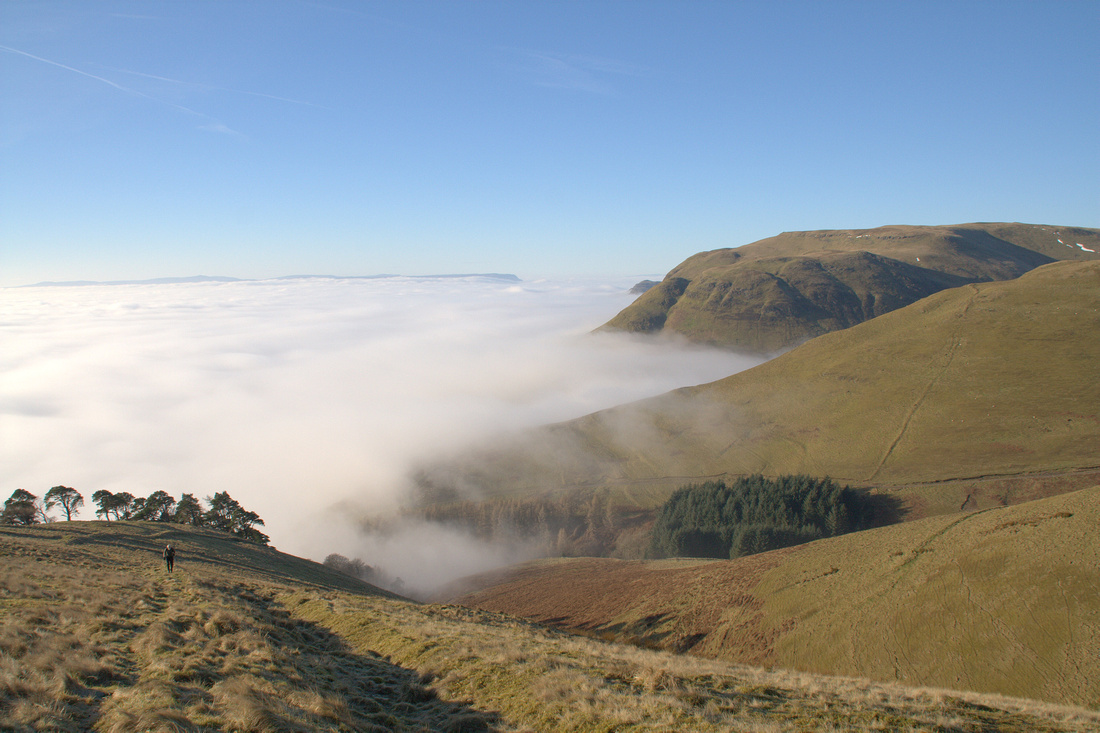 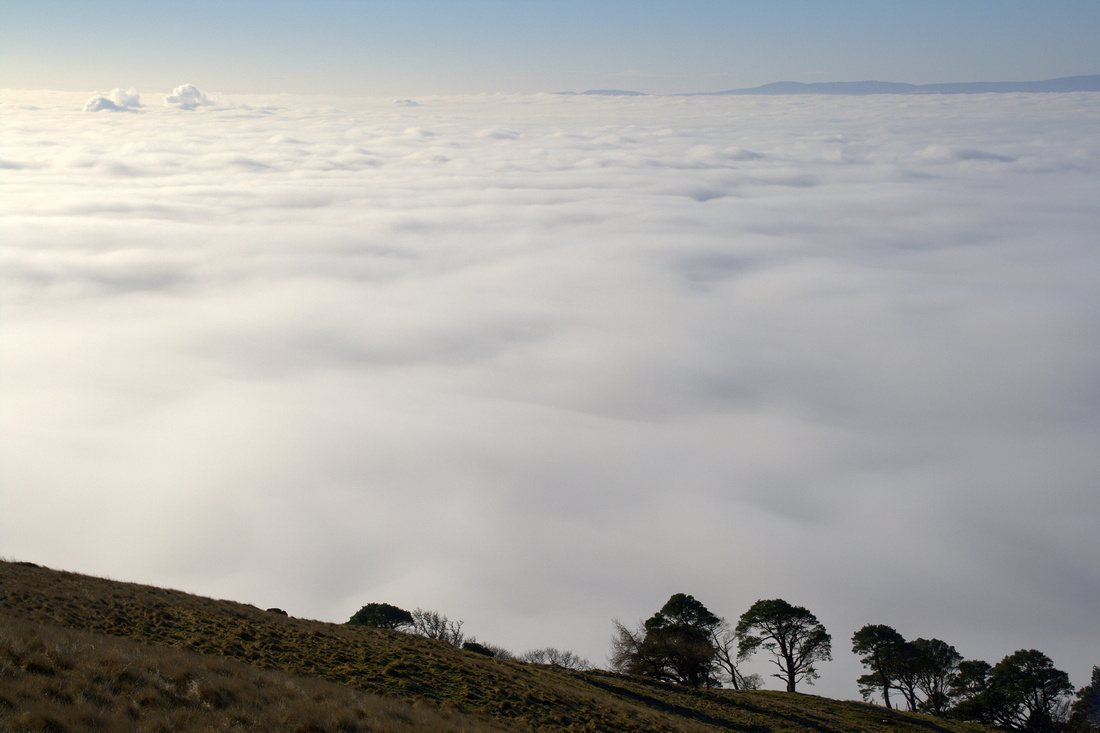 Above the CloudsWood Hill, Ochil Hills

I slowly headed up to the top of Wood Hill (in my opinion), Rough Knowles, which has a pond on the summit plateau that Digger always drinks from and is 525 metres above the Forth Estuary in the valley below. This means I had climbed 475 metres from where my car was parked and I was looking down on the fog about ~300 metres below me. It was a glorious sunny day up here, not the frosty foggy day everyone below in the gloom was getting. I understood now, standing in the warm sunshine, why the foggy occurrence is called a temperature inversion. 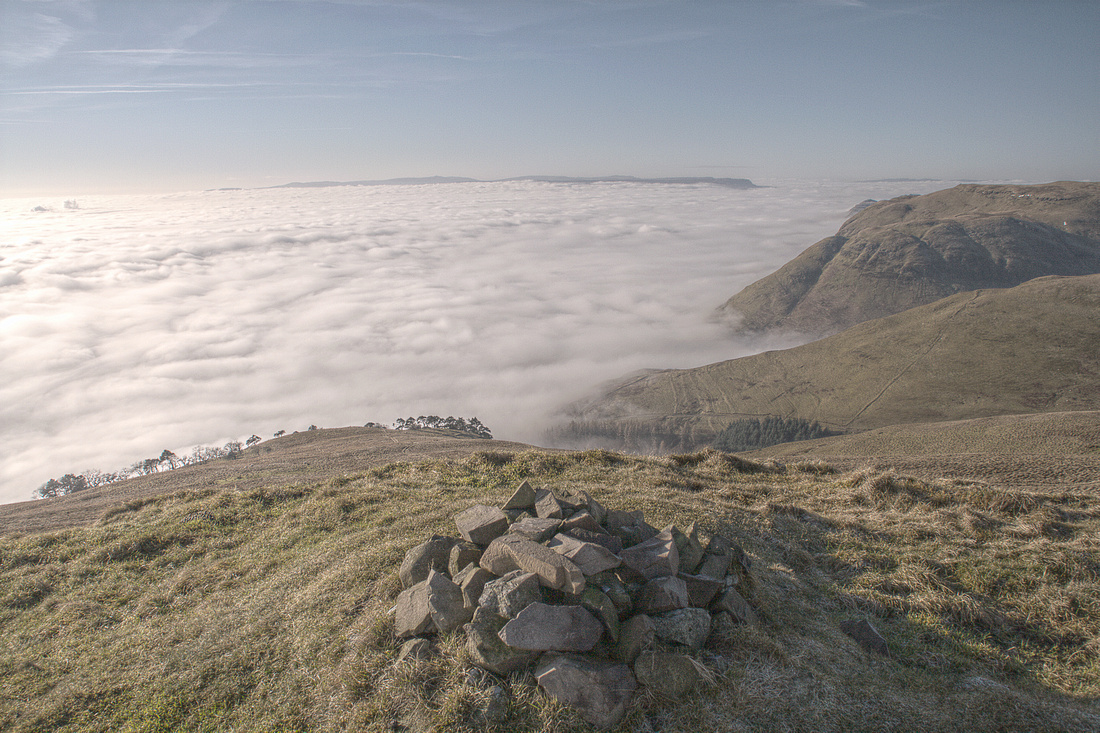 From this vantage point I dropped down towards the treeline on the East side of Wood Hill that is fenced off from the sheep.  I then followed the fence westwards snapping away merrily from the steep slopes above the fog. 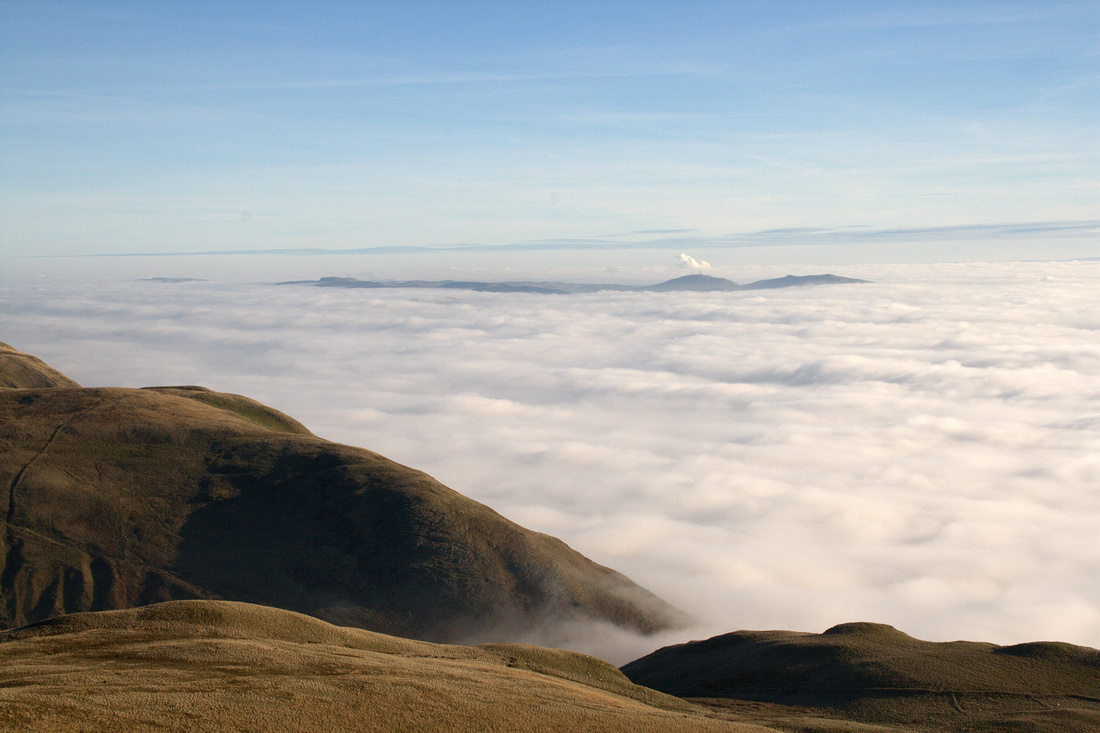 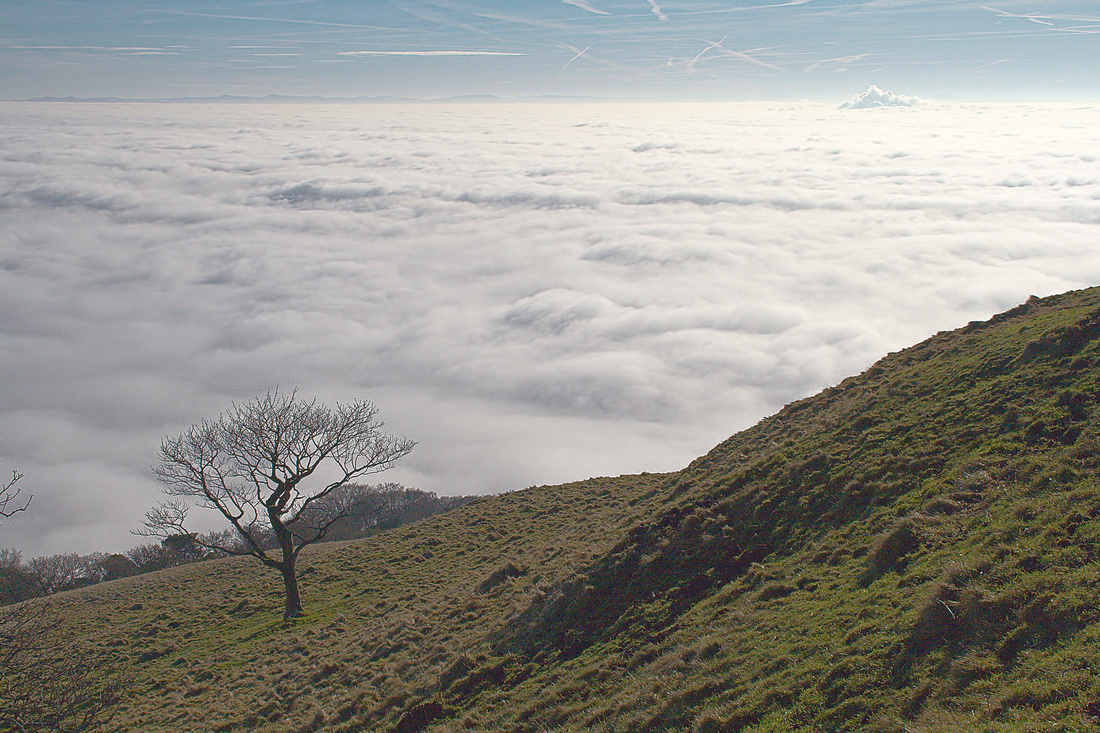 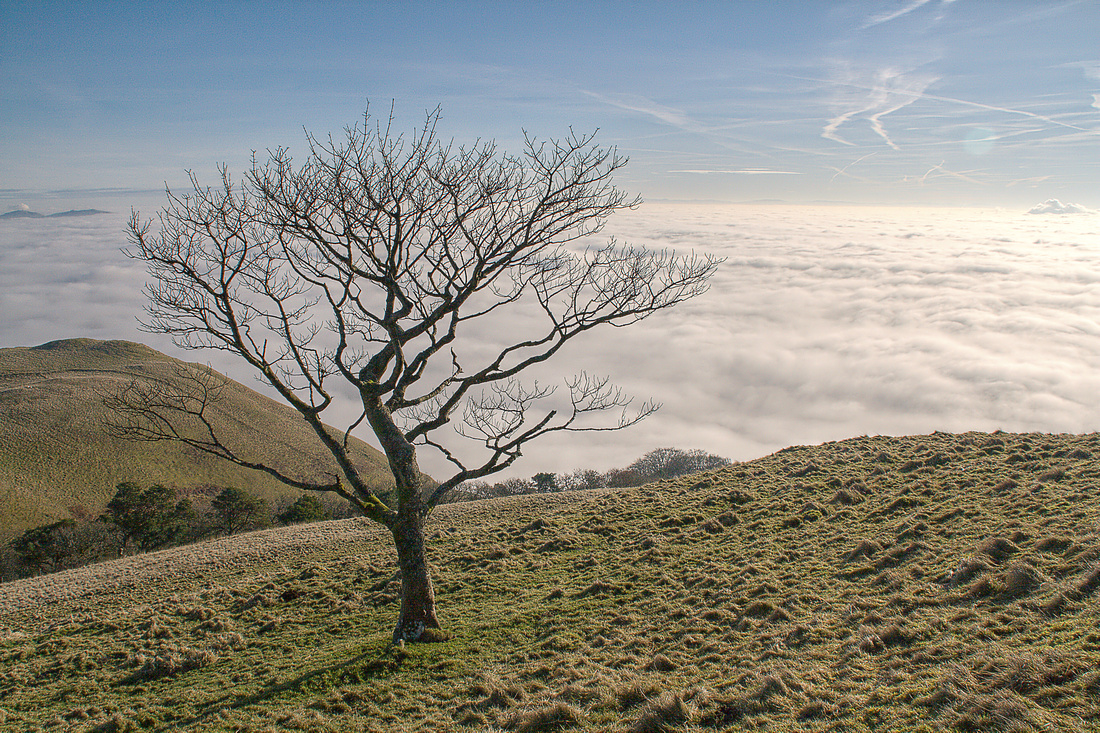 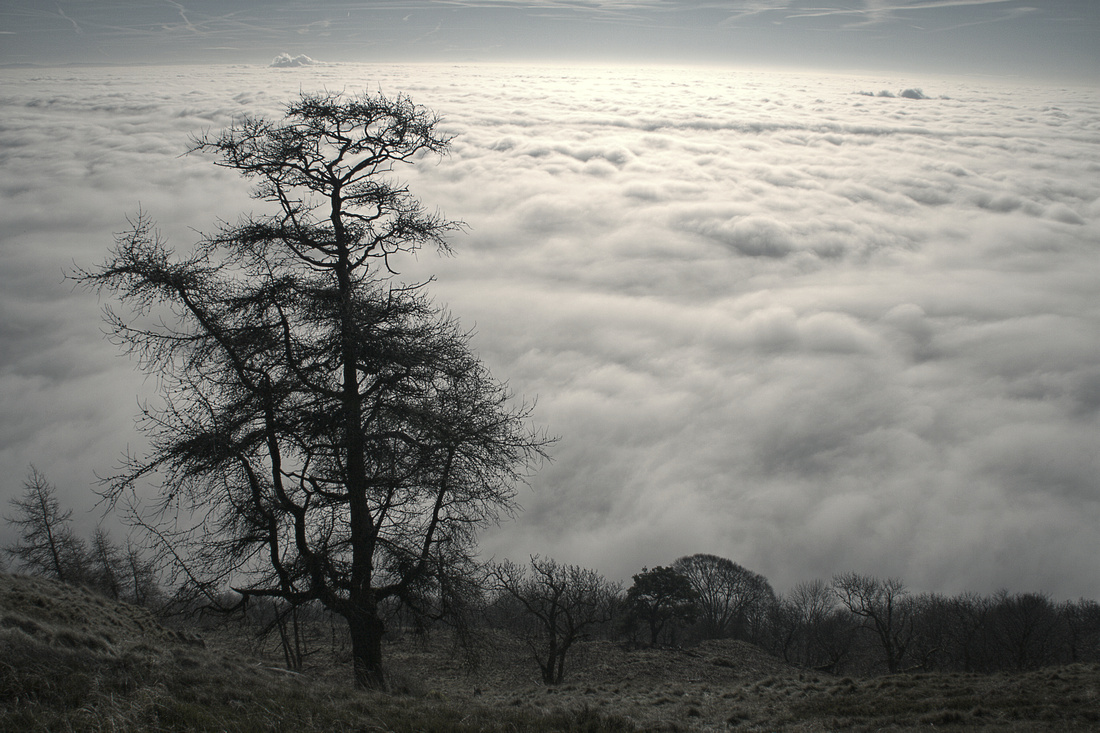 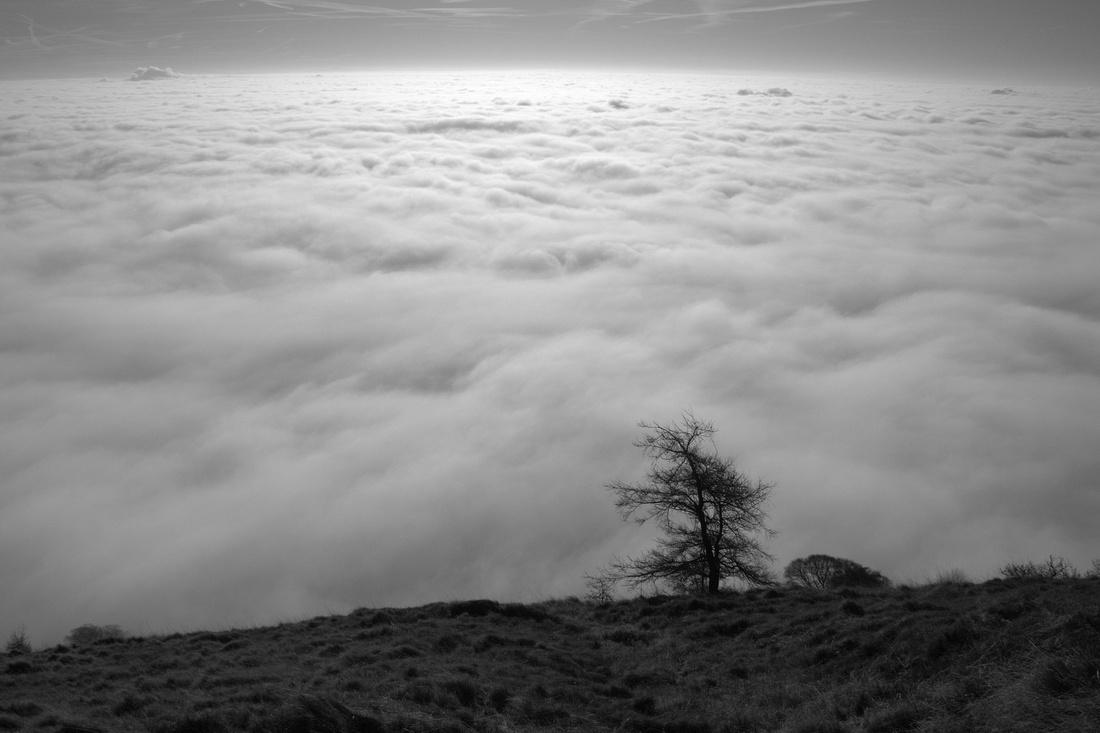 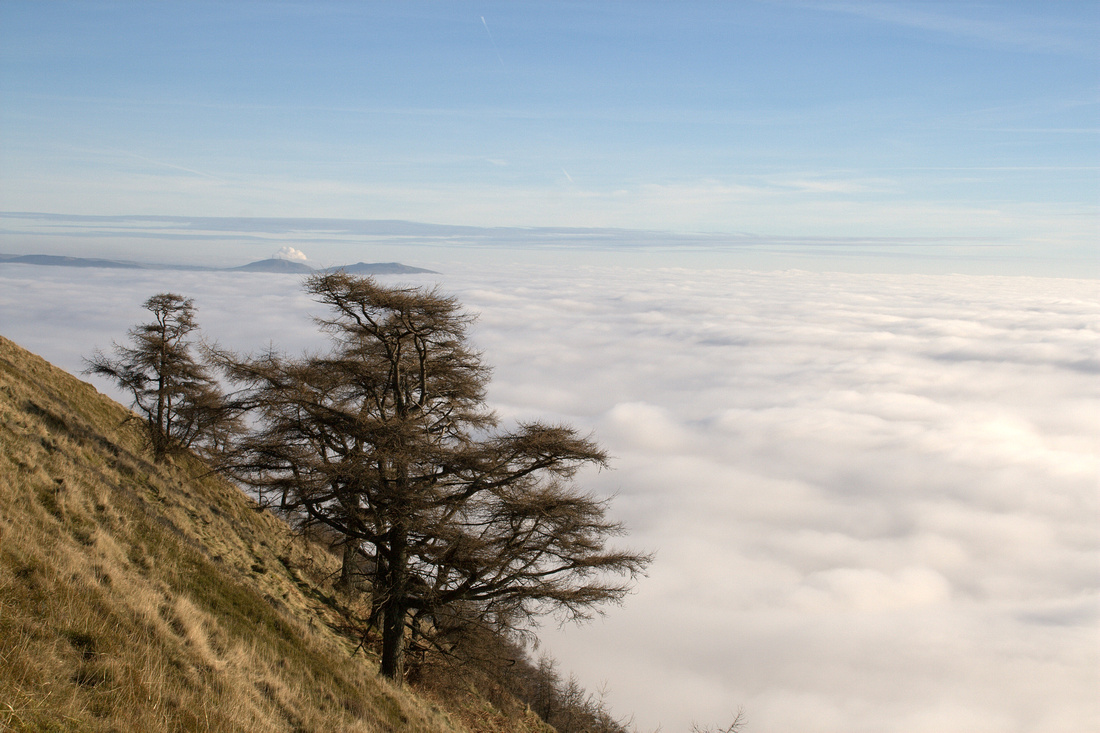 Eventually I dropped back down to where I had started and took some final snaps before walking back into the fog. 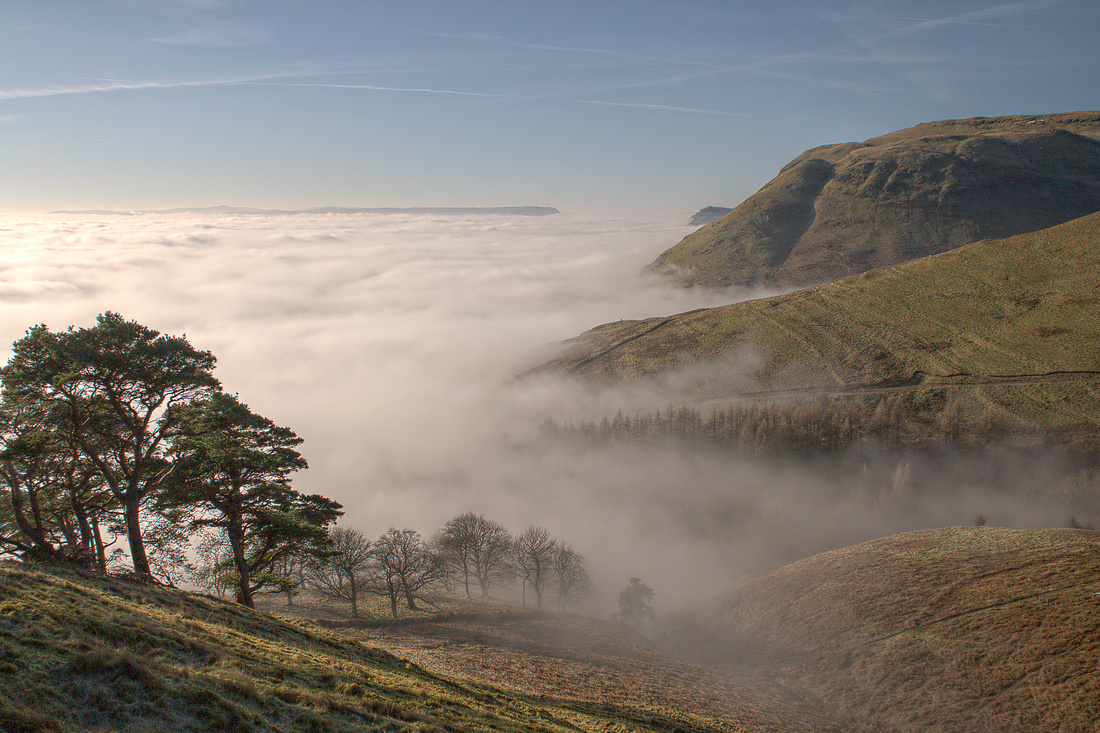 Wood Hill VistaDescending Wood Hill to rejoin the grey world below in the fog. 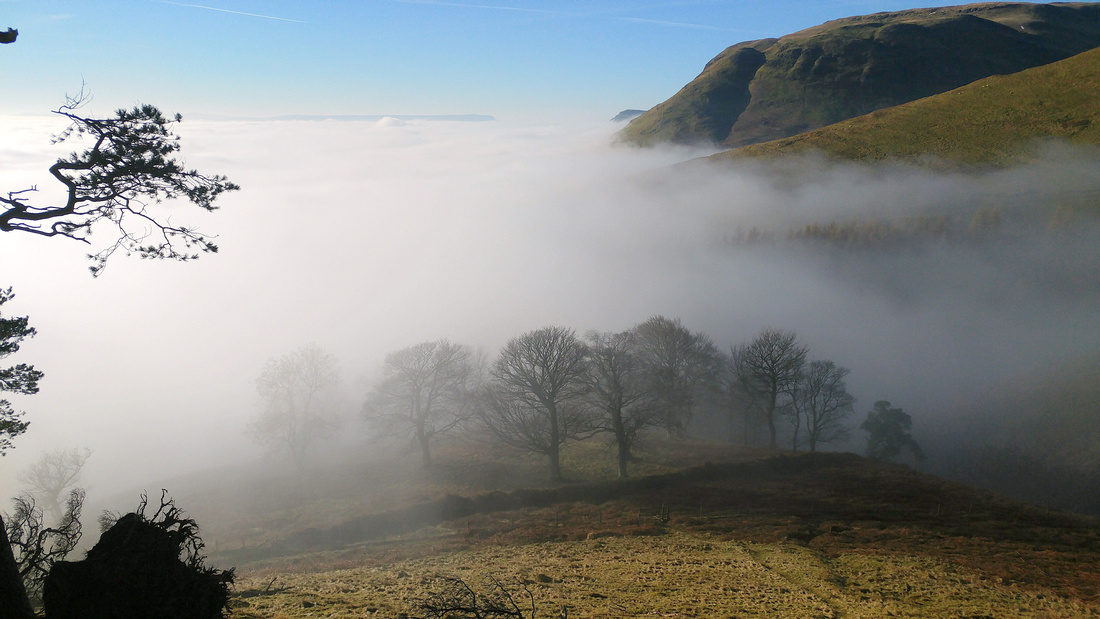 Here it comesHeading down, back into the cold grey fog. 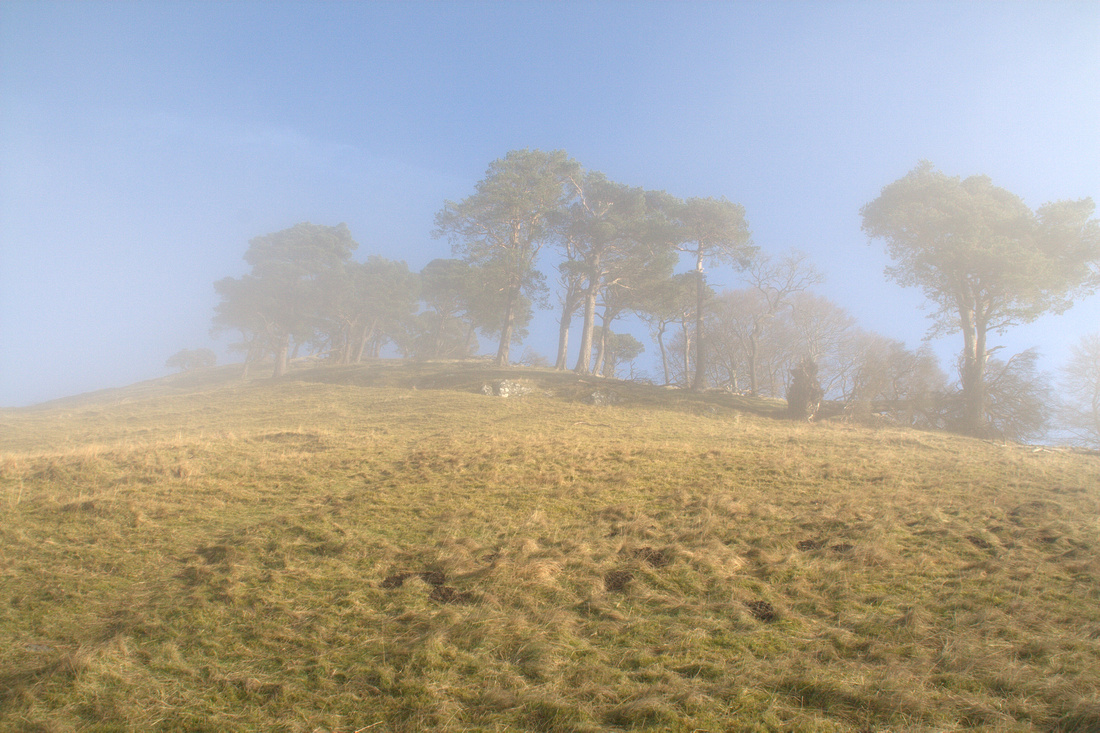 As the fog enveloped me, the change in temperature was dramatic, as was the outlook from a beautiful sunny day to the oppressive cold and dark of heavy fog. Frost still lay on the ground here and I wanted to turn back around and stay in the sun! 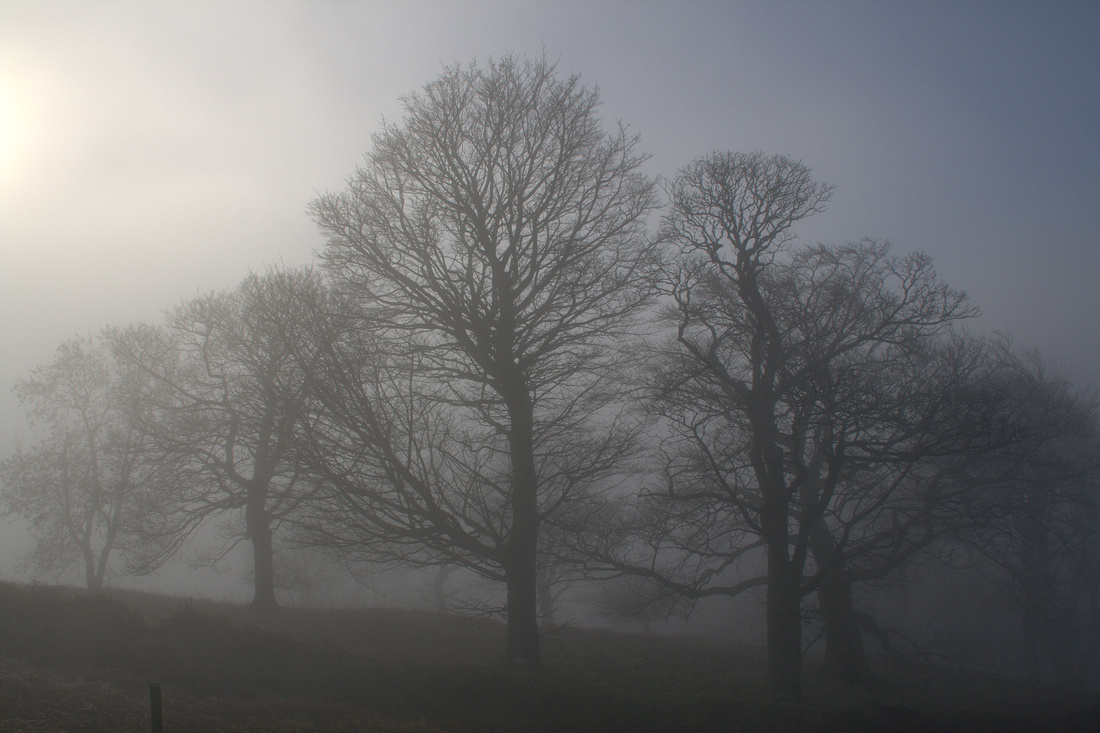 Back in the worldAfter spending a couple of hours in the bright sunlight, I was forced to descend into the grey cold fog to head home

I carried on down the slope however and headed back to my car. I drove home through the foggy landscape with a smile in my heart and a tired dog fast asleep in the boot.

Rise up in the warm sun,
and head for the top,
a pinnacle moment,
the summit is small.

Stand still looking over,
a lonesome tree yearning,
above the many, invisible,
beneath the cold veil below.

Time it is counting,
won't stay for long,
must again join the world,
where we can't see the sun.

Heading back downhill,
the fog it looms larger,
I'm back in the darkness,
alone with the rest.

Linda(non-registered)
Absolutely beautiful photos extremely talented
Has a very good eye wow amazing
Hannelore Gibbs(non-registered)
WONDERFUL!!! Floating in a sea of memories! Love the richness of your poetry & descriptive writing. Can I join you on one of your adventures one day?
No comments posted.
Loading...