Finally having a chance to climb on snow capped mountains after what has been a surprisingly warm winter, Bob parked his car up and we headed down the estate road in the bonny Glen Creran to commence our climb, from near sea level, of Beinn Fhionnlaidh which summits at 959 metres.

At the head of Glen Ure we started the climb up the steep slopes in melancholy light, with our backs to the bulk of Beinn Sgulaird that loomed below threatening cloud. As we climbed the 500 metres or so towards the snow line, the views opened up with the Isle of Mull in the distance to the west and the bulk of Ben Starav, looming above Loch Etive to our south. 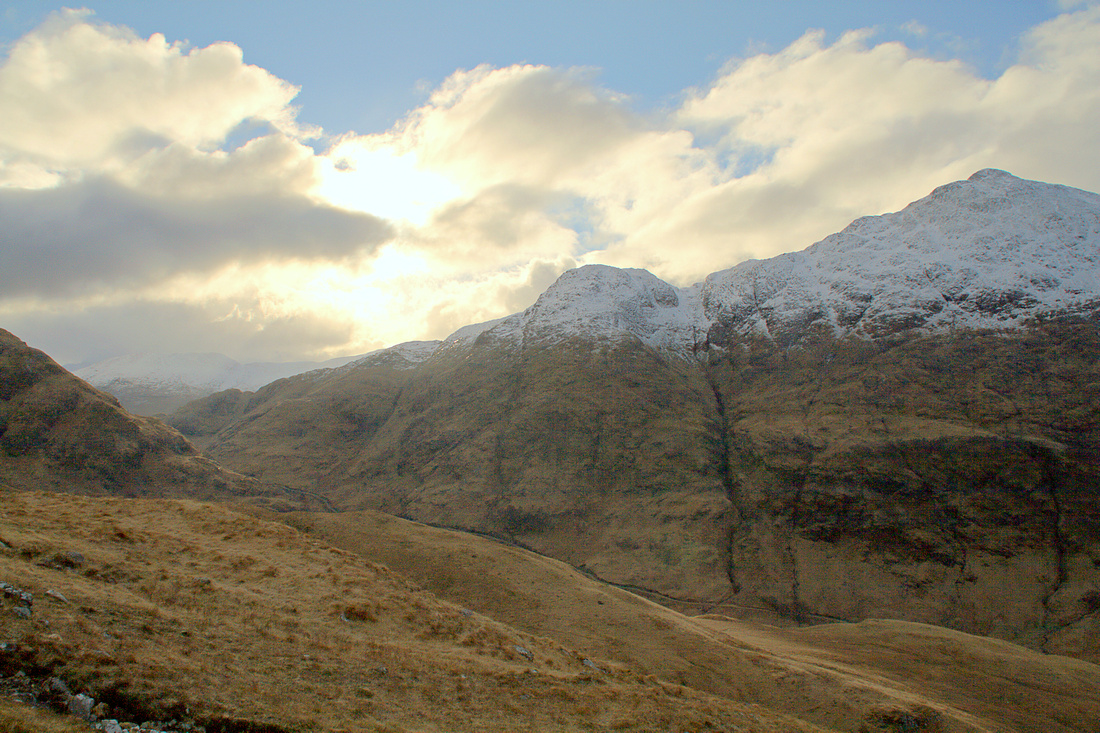 Heading upLooking behind to the looming Beinn Sgulaird in melancholy light 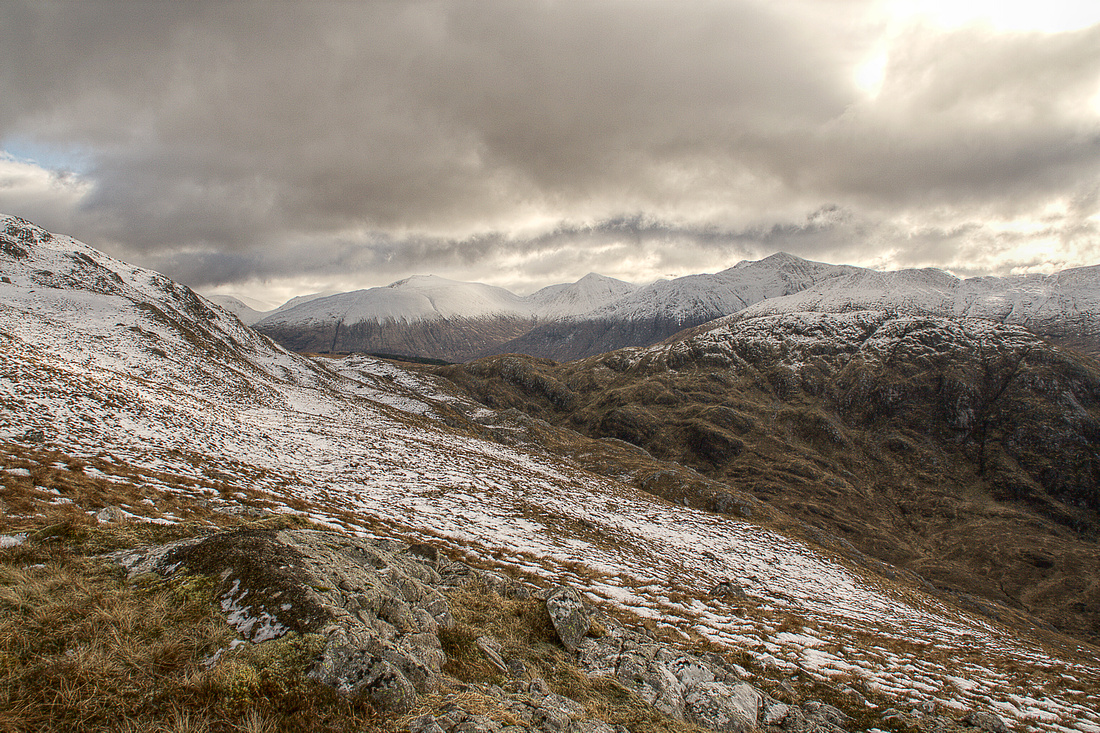 Reaching the Snowclimbing Beinn Fhionnlaidh and reaching the snow line, looking over towards Ben Starave 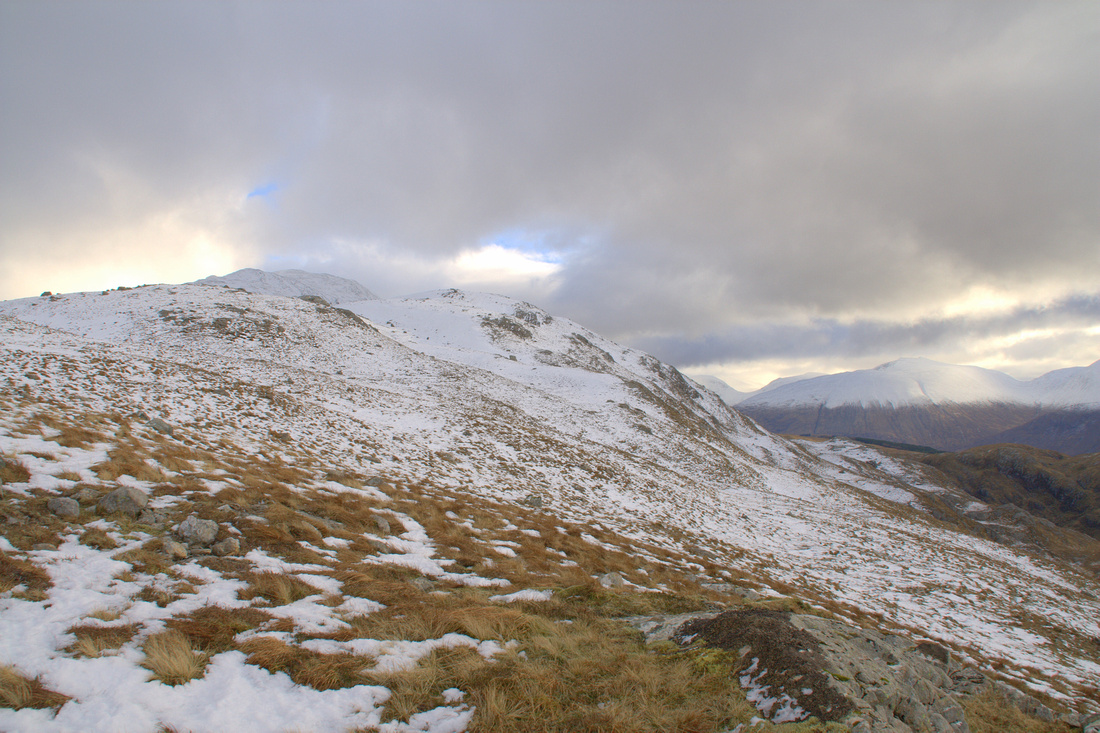 The trip to the topLooking up Beinn Fhionnlaidh at the snow line - still a good way to go till the top!

By the the time we reached the frozen Lochan Cairn Deirg at 630 metres, we had crossed the transition and the snow was well and truly in control. The cloud had broken and it was sunny and dazzlingly bright. Ski goggles were found to be necessary as was full face protection from the wind driven spindrift that occurred at exposed sections. I put on my goggles and the world turned orange with an amazing clarity, where suddenly you noticed the clouds racing across the sky. The snow was crispy but was powdery underneath. It was often almost knee deep in places on the wind scoured rocky landscape. 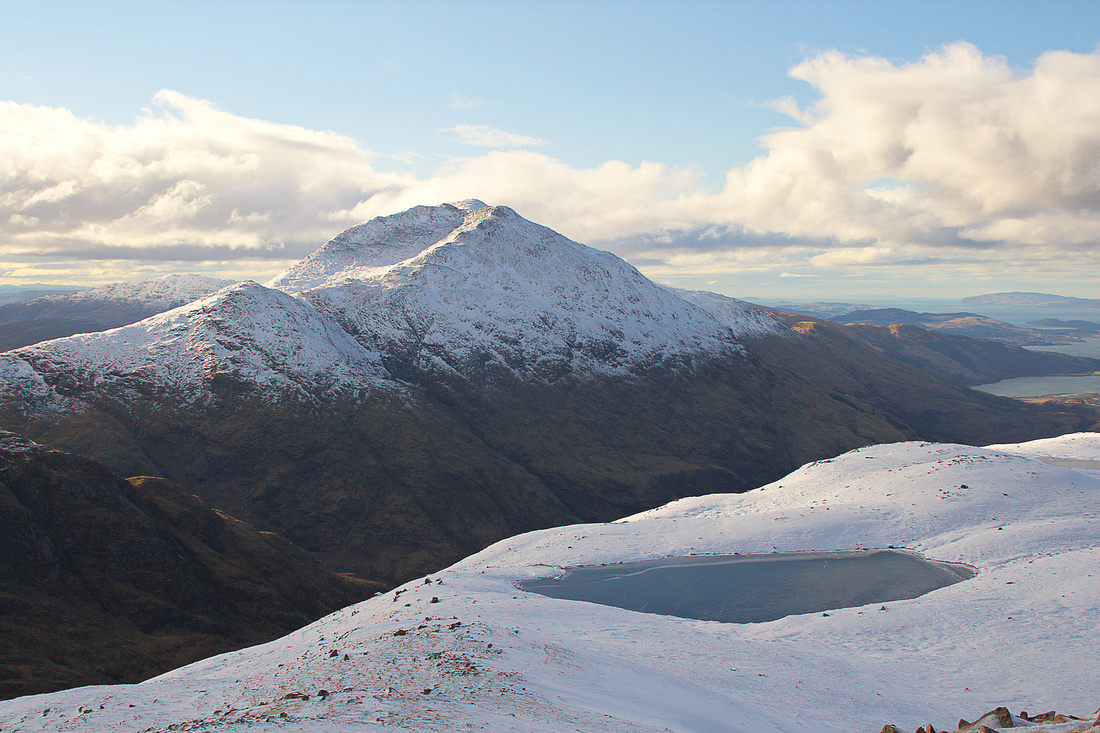 Our crampons would have been pointless in the snow conditions in which we found ourselves, as was our ice axes - I would have to have tried really hard to fall off this broad ridged mountain, although the random gusts of wind did try their best at times to catch you off balance and dash you onto your side. It was difficult going in the soft snow with icy rocks. As we climbed there were times I felt that I was taking one step forward and two steps back, as I would sink into the snow and then slide backwards. I was not used to this level of exercise and was getting leg cramps as I pulled my heavy boots out of the snow drifts and fought forward. I took many little steps and just cursed through the cramps at my lack of attention to my hill fitness. The goggles and face protection also seriously hampered my peripheral vision, so I was travelling head bent looking for my next step - it is a literal pain in the neck!

I stopped once or twice to take pictures and it was a shock to remove the goggles and see how blindingly bright it was in the sunlight. I had also forgotten my inner touch screen gloves (and phone!) and the cold was quickly painful on the fingers to operate the camera and I found it a great relief to put my mittens back on and keep my fingers out of the freezing wind. The first picture below was taken by Bob of me struggling to keep up : 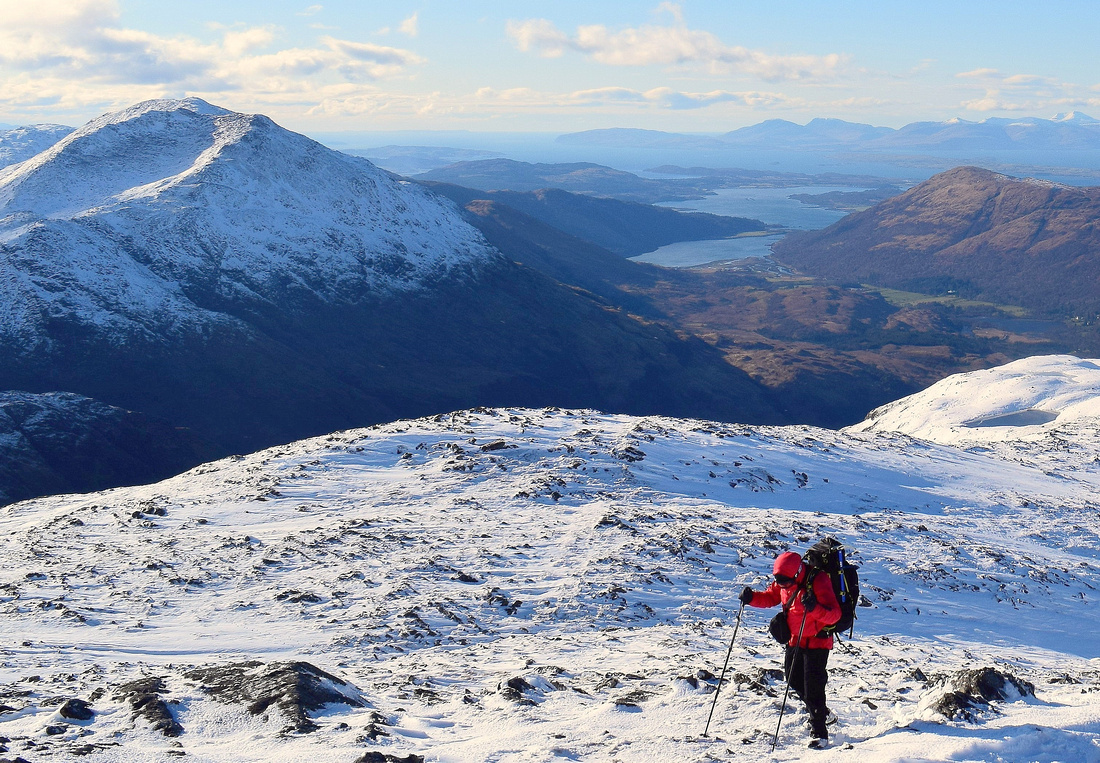 Chris ClimbingMe walking on the slopes of Beinn Fhionnlaidh. This photo was taken by Robert Brown Copyright 2017. 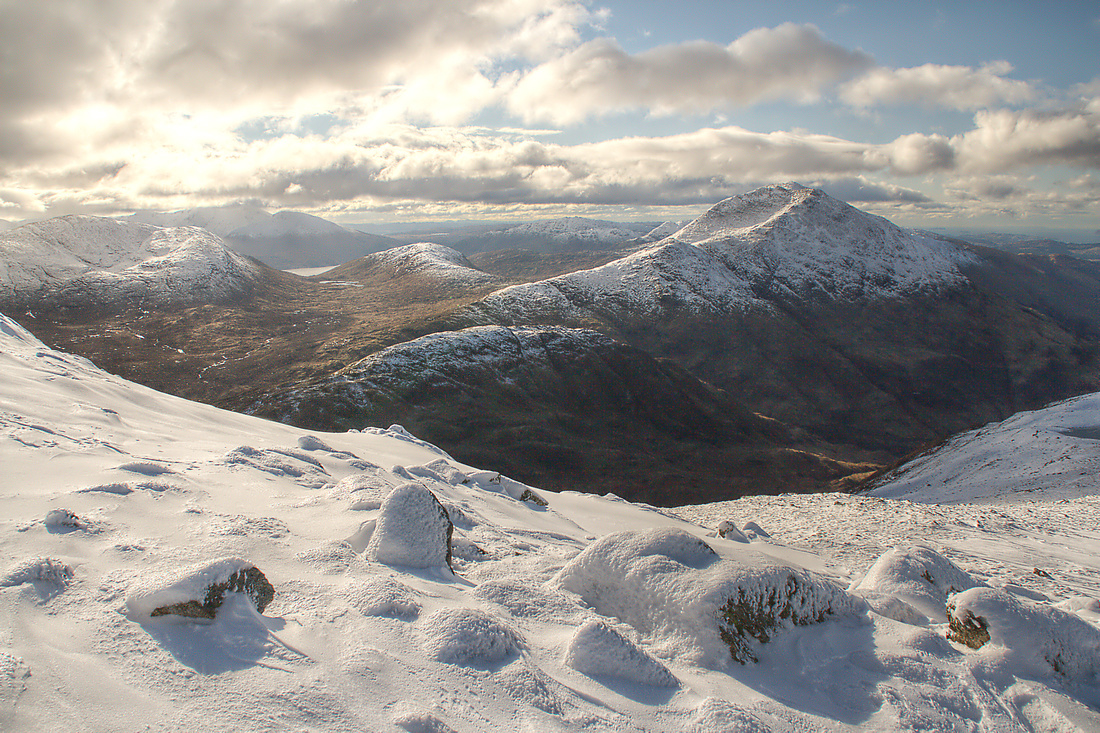 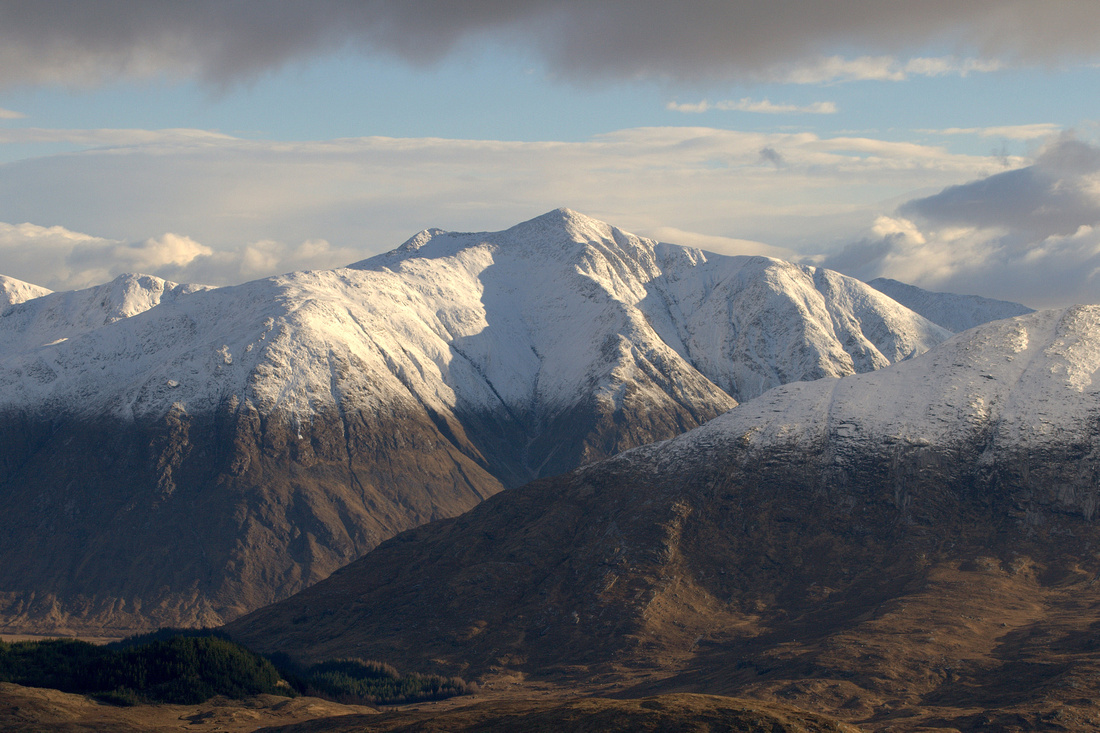 As we neared the final climb towards the summit the wind gusts picked up and threw spindrift violently at us. The gusts would visibly race over the top, picking up ice crystals and then turn into whirling dust devils of spindrift spinning at surprising speed, rapidly growing many metres wide and tall, like mini tornadoes, before suddenly collapsing away to nothing. Trust me to forget my phone! My camera does not take video so this happening remains just a memory.

As we had climbed up we had seen a couple of walkers in the distance ahead of us, we had tried to follow their footsteps in the snow as trail breakers although, in truth, it did not make travel any easier.

They had disappeared over the top for a while but now appeared over the crest and descended towards us. This couple had only sunglasses and hoods on and their raw red faces made me glad for my goggles and face protection. I could only hear the impact of the icy cold spindrift but did not have to feel it...

They told us that the top we saw ahead was a false summit with the true summit being a few hundred metres beyond. It was “wild up there” they told us and they then took off downhill towards milder climes.

As we reached the top, we could see the summit cairn ahead, crossing rocky icy ground in strong gusty winds was entertaining and I was glad for my walking poles to aid balance.

We reached the summit and sheltered behind the cairn from the icy wind and fast moving spindrift. We took some pictures but were quickly discouraged by conditions and headed back down to find a sheltered spot and have lunch. 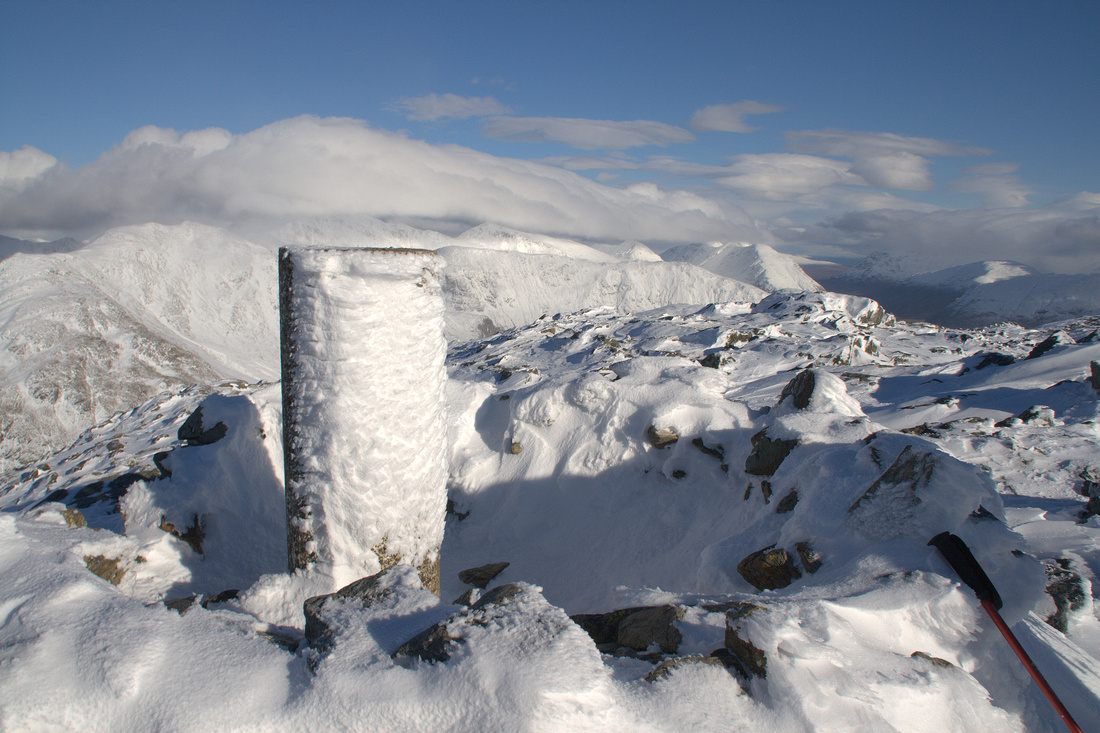 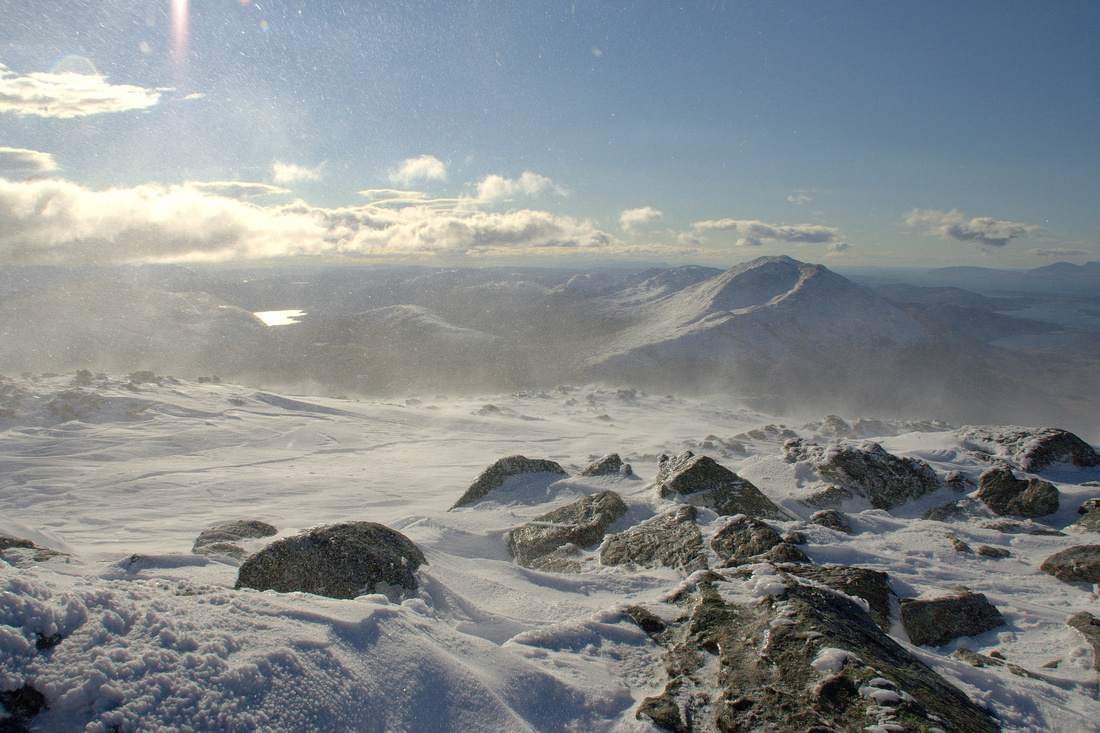 Spindrift FlyByThe wind driven spindrift races past as we shelter behind the summit cairn, camera lenses were quickly covered in ice crystals and exposed fingers frozen. It was also hard to keep the camera still in the wind.

Off the summit, it did not take long to find a sheltered spot and we had lunch in the sun, avoiding the worst of the wind. Without the wind it was almost pleasant and you could unwrap your skin and feel the sun.

After lunch we continued the descent. By the time we reached Lochan Cairn Deirg, it felt a lot warmer and we were starting to unwrap our face shields and remove our hats. As we left the snowline I removed my orange ski goggles and it took a surprising amount of time for my eyes to adjust back to normal colours with a psychedelic transition period - I pointed out to Bob that the snow patches around us were “antifreeze blue”, he gave me one of those looks and after my eyes adjusted I realised that they were in fact white, as they always are!

We continued down the steep grassy slopes towards the car, taking in the views one last time as we dipped below the surrounding landscape. Once in the car we headed home, stopping quickly at the head of Glen Creran, to capture the last of the sunset light up the sky as the sun sunk below the Atlantic. 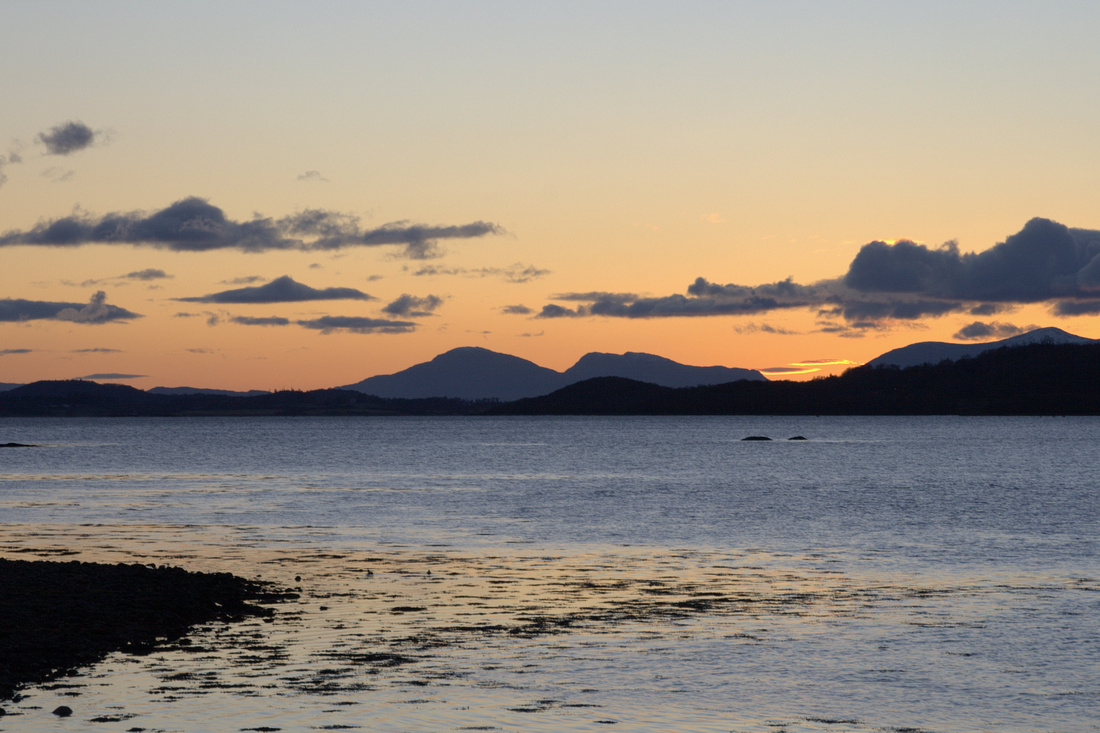 Atlantic SunsetThe sun sets at the head of Glen Creran