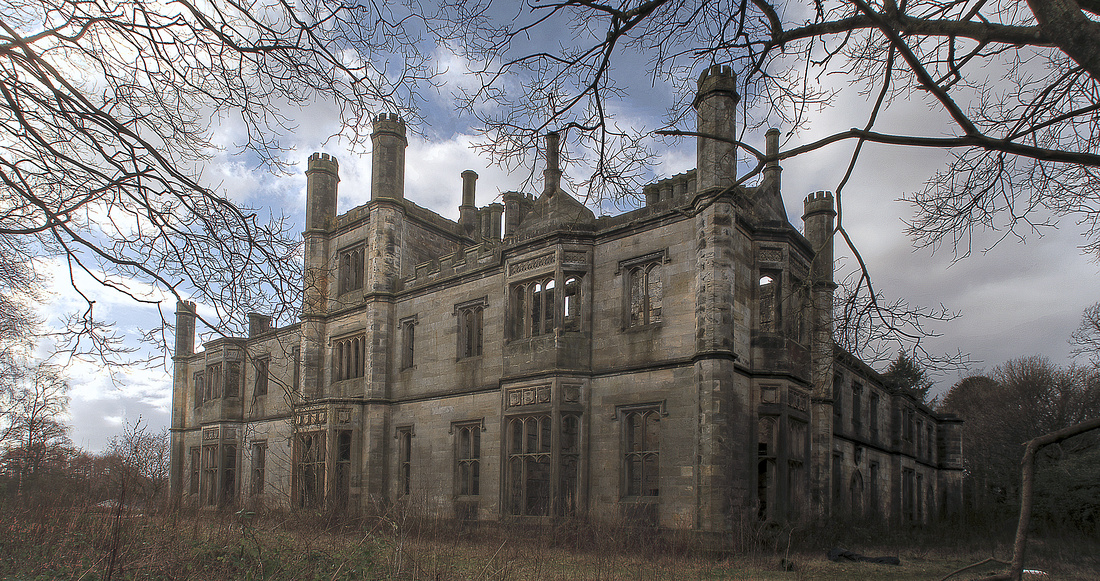 Dunmore House is a partially collapsed ruin located on the Dunmore estate near Airth, Falkirk. We have many striking and significant ruins such as this in Scotland and this particular building could be considered a remnant of empire, where the landed gentry of the time could afford to build and maintain these large expensive houses, funded from the fat of the colonies over which they had influence.

The Dunmore Estate was the seat of the Murray family, the Earl’s of Dunmore, from 1754 who had purchased the land from the Elphinstone family, the occupiers since 1338. The most notable Earl was the 4th Earl of Dunmore, John Murray or Lord Dunmore. This particular Lord is remembered as an American villain. He was the first governor of New York and he was the last royal governor of Virginia, during the time of the American revolution - Lord Dunmore played his part on the losing side.

The American connection is actually still visible on the Dunmore Estate, where a now little-used road is lined with large Sequoia trees which, given time will become giants. The tree connection is, however, a coincidence, as they were only first discovered in 1833 and Lord Dunmore was sent packing from North America much earlier, dying in 1809 in Ramsgate. The trees are therefore more likely to have been planted as a result of fashion, rather than as a connection to the 4th Earl of Dunmore’s checkered American history. 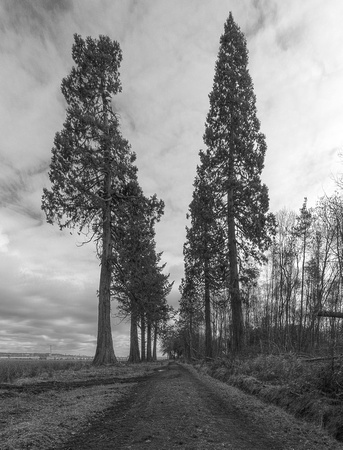 Dunmore Sequoia'sEven though the Earl's of Dunmore's association with America ended with the 4th Earl. A piece of America remains on the Dunmore estate in the form of these giant Sequoia trees which can live many centuries.

The current ruin of Dunmore House was designed by the architect William Wilkins around 1825 and the Murray family lived there until 1911. The house remained a private dwelling until 1961 and it then had a short spell until 1964 as a girls school, after which it was abandoned. A large part of the rear of the building has since been demolished, but much remains to demonstrate its crumbling grandeur. My most recent visit in autumn 2016 was surprising, as a lot of saplings have grown quickly and obscured the front of the building. My pictures from 2012 and 2014 that you see on this page would likely not be possible now, at least not in the summer.

Dunmore House PanoramicThis is a stitched panoramic of very many 50mm shots taken at close range. I was amazed the software could handle it, although it did need a bit of help and the distortion is obvious from where I took the shots.

The 4th Earl of Dunmore has however left a lasting legacy - the Dunmore Pineapple that is dated 1761 above its doorway. The Dunmore Pineapple is, in fact, a large stone pineapple that has been carefully crafted to prevent water gathering, it has survived to this day without any frost damage to its delicate stone form and it still looks impressive. This folly was built to crown the hothouse building where actual pineapples were grown for the privileged few. This very unusual building is now looked after by the landmark trust and is available to rent as a holiday home. 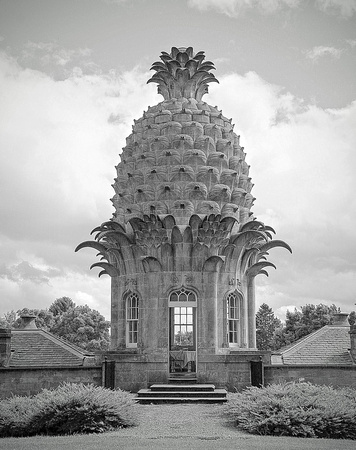 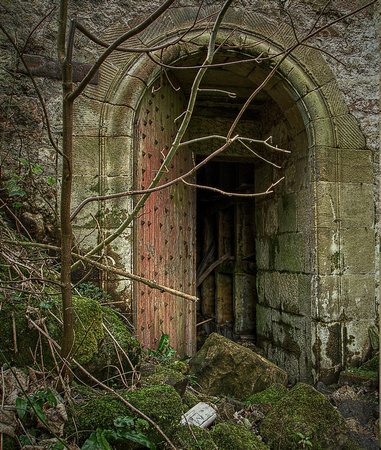 There remains a legacy to the Elphinstone family, hidden in a wood near the Sequoia lined road on the Dunmore estate. Elphinstone tower is a partially collapsed tower built in 1510, two hundred years before the union of Scotland and England. A picture of the tower and the neighbouring but now demolished church can be seen on the website of the Falkirk local history society. My 2013 pictures, however, present a much sadder scenario where the tower is partially collapsed and even the cross, marking a grave in the foreground, went missing sometime after in 2014. My other picture shows the door of the tower being ajar and the coffin racks of the Murray family crypt exposed for me to photograph. The remains of this family, more well known on another continent than to their own countrymen, had long been moved to another location due to simple vandalism a few decades earlier.

My last visit in 2016 found the door totally removed and the tower struggling to retain its shape; a tired and forgotten witness of 500 years. 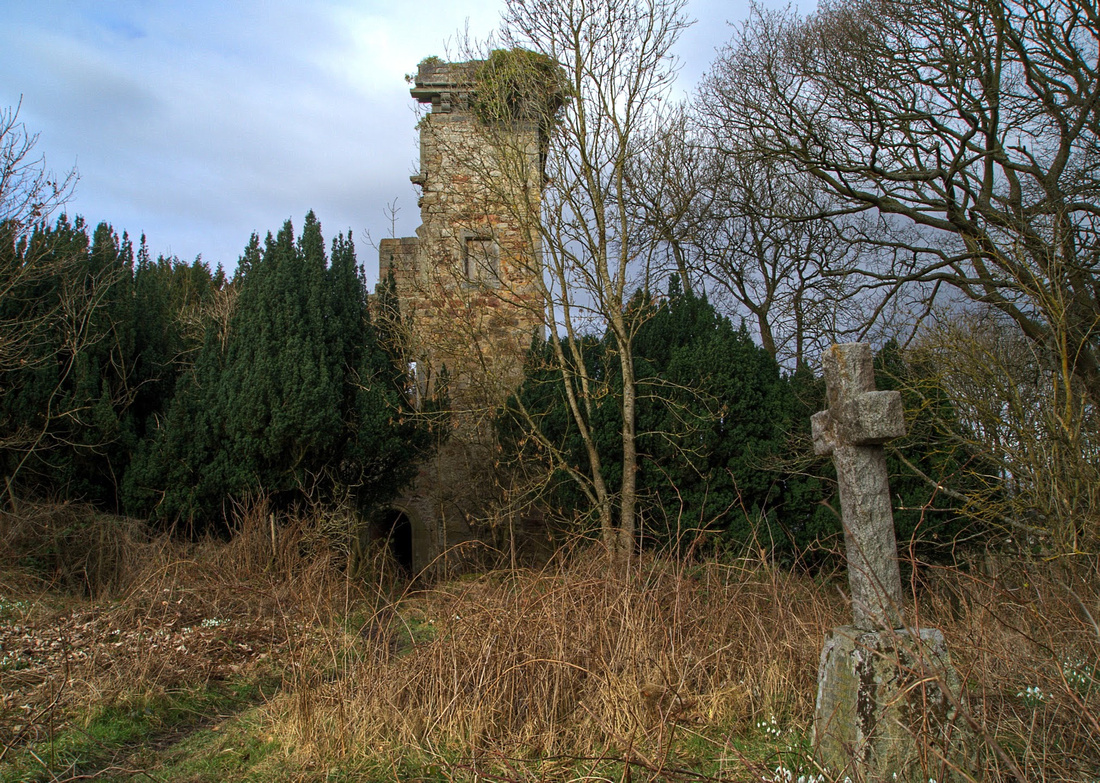 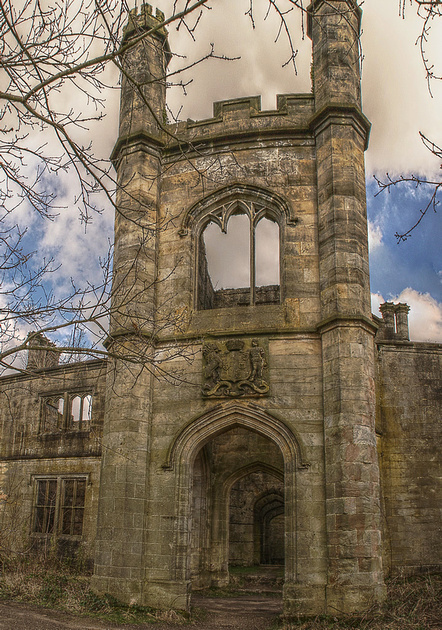