I have recently returned from a weekend on the Isle of Skye where we (my wife Karen and my Brother-in-law David) only had one full day to explore. We arrived at the Dunollie hotel in Broadford on the Friday afternoon and then hit the hotel bar for a few drinks, before retiring to bed for an early start to get around the sights.

After breakfast we headed off early for Glen Brittle where we decanted from the car to get a picture of the Fairy Pools. I have seen pictures taken in the summer and they do look magical with the bluey green tinged but crystal clear water.

The morning of our visit was angry weather and we arrived in thick fog. As we walked up the glen, the fog suddenly lifted so we hurried up and took some pictures. The glen was Tolkeinesque in these conditions so it certainly made for some different pictures of this place; more the Orc pools than the fairy pools. 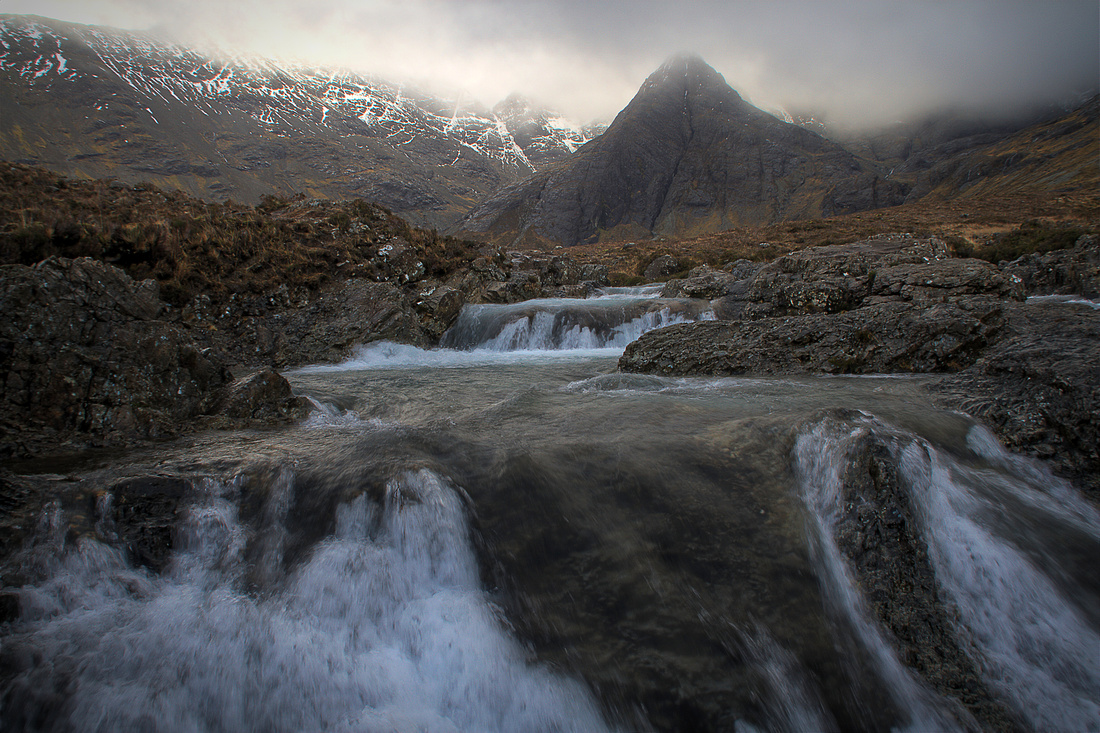 I took this video too of the fast moving clouds, the shaky hand is not my fault - it was the wind and the hotel bar!

As we headed back down the short path, there were many people heading up towards us - By the busloads! You would not get a picture with that amount of people so we were glad that we got there early! As I reached the car I turned to look and saw that the fog had descended again - all those people and their potential pictures obscured by fog. The Orcs must like me…

The car park was full and people were waiting to park so we took off and headed for the largest town in Skye, Portree. This gave Karen a chance to browse the shops in this small town which is something that makes her happy but the rest of us miserable! 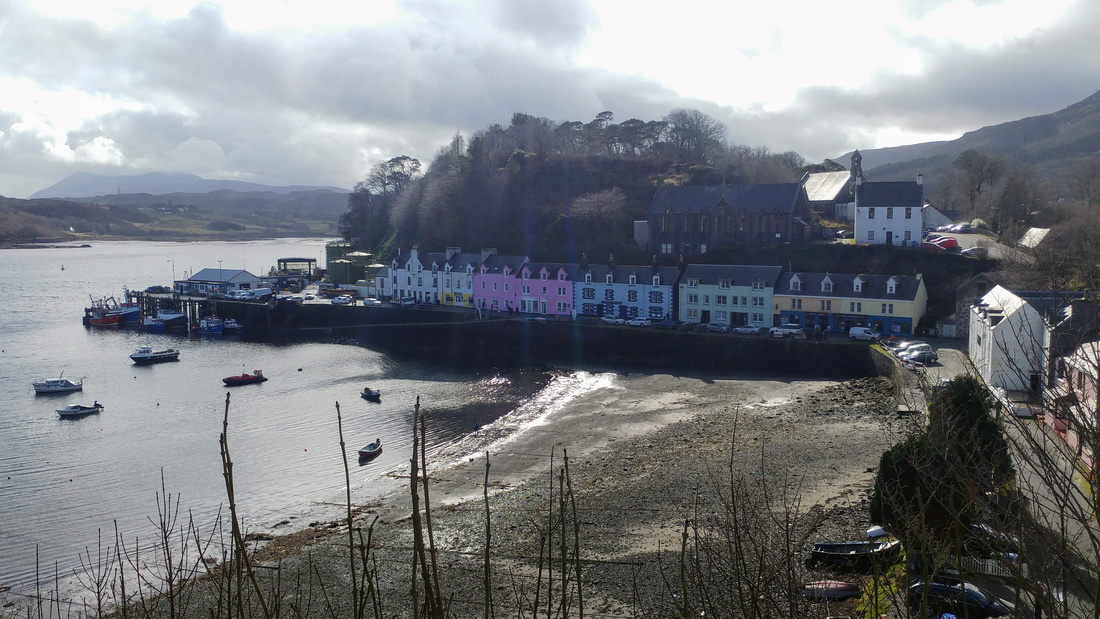 PortreeThe main town on the Isle of Skye

After having a nice lunch in Portree, like proper tourists, we headed past the old man of Storr, which you can see from far away on the Trotternish Ridge. Without Karen,  David and I would have revisited it (I was last up there in 2008) but Karen had a sore knee so we drove past another busy car park. I took this picture on the Storr back in 2008, it is one of my favourites and I hope to revisit. 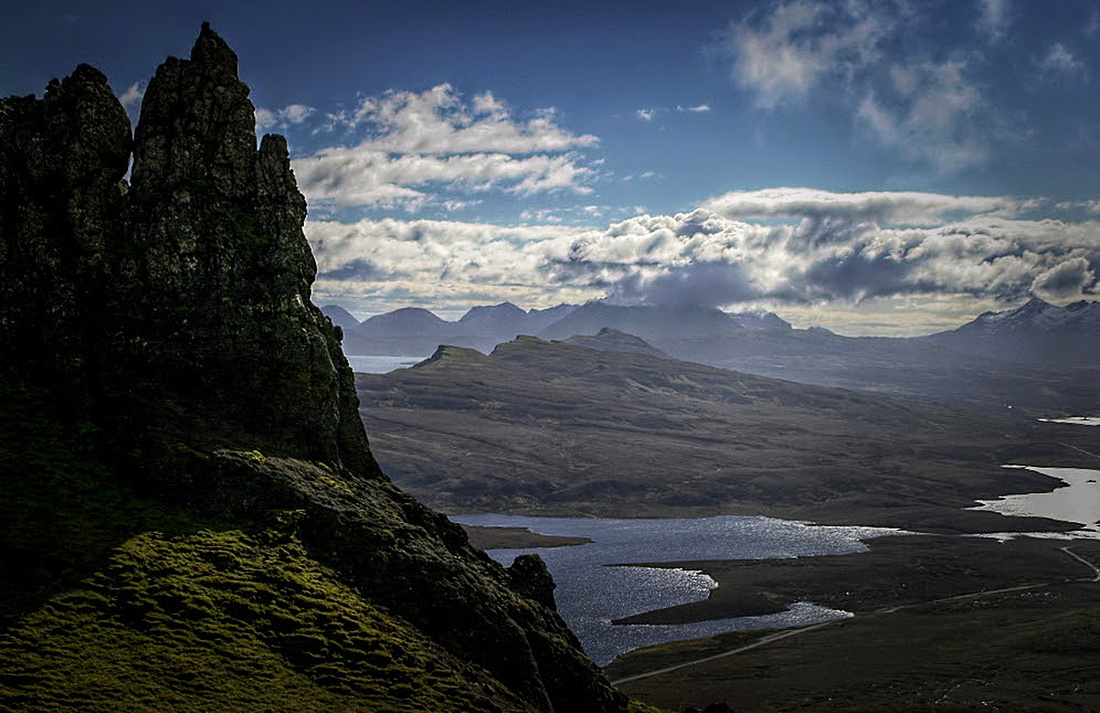 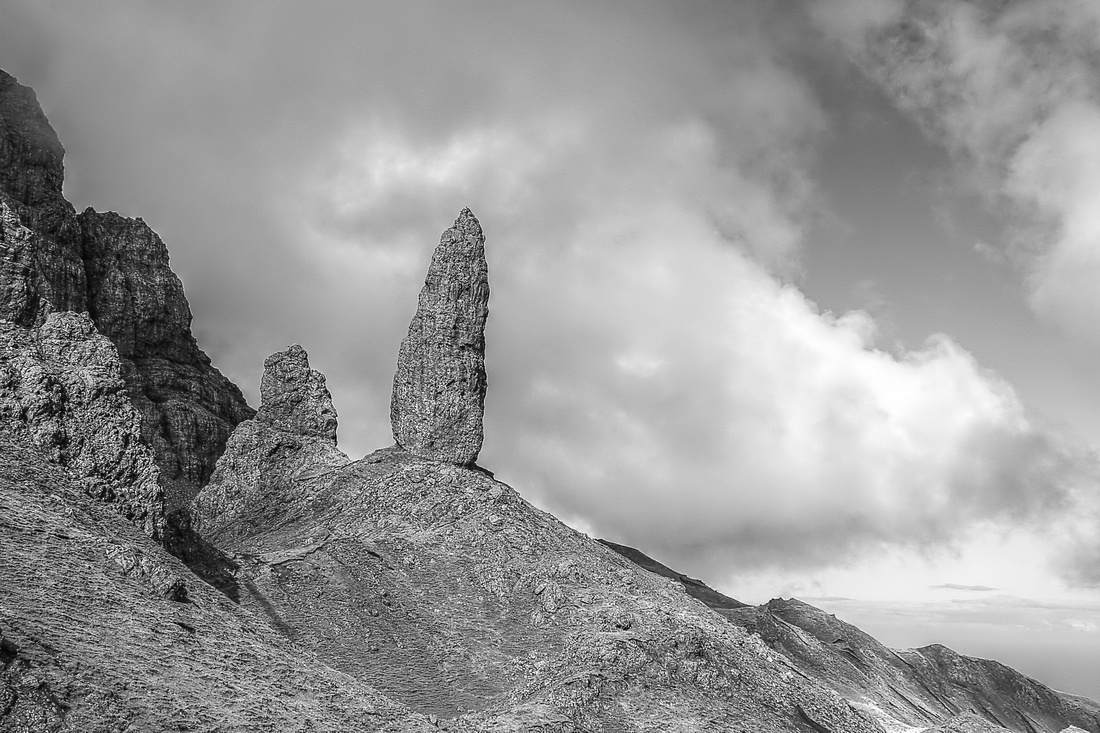 The Old Man of StorrThe weird rocks on the Isle of Skyeye. The name old man seemingly comes from the face on the formation on the left, rather than the needle shaped rock. This picture was taken March 2008.

We headed to Staffin bay and I tried to photograph the Quiraing from there but the light was not on my side, even though the weather had now turned for the better. 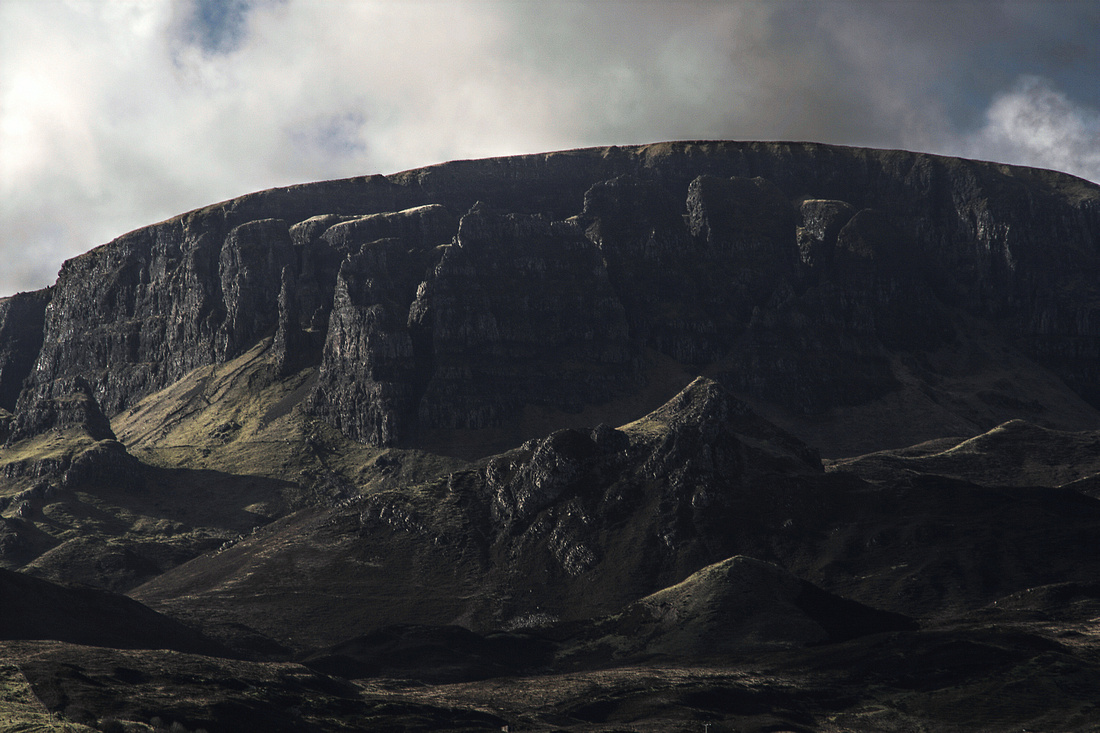 The Quiraing from Staffin Bay 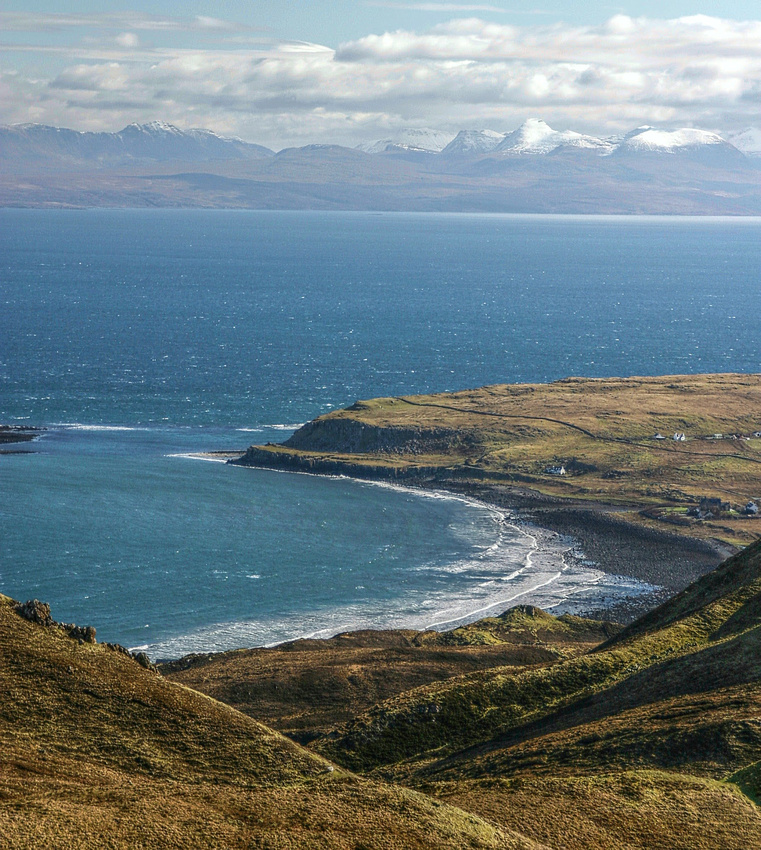 Staffin Bay from the QuiraingIsle of Skye Scotland, March 2008

We then drove up to the Quiraing car park which is on the edge of the Trotternish ridge. I have walked along the Quiraing and around the rock formation called the prison, but I have still to visit it properly - today was not that day, alas.

Instead I took pictures of the Trotternish Ridge and I marvelled at all the formations on this slow motion landslide that has been slowly breaking away over many thousands of years. 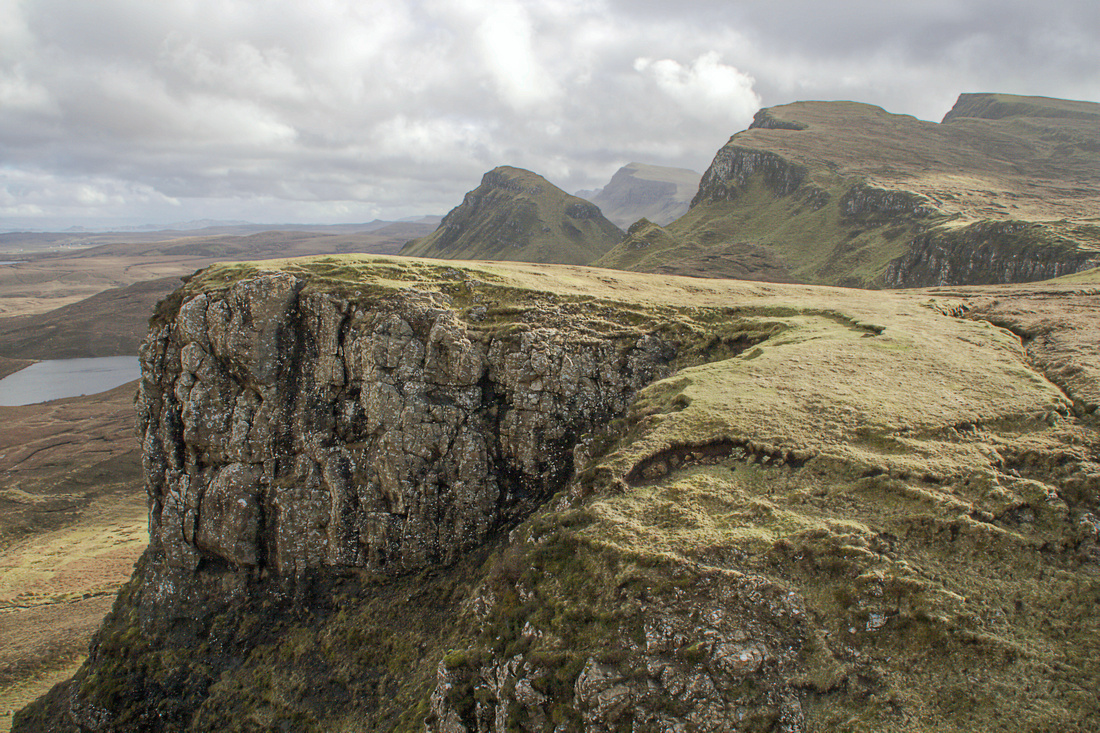 The Trotternish RidgeIsle of Skye, Scotland 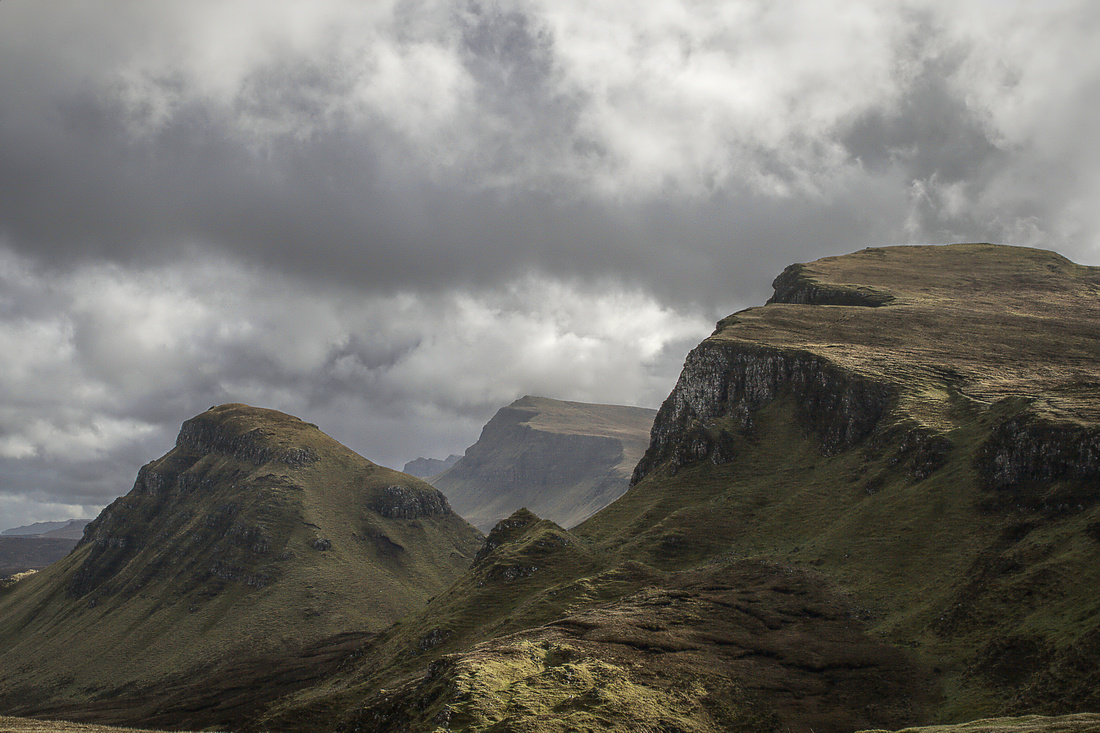 The Trotternish RidgeIsle of Skye Scotland 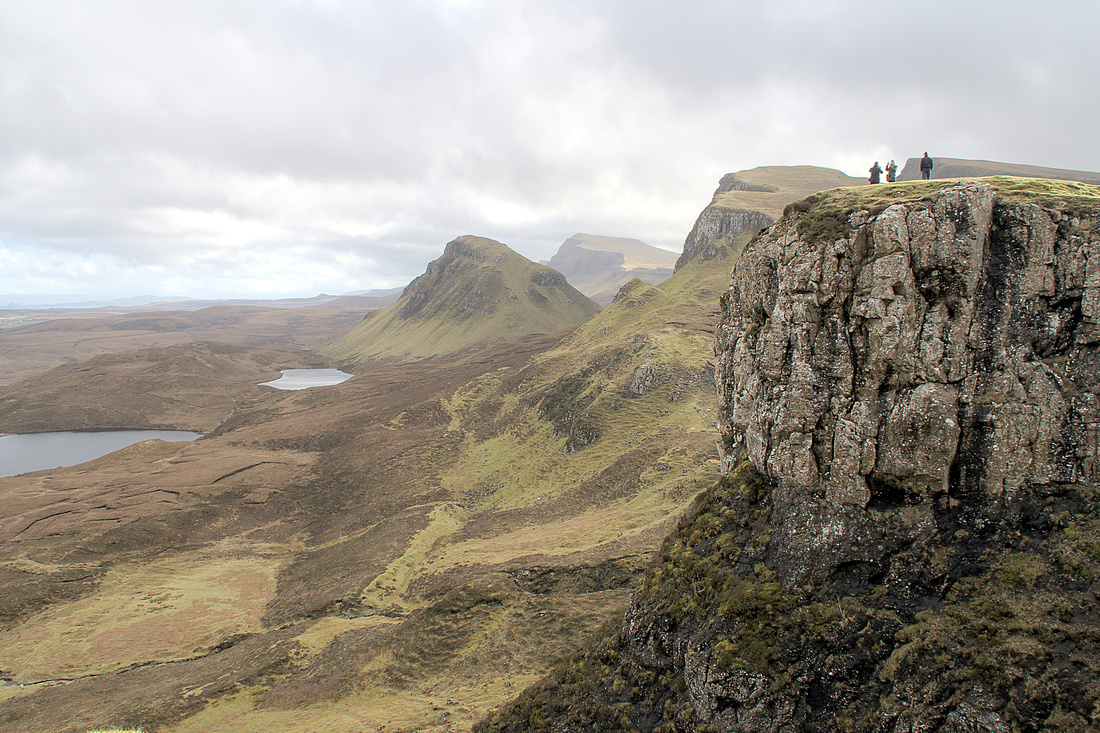 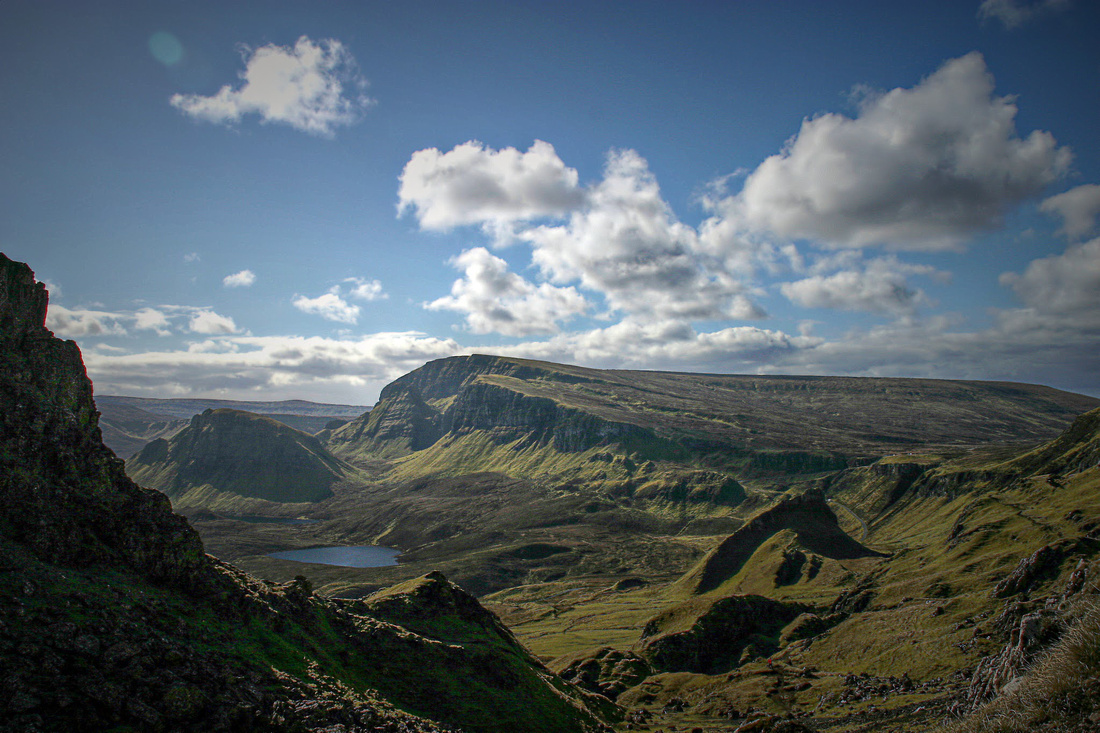 Trotternish Ridge from the QuiraingStanding under the prison. This picture was taken March 2008. 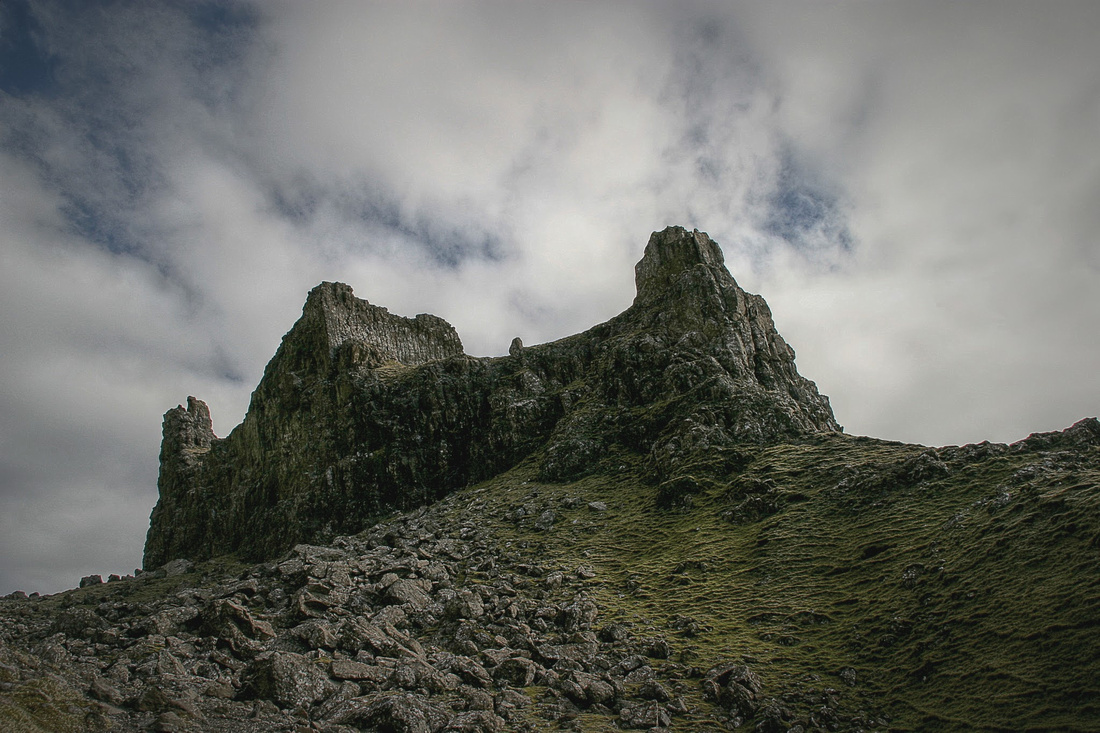 The PrisonThis rock formation is a slow motion landslide from the Qiraing, the rock is heavily eroded and loose making it a challenging scramble. This picture was taken March 2008. 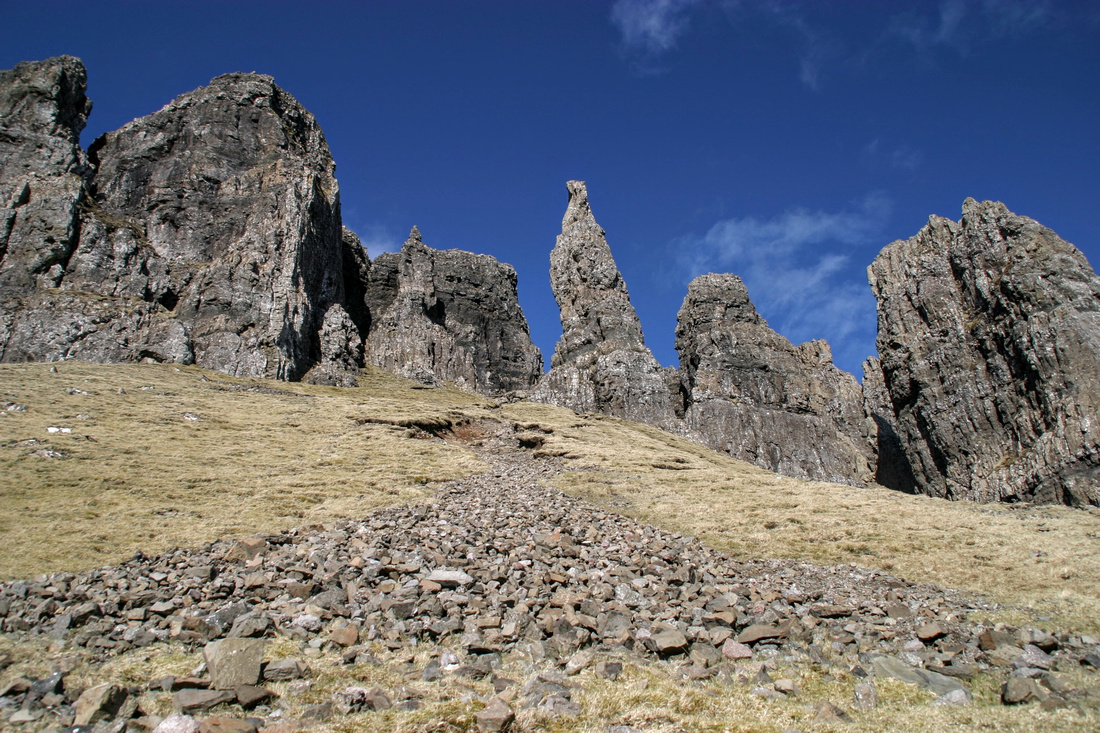 Beneath the QuiraingThe Isle of Skye Scotland. This picture was taken March 2008.

We then headed westward with the intention of visiting the Fairy Glen. After a good drive we went straight past the turn off as we left Uig, so we carried on as we could not be bothered turning back! I have been there before and didn't quite “get” it. We had a debate on visiting Dunvegan Castle, but instead we headed for Elgol (via our hotel) to catch the sunset.

We enjoyed a calm sunset on Elgol beach looking towards the cloud shrouded Black Cuilins and quite a  few pictures were taken. 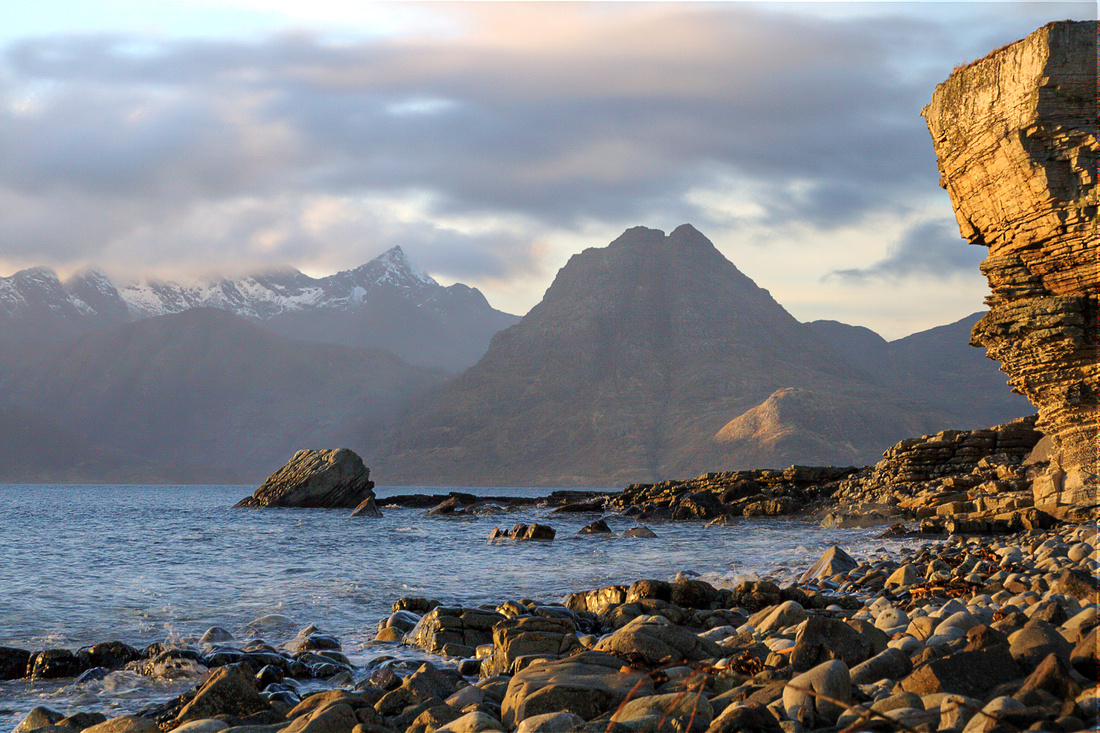 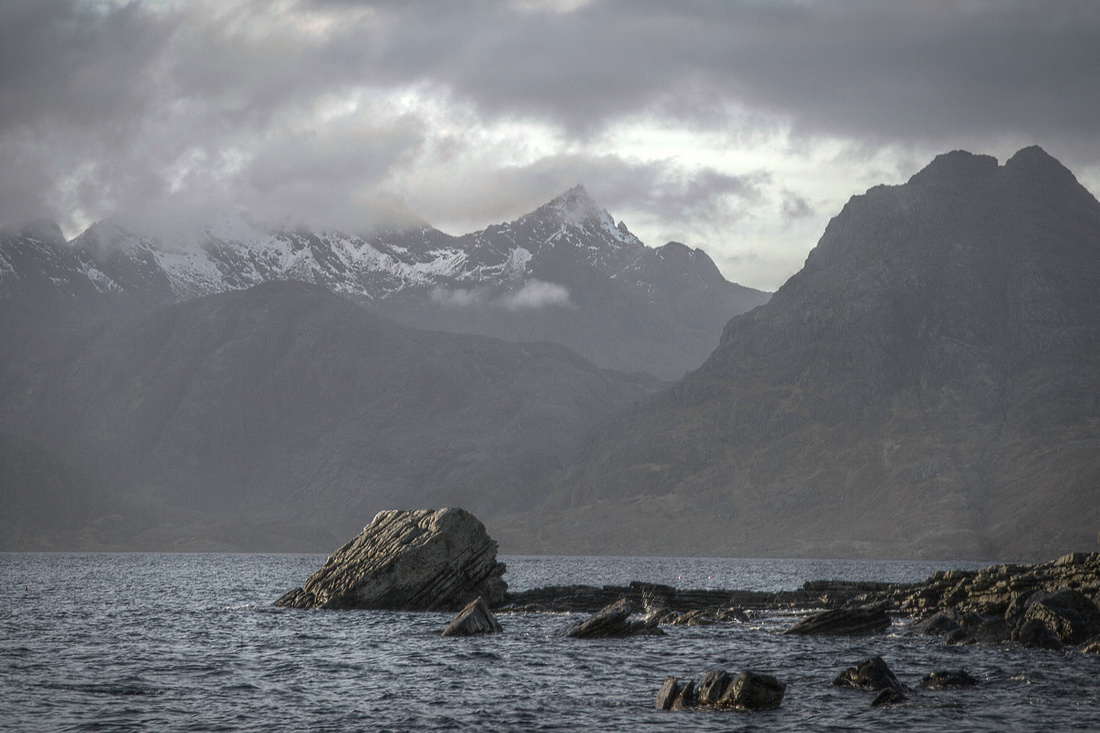 The Black CuillinsTaken from Elgol on Skye 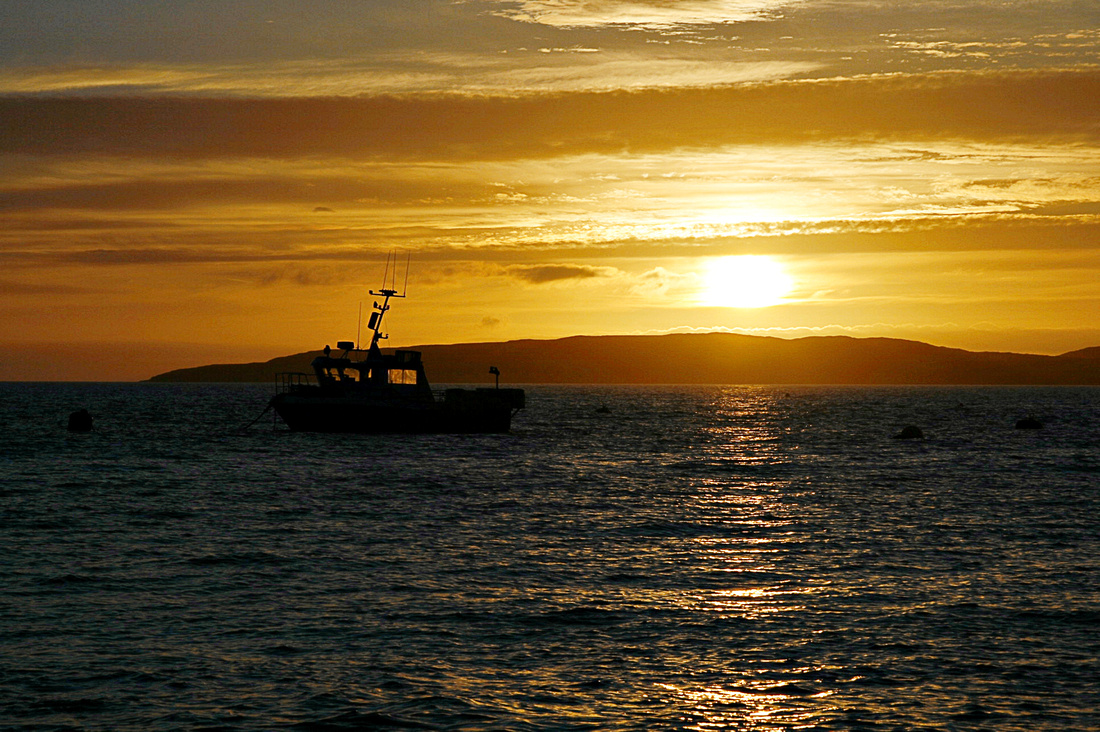 Elgol SunsetWatching the sunset at Elgol

After the sunset we drove back to Broadford on the single track road to the hotel, viewing the beautiful countryside in the dusk, lit by a bright full moon. In the morning it was a four and a half hour drive back where, nearing home, I saw my beloved Ochils. After having visited the Isle of Skye, they suddenly looked to me as being very small and very tame.