Two Nights in the Cairngorms

In September 2015, Bob and I set out for a long weekend in the Cairngorms. We parked at Linn of Dee and headed off towards White Bridge and then headed up to Carn Cloich Mhullin. 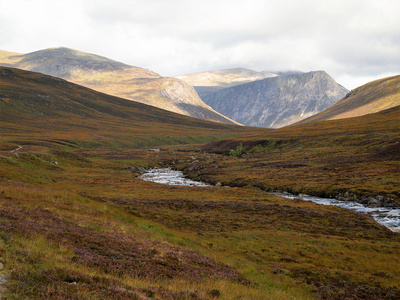 Looking North from White BridgeWe were heading up to climb the hills on the left, in the evening we were to camp beneath Devil's Point on the right. 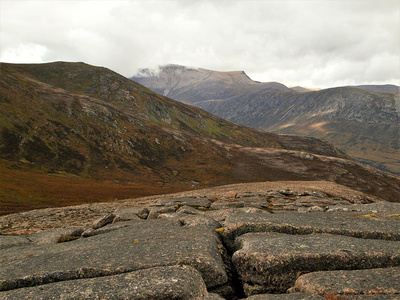 It was a good walk and climb to Carn Cloch Mhullin after which we quickly made the higher top of Bheinn Bhrotain. This top is marked by a decent boulder field, over which we had to step carefully - I lost concentration a couple of times which is not good as you could easily hurt an ankle, or worse, through lack of attention. After clearing the boulder field, we eventually topped Bheinn Bhrotain and then carried on Northward to drop down to Loch Nan Stuirteag at the head of Glen Geusachan.

At this spot, a conversation was had; Bob, who likes to push on, suggested a climb to Devil’s point and then descend down the steep slopes to Corrour Bothy. It would be dark but he has descended there before at night. I on the other hand, the lazy office worker who had smoked for 30 years previous, was perturbed at the offer of extra exercise that the additional climbing offered. I instead eyed the safe glen below entertaining the thought of sitting beside my pitched tent and brewing a cuppa.

It was decided to head down, I felt sorry for holding Bob back but, I would have felt more sorry for myself descending steep slopes at night on tired legs.

Dropping down and walking into Glenn Geusachan, the going was not easy, as the paths were occasional and patchy with the heather in between them deep. We were looking out for a spot to camp as the shadows were lengthening, it was a beautiful evening with a nice breeze and I was looking forward to getting the tent up and, finally, a sit down. As we neared the base of Devil’s Peak we eventually found a flat grassy spot and decided to pitch our tents. I was so looking forward to this.

As I put down my rucksack and extracted my tent from it, the first of the midges arrived…. The breeze had disappeared with the sun behind the mountains, it was a dry clear night and the millions of midges in the glen could fly in the still air… Dinner had arrived.

Midges are pretty rubbish, they are slow fliers (about walking pace) so can't fly if it's windy, they can't fly when it's raining either (thank goodness). When conditions are right though, they make up for their shortcomings in immense numbers. It is the female midge that bites, she needs the blood for her eggs and there were now two mammals in her vicinity, in perfect weather conditions, breathing out CO2 and giving off distinctive smells.

The two mammals, Bob and I, were now miserable. Swarmed whilst putting up our tents, we had headnets on but the midges were everywhere, exploring every nook and cranny they could find of us to get a bite, to get some blood, then splat! I was slapping every part of me, I was a mass midge murderer - I generally like to leave insects alone so they can get on with their short lives, but midges, swarming and biting, they are deal breakers... Bob had given up cooking outside and retreated into his tent. He took this video, which can be viewed below, of the experience on his phone.

I soldiered on cooking my evening meal wearing a headnet and gloves. As soon as it was cooked I paced furiously backwards and forward. Midges are slow flyers, so if I walked fast enough they could not get me. Walking fast, back and forward on a short section of rough path, allowed me to pull my head net up and eat my midge laden meal…

The CO2 from the stove burner had also attracted the midges and they continuously flew into the hot flames and perished with a wee crackle and a visible spark whilst I was cooking. There were a lot of midges, there were a lot of sparkles, my stove had become a midge sparkler.. So many midges, burnt and unburnt, ended up in my chilli it was actually amusing - and great to get some blood back.

After clearing up I ran around to clear the swarm and then dived into my tent to avoid too many midges joining me. Of course many did but, something happens to a midge when it gets inside a building or tent - they suddenly just want out! I think the CO2 and pheromones in a confined space builds up so they go “blind”, they cannot home in, so instead they meekly dash themselves against the inside of the tent. With me safe inside and the swarms outside trying to get in, it was time to sleep with the total silence only broken by the occasional grouse call.

It was already daylight when I opened my eyes. It was quite chilly, this was promising - maybe it was too cold for the midges? I unzipped my tent,  it was clear and there had been a hint of frost. I climbed out as the sun peeked above the hills, thinking of making breakfast and suddenly they were there, again.  After my midge infused porridge,  I packed away my midge infested tent and we set off, heading East through rough pathless terrain to the river Dee. As we forded the river, it was a beautiful morning with a slight breeze, the midges were gone and the world was good again. Glenn GeusachanThe scene of our first nights encounter with the local midges. The River DeeLooking North along the Lairig Ghru, from below Devil's Point. Corrour Bothy can be seen in the distance

As we stepped onto the Lairig Ghru path, we were overtaken by a group of teenage walkers. They told us they were with an outward bounds group and that they had slept outside Corrour bothy as it was full. “The midges were terrible”, they told us, Bob and I nodded simultaneously. 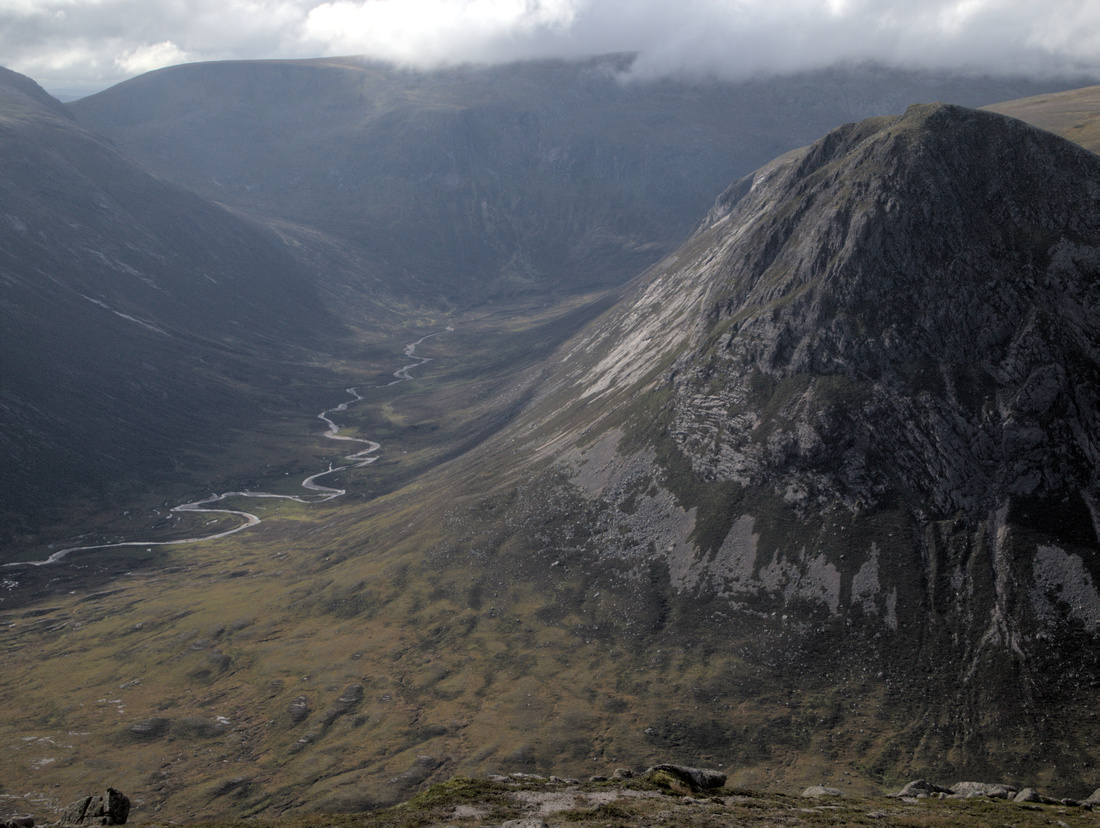 We climbed up the path towards Derry lodge, with the intention of peeling off and climbing Càrn a' Mhàim. It was a steep start and as we climbed, we caught up with the group of teenagers who were all sitting about on the path, we plodded past them and after a period of time they passed us again, only for them to be sitting down at the again at the next corner. This continued and I commented to Bob about youth being of no advantage to a steady plodding pace!

We continued up to the summit cairn of Càrn a' Mhàim where a runner appeared. She told us, as she ate sausage rolls ravenously, that she had done several summits already and was going to run several more in the afternoon! The runner was travelling light and I marvelled at her speed as she run away into the distance, skipping over rocks. 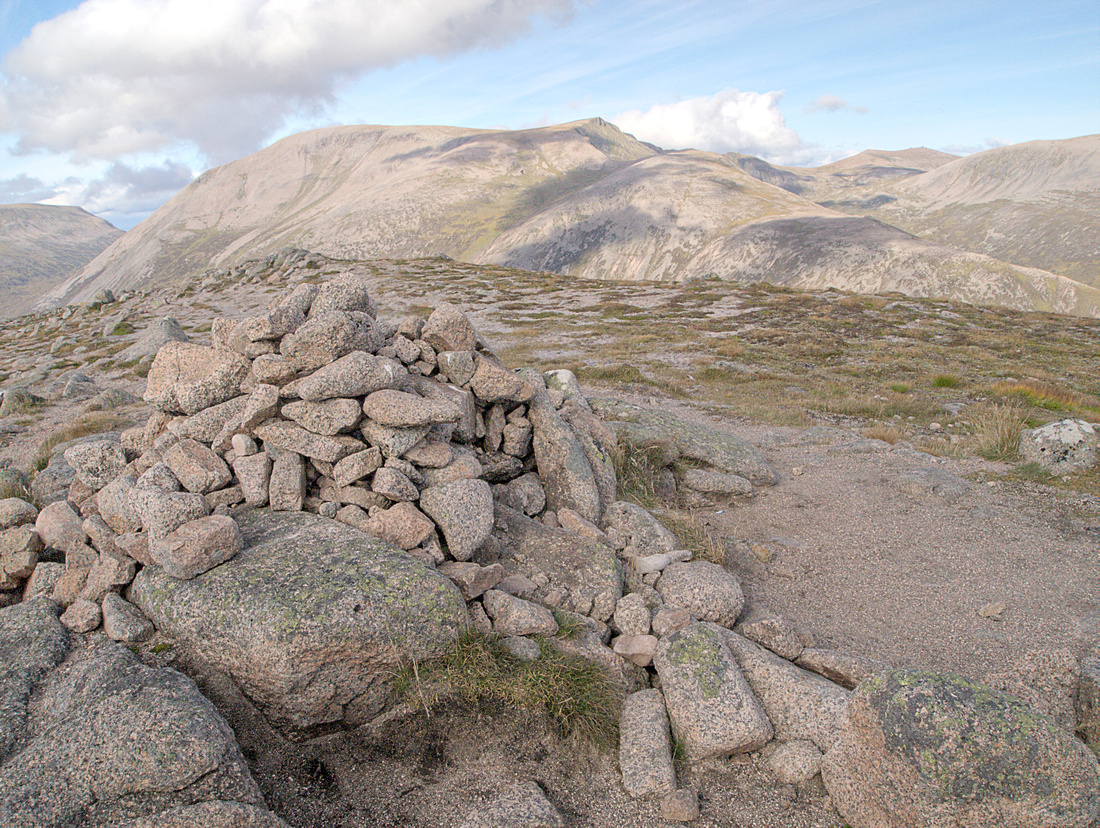 In comparison I was trudging over rocks like a lumbering tortoise with my heavy home on my back.  From the summit, we followed the broad ridge until we reached the base of the much higher Ben Macdui. After a brief discussion it was decided to drop down into the Glen, Allt cairn a’ Mhaim and head at low level to Derry Lodge, where we would camp for the night. The youth group had the same plans and it was a Hare and tortoise race to our destination with us pretty much arriving at the same time.

It was a beautiful evening as we arrived,  the sun was setting and there was a nice breeze.  I chose my camping spot across the river from a couple of tents and took off my backpack.  The sun disappeared below the horizon and the wind, obviously driven by the sun, instantly stopped. At this opportunity, the midges came out in large numbers and as I finished pitching my tent,  I simply dived in it and ate a few snacks before going to sleep,  my plans of a nice hot meal were again defeated. The midges had ruined the weekend and the extended stay, originally planned for another couple of nights, was not being considered anymore.

In my tent I could hear the teenagers setting up camp a short distance away and they were having a miserable time of it. I quickly went to sleep.

In the morning I emerged from the tent to a cloud of midges, I took a walk through the trees with my headnet on, munching on a breakfast of beef jerky, past the abandoned lodge only to discover Bob Scotts bothy. If only I had found this the previous night a midge free hot meal could have been had!

I started to take my tent down and suddenly heard a man scream loudly. He was screaming “F*****g Midges!!!” repeatedly in a strong Germanic accent in between shouts of “Arrghhh”. The man camping on the other side of the river had obviously retired into his tent before sunset and therefore had not encountered the Midges in the sun driven breeze. He must have woken up and unzipped his tent, unwittingly allowing the midges full ventilated access to his accommodation. On realising his error, he had jumped out of his tent and randomly run about furiously waving his arms and cursing loudly. He had no headnet; that would be a deal breaker for me. We continued with packing up our stuff across the river from him, trying not to laugh. After much cursing and arm flailing he finally run back into his tent and zipped it up quickly whilst muttering to himself.

Derry Cairngorm is a good climb and by the time we reached the summit the cold wind at this height smelled of winter, it was only September but it was piercing cold on the Rock strewn summit. 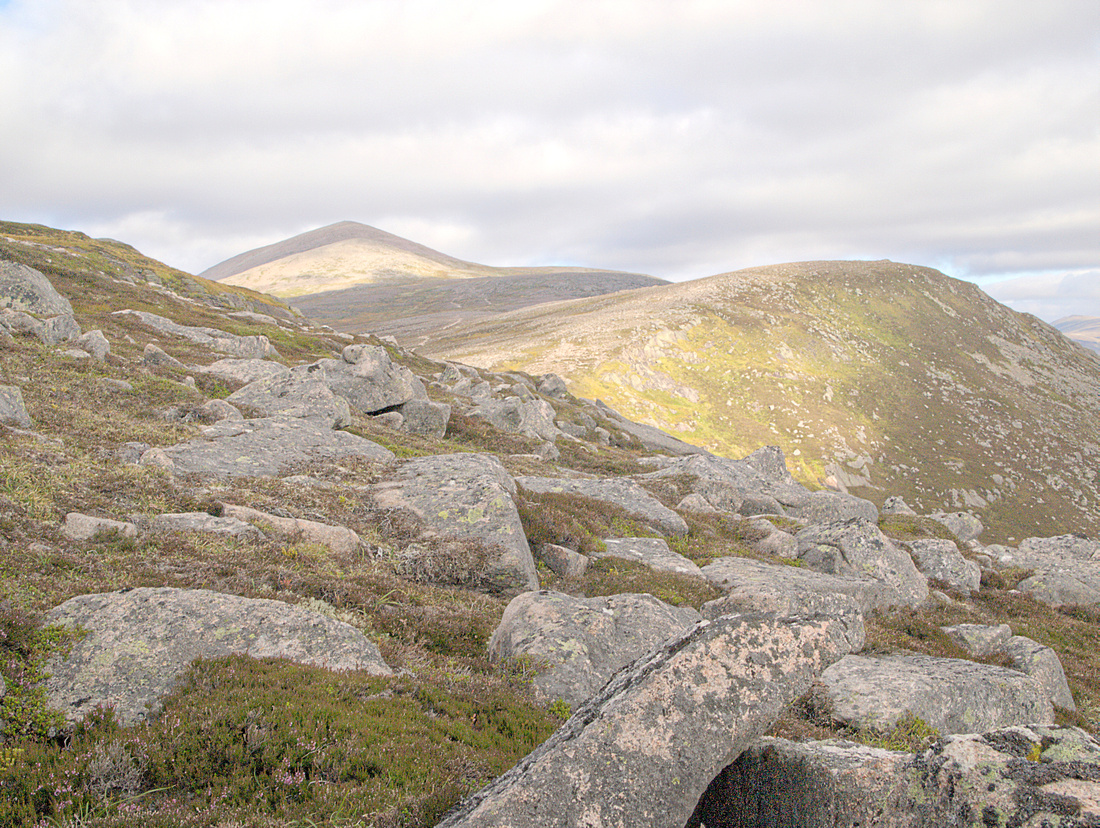 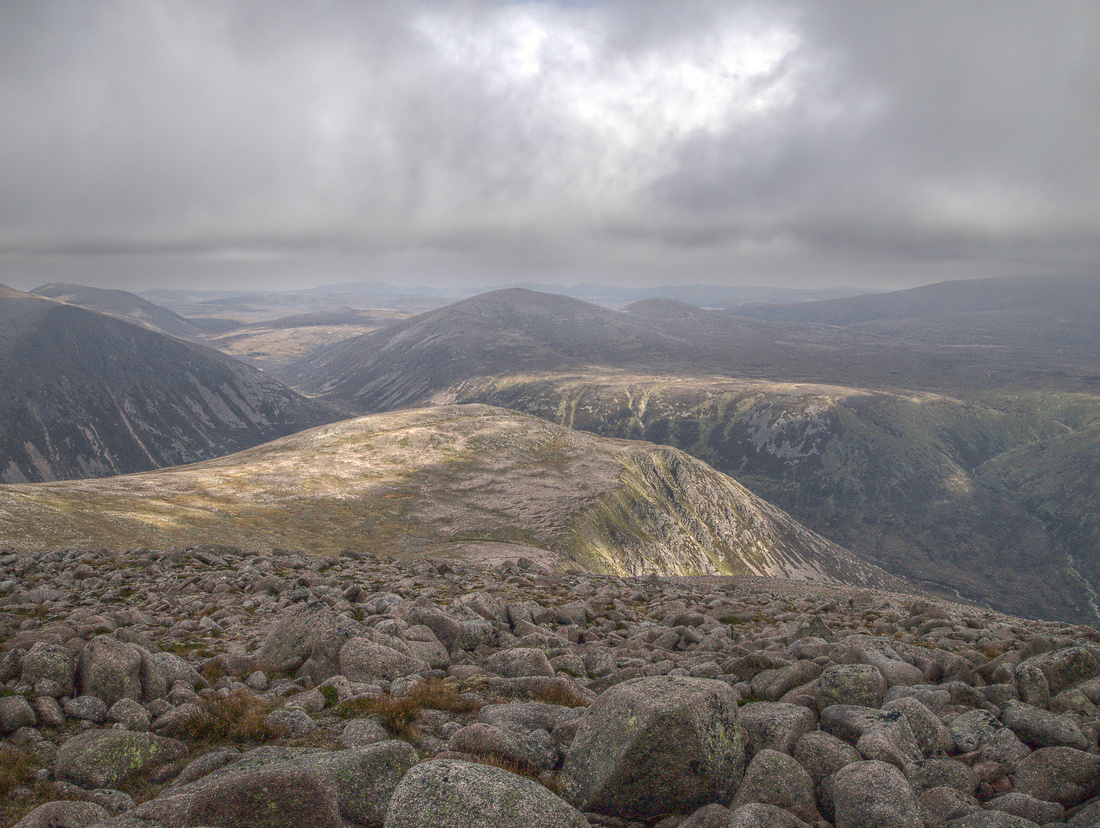 After a short stop, we headed back down and passed the now tentless Derry Lodge and empty Bob Scotts bothy on our way back to Linn of Dee. The midges had shortened our trip and we were fed up, I was now looking forward to home and its comforts. The joy of camping, to me, is being able to eat a hot meal after a good days walking and not be under constant attack from biting insects. Apart from what I have subsequently learned to reduce the amount of bites, the lesson here is to be flexible and maybe have the hot meal earlier in the day when it is windier and midge free. Flexibility is key here, where I need to learn to adapt to nature and don't expect it the other way round. 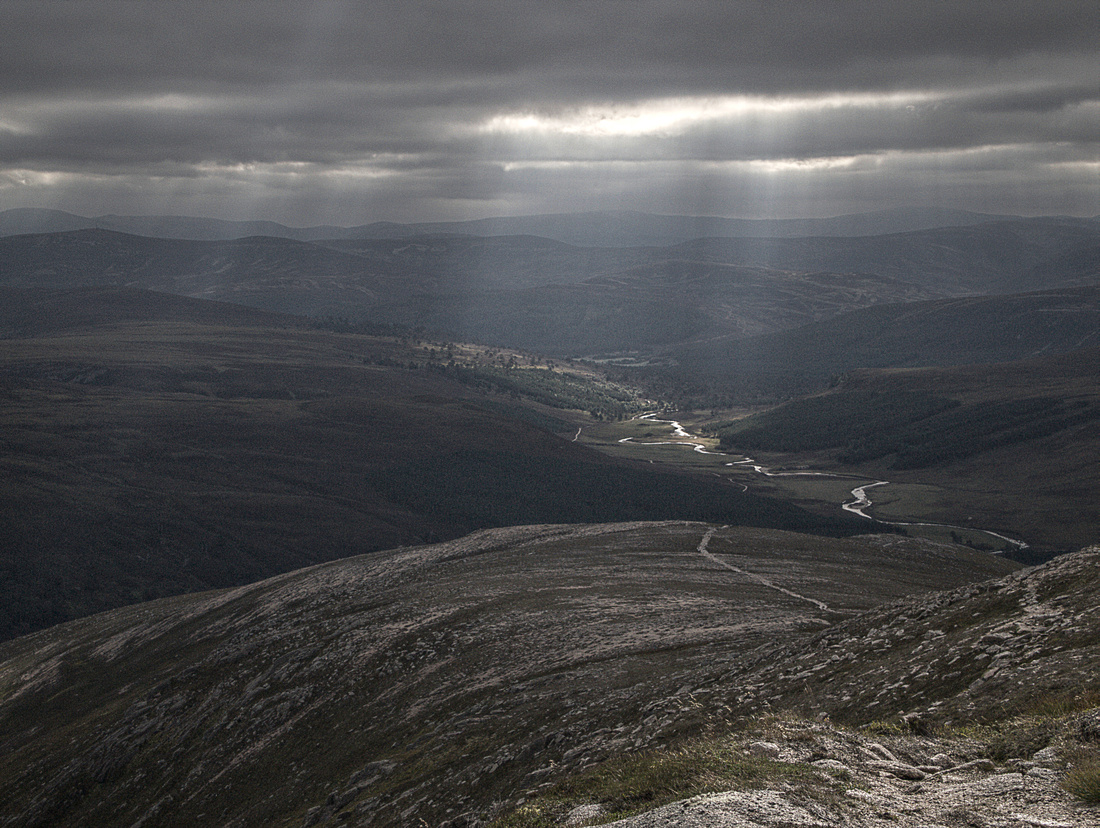