We have had a great spring but I have not been out and about much due to work and social commitments, with my backlog of writing and pictures also having to take a back seat. My only escape has been evening trips up the Ochil Hills with my long suffering wife Karen and her friend, Sarah.

With me as their guide, the ladies have covered a few of the higher Ochil hills so far this year and the next on the list was Ben Cleuch, the highest Ochil at 730 meters. We set off late and parked up the car at about 7:15pm. I was worried we were going to run out of daylight as that only allowed us 2.5 hours before sunset. It was however a bright and warm night so I expected at least another half hour of daylight after sunset - the head torches were in my rucksack though, just in case.

Up until recently both Karen and Sarah didn't really hill walk, but their recent jaunts up the Ochils has slowly acclimatised them to climbing steep slopes; they still moan though! As we left the car the first complaint I received was that they were bored with walking here as our previous two trips up Wood Hill and Craighorn have started from the same place, the Wood Hill woodland park car park. In anticipation of this I had thought of tackling Ben Cleuch from nearby Tillicoutry but the pull up The Law is a pretty intense climb and I did not fancy the additional moaning that this route would generate... I decided to take the safe route up the dirt track from the village of Alva that runs beside the Nebit as this is an 'express' route for fast access to Ben Cleuch, which lies further back from the steep slopes veering out of the Forth Valley.

We headed off through the woods and after passing the old silver mine we reached the dirt track and followed it as it zigs-zaps upwards above Alva. After passing the Nebit (which I never get round to climbing) and with the ladies already glowing from the climb so far, it was time to turn off the track and follow the grassy path up towards Ben Ever. This is quite a steep climb and as we walked past many sheep and lambs, I kept in front to avoid the moaning and complaining stares, with Digger kept on his lead to avoid any confrontations with the local livestock. 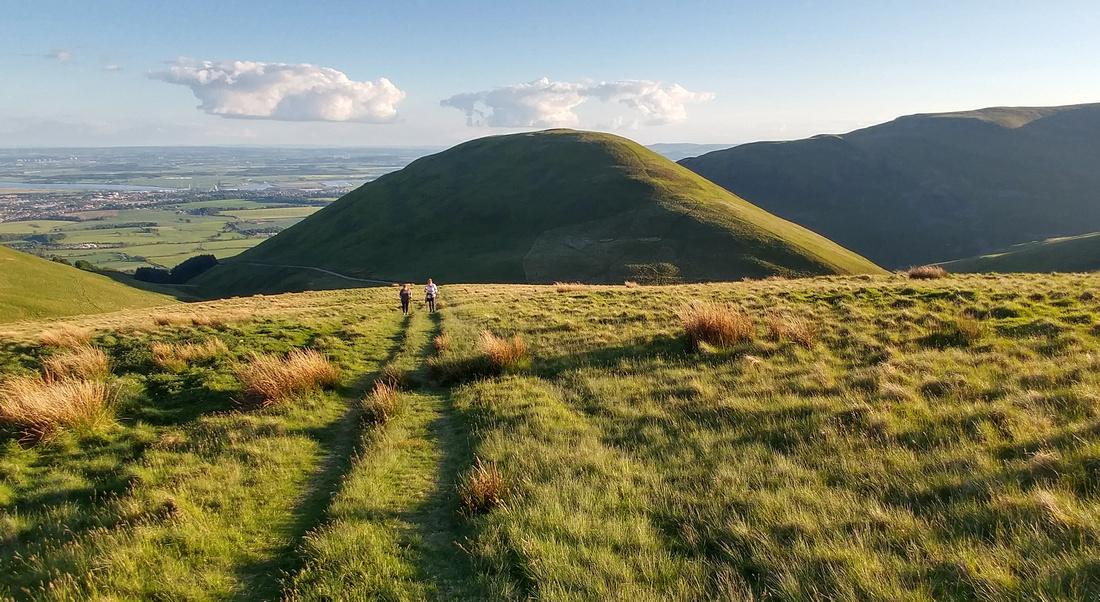 Halfway upThe easy bit on the climb up Ben Ever

As we topped the broad ridge of Ben Ever, Ben Cleuch was now in sight and its summit cairn did not look too far away...  I was outvoted with my suggestion to go over the top of Ben Ever and it was decided that we would use the bypass path to go round the top to avoid unnecessary climbing. My watch was consulted and I pointed out that we would probably reach the top about 9pm. This would give us no more than 90 minutes of fading light to get back down. Karen and Sarah eyed the top and looked back at the route we had taken, "we have come this far" they said, so we headed onward.

The initial climb from the col between Ben Ever and Ben Cleuch is a short but sharp slope and I took off up it to leave the ladies to moan amongst themselves. I waited near the summit for them to catch up and as they arrived they both glared at me as if blaming me as being the cause of their exertions. At the summit cairn the trig point was touched and the usual picture was taken so that they could post their latest conquered hill onto facebook. 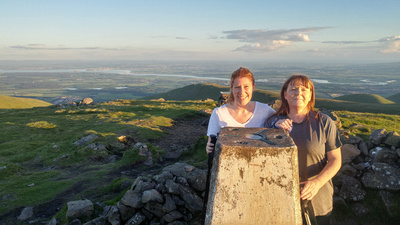 At the summitKaren and Sarah at the top of Ben Cleuch

   The picture below is from the summit of Ben Cleuch which was taken on a different visit a few years back. 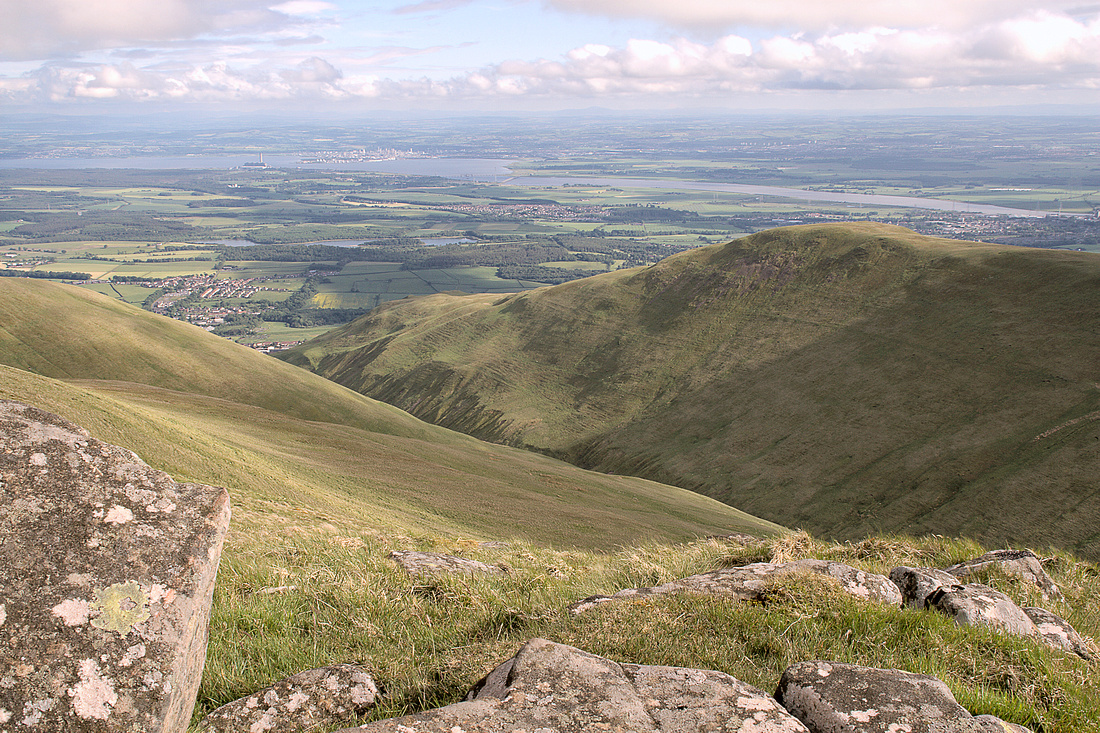 I took the picture below at the top of Ben Cleuch with my phone, looking northeast with the lowering sun was giving good light. 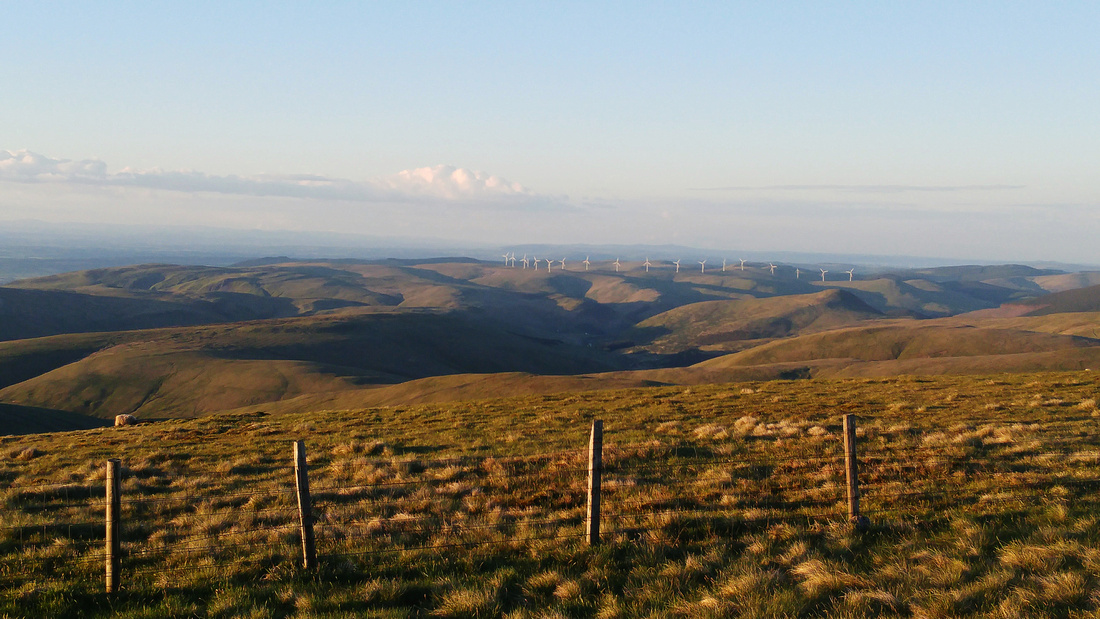 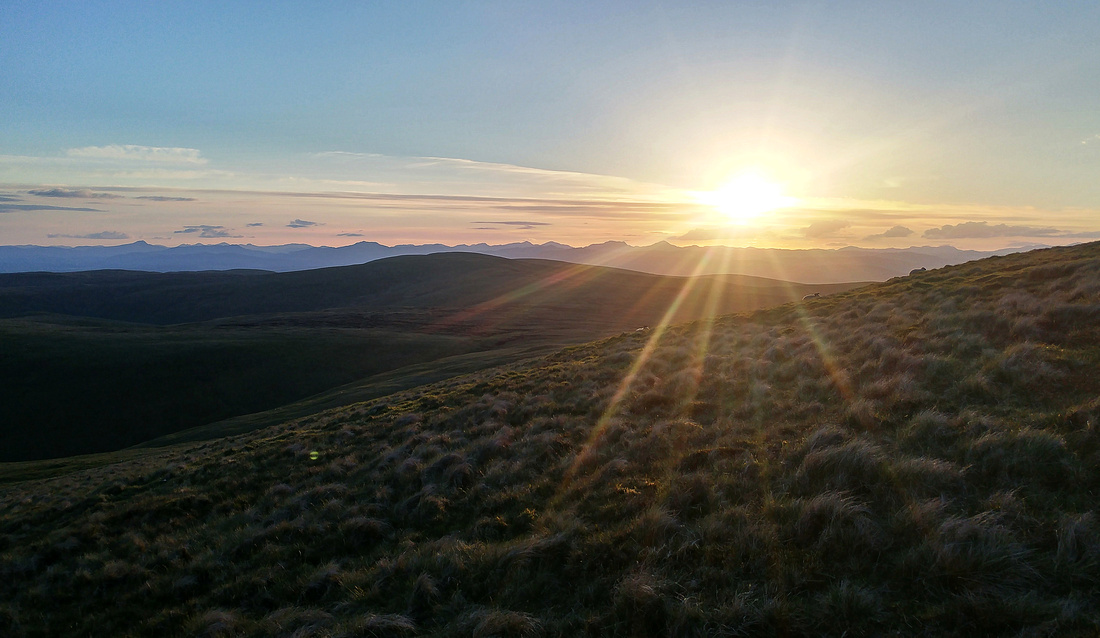 We left the summit at 9:15pm, the sun was getting lower and only the top peaks and ridges of the Ochils were still lit, with everything else in shadow. I had considered whether it would be quicker coming down The Law into Tillicoutry Glen, but decided against it as the route we had came up would be a safer bet if we run out of light. We took off at a good pace knowing that we were now racing the night and at the col I decided to take the path to the top of Ben Ever and told the ladies I would meet them on the other side, where the bypass and summit paths meet. I had not bought my camera as I didn't think it worthwhile (!) but here was I on the top of a hill with the sun setting. At least I had my phone and I took a few shots missing  the zoom lens that having my camera with me would have provided. 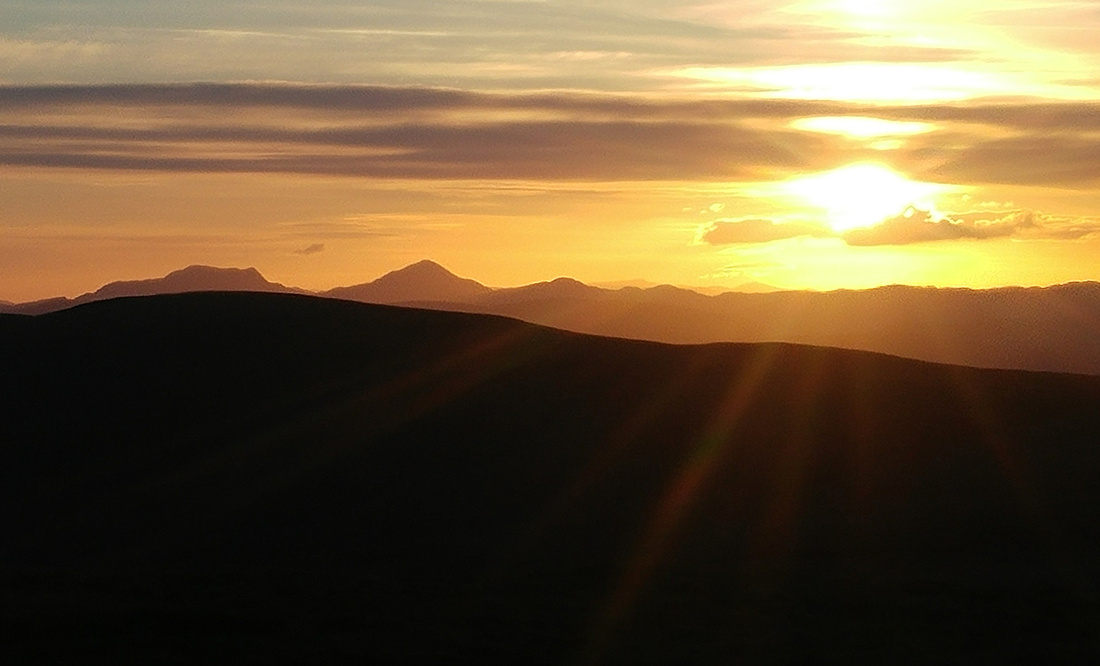 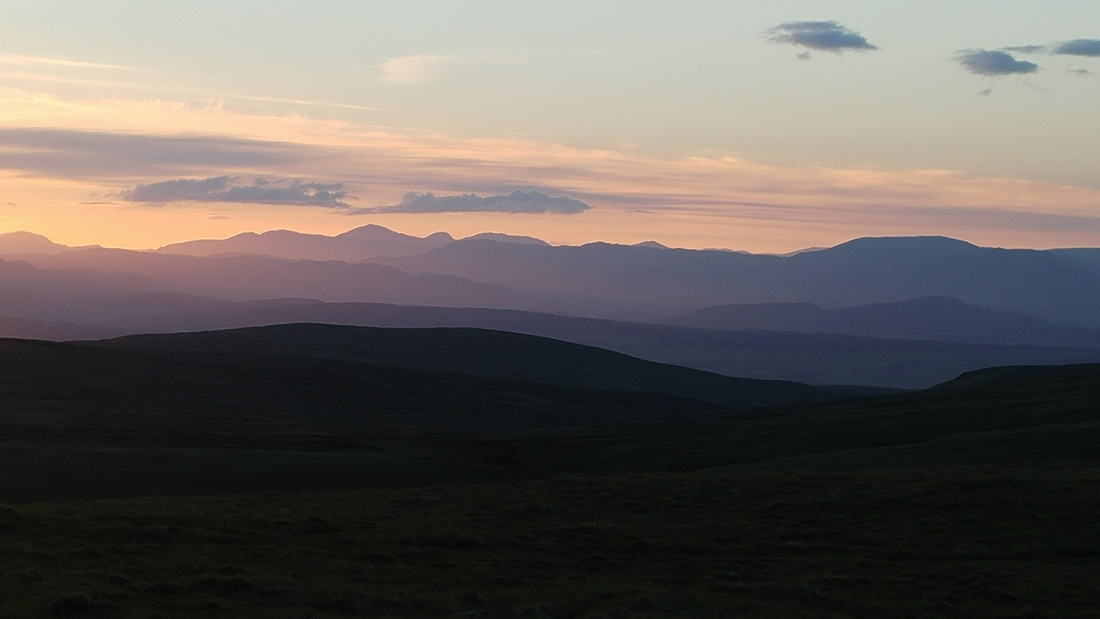 When I finished taking my snaps, I looked down the hill and saw that Karen and Sarah were already at the bit where I was to meant to meet them, they had stopped and very nearly took the wrong path along the long ridge towards the steep wood hill. Luckily though they realised, waved up to me, then raced off down the Ben Ever slopes leaving me to hot foot it after them. I finally caught up with them halfway down and we finally reached the track about 9:50pm - good going. As we walked down the track towards the zig-zag over Alva, I pointed out to my companions that the car is parked at about 50 metres elevation so they had climbed 680 metres... This kind of information is best held back until after the climbing is over!

We finally reached the Wood Hill woods and there was just enough light to see the path back to the car. We walked this last stretch through the still and humid woodland with bats whizzing silently about us, their speed and agility is amazing. We reached the car at 10:15pm, not having seen a single person the whole time. The light was now fading fast, but we had done it. We jumped in the car and headed home with that sense of achievement that only fellow walkers understand.

As it stands Karen and Sarah have still to climb the following (larger) Ochils - The Law, Andrew Gannel Hill, Blairdenon Hill, Colsnaur Hill, Innerdownie and Ben Gengie / Craig leith - I will leave that one till last...