The late Harry Keen, who was a dear family friend, recalls his memory of New Year as a child in early 20th Century Edinburgh. 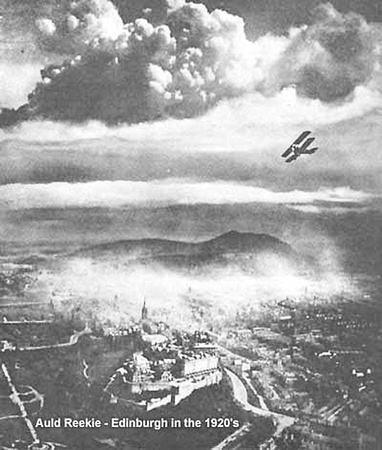 Auld ReekieThis ariel picture of Edinburgh was scanned from a family book called Wonderful Britain by JA Hammerton, printed in 1920.

In the Scots it means, the last day of the year or, a gift given to children on New Year's Eve

the very word conjures up a mixed bag of images, from when I was a child growing up in Edinburgh, right up to the present day. I suppose that as we get older, the celebrations of yesteryear grow in grandeur and gaiety, as our memories get dimmer. Strangely enough, my memories of Hogmanay celebrations of the past are very vivid in my mind and I can remember who and what relatives appeared first at the door after the bells. Which Auntie used to get drunk the quickest and who would eat the most Black Bun and who would be the first to get up and sing.

When I was a child, I remember what great excitement there was in the house prior to Hogmanay, My Mother was (it seemed to us kids) always baking and cleaning one thing and another. She would start days before, making and cutting the sausage rolls and shortbread and lots of other goodies, one of which was the Ne'er day Cloutie Dumpling, with the silver threepenny bits in, wrapped in waxed paper, which we couldn't touch on pain of death, they were for the Hogmanay.

Then on the Hogmanay, she would take all the bedclothes and our clothes, in an old pram, up to the washhoose in Simon Square, just above the Deaconess Hospital in St Leonards, Edinburgh. She would then give them a thorough cleaning. I remember these old wash houses with their big wash tubs and the drying racks which used to come trundling out of the wall. The steam and the noise, and of course, the chatter among the women.

On that day, the house was cleaned from top to bottom, the fire was cleaned out, the grate was polished with black lead and then the fire was relaid, ready to be lit after tea time. From the start of the year, after the 1st of January, my mother would put money away in a drink club at a Grocer's shop. All year until the Hogmanay when my Father would go and collect the booze for the festivities.

This was a trip to the other side of town and sometimes we were allowed to go with my father and help him lug the booze back on the bus. We were thrilled to travel on the bus as most times we had to walk everywhere. Father and my brother George and I would collect it in the thick paper bags and struggle to the bus stop with it, being warned constantly "dinnae drop that bag mind". Once on the bus we would go upstairs to the front while my father sat in the back and smoked.

From the front of the bus, we could see other fathers carrying their paper bags with the festive bottle or two peeking out of the top and kids like us helping..

Once the house was clean and ready for visitors, we, the children would be washed, scrubbed and put into clean clothes, dared to get ourselves dirty and told to play in the bedroom while my mother made all the sandwiches, cooked off the sausage rolls, sliced the Black Bun and broke the shortbread. She then got all the glasses ready, set out most of the bottles of Whisky and Beer and then she got herself ready to greet the New Year.

He would wait for the bells to chime midnight to be the houses first foot. On the last stroke of the Bells, he would ring the doorbell, my mother would answer the door and he would wish all in the house, a Happy New Year. He would pour a Whisky for my mother and any other adult in the house at the time. We would get a glass of Vimto or Iron bru and we would all wish each other a Happy New Year.

It was after Hogmanay that we kids received our presents. We would only have a stocking on Christmas morning. My parents celebrated the New Year rather than Christmas, as a lot of Scottish families did and it was a bit strange to us to see other kids with presents on Christmas morning instead of New Year's Day.

During the early hours many people would come to the house, bringing with them their bottles, usually a half bottle of Whisky and the party would start sometimes lasting for days.
When we kids became teenagers we would go up to the Tron Church down from the Castle and gather there. Here we would often try to hit the clock by throwing an empty bottle at it. We never did of course but it was good fun to try.

We would wait for Midnight when we would kiss all the girls, who would let us, wish each other a Happy New Year and drink from each others bottles. Then we would First Foot everyone we could think of.
No one ever had their doors closed, anyone could walk in and join the party as long as they had a bottle in their hand.

On New Year's Day itself, relatives would join us in a Ne'er Day Dinner which was always my Mothers 'Red Broth'. This was a mixture of Scotch Broth and Tomato Soup, followed by the Roast Pork, Roast Tatties and the Cloutie Dumpling. Oh, what excitement if we found a silver threepenny bit, it was ours to keep and spend.

The Table was read and once again, the drinking and singing would go on to the sma' hours.

I remember when I was in the army, the Scots would volunteer to stay in camp to do the various guard and cookhouse duties over Christmas and let the English go home so that we could be home for the Hogmanay. It was our festive season - Christmas didn't mean very much in the way of celebration except as a remembrance of Christ's birth. We didn't attach to it the same festive spirit as other nationalities did.

Those days have gone now. There is not the same, I would say, reverence, if thats the right word, paid to the New Year's Eve, Hogmanay celebration. There is more of a disco-type atmosphere, more and more people are celebrating in Discos and clubs, especially the young ones. But then, there were fewer clubs as we know them today, and definitely no discos. Dance halls like the Palais in Fountainbridge or Fairlies down the Leith walk were the meeting places for the youngsters. The old style of celebrating at home and in each others homes has gone, except perhaps with the older ones like myself.

I still clean the house on Hogmanay morning, and my American wife marvels at this but never tries to dissuade me. I still have the Shortbread and Black Bun and make the sandwiches, though more often the stuff is bought from the supermarket, except for the shortbread which is still baked by myself

In fact on Nee'r day itself the tradition in our house is that all the family come over to my house and we have Curry, lots of it, in fact about 11 or 12 different ones with the Sambals and various rice dishes. This has been our tradition for many years, ever since I left the Army and settled in Blairgowrie. The husbands and wives of my children have come to love it as much as we do.

There is no longer a fire grate to be cleaned, central heating and gas fires having taken over, but still in the older folks homes, there is that reverence for the Hogmanay that cannot be extinguished. We can sit by the fire and think of Hogmanays past listening to the last stroke of Big Ben echoing out of the radio, instead of the Television. I can still hear my Father's knock as he chaps to come in to first foot us My Mother's soft voice as she says, "There's yer Faither at the door". The singing as the revellers come up the stairs. The shouts in the street of "Happy New Year" and the chorus of "Auld Lang Syne" being sung in every household in the land, from Croft to Big House.

At that special time of year all we had were friends, no enemies. We loved one another, as long as we were all Scots and still sober, although others like the English were welcome at that time of year.

We were a' Jock Tamson's Bairns, whatever else we were at other times of the Year.

It's seeven oclock, get up an' aboot
There's lots tae dae, too much a' doot
Get the weans washed an' oot tae play
It's the thirty first, it's Hogmanay

Get ben the hoose and strip the bed
An' see an' get the table read
Get thon hurley oot o' sight
Fir later oan, it's Hogmanay night

Rake the fire, tak the ashes oot
An' dinnae scatter them a' aboot
Keep them off o' the landin' flair
Fir it's yer Mithers turn tae dae the stair

Get the sausage meat oot o' the press
An' mak sure yez dinnae mak a mess
There's the booze tae get, "is yer Faither away"?
Cos the nichts the nicht it's Hogmanay

The hoose is clean, sandwiches made
You bairns 'ull juist hae lemonade
Get doon the street fir yer Auntie May
She'l want tae be here fir the Hogmanay

Noo, a' things ready fir fowk tae come in
Fir neebours an' wir kith an' kin
They cam fae a' the airts this day
Fir abuidy's hame fir the Hogmanay

Yer Faithers here, the bells have rung
An' auld lang syne has juist been sung
A Guid New Year tae a' I say
It's January first, an' New Years Day

Sae lift yer gless, mak sure it's fu'
An' heres a toast fae me tae you
Tae young an' auld, fae far an' near
Hae a Happy, Healthy, Guid New Year"

Footnote: Harry volunteered to write this article and poem for my then website in 1999, which I published as a newsletter for the millennium.  Harry sadly passed away in 2015 aged 83, so I thought it right to again share his wonderful memories and I will post it every New Year!