Glen Affric is a beautiful glen of ancient Scots Pines and soaring mountains. I'd been there before, but it was time to revisit.

Having a long weekend available, I decided to take a drive up to Glen Affric in November, for a couple of nights wild camping and to take some pictures.

It's a four-hour drive from me to get there with a further two-hour walk to the end of Loch Affric where I knew from my previous visit that there was some good ground for camping.

After leaving the car park and crossing over to the south bank of Loch Affric, I marched along the path seeing evidence of electrical cables being installed into the side of the path. As I reached the burn that runs towards Affric lodge, my heart sank. The raised bank to the east of the burn had been excavated for a hydroelectric scheme. I'm sure that the ground will be reinstated, but it will never be the same as when we camped here in 2015 when we awoke after a cold frosty night to a glorious sunrise. 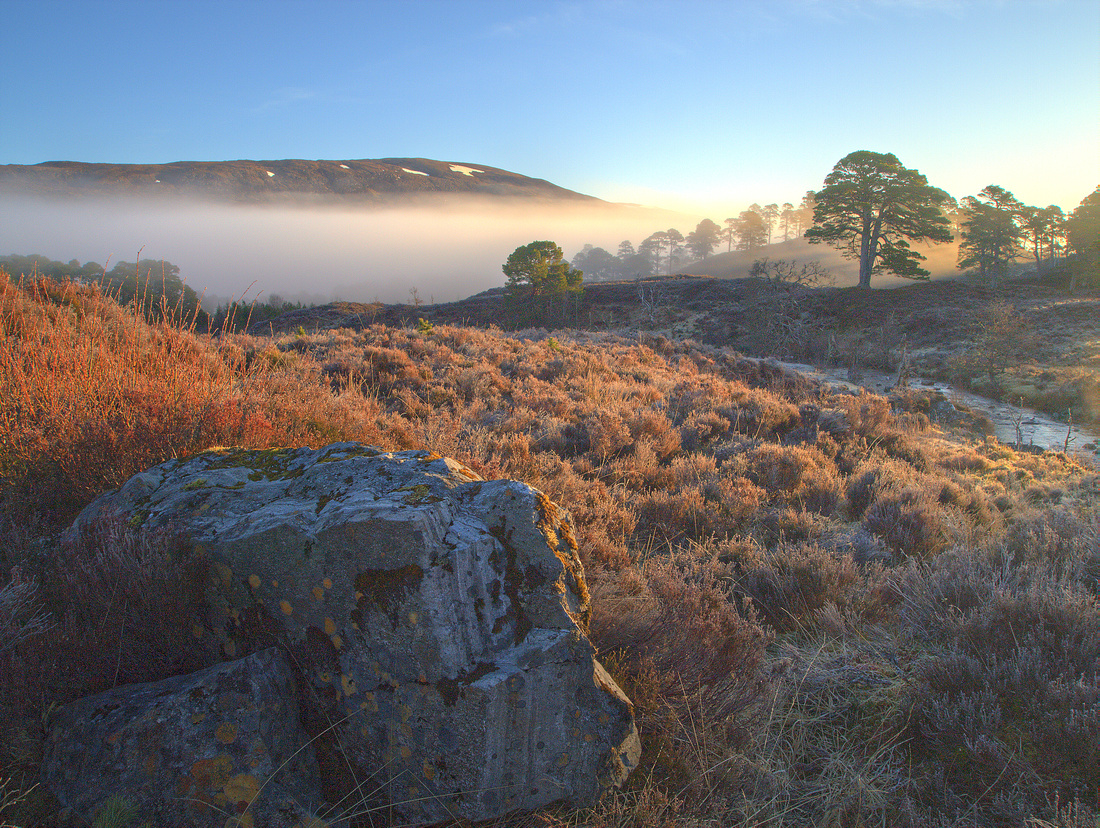 Glen AffricEarly morning in Glen Affric after a cold night

It seems that whatever I find beautiful and take photos of, whenever I return I am always saddened by the relentless march of civilization, no matter how well-intentioned. 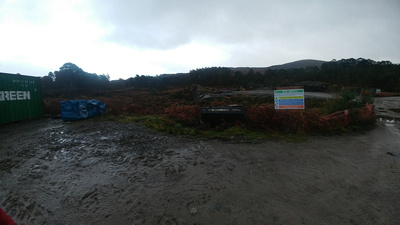 Hydro Scheme at Glen affricThis is the compound for the hydro electric works. I took a picture of a sunrise just at the edge of this location just a few years earlier. 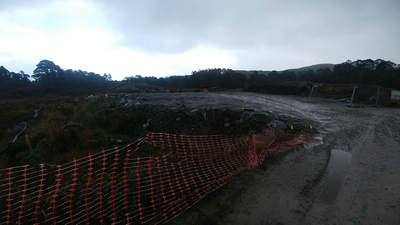 Hydro electric works at Glen AffricThe picture above was taken from the edge of this location just a few years earlier.

After taking a photo of the temporary depot near where I'd taken the photo above, I marched on with a heavy heart towards my destination, hoping that I’d make it before nightfall. It had been raining but as I neared my destination the clouds cleared the hilltop revealing a fresh dusting of snow, the first of the year, so I stopped to take a picture in the fading light. 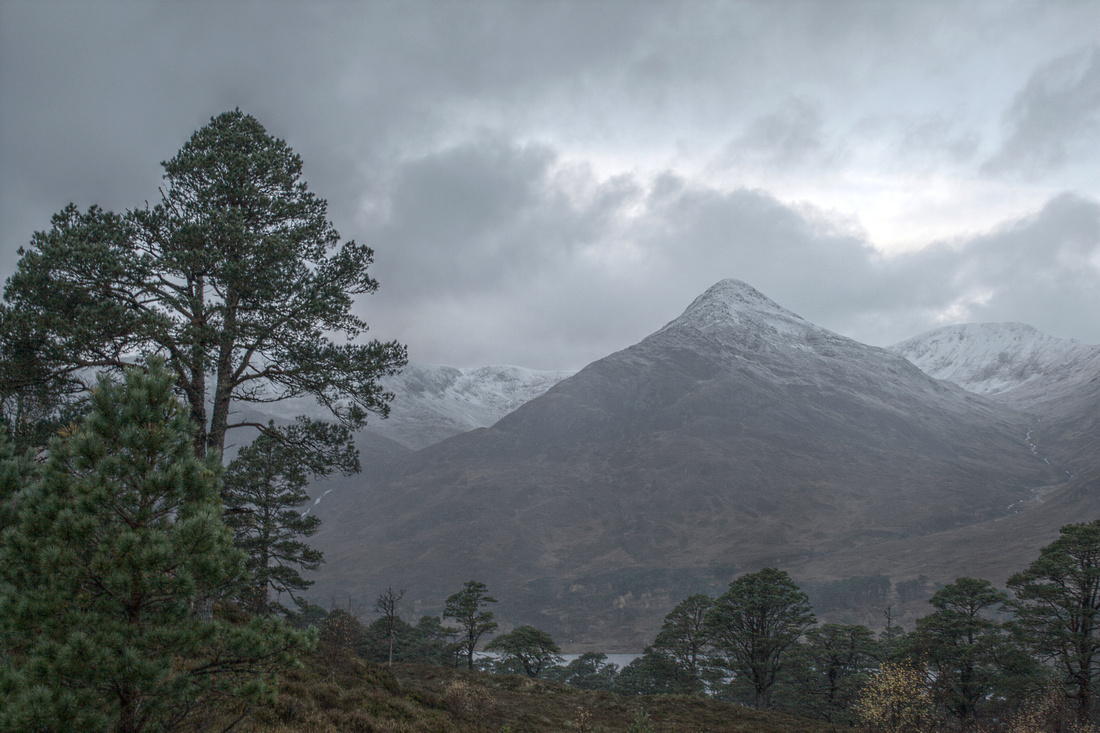 Glen AffricFirst snow of the year has just landed.

As I cleared a rise to finally see my destination, I could see a tent had already been pitched by the loch. I could also see a new addition to the landscape, a small cabin and the occupant of the tent was sitting on the porch of this building eating his dinner.

I descended from the high-level path down to the lochside and approached the cabin to introduce myself.

I found out that my fellow camper was Stan, a young man in his twenties from Belgium who was walking the Affric Kintail Way. We spoke for a while before I pitched my tent and made my dinner.

We spoke about this new (locked) cabin in which porch we were sitting to cook our dinner and escape the rain showers. This cabin had not been here the last time I had passed and although I didn't like the new addition to the landscape, I was being a bit hypocritical as I was using the bench in the porch to keep dry as I cooked my dinner. 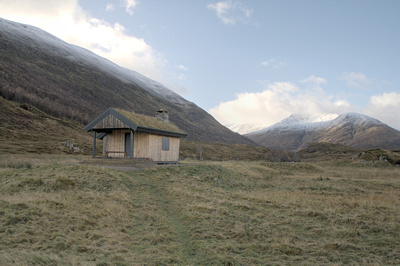 Cabin at Loch AffricAn owl was making great use of the porch and had made an awful mess!

Cabin at Loch AffricStan takes down his tent

The porch was also a well-used shelter by a local owl as evidence of the owl’s regurgitated meals was all around my feet. The fact that the owl was getting the best use of this cabin gave me some consolation over its appearance in this wild landscape.

After a while, Stan produced some whisky and offered it to me. Never being one to refuse a malt, I chuckled to myself as I'd intentionally left the house to escape booze and have a dry weekend. It never ceases to amaze me that wherever I go thinking that I can escape booze. It is always there waiting for me, willpower is the only escape ultimately as hiding from it in the landscape doesn't work.

Stan and I sat on the porch well into the night, sipping his whisky and talking as the clouds cleared and the moon rose over the wind stirred Loch Affric. It was a pleasure to spend the evening talking to this good-natured visitor from Belgium.

After a great night's sleep in my tent, I awoke and made my breakfast on the porch of the cabin. I shared some coffee with Stan who enjoyed a hot drink as he had been living off water and whisky travelling lighter than me.

After breakfast, Stan packed up and headed off to his next stop, Camban bothy, whilst I left my tent pitched and headed eastward on the rough terrain at the shores of Loch Affric to get some pictures.

The rough ground was slow going and the time ticked away quickly. I got to a beautiful location to take pictures, but the sun had taken a long time to clear the surrounding hills and the light was harsh. I headed back to my tent. 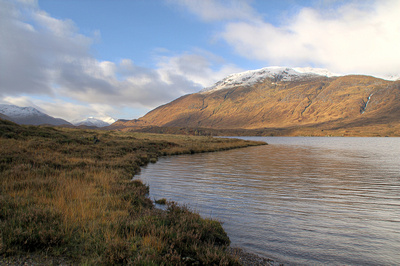 Walking along the banks of Loch Affric 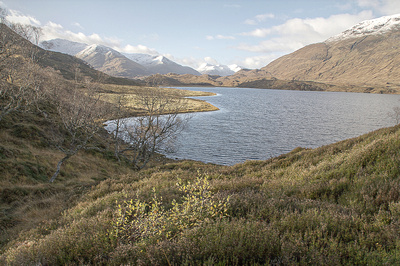 After lunch I packed my tent and headed up Glen Affric to Strawberry cottage, taking pictures as I went. At the cottage, I decided to head eastward along the North side of Loch Affric to find a suitable location for the next nights camp. 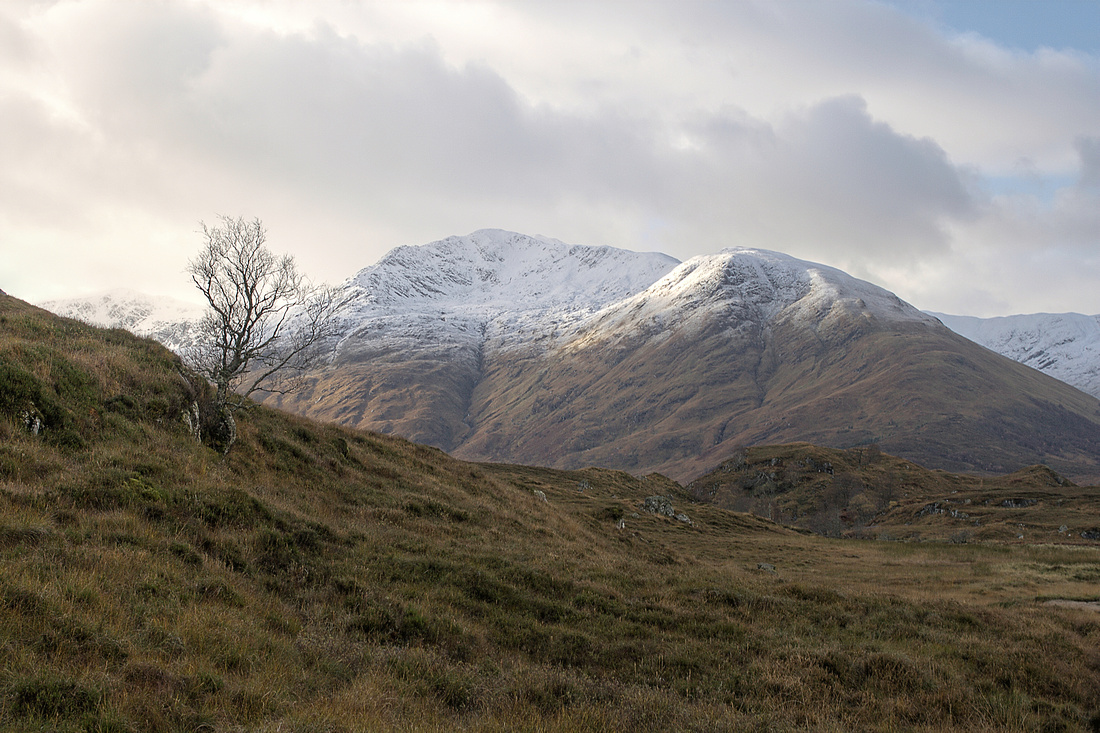 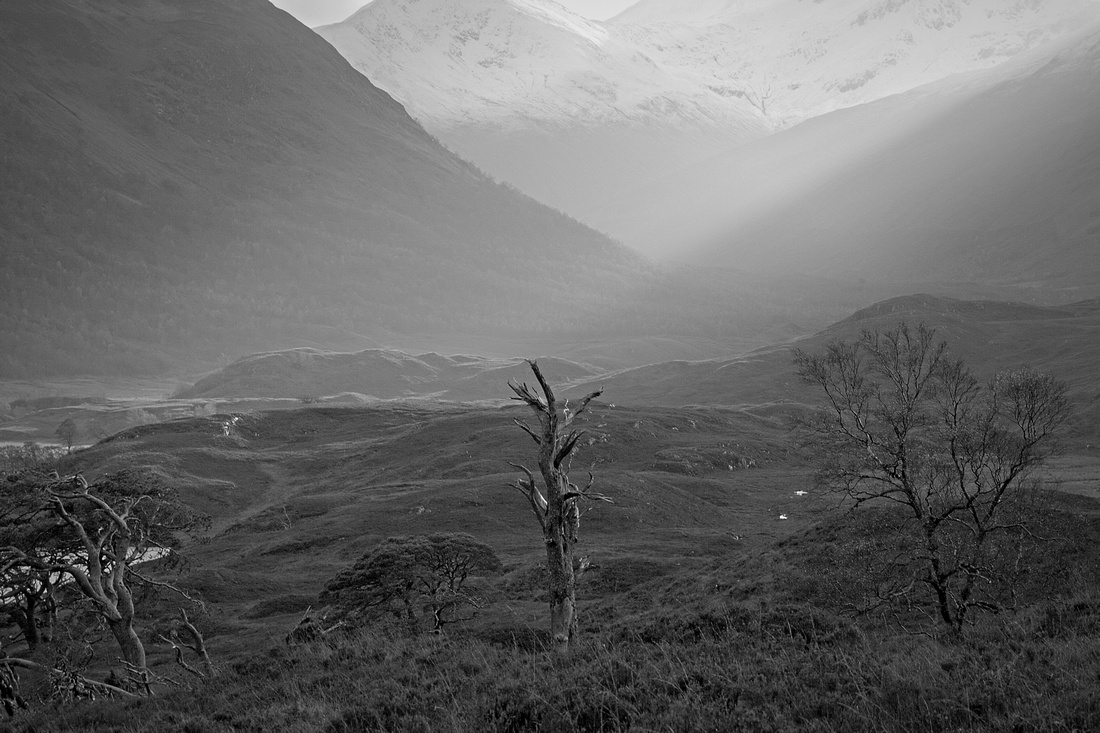 The terrain is rough when you leave the path, the heather is deep and it was difficult to see a suitable spot to pitch a tent. This is tarp and bivvy country where it is probable that a suitable spot beneath the old Scots pines could be found, but with a tent suitable flat ground was difficult to see. It's slow going too off the path, so don't plan to find a wild camp spot in a hurry. It will take me a good few more visits to better know this place and my jaunt around the loch over two days is too fast to get to know anything. 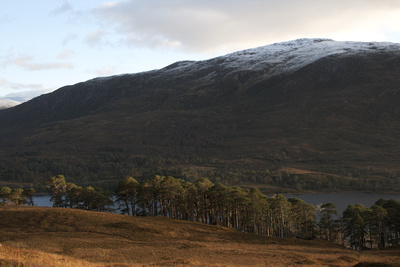 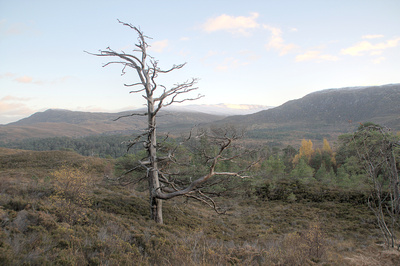 I couldn't see an easy spot to camp so I kept walking. Around sundown, I reached my car in the car park with its "no overnight camping" signs. Some people had found a good spot to camp nearby, but there was no room for me, so I jumped in my car and drove home.

I will be back with my tarp next winter and this time I will take my time to explore and enjoy. This is just one glen and there is so much to see and to photograph, you could spend a lifetime here. 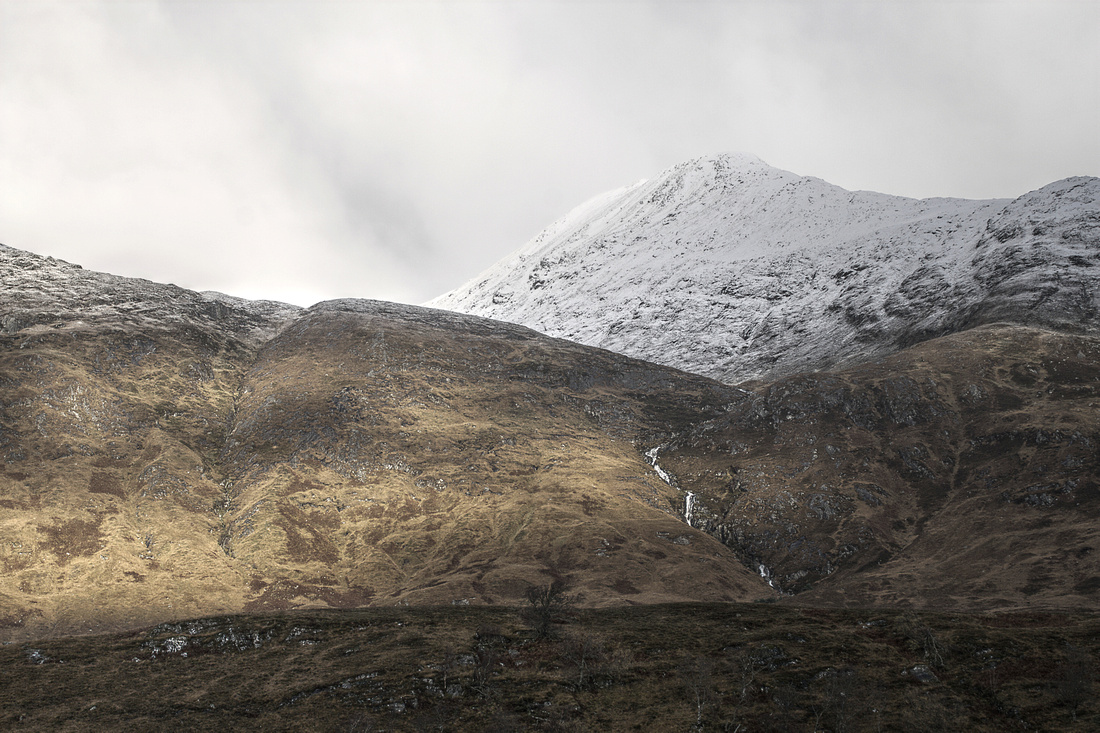