Sandwood Bay is a remote beach in the far northwest of Scotland. It is isolated and beautiful with a fine bothy nearby that has an interesting history. 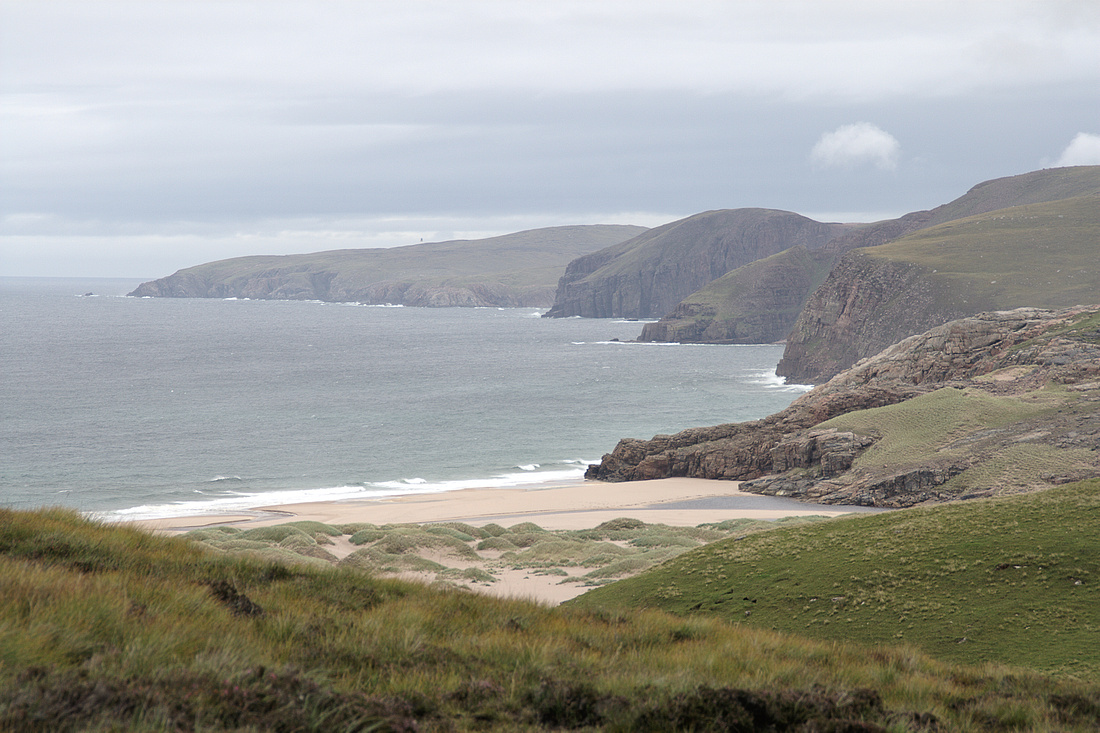 After having walked four miles under grey skies across dark moorland, I was confronted with this view over Sandwood bay. In the distance, the top of the Cape Wrath lighthouse could be seen and this marked the most northwesterly tip of the Scottish mainland. This is where the Atlantic Ocean batters against the cliffs with no other land between this point and Newfoundland, 2,500 miles to the west, or the closer Faroe Isles, Iceland or Greenland to the northwest.

I was here with my friend Bob and his sister Susan. The reason for the visit was that Bob had once promised to bring Susan here and he had kindly invited me along - I jumped at the chance for a trip away. It was a Saturday afternoon and we had travelled up from Ullapool. The weather was windy and overcast with the odd patter of rain, but the wildness of this area suited the mood of these conditions. we headed to the beach and sat for a while. 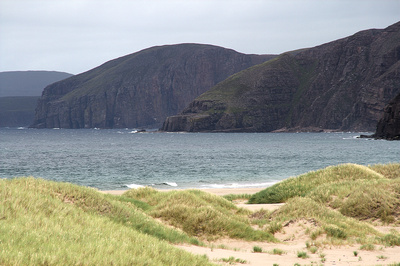 Towards the cliffsSitting on the beach at Sandwood Bay taking in the view. 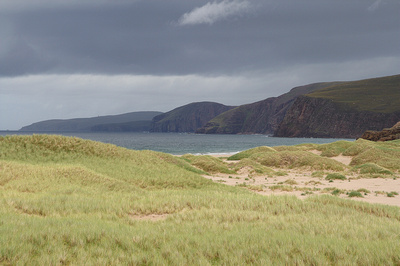 Looking North from Sandwood BayThe lighthouse at Cape Wrath, the far northwest corner of Scotland, can be seen peaking over the headland.

It wasn't sunny, but the blue-green colours of the sea, the yellow of the sand and the pastel greens of the dune grasses made for a refreshing sight amongst the dark moors, dark cliffs and grey heavy skies. We could also see the sea stack to the south of the bay,  Am Buachaille, that appears in the many pictures that I have seen of this place. 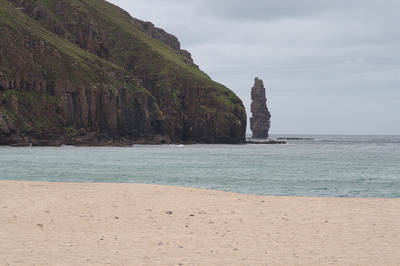 Am Buachaille the Sea Stack at Sandwood bay 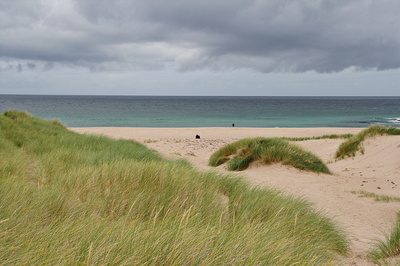 The colours of Sandwood BayI'm told that this beach is a lot busier than it used to be. Before the path was built it was a four mile slog across bogland. For most however, 12 people are easily hidden on a mile long beach.

We sat and enjoyed the views for a while and discussed whether we would camp in the dunes or whether we would continue onto Strathchailleach bothy, a place that I've always wanted to visit due to its intriguing history. Luckily, Bob and Susan agreed to go to the bothy on accounts of the strengthening wind and rain showers. We headed along the beach and waded the river at the end of the beach then headed up over the hill towards our destination.

According to the map, the bothy looks an easy 1.5 miles (2.5km) from the beach, but it isn't easy to get there. There is no path and in the worsening weather it took us longer than expected over boggy ground - we were fortunate too it had been an exceptionally dry summer. We had to check our map on a couple of occasions to ensure we were on track as we headed over the hill and past Lochan nan Sac towards it. Eventually, we reached a fence and then I noticed a little chimney pot sticking up in the distance - this bothy is not the easiest to find so it's advisable to ensure that you can navigate if heading here in bad weather, or in the dark, or you could easily get lost in vast moorland. The fence and the river that go past the bothy are the things to look for in poor conditions. As we reached Strathchailleach, the weather closed in and the rain came down in sheets. It was early August but it certainly did not seem like it. Here's a video that I took of the bothy and its surroundings in between showers.

Strathchailleach BothyTaking in the bothy and its surroundings in weather that does not hint that it was early August.

Strathchailleach bothy has an interesting history as a hermit had lived here for thirty years until 1999. He had lived in this building with no electricity, no toilet and with only the running water in the stream outside and the nearby peat bank at the river for fuel to keep warm. Every week this hermit would walk a 21 mile round trip to the nearest shop for supplies paid for by his army pension.

The hermit's name was James McRory Smith, but he was commonly known as Sandy. There are far better accounts of the story of Sandy than I could tell and this article is one of them. I was glad to have made it here so I could see for myself where he had lived and I could look at his paintings. 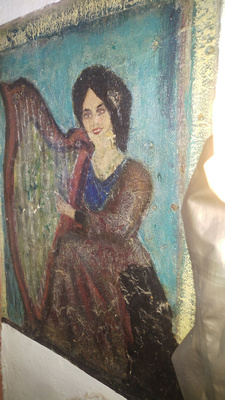 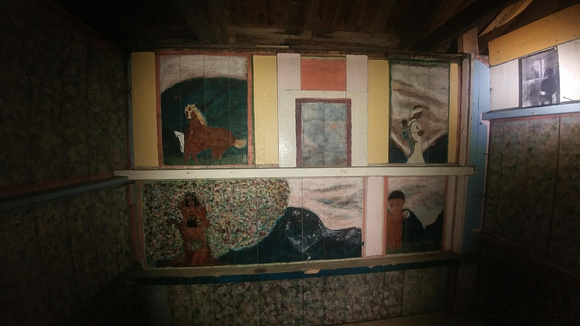 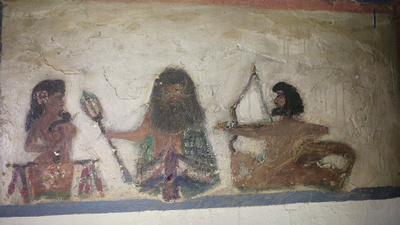 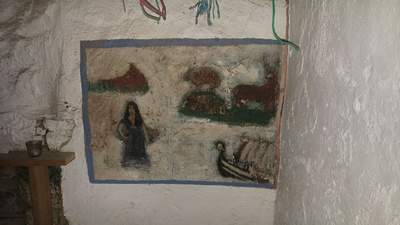 We settled into the bothy and we were not alone. A walker from Switzerland who was completing the Cape Wrath Trail was here, we were soon joined by a couple from Germany and then later on a party of four who worked at a local hotel joined us. They were from New Zealand, Australia, Scotland and Spain. After dinner, the fire was lit using the plentiful supply of peat that the river exposes nearby. It was a cosy night with lots of friendly discussions and a lot of wine - I retired quite early in fact with a good belly full...

In the morning everyone went their separate ways and we set off for the return journey via Sandwood bay. We decided to follow the river to the coast and take a less direct, but more scenic route. We followed the river past the banks of ready-cut peat and we eventually reached a waterfall where the river cascaded downhill to meet the sea. on the way, at the highest point, we could see the stack Am Buachaille in the distance. 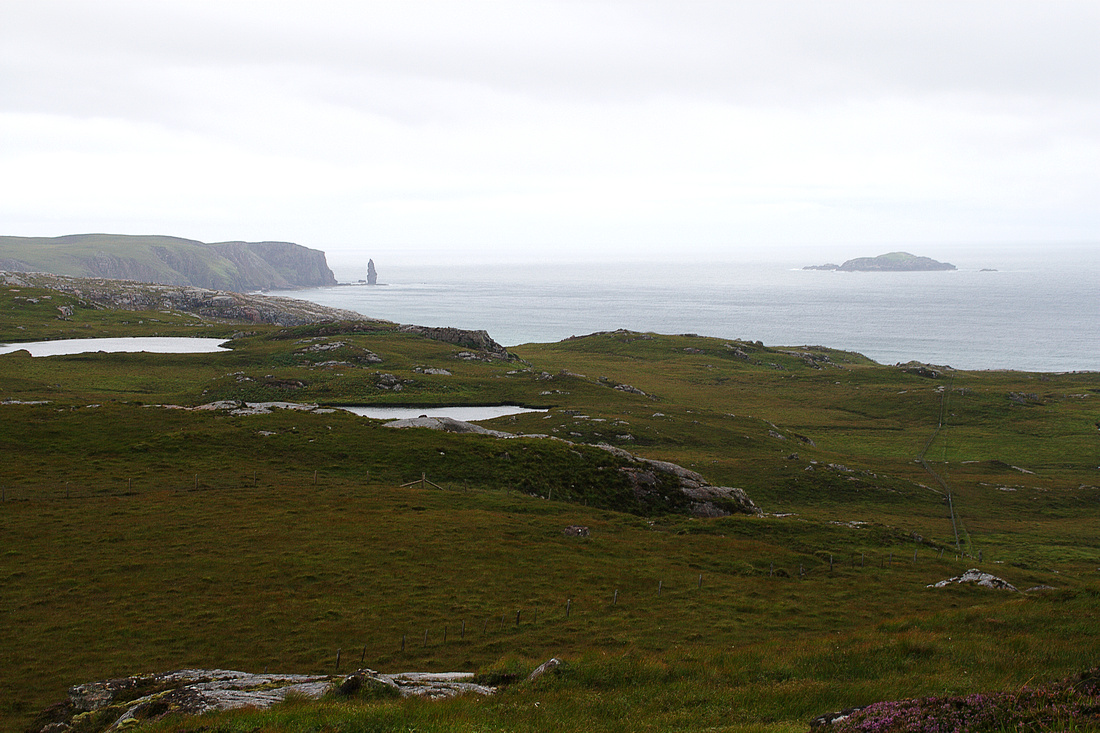 Over the topWe climbed to high ground after leaving the bothy and followed the fence to the coast.

Leaving the waterfall behind, we climbed over rocky terrain at the top of the cliffs heading towards Sandwood bay. 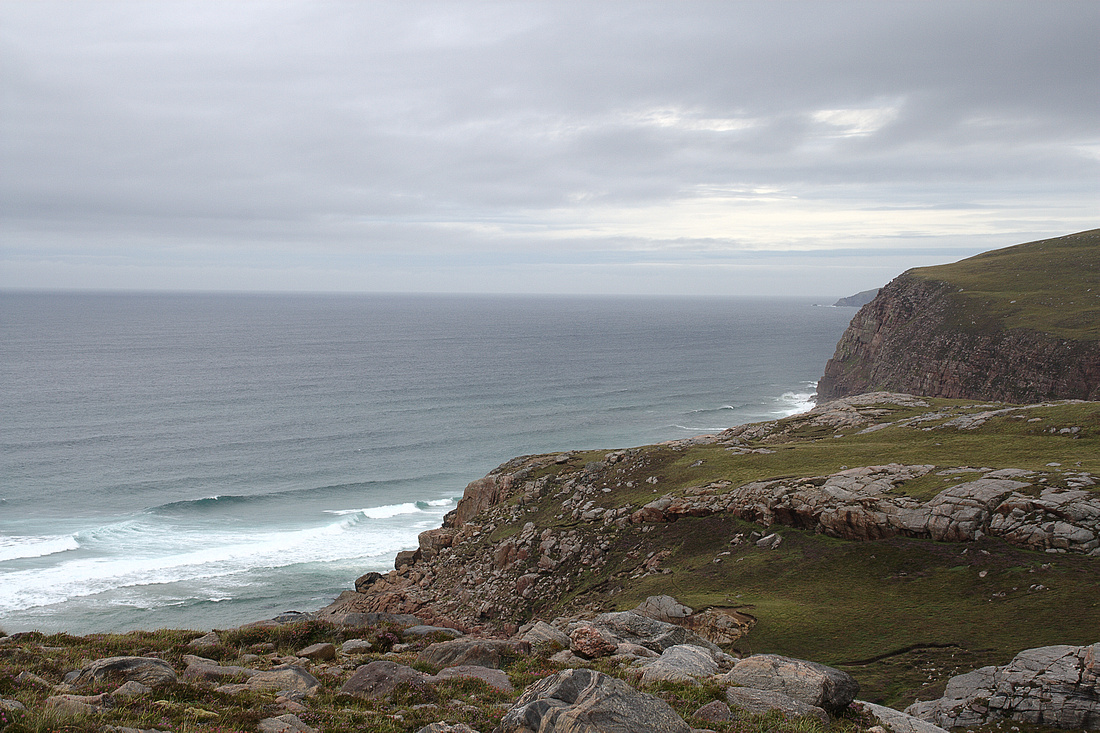 The rocks here are colourful and varied, every rock and cliff face seems to be different with veins of various shades of marble running through them. On outcrops, there are interesting patterns that suggest the rock has been bent and folded. 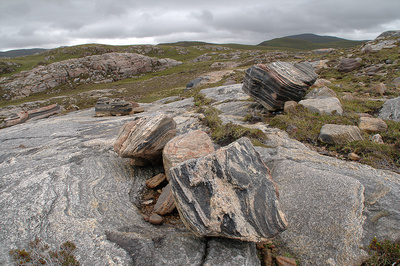 The colourful rocks of Sandwood Bay 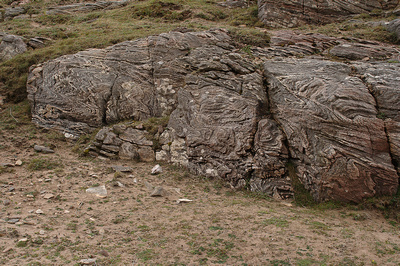 Eventually, we descended down to Sandwood Bay and we immediately noticed that the river from Sandwood Loch that flows across the beach was much higher than it had been the day before, due to the amount of rain that had fallen overnight.

I tackled the crossing with my waterproof socks on and managed to keep in shallow water. Bob and Susan decided to remove their boots and wade across. 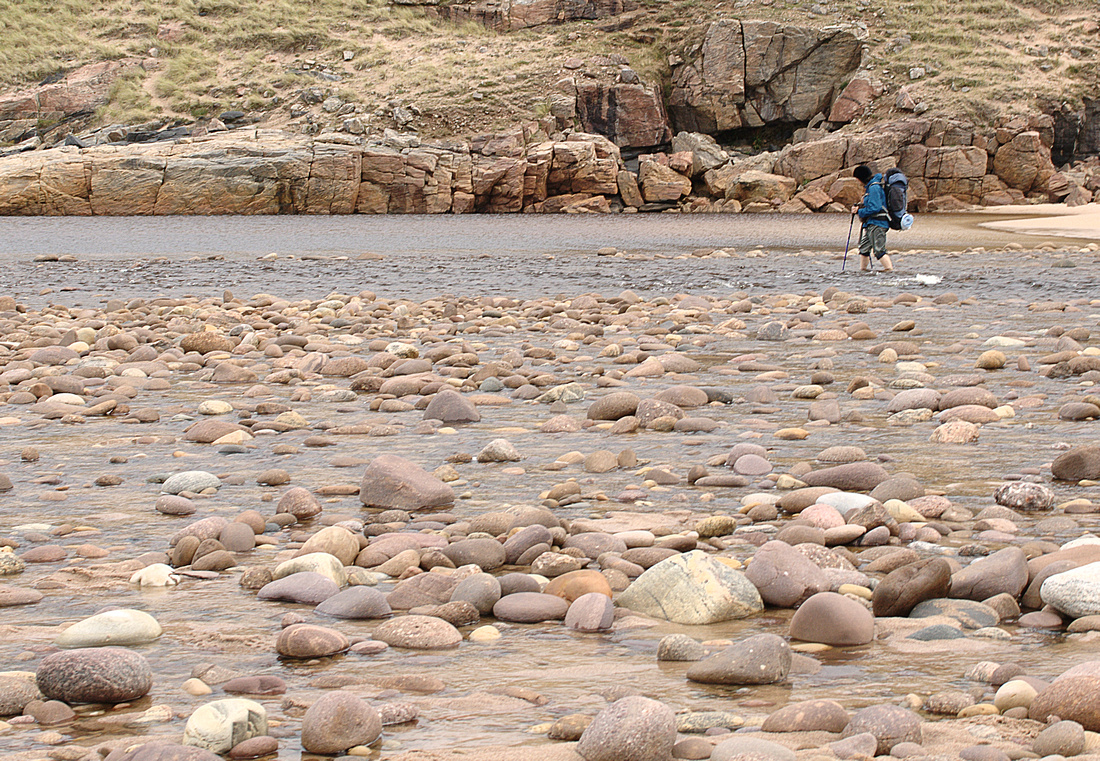 After crossing the river we chose a comfortable spot on the dunes that was sheltered from the wind and again we sat for a while and enjoyed the view. 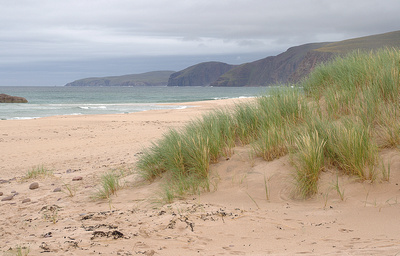 Sandwood BaySitting on the beach 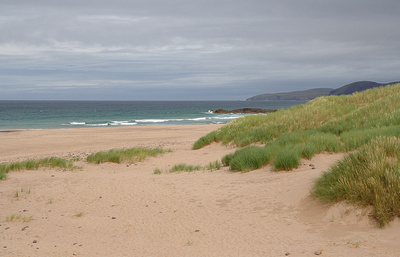 Sandwood BaySitting on the beach

It was then time for the four-mile return journey across the bleak moors with the rain constantly hitting our waterproofs, at times the cloud cleared for a view further afield. 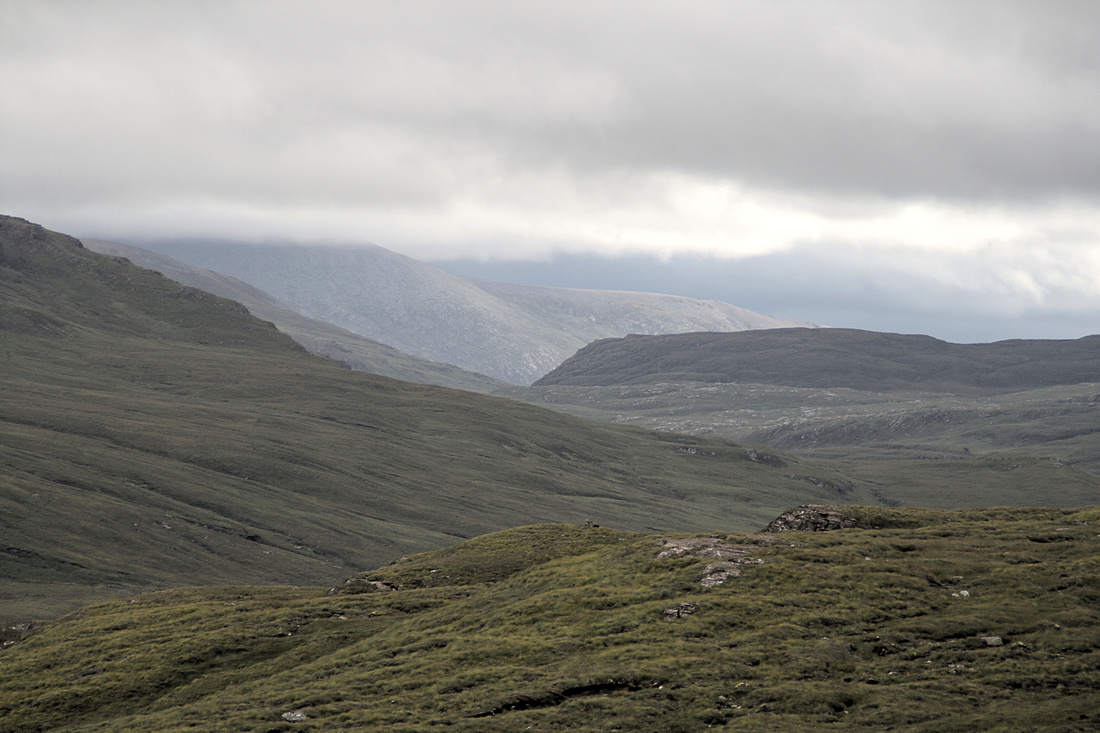 Across The moorsThe return journey from Sandwood Bay

I was lucky to have grown up by the sea with plenty of time spent on golden beaches, I had also spent the most idyllic two week holiday at Luskentyre on the Isle of Harris when I was 16 years old - I had that one memory of beach perfection to last me a lifetime.  Sandwood Bay, therefore, was not something that I was particularly bothered about seeing, truth be told.

On the way back we spoke to a lady who has visited here since the 1980's. She told us that there was no path to the bay back then and you had to walk across the difficult terrain of boggy moorland, once you eventually reached the beach there was nobody there. Nobody that is except of course for Sandy, the hermit, whom she had also met on one of her visits to this lonely place and she told us a story of her encounter. The creep of urbanisation since then, with the improved path, means improved access, meaning more visitors, visitors like me, meaning more articles on the internet for more potential visitors to see, meaning more erosion and more litter, eventually leading to loss of character and another wild place tamed. As a photographer, I see this all the time and I don't know the answer as I also contribute to this with every visit I make and every picture shared on Pinterest.

This beach is still special though, although busier than it used to be, I found it special because of where it is, the bothy with its interesting history, the fantastic rocks and surrounding hills which all come together to feel like you are visiting the edge of the world - it's still on the edge, but it's less wild than when Sandy had it all to himself.

I'm so glad I was invited along - thanks, Bob and Susan.

Chris(non-registered)
Thanks Tim, great to hear from you. If I wasn't so lazy then I'd have got up early and taken pictures..My excuse was the weather though and not the wine ;)
Tim H(non-registered)
A great place to be and explore! Lovely images and a good read Chris.
Chris(non-registered)
It was braw.Fancy a trip there in the winter?
Andy P(non-registered)
I'm 'well jel', that looks brilliant. I'll need to get up there to see that bothy.
No comments posted.
Loading...