When I was in my early twenties my friend was dating a girl called June. He told me that this young lady and her brother were members of a raft racing team that needed new members and asked me if I fancied trying it. Suddenly, all my summer weekends were taken up with travelling about in a Transit van with a team of ten others racing rafts in the rivers and seas off the Scottish coast. We were all over the place, racing underneath the Forth Bridges, Aberdeen, Kelso (a memorable race there), Kenmore, Aberfeldy, Crieff, Dunkeld and many other places - it was all a blur. When we weren't racing we were training around the village of Ceres (where the team was based) and we were going away at weekends mountain biking, training on rivers and climbing hills, with an occasional group trip to a special place on the west coast near Mull.

We were the Cabin Cruisers raft racing team and it was excellent being a member of that team. The team captain was called Josh and he was a born leader, he had a group of young men as organised as a group of young men ever could be. He organised so many trips away, he enriched us greatly. I was fit back then as well - Some days I would cycle seven miles in the morning to work, cycle home seven miles, then after tea, I would cycle 10 miles to Ceres, run for two hours, then cycle home the 10 miles back to my bed. It never got easier, but I think that I got faster.

In those days raft racing was an organised sport and it wasn't those rubber dinghy craft we were racing, or those homemade concoctions with barrels, no, we were racing custom-built craft that the team built to league dimensions and they were serious. The river rafts were rectangular and hollow with fibreglass tape at the edges to keep the water out. We had seats for 10 men to sit on the top and we would all paddle in time with the two men at the back steering the rafts. At the river rapids we had to paddle like mad to go faster than the water so the rafts could be steered... often we were not successful and the rafts would hit rocks and get holed or we would capsize, which was always stressful in fast moving rapids. We had some close calls, but oh how we laughed afterwards. The picture below is of the Cabin Cruisers shooting the rapids, I've borrowed it from a Facebook post of Junes. 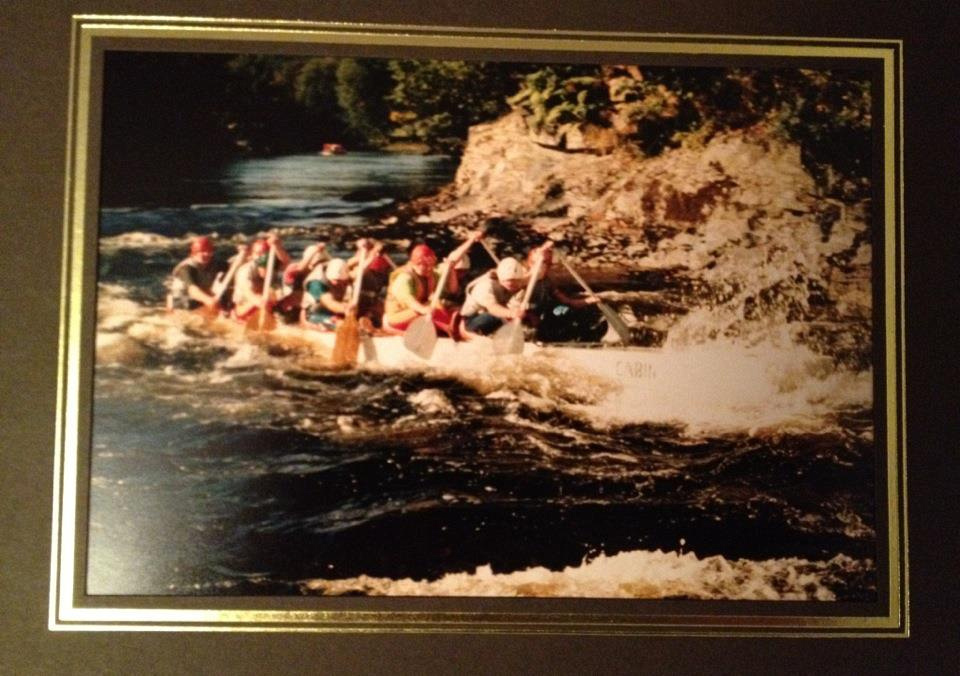 Some of the races were hard fought and you would be exhausted racing against the rival teams. Scot-lad were a team from Forfar and they were the ones I remember as being the hardest to beat. It was always great to beat them and I can remember racing neck and neck against them for ages, we were slowly getting in front and then we hit a rock - that was the end of our chance for that race. Some races like the particular Kelso race I remember were an emotional experience. The start was chaos as a lot of rafts took off together to get in front before the narrow rapids. We got in front and paddled like mad - we were in the lead! We then took a left turn at a fork in the river and had to go round an island. We had taken a wrong turn and we could see several other rafts ahead of us as we cleared the island. We paddled like mad and the River Tweed had plenty of traps for those in front to allow us to catch up, we were on fire that day. We were neck and neck with Scot-lad but I think we managed to pull away just before the finish line - I can't remember actually, as I was so emotional at the time due to the effort that we put into it.

The Kenmore to Aberfeldy raft race was the big one - It was a carnival atmosphere and over a hundred rafts would cram down the River Tay bashing and smashing into each other and the scenery, it was dangerous as a result...but great fun. The first year I raced we got fifth. Some of the other races were long and once I even got sent to hospital by my mother to get all the blisters on my hand treated after playing my part in the 13 mile marathon, which finished at Logierait after the Grandtully rapids that always managed to hole our raft, turn us over and wash us all.

Sea races such as at the Forth Bridges were raced on sea rafts, which were streamlined with a bow and rear taper to cope with the waves. It was great in some sea races cutting through the waves as they crashed over us whilst we paddled like mad. You had to time the turns with the waves or they would capsize you. I remember one race at St.Andrews, as we turned near the pier, two waves came together under the raft and they threw us into the air and disrupted our race quite significantly as we scrambled back on the raft to try and catch up.

Raft racing was a league organised by the raft federation (I think it was called SURF, Scottish Union of Rafting Federation), We even won the league one year and here is a picture of the team after we'd received the prize (I'm on the far right with the tasteful shirt). This picture is also from June.

The Cabin Cruisers Raft Racing TeamThe team with our trophies at the end of year presentation in Perth, a few of us ended up in Kirriemuir and partied all night afterwards. I had work the next morning in Leuchars and I never got there until 2pm, still wearing that shirt ;)

Through all these times, June would accompany the team with her brother. She raced in one of the ladies teams latterly, but she raced also with the Cabin Cruisers and she was one of the original members. Eventually, June and my friend split up, but we all remained around the team and enjoyed the races, the training and the numerous outings. I then got a job in Peterhead and moved away to confine myself to many years of sitting on the couch. I lost touch with everybody, stupidly, and hadn't really given a thought to the great times that I had. The league eventually broke up and serious (wooden) raft racing in Scotland is alas no more.

With the advent of Facebook, I did eventually make contact again with a few of my old friends and it was recently where June arranged with Karen (my wife) and me for a walk up the Ochil Hills. Karen pulled out at the last minute, due to a knee problem, so just June and I headed up Wood Hill, Ben Cleuch and Andrew Gannell Hill on a sunny Saturday for a circular walk. It had been twenty-three years (since my wedding) when we had last seen each other and it was great to catch up and reminisce about the old glory days when raft racing was our common hobby. It was also a lovely day as an introduction to June of walking in the Ochil Hills. 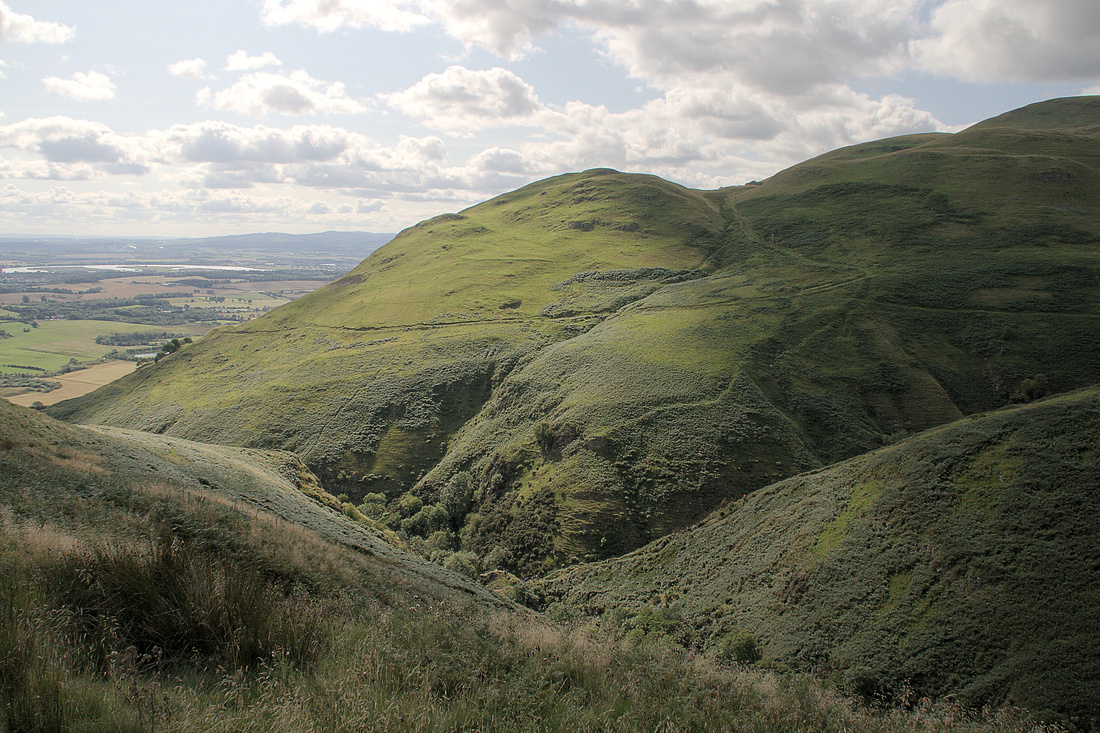 if it hadn't been for June dating my friend, then I would have never have experienced raft racing and the camaraderie (and slaggings) of the team. My life would have been much poorer if it wasn't for them. As I got in my car to drive off from our walk together, June had thanked me for taking her up the hills, but then I realised after I'd driven off that thanks to her, the pleasure had all been mine.

When I raced rafts, there were things in my life that bothered me. I went out rafting anyway as the team expected it and now, those things that bothered me are forgotten - the rafting though has stood out as a beacon in my past, as we were doing extraordinary things, which we didn't give a second thought to at the time. I think of the things that bother me now and it has occurred to me that the typical niggles that I allow to annoy me aren't that important... Just getting out there and doing something I enjoy in my free time is, as that is what I'll remember when "getting out there" is no longer possible; that time is fast approaching. As one of my other friends often tells me, "you're a long time deid". 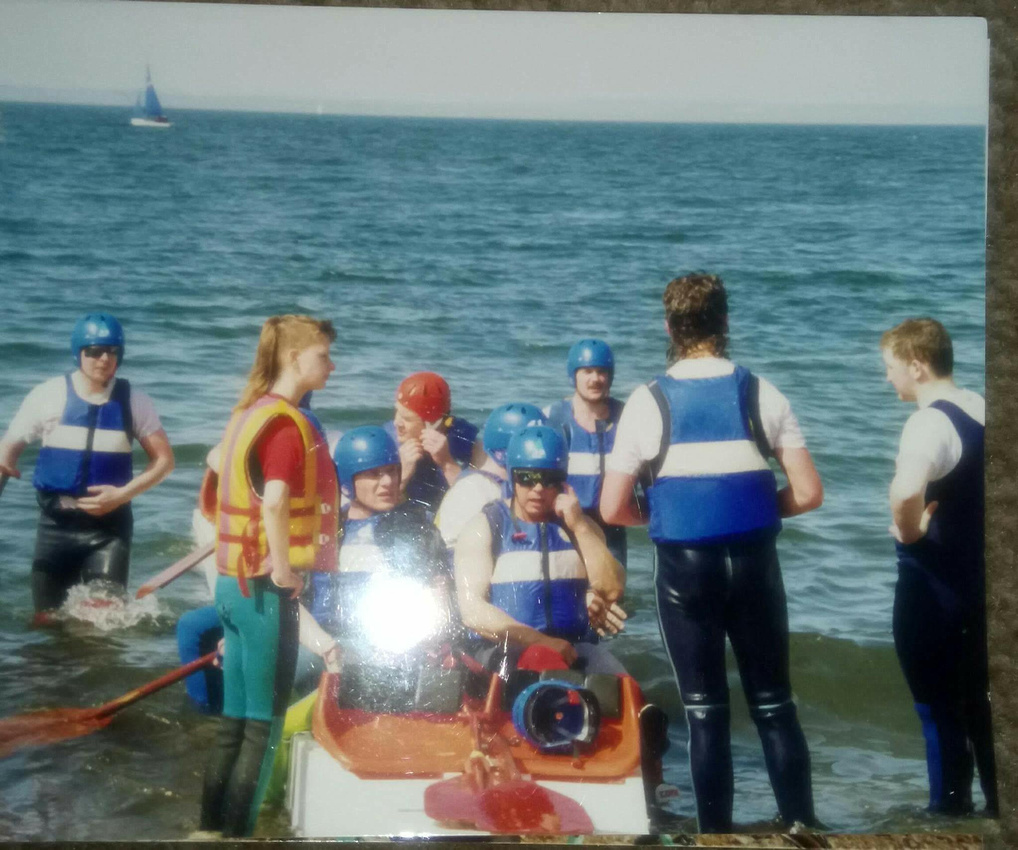 The end of a sea raft raceWe all get our breath back as Josh reflects on the result. June is on the left.

Chris Bowness Landscape
Thanks for the comment and sharing your memories of Kenmore. I was glad to have been there too.
Madge(non-registered)
My friend had an old caravan at Kenmore and we loved to watch the raft races. Early 80's. Health and safety rules have taken a lot of fun out of life.
Chris(non-registered)
Thanks for the comments Craig and Walter. I remember Red Dragon! It was such fun and I appreciate you agreeing with me about what a fantastic time it was. Just a pity it's not still going. No one but us will have that memory.
Walter Tetsill(non-registered)
It was a brilliant time in everyone's life travelling every weekend from April to September everyone working hard all season then winter months find raising discos going to other teams nights out and making friends up and down the country
Craig Scott(non-registered)
Best time of my life going round Scotland with my team red dragon we were far from the best but it didn’t matter it was all about the fun
No comments posted.
Loading...