A visit to Cadderlie Bothy

Having visited the same bothies over and over, it was time to visit a new one. My 18-year-old son, Craig, decided he would come along with Andy and me - this was hopefully going to be fun!

After some research I eventually decided that Cadderlie Bothy would be worth a visit, Andy agreed and Craig was none the wiser. It was on the banks of beautiful Loch Etive and it was an easy walk from where you could park the car. A 1.5-hour walk without big hills would be a good way to introduce the boy to my pastime as he isn't a walker, even a pavement is a chore when he can't afford a taxi. When he was younger I used to take him walking and he hated every minute of it. I soon learned not to take him as he would moan constantly. This time, now that he was 18, the prospect of having a wee drink in front of the fire in some mystical place that I always talked about had piqued his interest so I was determined to find a fairly easy bothy that would give him the experience of having escaped civilisation for a night. Cadderlie, I hoped would have this.

We parked at the quarry gates at Bonawe and there was a car parked there already - I reckoned that we would not be alone. We set off in poor visibility as it was very damp and very mild for January and the abundance of moisture in the air meant that visibility was poor so we could not see the view around us as we walked past the quarry. We continued onwards into old native woodland and my son soldiered on with his heavy backpack, despite only having come home at 06:30 from a heavy night out. His first disappointment had been losing his mobile signal after the quarry so he couldn't keep his girlfriend up to date on his progress. He then kept asking how far we had to go and eventually he got the answer when we spied the bothy through the trees on the other side of a very swollen and very fast running river. Luckily there was a bridge. Cadderlie BothyCadderlie on a wet and windy but mild January morning.

I ventured first into the bothy and walked into the right-hand room where two young men sat. They were happy for us to join them and I was glad that there were folk of a similar age to Craig. The left-hand room had a party of five who were friendly enough but settled in so we made ourselves at home in the right-hand room, which was the main room with a big fire. Cadderlie has a third small room fitted out with a sleeping platform and we laid out our stuff as the other occupants weren’t going to use it.

It was a good night, Andy was on dinner duty producing a satisfying pasta and after that, we had some drinks. Two cyclists appeared at 10 pm and added to the conversation and the bothy now had eleven people in it. This was Craig's first experience of an impromptu bothy social event and he was having a good laugh around the fire. The room was warm from the glowing fire and so was our bellies with the booze that we had bought - Another great bothy night. 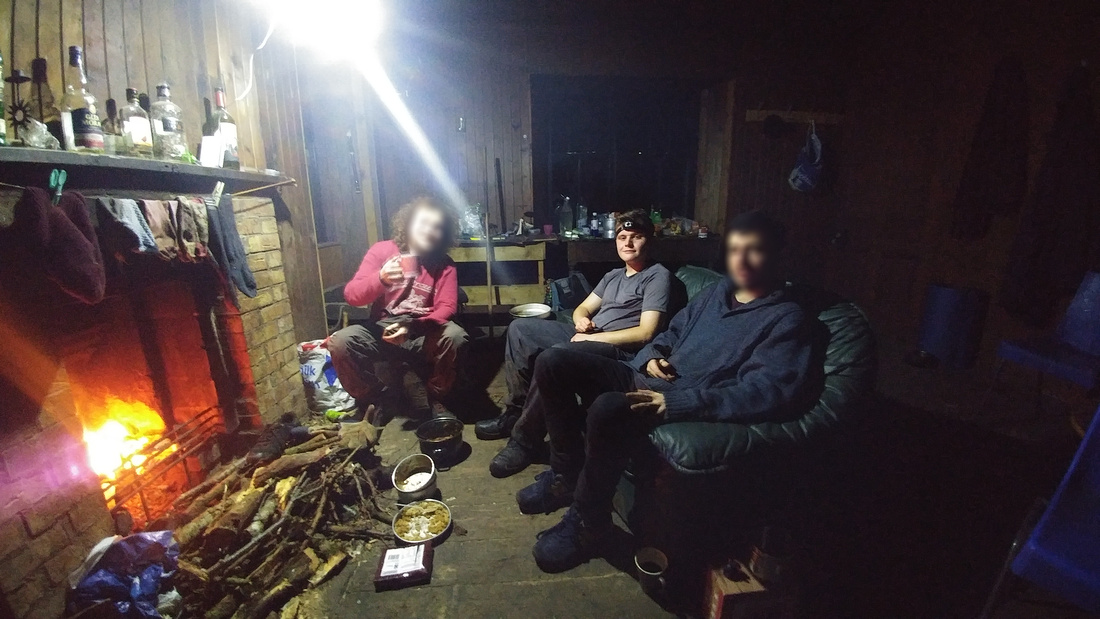 Craig by the fire at Cadderlie BothyCraig sitting at the fire enjoying a drink with the other bothy occupants (I've blurred their faces intentionally).

I went to my bed about 01:30 and Craig was having such a great time that he stayed up past 02:30 with his newfound acquaintances.

In the morning it was time to cook breakfast and say goodbye to our companions. I took a walkabout around the bothy for some pictures of the surrounding ruins and landscape. It was mild and windy with intermittent showers, but it was beautiful here whatever the weather. 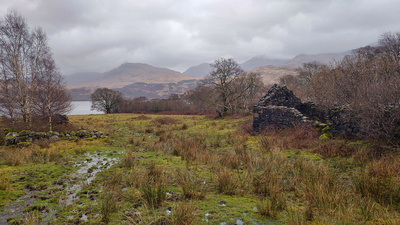 CadderlieTaken from outside Cadderlie Bothy on the banks of Loch Etive 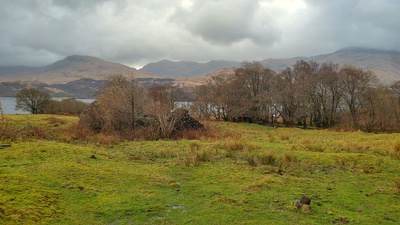 Once we had tidied up, it was time to head home. Craig commented a few times as we walked out about nice the scenery was, I’ve never heard this from him before as he was always just bored on our historic outings. At some of the small hills, he shot off up them which showed his age compared to us couple of oldies trailing behind him at our steady pace.

We reached the car and drove home. Once back, Craig couldn’t wait to tell whoever would listen about his bothy visit. He told me he wanted to go again and he also wanted to try camping and tarping. He’s only starting out, but getting out there and learning new skills, meeting interesting folk in bothies and just generally venturing out into nature is a great way to learn self-reliance and confidence.

Craig later told me that he had ventured outside around 2 am on his own with his headtorch, he hadn't ventured far as he didn’t want to get lost, but he loved just being out there, in the dark and in the wild. “It was like being in an Xbox adventure”, he told me, but I know it was better than that as it was the real thing. The real thing with all the lessons that come with reality, like getting lost in the rain and in the dark - He had thankfully passed the first level.

Andy P(non-registered)
Tim, it wasn't just a digital detox, the poor boy was hanging out his hoop on the saturday morning and I salute him for it. I'm one of the last men on the planet to slate him for tying one on before a foray into the 'whatever'. He sucked it up and did what he needed to do, hope to see him out again if he can be arsed listening to us old dafties.
Chris(non-registered)
Thanks Tim :) There is a sign above a door at a bothy somewhere that states "enter as strangers leave as friends". It's so true, I've been in a bothy and discussed life stories with some very interesting people. It's a unique experience. Craig luckily got that. Glad you liked the pictures, conditions were certainly not on my side, but a beautiful place is hard to hide. He needs those boots too as a lack of decent boots will be a danger in more far flung places. Luckily he works so my hand can stay in it's pocket ;)
Tim(non-registered)
Craig's dreaded digital detox turns out to be a new found love of being out there self-sufficient, at one with nature? Let's hope so, glad his first outing was one he will have fond memories of ;)

It sounds like you all had a good time, loving the simplicity and solitude of the bothy, great shots as always Chris, respect my friend.

I agree with Andy, I can hear a pair of good boots calling Craigs name, not to mention a camera maybe ;)
Chris(non-registered)
No he'll not buy a pair till he gets paid. He's also changed shifts to work on Sundays! He will still come with us but left often. Luckily he has pals who go away a lot too and he wants to go with them too now.
Andy P(non-registered)
Glad Craig liked it, have you told him that not ALL bothies have sofas ????

Has he bought a pair of boots yet ????
No comments posted.
Loading...