Bob, Andy and I had set off one fine Friday morning in August for the 4-hour drive to park just north of Kinlochewe. The outward trip always goes quickly and by 1 pm, we'd parked up in the carpark to walk the nine or so kilometres to reach Lochan Fada, which was to be our camping spot for the night.

Bob had passed this way before when walking the Cape Wrath trail and had spotted some good ground at the banks of this large lochan. Andy, in particular, found the walk-in tough, he was suffering from knee and hip pains and as his regular walking buddy I could see that he wasn't right, as his head was down and his posture was awkward, where usually he walks with his head up and shoulders back, like a boss...

He suffered all the way to our camping spot, beside a small feeder stream. Once the tents were pitched, Andy decided he would hand in his sick note for the next day. Bob and I decided then to climb the three southerly Munros on that route and leave the other two Munros to the west for another day. 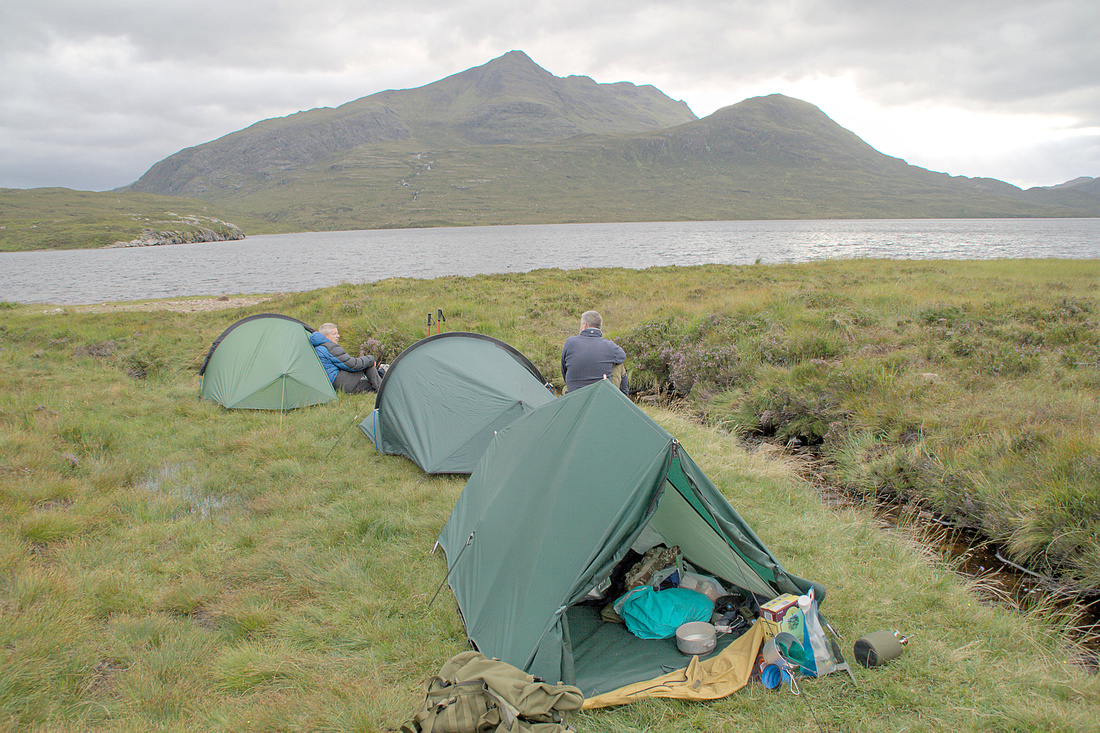 In the morning, after a midge infused porridge, Bob and I set off Northward following a subtle path to climb the first Munro of the day, Mullach Coire Mhic Fearchair (from hereon in this story called double trouble), a grand named Munro topping out at 1019 metres.

It was an eventful path to reach this Munro along the base of the smaller Mheall Garbh, where the path clings to the steep side of this rocky hill. The ascent of double trouble was no less eventful and I enjoyed it with steep slopes and mini-scrambles that took you to the top quickly due to it being entertaining. At the rocky top, we clambered over boulders to reach the summit and we took in the vista of the surrounding landscape, which in the dull grey light of this day looked like Mordor.

As we stood at the top, we looked down Gleann Na Muice and could see the banks of Loch Na Sealga in the distance and 900 metres below and we couldn't see anything man-made anywhere for the whole 360-degree panorama - This truly was wild country.

It was then time to descend off Double trouble down its steep rock-strewn north slope so that we could climb our second peak of the day, Sgurr Ban. At the top of this Munro, we looked towards our third peak of the day, Beinn Tarsuinn, which was to the South, where we'd just came from! 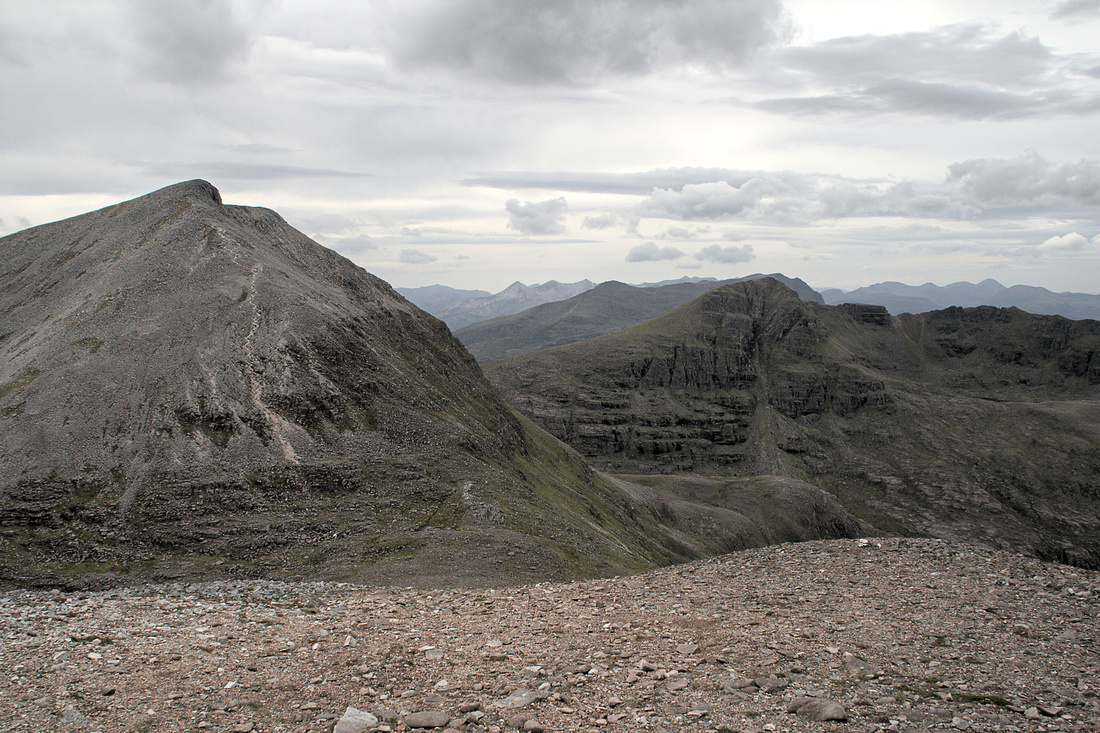 Bob didn't fancy going back over the last peak (hence why I call it double trouble), but when I saw the route Bob was going use, to try to skirt around the Munro, I decided I just wanted to climb back over the top! Bob's head for heights and adventure outclasses mine!

So Bob set off following a vague deer track to the west of double trouble, to hopefully contour round it, whilst I ate a flapjack to summon up the energy to climb the same Munro top that I'd just came from. 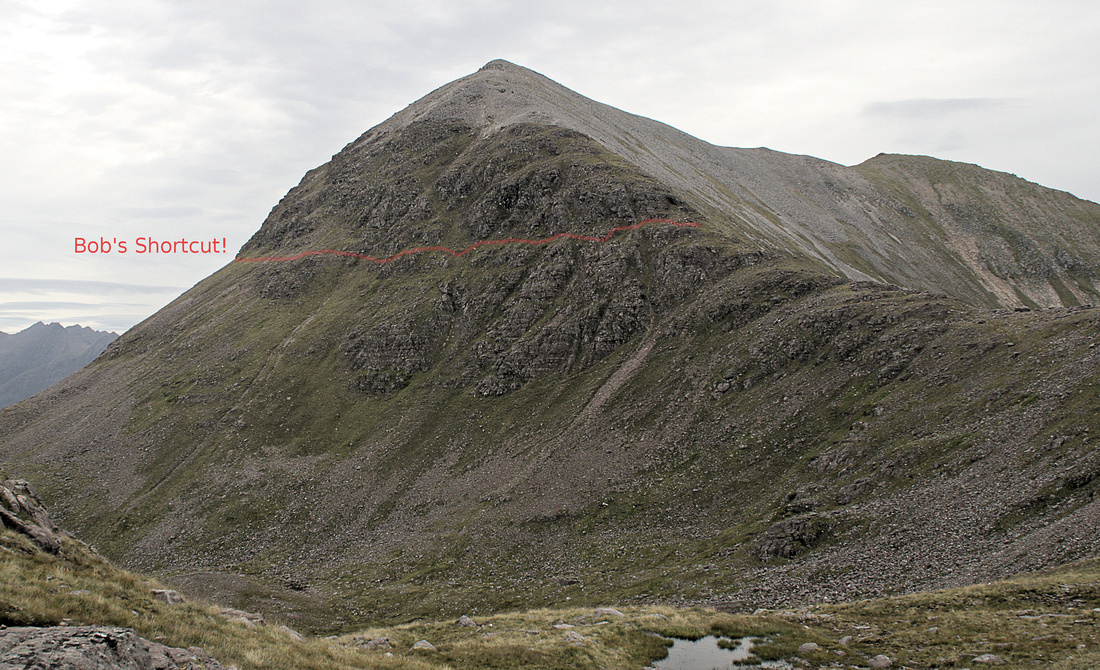 It's a steep old climb but the path zigzags on loose stony ground and you gain height rapidly. As I left the summit to descend, I could just make out Bob sheltering behind a rock 300 metres below me. Eventually, I reached him and I must have delayed him a good half-hour. Bob told me that the detour probably took a half-hour, but it only seemed like 10 minutes due to the adrenalin rush of the steep slopes. I shuddered at the thought of the steep plunging sides and was glad that I'd taken the 'hard' route...

It was then time to retrace our steps on the slopes of Mheall Garbh to start the climb of Beinn Tarsuinn. Then we started our final ascent. I got the chance to grab a snap of where we'd came from before we climbed this peak and before we knew it we'd reached the top and could survey the well known flat spot on the ridge that resembles a tennis court. I've seen this in books before and was glad to finally see it for myself. I was however tired and the wind was getting up, so I'd lost interest in descending and clambering the short ridge walk to explore it. 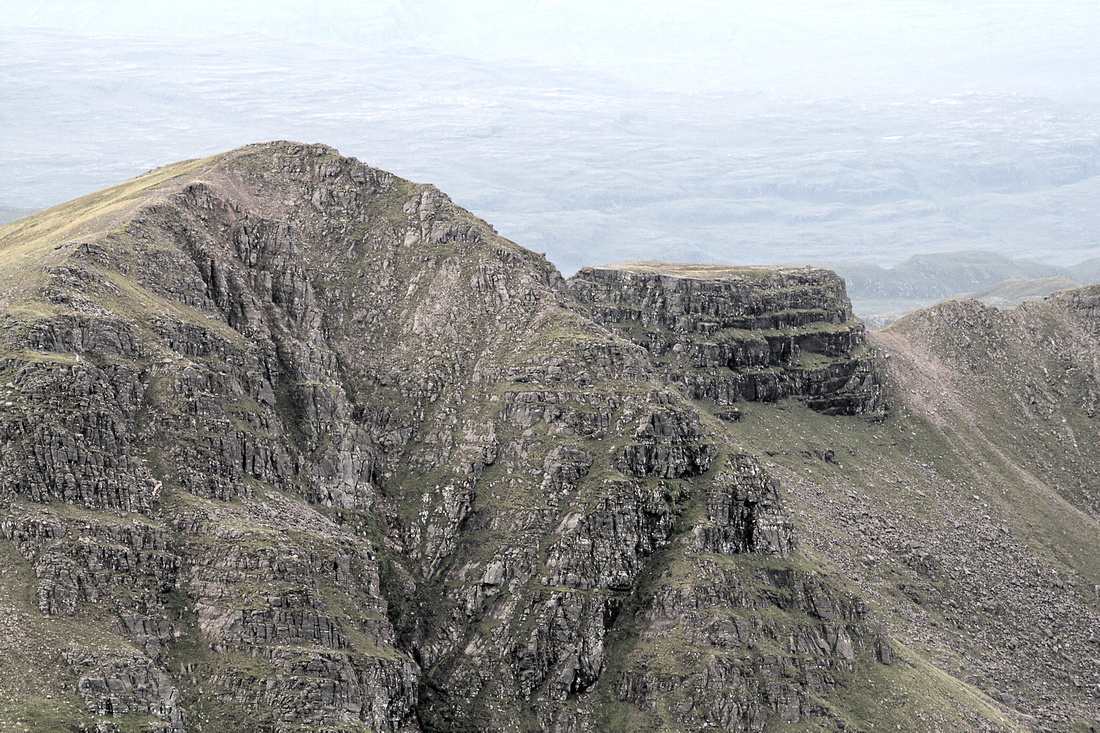 Beinn Tarsuinn and its 'billiard table' 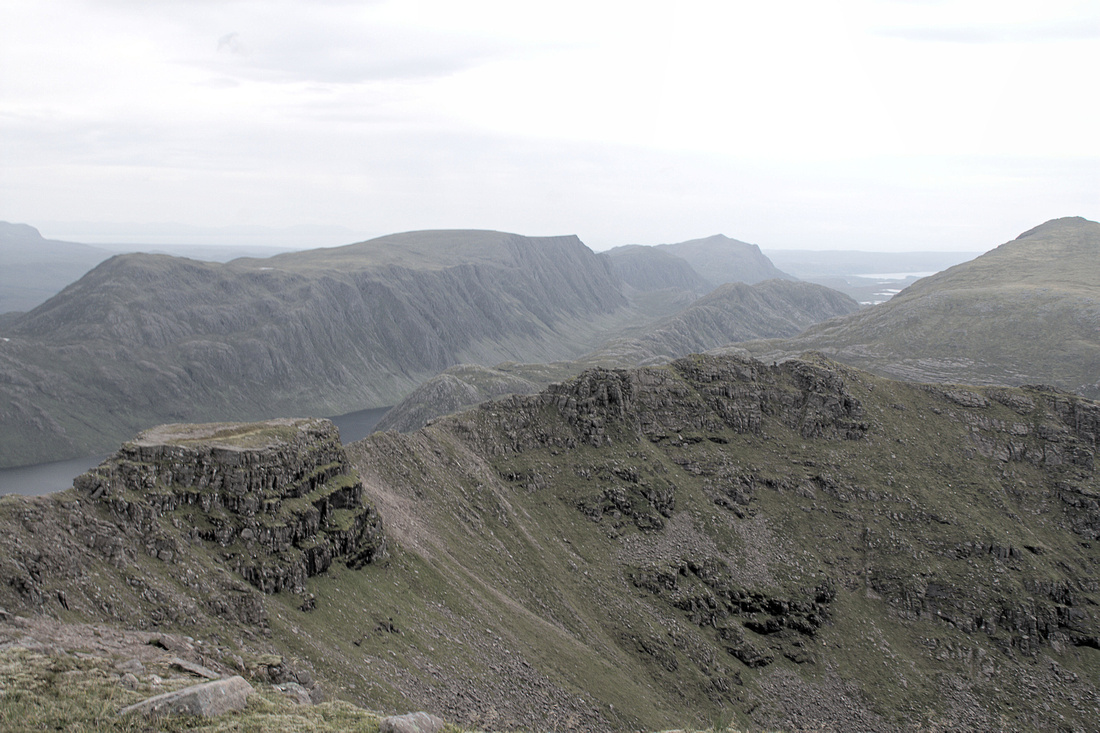 I need to scale this top again and walk that ridge on my way to the other two Munros that make the "six" as the ridge looks entertaining, we could then find our way back along Lochan Fada.

It was then time to head back to our tents and by this time, I was glad we weren't doing the full circle and that we didn't have to carry all our camping equipment as it would have been a hard second day to complete the circle - we would have done it, but we may have stopped enjoying it at some point...

Eventually, we reached our tents at about 5 pm and as we were approaching, we could spy Andy in the distance standing by them. When I got in my tent, I nursed my blisters that had surprisingly appeared on my toes due to hard terrain and my gators preventing my Goretex boots from breathing properly and causing my skin to go soft. I then went to sleep and never bothered making a hot dinner due to those infernal midges spoiling the fun.

In the morning it was quite a contrast. It was a beautiful, still sunny morning with only the midges to ruin things. The mountain Slioch was perfectly reflected in Lochan Fada and it made me think of a medieval warrior wearing a helmet! 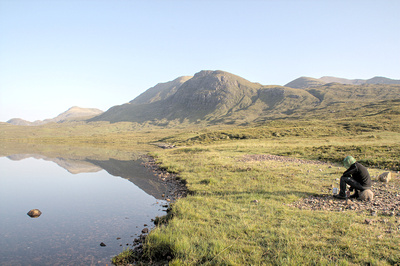 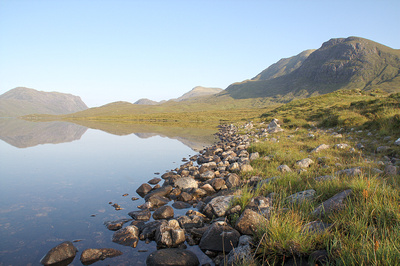 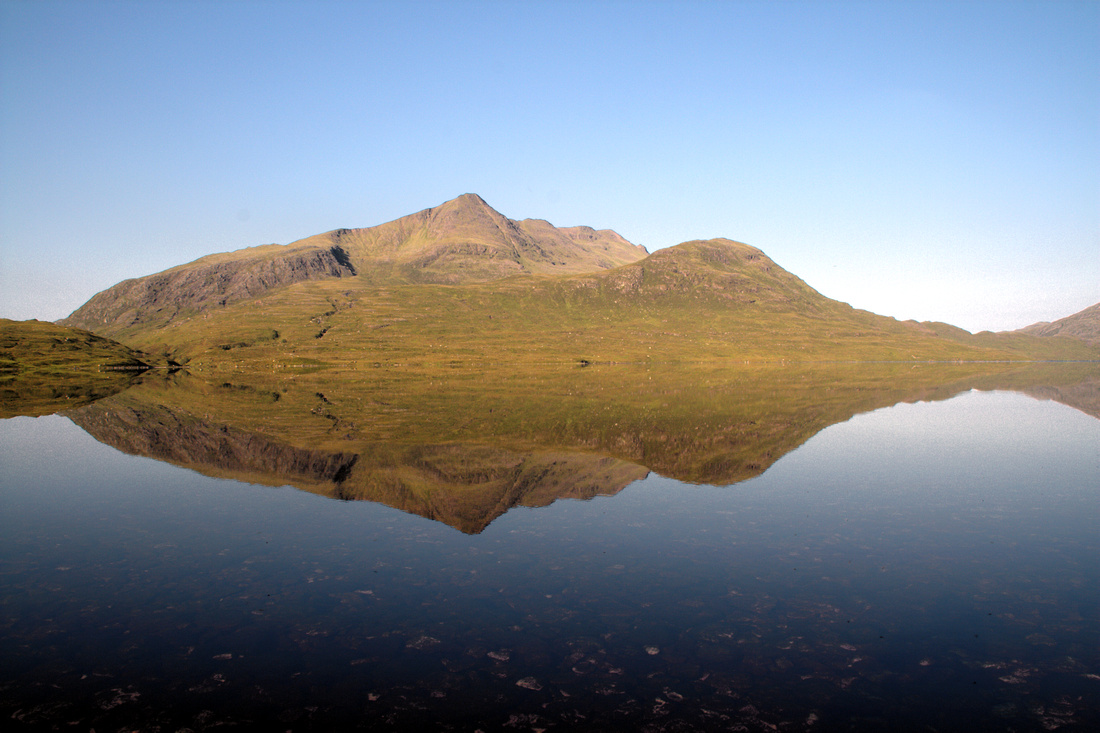 We then walked back to Kinlochewe, feeling all the richer for our adventures.

I've made this video below of our trip and I think that it illustrates well the tough terrain and morose landscape that we encountered in the low dull light.

Chris(non-registered)
Thanks Tim, Glad you enjoyed it and I'm very sorry to hear about the illness.

I'm also out of things just now for different reasons but hope to be back doing what I enjoy doing shortly, as things settle down into the new year.

Tim(non-registered)
I really enjoyed reading and seeing all over my first coffee of the day Chris, nice work!

I'll be here more often again now, we have had a family illness leaving me little time to catch up.

Chris(non-registered)
:) We all have these days when it just doesn't happen. If it's the same everytime, then we know we have a problem :)
Andy P(non-registered)
Even managed to forge my mum's signature on my sick chit. ;-)

Not sure what was wrong with me mate, too old to be a 'snowflake' so must be just old, fat and unfit.