I'd been working in the far north of Scotland and on the way home for the weekend I fancied a wild camp to see if I could bag any photos. It was pointless whizzing past all the great scenery!

I had fancied returning to Glen Feshie after a 20-year absence but eventually settled on Loch an Eilein near Aviemore as my time of arrival may only give me a couple of hours to find a suitable spot before dark.

I indeed arrived with only a couple of hours to spare before nightfall, so after parking up, I walked down the west side to the south of the loch to find a good spot to pitch my tarp. I took a picture of the ancient castle that is on an island in the loch on the way. 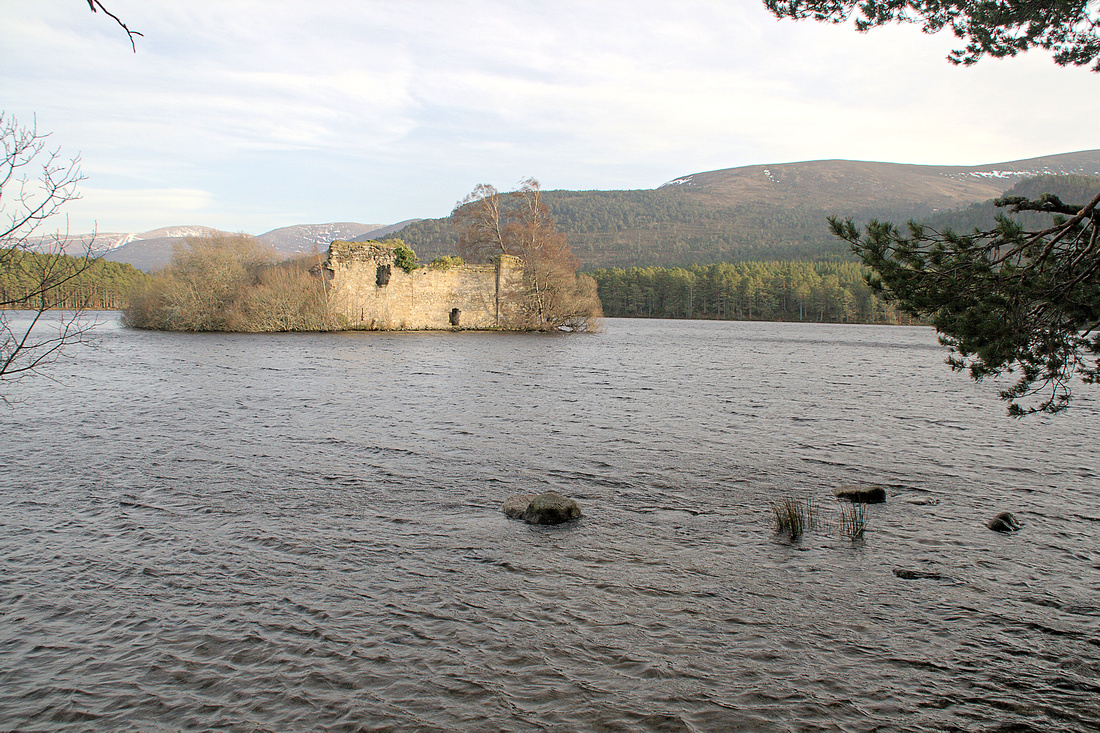 I had originally planned just to bivvy, but the latest forecast I’d checked whilst lunching on my way down had predicted rain at midnight, so I elected for the belts and braces of a tarp and bivvy bag. On the south shore of the loch, I left the main track and followed a small track through the knee-deep heather. In this terrain relying on a tent can be a nervy experience in fading light as opportunities to pitch can be limited - A bivvy bag, however, is a more flexible companion.

I did find a camping spot that a tent could be pitched, there was a stream here for water too, but as I arrived so did a family who had also been following the path and that put me off camping here... It was also further from the loch that I hoped too. After faffing about further afield and finding nothing, I returned to near this spot and decided to set camp on a tiny clearing on a hillock overlooking the loch, about 50 metres from the path.

After picking up and moving a lot of fallen twigs and sticks, I managed to shoehorn my tarp in between trees to provide a shelter from the strong wind and the predicted rain, but only had room to squeeze in 1.5 metres of the 3 metre tarp at an angle between the trees, so I rolled up the other half of the tarp and tucked it underneath. I then pegged out my ground sheet and filled my bivvy bag with my airbed and sleeping bag. It was very mild for February at 10°C so I was wearing overly warm clothing, having been forced to pack a week earlier during much colder weather due to my work trip away. 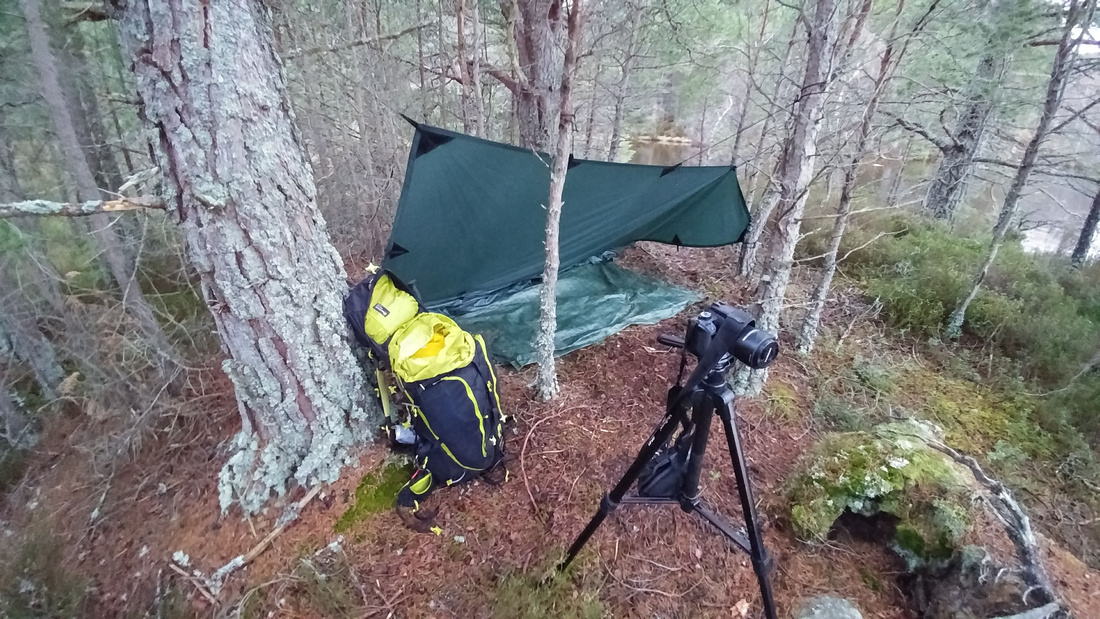 My home for the nightSetting up camp beside the loch

By nightfall, I was settled down. I’d had a good lunch on the way down so didn’t bother cooking anything. I’d bought four-pint cans of strong lager as a nightcap to get me in the mood for an early slumber through a long night. I finally bedded down about 8 pm and as I tried to nod off I could see the moon through the branches above, the branches were swaying in the strong wind and the motion and gentle moonlit flickering soon sent me off to sleep.

Beneath the moonlightAs I sat under my tarp I watched the moon framed through the tree branches swaying in the breeze.

About 11 pm the patter of rain started tapping on the tarp and I was glad that I’d put it up so that I didn’t need to rearrange my bivvy which was wide open due to my overly warm setup. The lager was now wanting back out which is always the problem with this nightcap. I find that lightweight whisky is the solution for a long winters night sleep inducement as that seems to dehydrate me and never needs out during the long cold winters night, but I do enjoy a lager on my wee vacations, despite the slumber interrupting penalty…

By 1 am, the rain woke me again as it was now hammering down, I could hear and feel some drips hitting my bivvy bag, but it was doing its thing and keeping me dry so that I could try and continue sleeping. I was still awake at 2 am, however. The rain had stopped by this time, but the water droplets still hit the tarp whenever a passing gust of wind blew the trees and shook down the moisture from above.

The wind was also subsiding and as I lay with my eyes open I could see the shadows of the branches above dancing in the faint light of the moon that had again come out, but couldn’t be seen behind my tarp. The dancing shadows of the moon are so subtle, but when you have nothing else to look at it is mesmerising. I could also see stars now that the cloud had cleared. Not that many stars could be seen due to the brightness of the moon, but enough to fix my eyes on. As I lay awake watching them, the stars would suddenly be obscured by a swaying of a branch as the earth turned and the tree branches would then get in the way of these points of light shining from history through the void.

I fell back asleep and was awaken by my phone alarm clock that I’d set for 06:30. This was very early as the sunrise was not due for well over an hour, but I wanted to see the morning in its entirety despite the forecast predicting a cloud covering for the whole night. The subtle light show from the moon and stars overnight had proven that wrong, so maybe I had some hope?

As I awoke there was a faint light on the eastern horizon lighting up the cloud. A part of me said, “forget it, put your stove on and have a coffee, you have plenty of time”. Another part of my growing experience realised that when taking pictures of landscapes, never take any opportunity for granted, never mind how low lit! I set up my camera and had to set it to a higher ISO and to the widest aperture so that I could take a 30-second exposure on my tripod. I took several, adjusting things to try and optimise the shot, this one was a 25-second exposure - the light was really low. 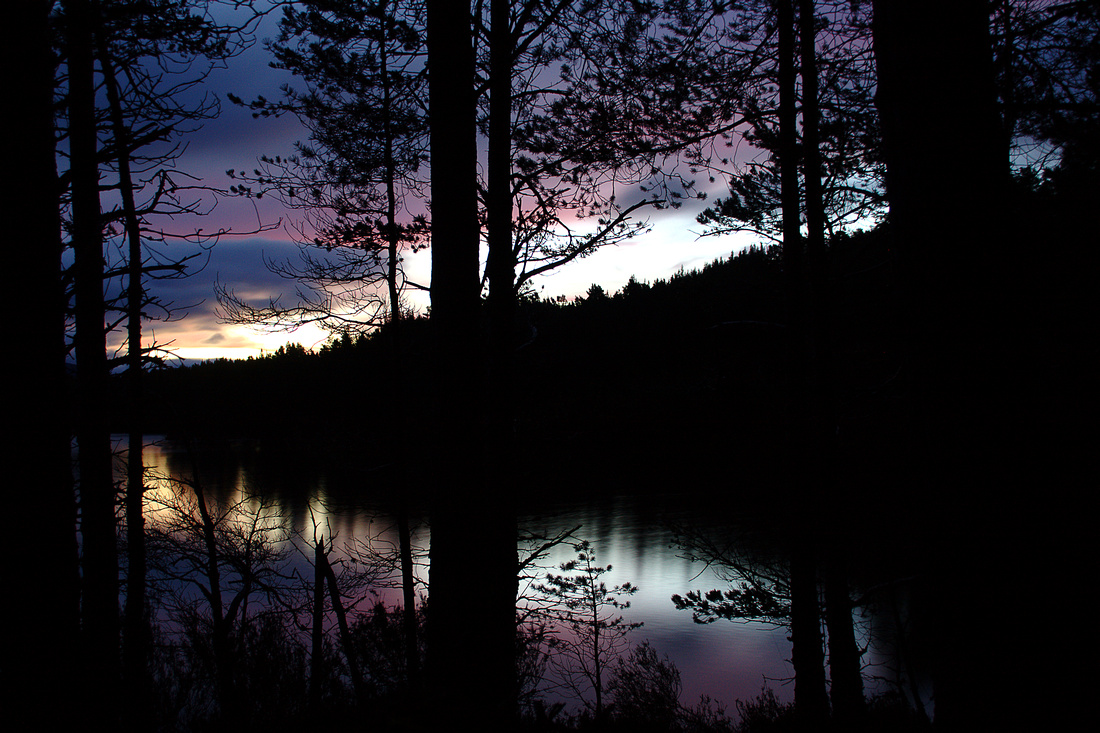 The crack of DawnFirst light on Loch an Eilein. After this picture was taken the cloud drifted east and smothered the sunrise.

The above picture was taken with me kneeling in my shelter, I was still warm inside my bivvy bag so the spot was excellent as the picture was literally taken from my bed! The exposures had slowly become shorter, but then I noticed that the shots were taking longer again. The cloud was moving east and it was smothering the light from the forthcoming sunrise. I’m glad that I’d grabbed that small window of a photo opportunity, which I’ve missed many times previously due to inexperience. Nature offers surprises all the time, it is never what you expect, I try to be alert and open-minded, but even then I usually miss the opportunities presented. I was pleased though that I’d followed through this time and now was the time to have a celebratory coffee in the slowly increasing silvery grey light. My stove burner was fired up with full-on gas blasting out and I boiled my water quickly in my new pot (that finally had a lid).

I sat for a while with my hot coffee and enjoyed the gentle ripples on the loch.

Ripples on Loch an EileinSitting early morning with a coffee enjoying watching the ripples on the loch after the clouds moved in and halted the sunrise light show.

By 8 am I’d packed up leaving a dry patch where my shelter had been and a few squashed unseasonable green shoots that made me feel guilty, I hope that they recover and I realised that wild camping here would quickly be a big problem to the beauty of this place if a lot of people did it. In future, I will seek out and stick to the well-used or barren spots to preserve the surroundings. 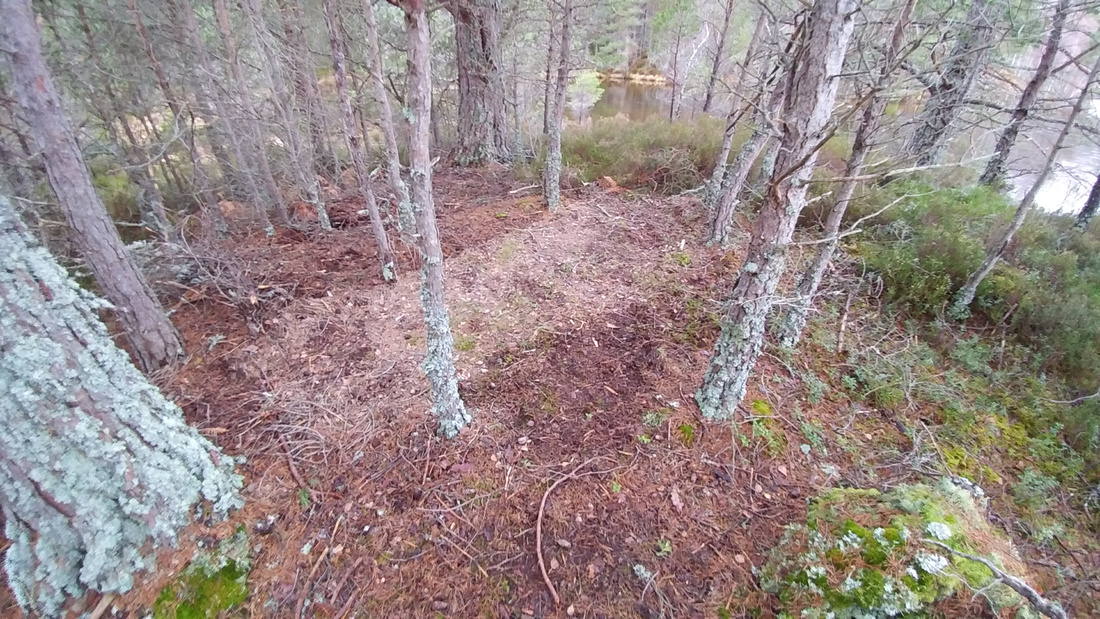 Where I shelteredI try to leave no trace of my camp, but the dry patch and a few squashed shoots is evidence of where I stayed - I'm increasingly aware of my impact and trying my best to reduce it by sticking to paths etc.

I wandered around from the south to the east banks of the loch to complete the circuit, taking pictures as I went. By 10 am I was in my car ready to complete the 3-hour drive home. I had passed a sign pointing to the Larig Ghru on my way around the loch and I knew then that I would be trying my best to visit here again to explore the forests with its 300-year-old trees and the beautiful Cairngorm mountains higher up... Loch an EileinFrom the northwest shore looking to the south shore where I had stayed the night.

Tim H(non-registered)
All good stuff, cheers mate :)
Chris Bowness Landscape
That's great, but I don't mind taking my turn I was just lazy having had a large lunch and knowing that it was only a couple of hours to the car. If we head away for a couple of days I'll try and bring some conconction for a night and a brekky as well :)
Andy P(non-registered)
Ooft, dicing with death if you're not getting your flapjacks mate. I've got some new pots that need to get dirty so wherever we end up next trip I'm happy to cook.
Chris Bowness Landscape
Thanks Andy,

It was beautiful and I'm glad I visited. It's basically a 15-minute drive from the A9 so it is a handy stop off if ever I'm coming down from up north again. It will be a good place to stop to go up the Larig Ghru, they do charge £1.50 for parking here though but the guy at the car park took my details so they would look out for me in case I didn't return - handy when out on your own.

I didn't eat tea or breakfast as I decided I didn't want to get my new pots dirty! I basically went without food for a day as I didn't eat until I got home. The walking wasn't strenuous enough for me to need my magic 29p Home Bargains flapjack - I had sufficient padding to see me through :)
Chris Bowness Landscape
Thanks Tim, I'm glad that you liked the blog and the dawn image :)

A Goretex style bivvy bag is what I've got too and it's very handy!

I keep my camera in a Crumpler quick escape top loader bag. The camera and lens just fit with space for spare batteries and cards and I use it as a shoulder bag so I can quickly grab the camera, but you can wear it like a belt as well. It has a hidden pocket with a rain cover which is very useful in these parts! I keep the camera in its bag overnight beside where I'm sleeping so it's out the rain, the tripod just hung about outside.

I'm actually in the process of making a two-minute video of this trip with accompanying music, it will take me a while. I've also got a video to do of my last wild camp with Andy when we made a massive stew over the fire in his dutch oven! At least this keeps me busy and out of mischief and something to look back on and enjoy.