As I’d previously posted, I had solo camped beside Loch an Eileen a couple of weeks before and had decided to return with Andy to explore further.

We parked at the lochan Eileen car park (they charge here for parking) and after walking to the south of the Loch I took Andy to the lochside spot I had the spent the night a couple of weeks earlier.

We decided since it was early, to head southward to Loch Gamhna as it is further away from the popular path around Loch an Eilein, so we headed south to circle round Loch Gamnha anti-clockwise. 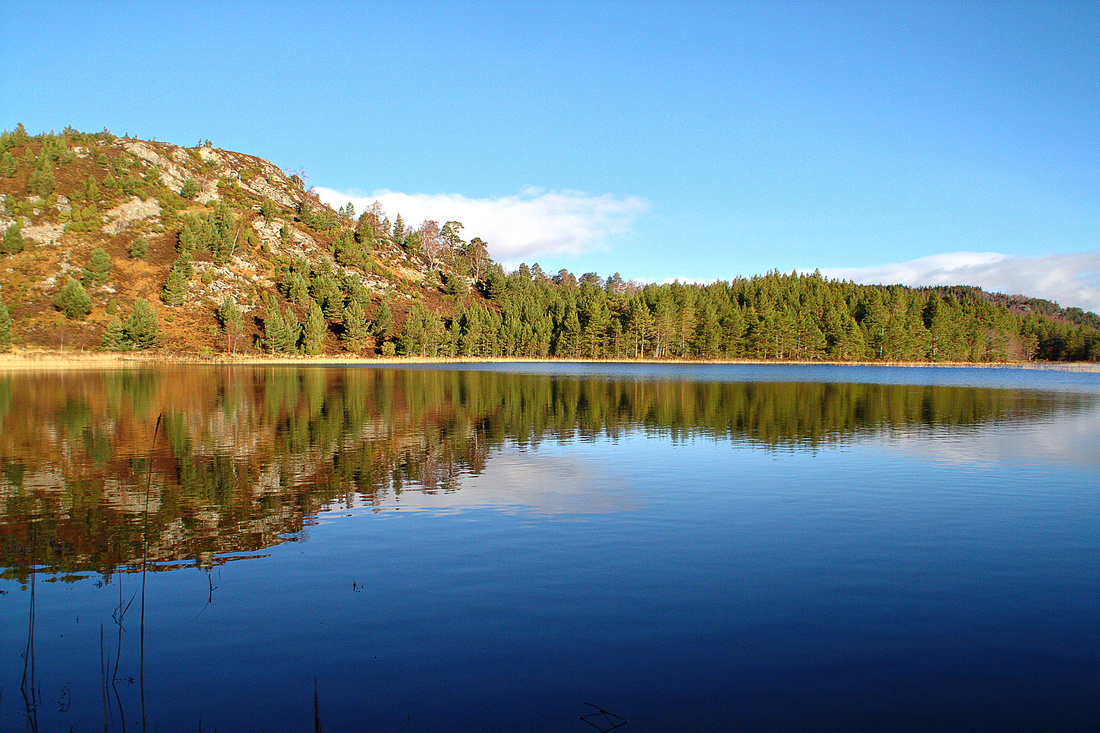 Loch GamnhaStanding by the banks of Loch Gamhna in the sunny morning.

There were a few camping spots right beside the path, but we had time and would prefer to find a more secluded spot. The terrain here is difficult and needs a bit of effort to find a place big enough to pitch a tent or tarp. 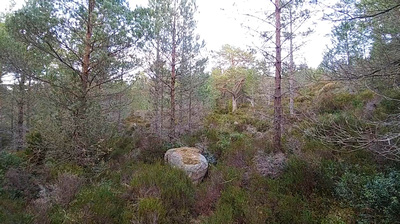 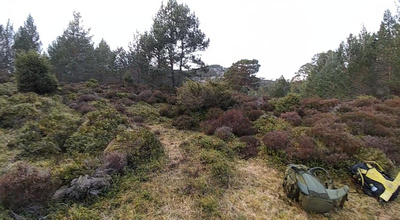 Eventually, we headed off the path towards a rise to the east of the loch and stumbled across a suitable place that could accommodate our tarp. We took off our rucksacks here and wandered around to see if there was anything more suitable. There was not so it was time to pitch a single tarp which left enough room to fit two bivvy bags comfortably. 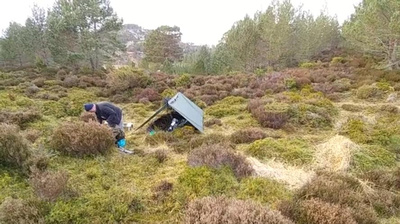 Bed for the nightThis was the only spot that we found that wasn't right beside the path, it was over a rise above the path, that very few people use. 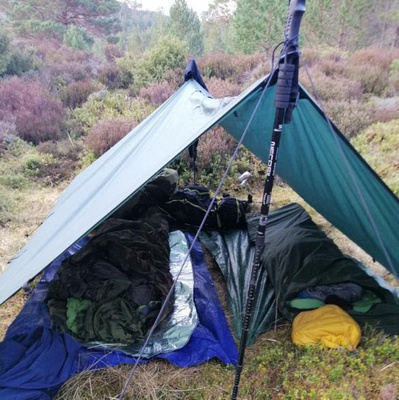 The tarp setupAndy rigged the tarp using walking poles, as there were no trees close by to tie the tarp to. This served us well during the night as it rained, it wasn't windy....luckily.

I disappeared to the feeder stream of the loch to get some water and there I marvelled at the old native trees and the wild terrain. Places like this make me happy, especially when there are no midges or ticks to spoil the party. I spent a bit of time collecting the water as I could smell something dead initially so I wondered upstream until the smell subsided before collecting water. I’d disturbed a herd of red deer earlier when searching for a camp spot so I assumed from the strength of the smell a winter casualty was lying in the scrub nearby and luckily not in the water. I've uploaded a video I took whilst collecting the water. I hope it helps to illustrate the tranquillity of this beautiful place. 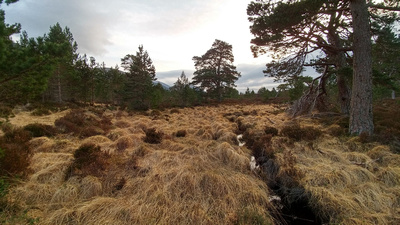 Collecting WaterFinding a spot to collect dome water for our meal.

With the water collected it was time to enjoy a few cheeky drinks and Andy's bolognese cooked on his spirit burners. 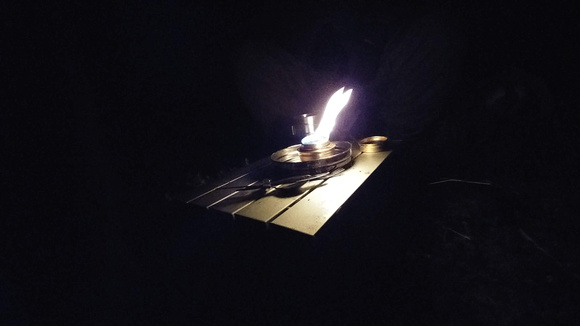 Cooking with a meths burnerBurning off the last of the meths after dinner was cooked. It was dark and the stars were coming out.

It got really cold as the stars came out and we saw frost forming on the tarp. I’d stupidly left my Buffalo shirt and jacket in the car and had decided on layers, but was a bit light on them so Andy helped me out with a spare layer of his - that did the trick. After a few more drinks I (unfortunately) tried to take some pictures of the stars, but silly me had forgotten (due to the lager) that I needed to use the remote for longer exposures so this out of focus offering lit by Andy’s headtorch was the best I got. Next time I will try to remember to use manual focus and also use the remote shutter button. 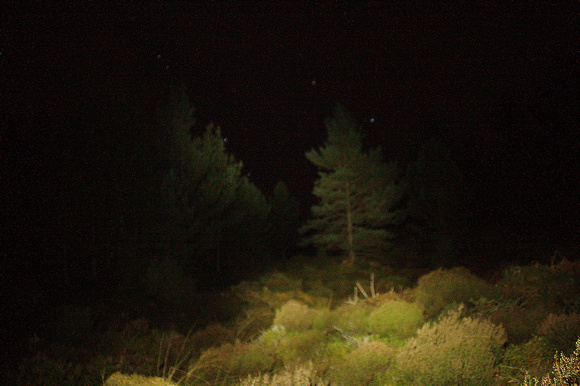 Lager-Fueled Night PhotographyNever a good idea to operate any kind of machinery after drinking lager..... even a camera!

It rained a bit overnight and in the morning, the mist and cloud cleared quickly and the sun eventually rose above the hills as we ate our fry up. We packed up and left just a dry patch and some squashed grass. 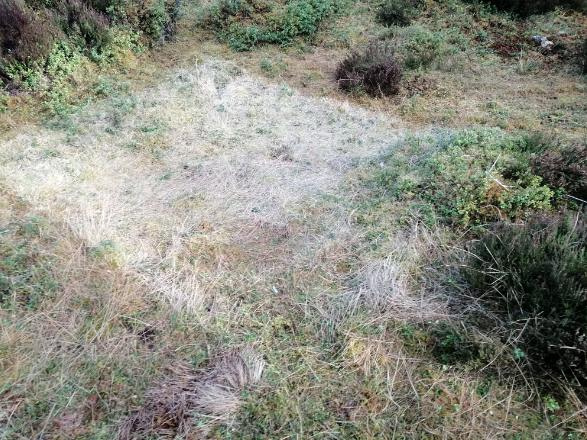 The dry patch gives away where we slept

As we walked along the forest tracks back to the car, it was a glorious warm morning, there were only a few small patches of snow apparent on the Cairngorms and it seemed like winter was over. It was time to head to a remote glen of ancient pines, which luckily had a bothy in it, which was our backstop if the negative weather forecast was to turn out, which seemed unlikely this fine morning.

We headed to the next car park for our 7k walk to our destination. This was somewhere I’d been back in 1991 and it was my first bothy visit. My memories are vague, but I remember an old coarse bare stone bothy and a cold night sleeping on a floor by the door. It had recently been renovated and I’d read good things about it.

The walk to the bothy was interesting. I remember back nearly 30 years ago having to navigate paths from Braemar that had been washed away by the fast flowing river and nothing had changed as the river was still very busy washing away the paths, ancient trees and even the old bridge that I’d crossed at my last visit.

This picture and (unedited) video below illustrates the problem and I’d hate to be on the wrong side of this recently formed gorge when the river was in spate. 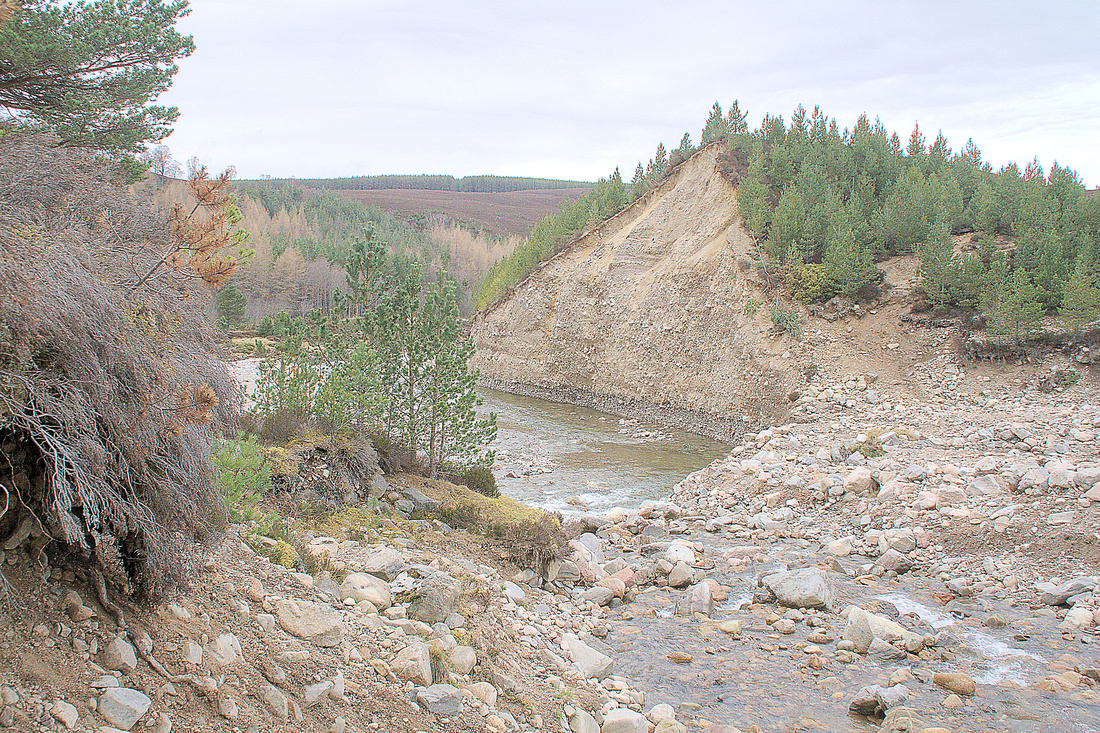 Washed awayThe river(s) here washes away hills, roads, bridges and 300 year old trees and it has been doing that since the ice age, probably.

The sky was greying and the wind was picking up it was a dramatic change in such a short time since we’d left Loch an Eilein. We met a few hill walkers on the way who were coming off the Cairngorms early, one couple of lads told us they’d abandoned their route after the first peak and retreated to safety as they could hardly stand, they had spoken to other walkers who told them that gusts of 85 mph were being reported at the Cairngorm weather station.

As we reached the bothy it had started to rain hard and the wind was gusting. We’d abandoned all hope of a tarp amongst the ancient trees and were glad to walk into the most luxurious bothy we’ve ever visited. It had changed so much since my last visit and it was hard to believe that anyone could just turn up and stay here for free - even the firewood for the stoves was provided! 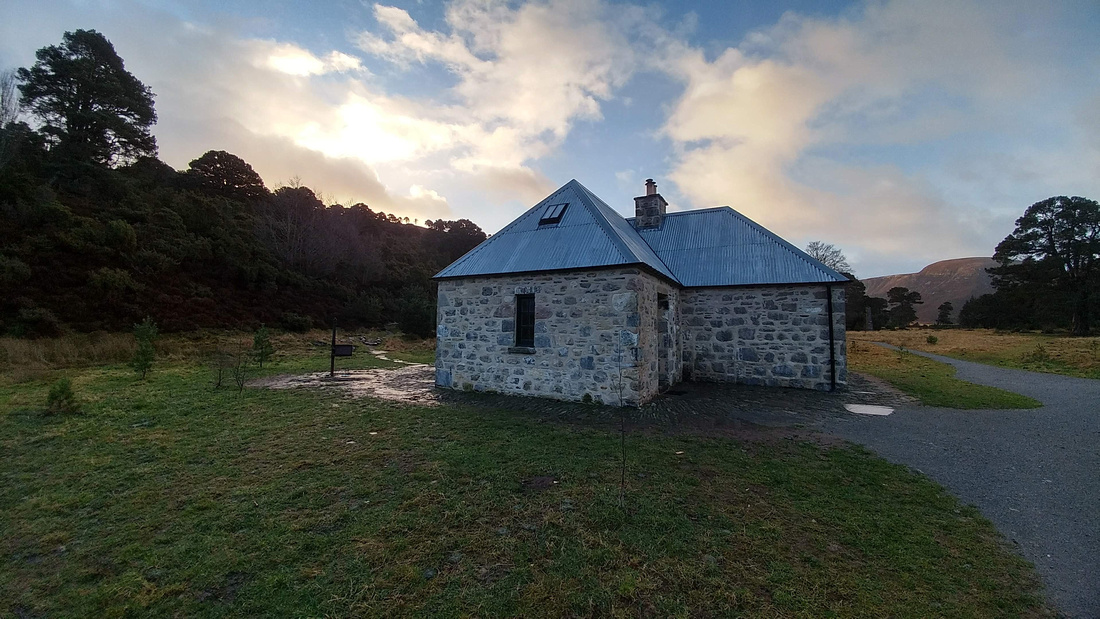 The bothyOur most excellent home for a night. 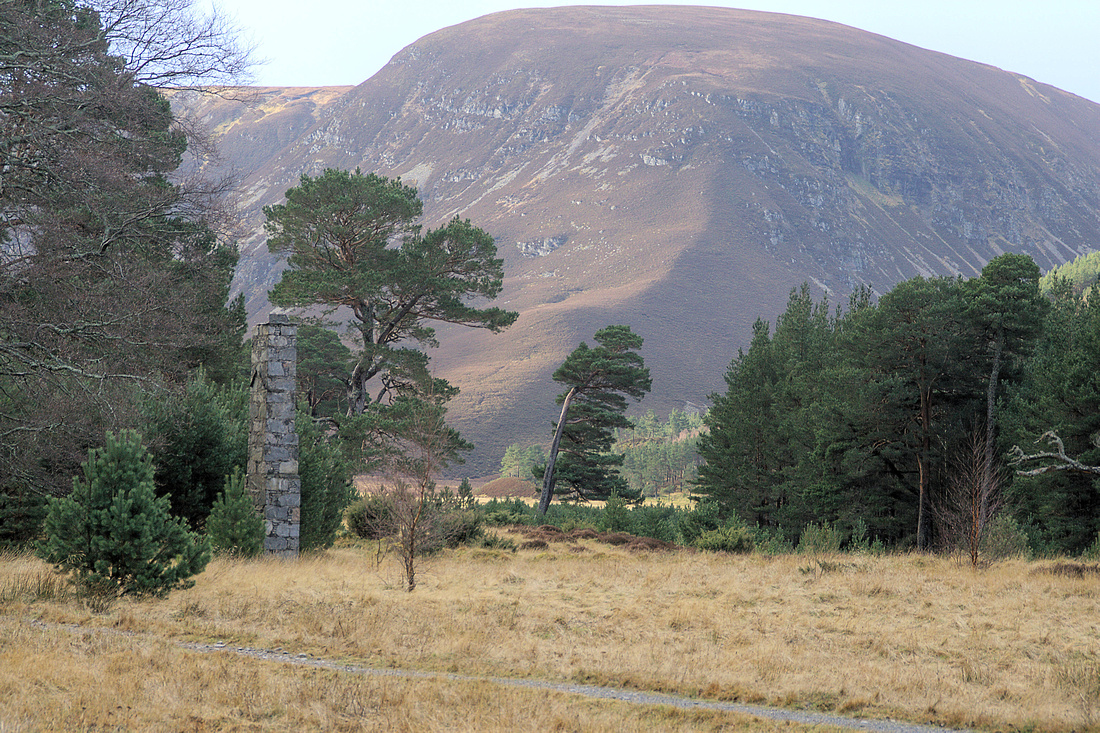 The view from the bothy 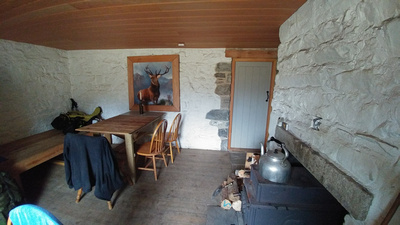 The room that we slept 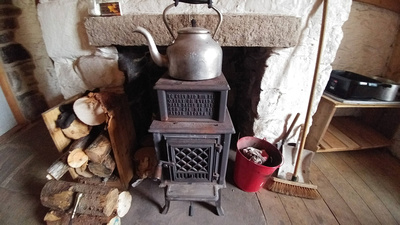 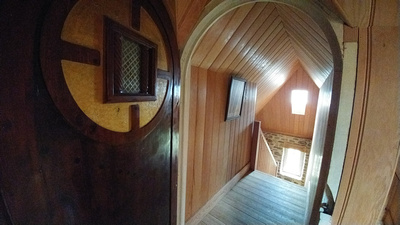 Upstairs in the bothy 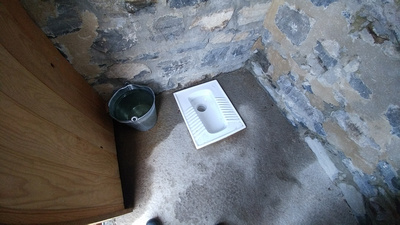 The bothy toiletThis bothy actually has a toilet! You flush it with the bucket and there is a pool just outside where you can fetch the water from!

We had the place to ourselves the whole time. It was a warm cosy night in this luxurious and remote place that even had an outside toilet. The weather worsened outside and the rain was rattling on the windows, we could hear the gusts of wind draw on the chimney and see it affecting the flames in the stove. We were toasty, the stove was glowing as was Andy’s spirit stoves cooking up a tasty dinner that I savoured as I washed it down with some cold beer.

Inside the bothyThe wind outside can be heard drawing on the stove. This was the room in which we spent a very comfortable night.

I retired quite early and was awoken a few times by the wild cairngorm weather outside. At about 2:30 am I ventured outside to the toilet and returned feeling like I’d been jet-washed by the high wind and horizontal rain. I removed my wet fleece and climbed back into my bag knowing it would be dry in the morning due to the heat and glow coming from the stove.

After a hearty fry up in the morning, we headed back and met a couple of groups of folk on the way who were planning to stay at the bothy. We were lucky to have had it to ourselves.

We walked with rain showers on our back but it was brightening. I caught glimpses of the Cairngorms tops in between showers and they had a fresh covering of snow, winter was not over yet. 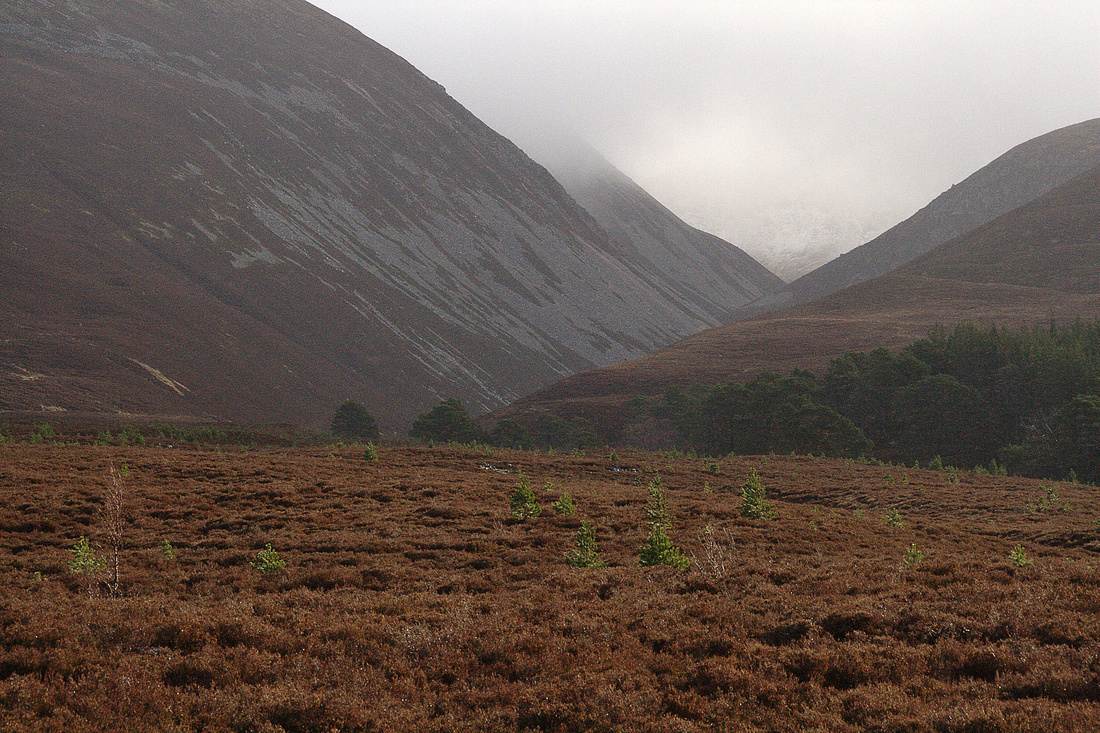 The CairngormsA covering of snow can be seen through the clouds

A little before we reached the car, the sun came out and a rainbow formed in the receding shower. It marked a colourful end to a great trip. 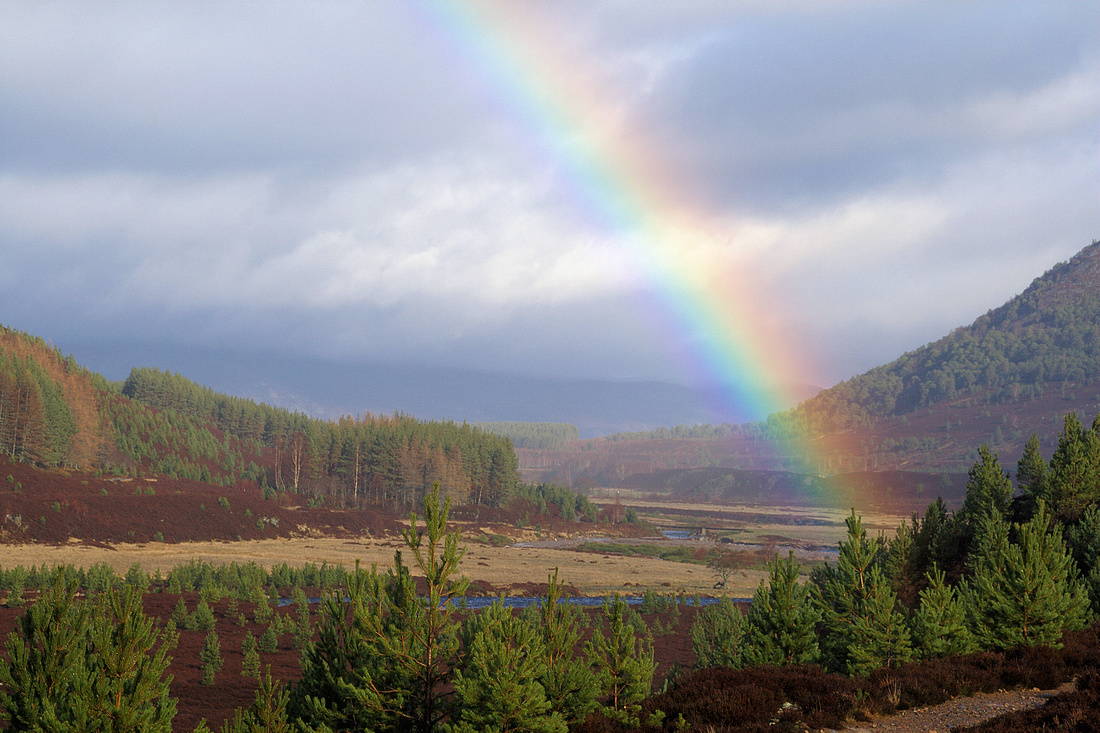 Chris B(non-registered)
Thanks Tim, I'm really glad that you enjoyed the story and the pictures :) The toilet is a luxury for a bothy as at the others I've stayed, you're only provided with a spade and instructions to dig your hole far away! Thanks again Tim.
Tim Hill
Thoroughly enjoyable Chris, a very good, well-presented story if I may say so. Great! Nice images...