I set off for an Easter weekend with my mates Andy and Bob from the Linn of Dee car park with the loose objective of hanging around in the Cairngorms (I like vague missions). We’d arrived early on Saturday afternoon and a couple of hours later had found ourselves camping beside the river in Glen Derry. 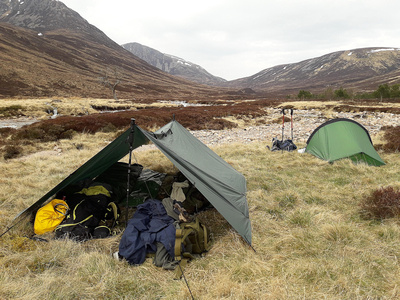 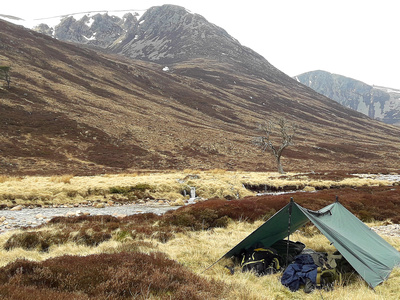 It was boiling hot by Cairngorms standards and it was great! We’d all packed to save weight so I had an out of date dried ready meal that turned out to be a nice shepherds pie after adding 500ml of water and waiting ten minutes.

The ten-minute wait gave me time to reflect on the 180 grammes of ingredients and I realised that this was never cooked as a shepherds pie and then dried, no this is easier than that. They have put the dried ingredients together so when you add water the mix of ingredients rehydrates to taste like shepherds pie.

Now this may be obvious to the reader, but to me I thought the dried food folks would make a massive shepherds pie, then they would dry it and powder it and stick it in a bag to sell on to mugs like me for £5.99 meal, which is dearer than Wetherspoons - and you’d at least you’d get a pint with that!

But no, they just bulk buy dried potato, dried mince, gravy powder and various dried herbs and then chuck it in a packet to recreate a mushy shepherds pie. This is my next project and I’ll be buying many dried ingredients from various sources and will be cook testing to figure out what I can produce and then vacuum pack. Anyway moving on from my latest camping trip revelation - oh, I had two revelations actually as Andy's long-handled spoon was the bee knees for eating from the mush bag.

So we packed up camp in the morning and carried on up the glen until we reached the Hutchison memorial hut (or ‘Hutchy’). Someone had left a bike outside and it was a bit unexpected to see a bike here as it was rough terrain to get here - this hut is at around 2,000 feet. 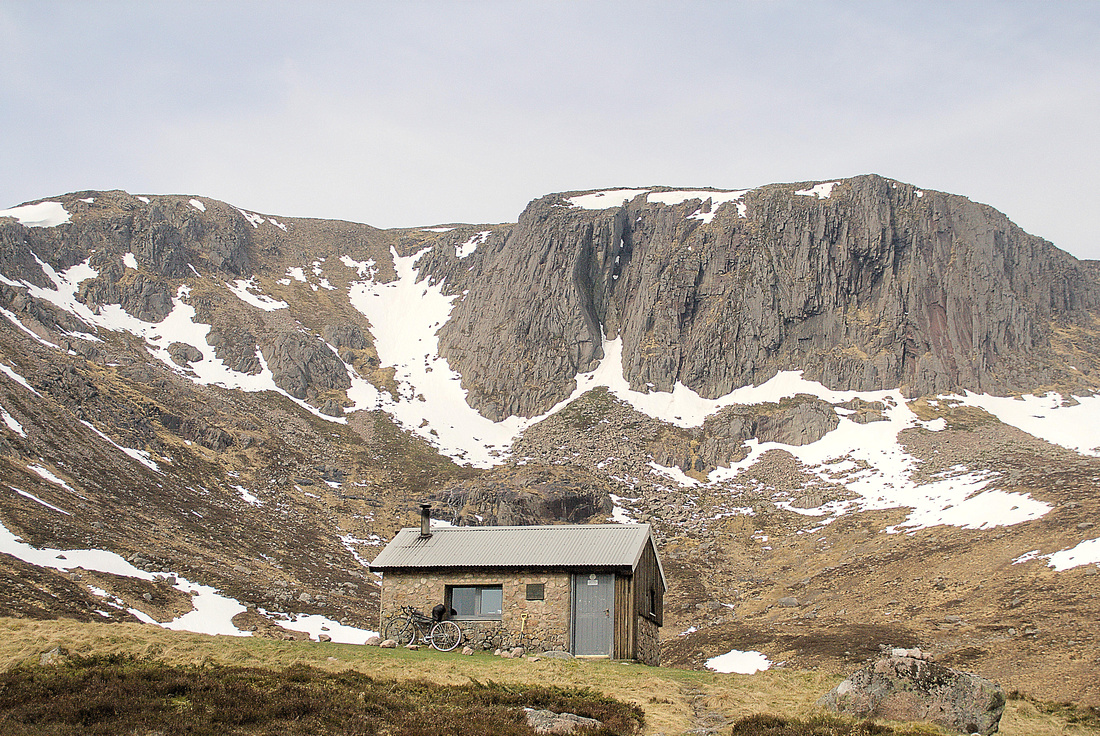 We went inside and met the owner of the bike who turned out to be someone we had already met in Cadderlie bothy during our visit there in January. He’s a decent guy and with this hit rate, we’ll likely meet him again in another bothy in the future. So after pleasantries were exchanged with the soon to be gone occupants of the bothy, we loosely agreed to climb higher and get to the top of Bheinn Mheadhoin which is 3,877 feet (1,182 metres) - well I don’t know if Andy explicitly agreed to this, but he doesn’t know Bob that well, who would have tried for at least two more peaks if he thought he could get us to agree...

So we left our heavy packs at the hut and headed up the hill like a bunch of successful weight watchers with just spare jackets and gloves and various other bits that we think we would need for a Cairngorm summit. Bob, at least had remembered the map and compass, whilst a peanut Starbar had been my necessity and I’m not a sharer... 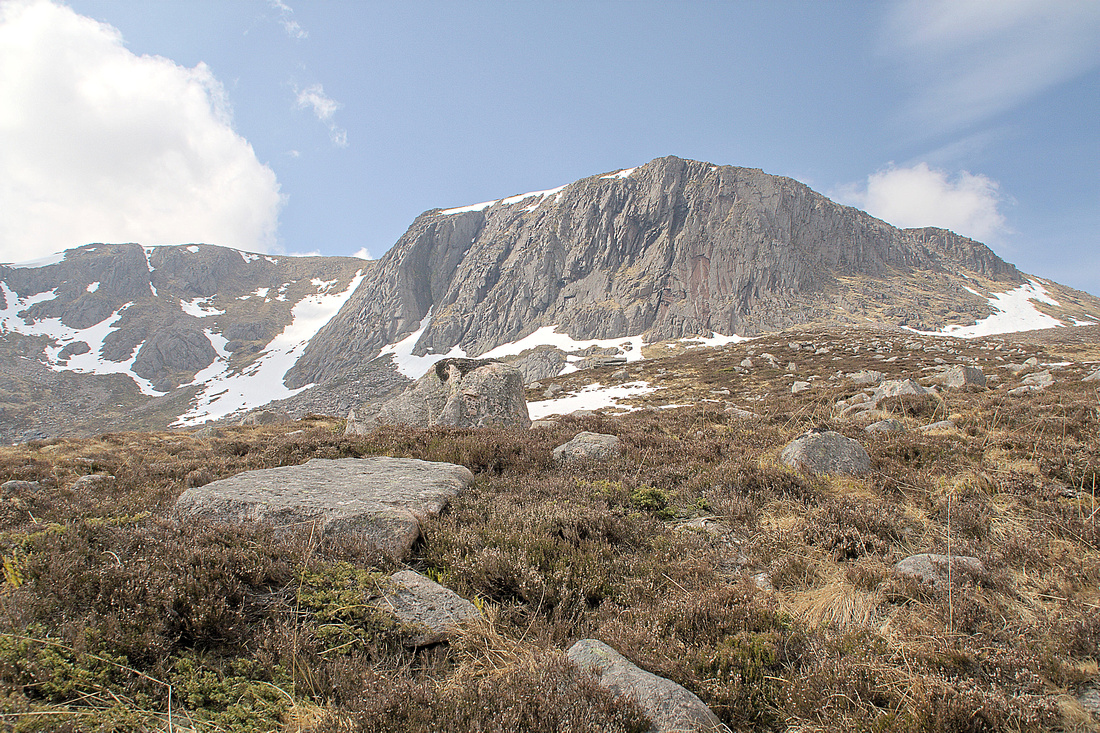 The Crimson SlabsClimbing to Loch Etchachan from the Hutchison memorial hut

At 3,040 feet we reached the impressive Loch Etchachan which was still icebound but it was melting in the spring heat. This reminded me that at the Hutchison hut, a few hundred feet further down from where we now stood, there is a pond and we had noticed the frogs jumping about in it out of the ‘Hutchy’ window. I’d checked out this pond and found many frogs in it that were spawning, this pond seemed by the number of corpses, to have an alarming mortality rate for so-called ‘reproduction’. This activity in mid-April also surprised me because at near sea level, where I live, the frogs spawn in February a good couple of months ago and you realise then how short the growing season is at this subarctic location. 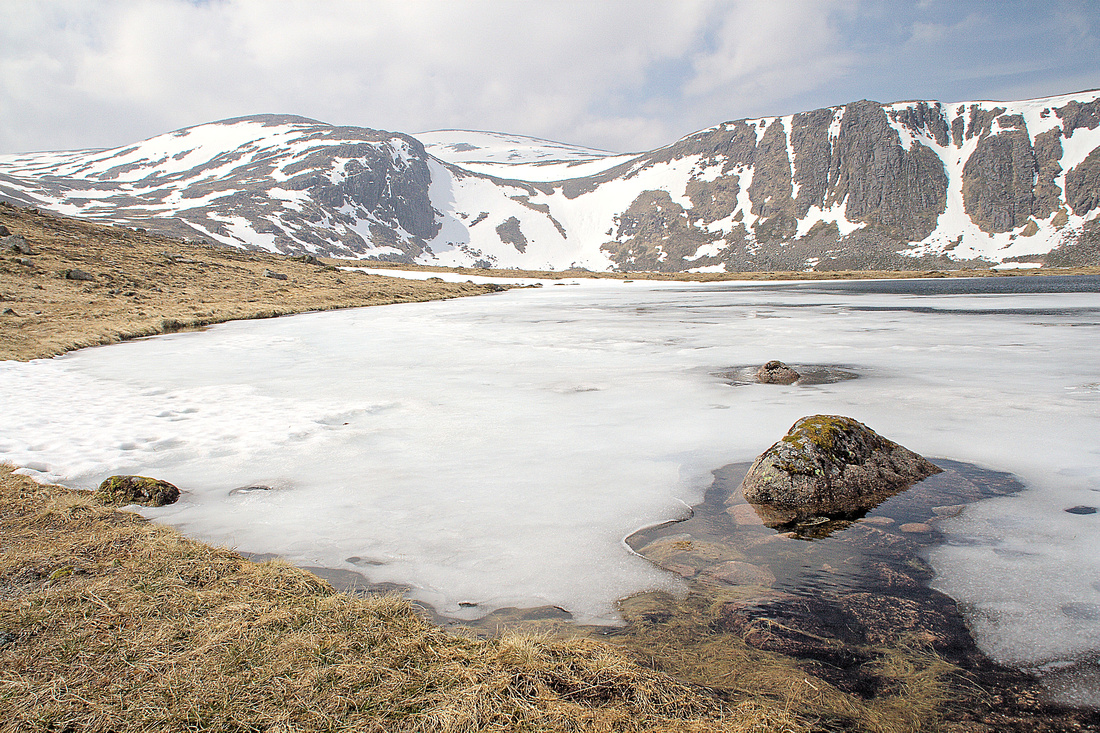 Loch EtchachanAt 3,000 feet Loch Etchachan is the highest large body of water in the UK. The picture was taken in late April 2019

Standing now at loch Etchachan with its icy covering, I wondered if the frogs actually bother turning up here at all? Whilst we were taking pictures, videos and I was wondering about the frogs of Loch Etchachan, a young lady appeared from the direction of Derry Cairngorm and started speaking to us. We spoke to her for a while and I was very impressed with this young woman in her twenties who was crossing the Cairngorms like a boss. At her age (many moons ago) I was too much of a feartie to do things like that, even though I wanted to and I’m always glad to see the young folks like her who are out there and just doing it.

After our chat, she took off up the hill to conquer Bheinn Mheadhoin whilst we remained at the loch trying to conjure the will for the next 800 feet of our steep climb to the top of the same mountain. We eventually set off and as I climbed, I decided that I liked this particular mountain as the stone was very gritty, so you could step with confidence on the rocks knowing that your feet would grip. This helps progress for me as I go ultra cautious on hills with slippery rocks as I am always mindful of my dodgy ankle which is easily twisted and this fear slows me down. 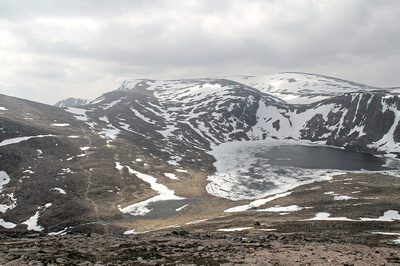 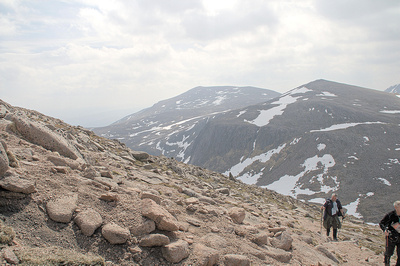 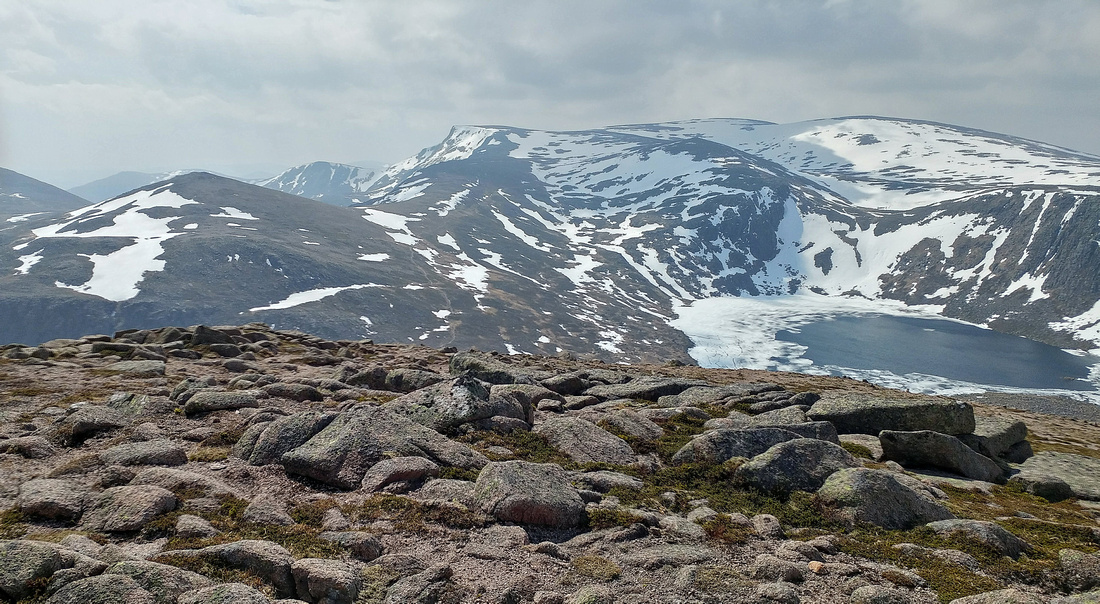 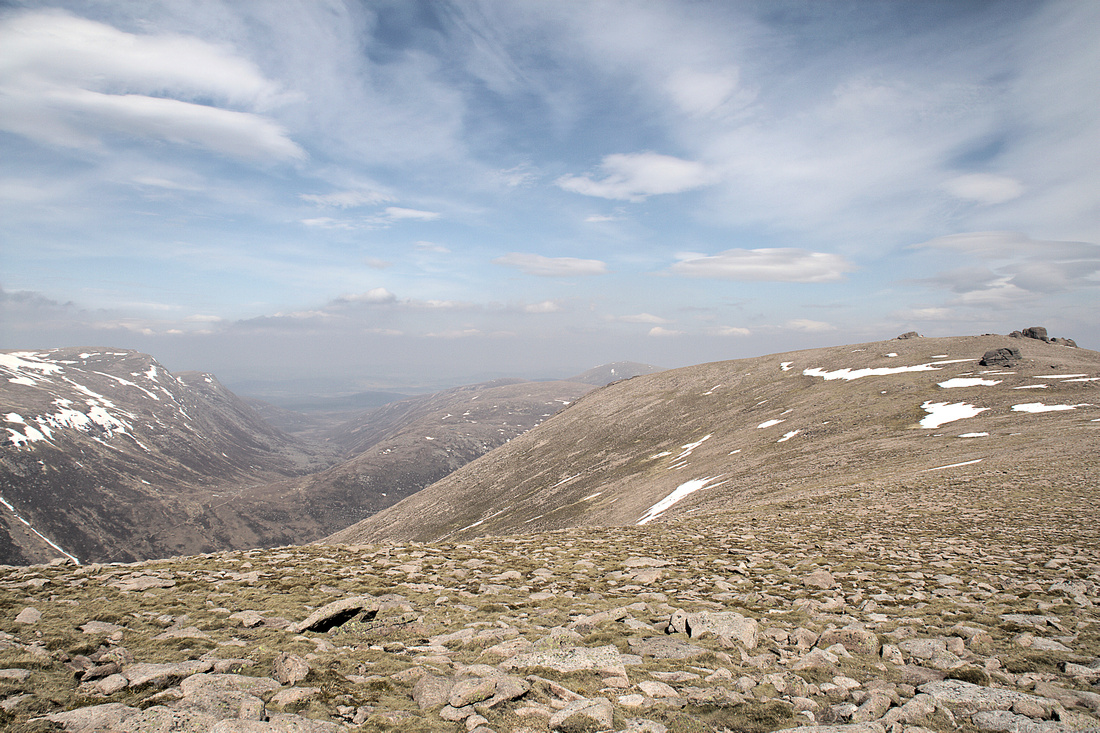 Heading to the summit of Bheinn MheadhoinCainrgorm mountains

As we reached the top if got windier and windier. we made our way across the summit plateau and we blew towards and past a couple of barns (Tors) that were interesting to merit a stop and take some pictures and videos. The wind whistled through them and made interesting sounds. 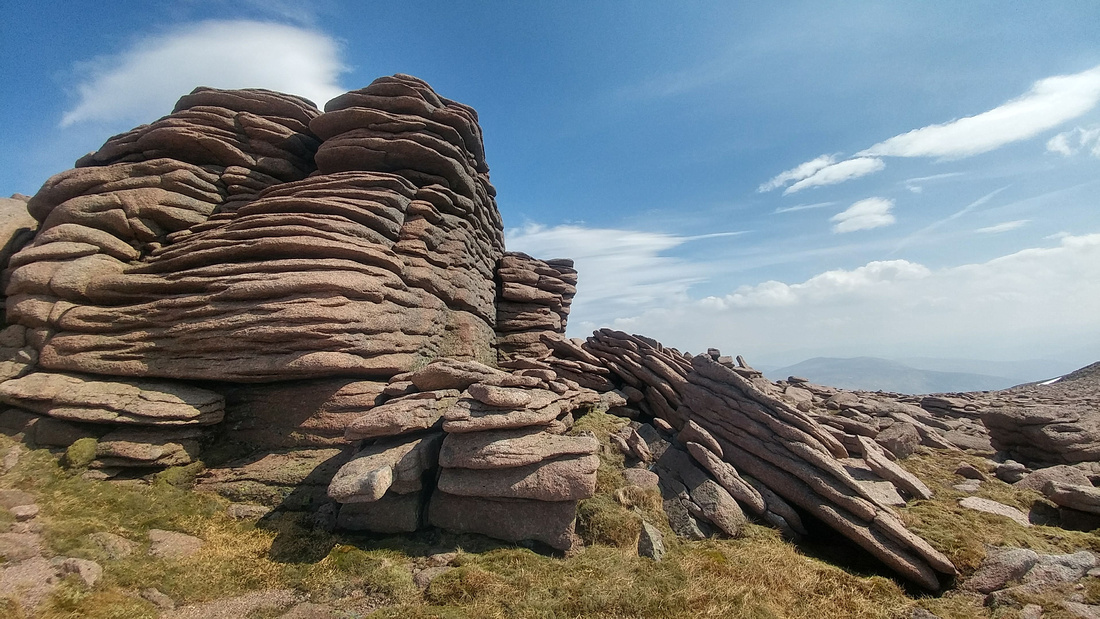 A barn on Bheinn Mheidhoin (Tor)

The force of the wind and elements in the Cairngorms can be seen by the amount of toppled stonework from the barn, but I wondered when this fell, was it last year, a decade, a century? I’d read once (or it may have been the film “the Cairngorms in Winter”) that the original Cairngorm mountains were very high, but they have eroded over time until they don’t exist anymore - the 3000-4000 ft cairngorm mountains that you see now is actually just the hard volcanic rock  that lay below the original mountain range. 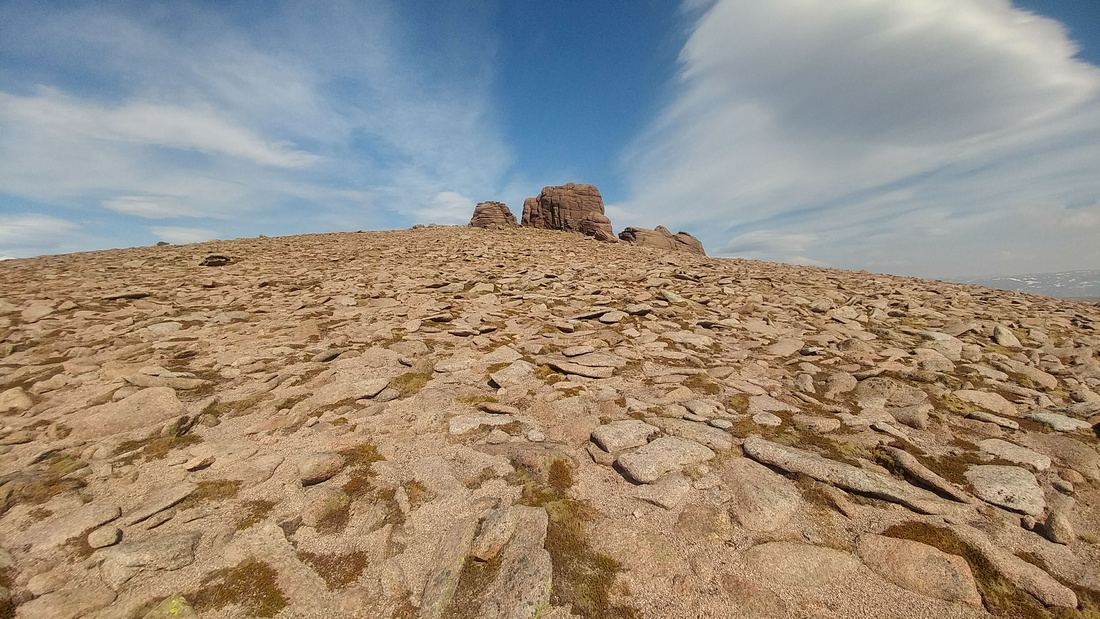 The summit of Bheinn MheadhoinTo claim the summit you have to scramble 20 or so feet to the top of the Barn (Tor).

We eventually reached the summit and its 20-foot barn that needs to be climbed to make a proper claim as having conquered the mountain. It looked very difficult as we approached from the south but once we reached the north side we found an easier scramble and there was the young lady we’d met earlier brandishing a climbing helmet hoping that we could assist her to reach the top. It turns out that she is scared of heights so she was relying on a random passerby on the top of a Cairngorm mountain to help her scramble to the top so she could claim this peak.

Fortune was on her side despite the odds in the shape of us three! She donned the helmet and scrambled up with Andy and Bob and her face was a picture of happiness on the top knowing that she’d achieved her uncertain aim and made another dent on her fear of heights. My gentlemen friends also helped her descend, which is always the hardest part of the scramble for someone who’s nervous of heights and we all headed off the mountain together back to the Hutchison hut. Once there she carried off downhill towards her car at Linn of Dee whilst we remained at the hut for a night in the warmest bothy that I’ve ever visited.

After we’d settled in we were joined by another young lady who took one look at us three old geezers in the ‘hutchy’ sweat box (it’s massively insulated for Cairngorm winters) and promptly put up her tent - She joined us for tea later and she told us about herself. She was a trainee GP and was very down to earth and we had a good laugh. She asked us about whether the water was safe to drink and Andy told her that he always drank the water out of streams and never had a problem. She replied that “Well you are likely protected by all the alcohol in your stomach and I think I will be safer to filter mine”. Oh, how I laughed!

As it got dark we were joined by a young couple who also camped outside, but until bedtime, it was a great night of bothy chat where groups of strangers share a common space and common hobbies and most importantly have a laugh.

In the morning it was time to tidy up and head home. We marched all the way home through a beautiful hot morning and as we walked through the old Caledonian pines I was at my happiest.

It was a great weekend with good friends, friendly strangers and beautiful surroundings. I’m so glad we went. 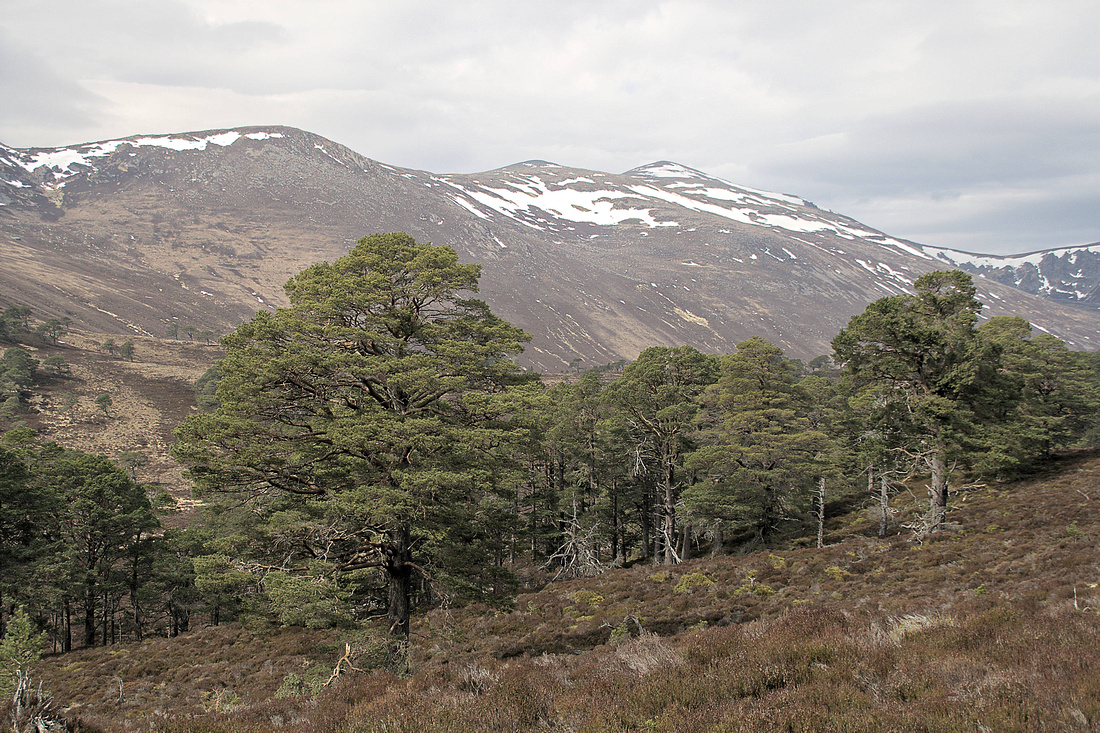 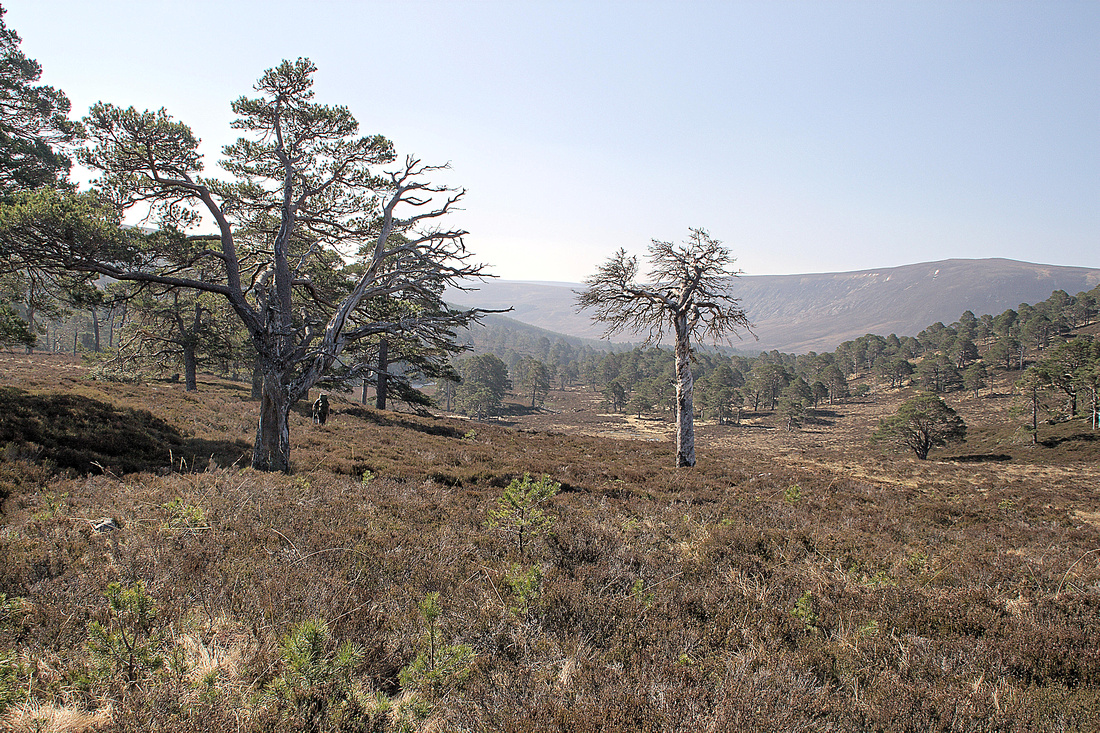 Chris(non-registered)
Thanks Tim. It was fantastic to be there and now I want to go every weekend! It was a good laugh and great memories.

Have a great bank holiday!
Chris(non-registered)
Aye it was great, I really enjoyed it. It's a pity I'm booked up for the next three weekends but hope to get away after then if your availability allows.
Tim Hill
Great writing Chris and wonderful images, what brilliant scenery Scotland has, especially when the weather is so kind.

It's reassuring young people are still interested in exploring and being in such beautiful places.

Enjoy the bank holiday weekend all.
Andy P(non-registered)
Good write up for a great weekend away. Looking forward to our next exped.
No comments posted.
Loading...