Until the age of seven, I lived in a wee cottage in the Highlands of Scotland. The house bordered woodlands, hills and a big pond and these surrounding features were there for me to explore at my leisure. It was fantastic, I climbed cliffs and trees and generally had a ball. I received an “Action Man” adventure kit for my Christmas around the age of 6, which I wore on my belt. That made me even braver as I then considered myself properly equipped to adventure as the kit contained a mirror that I could use to send emergency signals!

Then our family moved to the central belt of Scotland. It’s a nice place St Andrews, but compared to ‘my’ hills and forests in the highlands, it was rubbish. I never got over that and it means that I have unfinished business when it comes to adventuring!

So there I was touching 50 and standing on a steep slope in the rain. 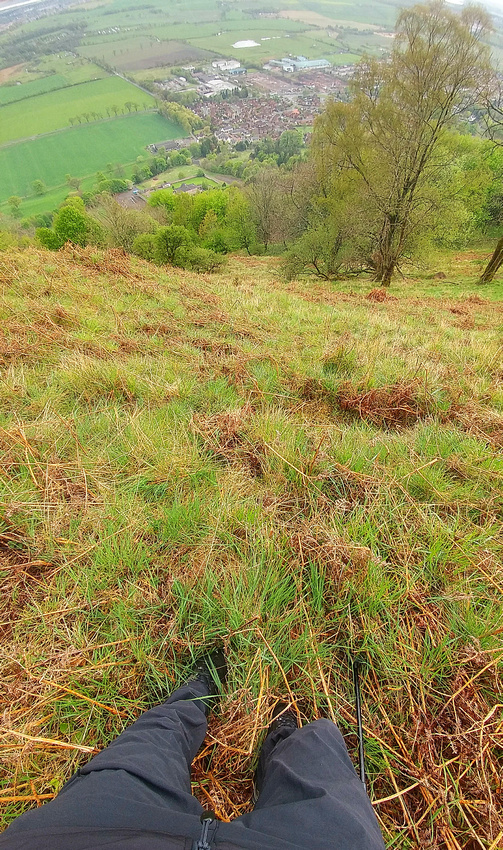 Climbing Wood Hill head-onThat took away some of my energy!

Further down the hill, as I’d zigzagged upward, the going had got dodgy on loose earth that had become slippery when wet. When standing on it, my feet would just slide which is not great on steep slopes, but my walking poles saved the day - as usual. On the whole, the predominantly tufty grass made for a good grip, even in the rain, luckily. 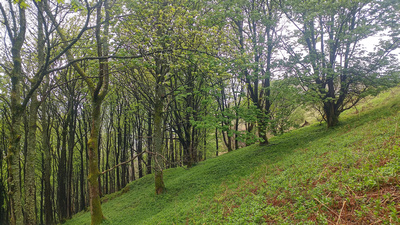 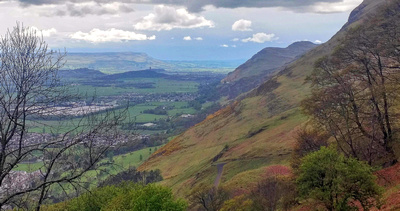 It was a fantastic view westward along the steep escarpment of the Ochils and this is why this hill, Wood Hill, was my favourite. This day was Saturday and I found myself with an excess of energy, I think it is springtime that causes this as I’m particularly hyper in the spring, particularly March and early April. Anyway, I had that spring in my step and a favourite hill that I had climbed dozens of times. I’d always climbed it the same way as it is a steep hill and it seemed madness not to follow the path due to the effort involved in tackling it head-on. I was bored with the same old route though, so this time I'd decided to give it a go. 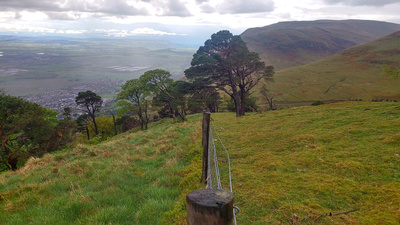 Fence lineOn the right of the fence is where the sheep graze the hills. As can be seen, they make for efficient lawnmowers and the area that they graze is massive. 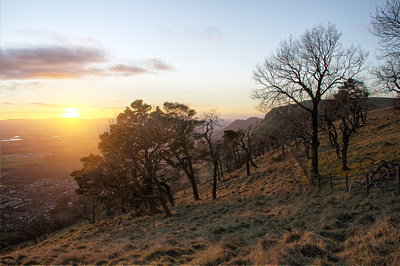 Sunset on Wood HillShooting a sunset from wood hill of the old trees that stand on its slope. (Taken Jan-19)

I didn’t bother going to the top of the hill, the wind-tortured trees at the fence border (between the woodland and the sheep grazed and naked hillside) enthral me too much for that. So I walked eastward along the fence border to the woodland that drops steeply into a wee glen. I’d been near here before but had never explored it - today was that day.  After hopping the fence at the boundary of the wood, I spied what looked like a great camping spot below me and I descended down to check it out. This woodland, despite overlooking towns and villages, is protected by 1,000-foot steep slopes so it’s not often visited.

The leafy flat area I descended to would make a nice spot to camp, but carrying a heavy pack here is less than desirable. The trees here were all odd-shaped by time and circumstance. Trees do that visibly, whilst for us humans, it’s generally hidden inside our heads. 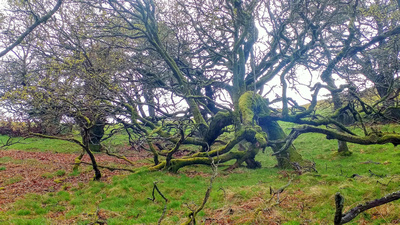 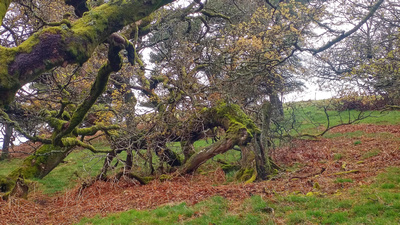 I started heading southward following a hint of a path, I knew that I’d soon start descending rapidly, but I was intoxicated by this fantastic old woodland. 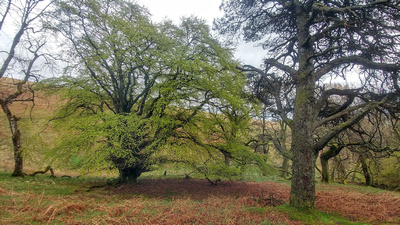 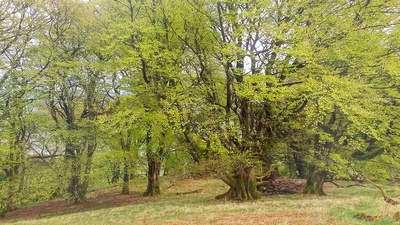 Before I reached the main slope, I came across some grand old beech (?) trees. One tree had split in half, a mass of wood lay rotting and undisturbed beside the other half that was still standing. Despite the tree being split in two, it was still a massive tree and it was magnificent. 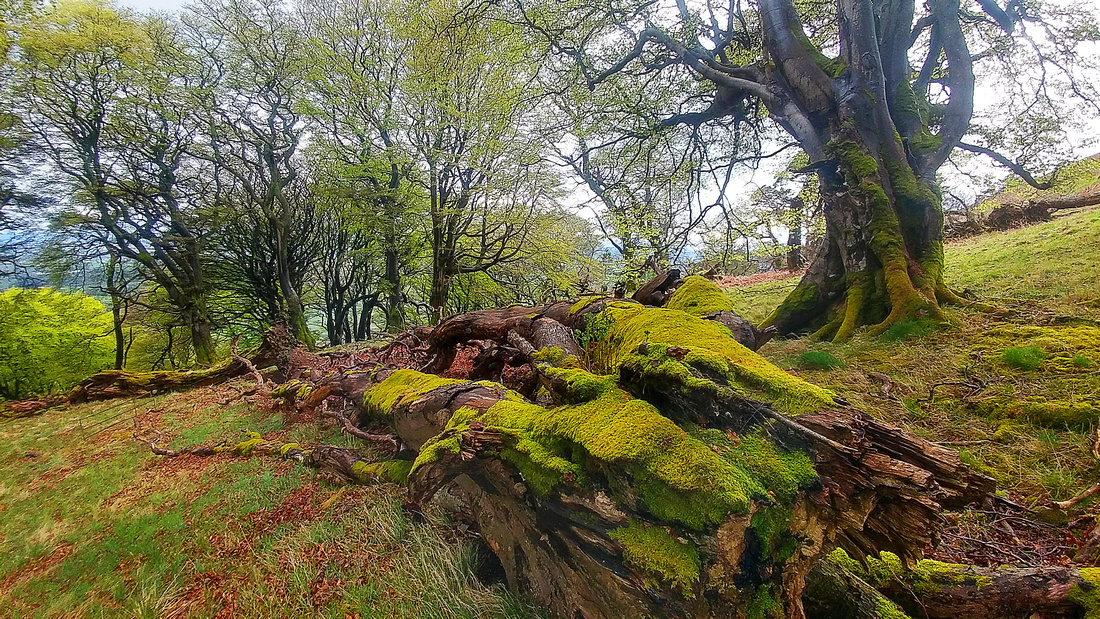 Half a treeJust lies there undisturbed 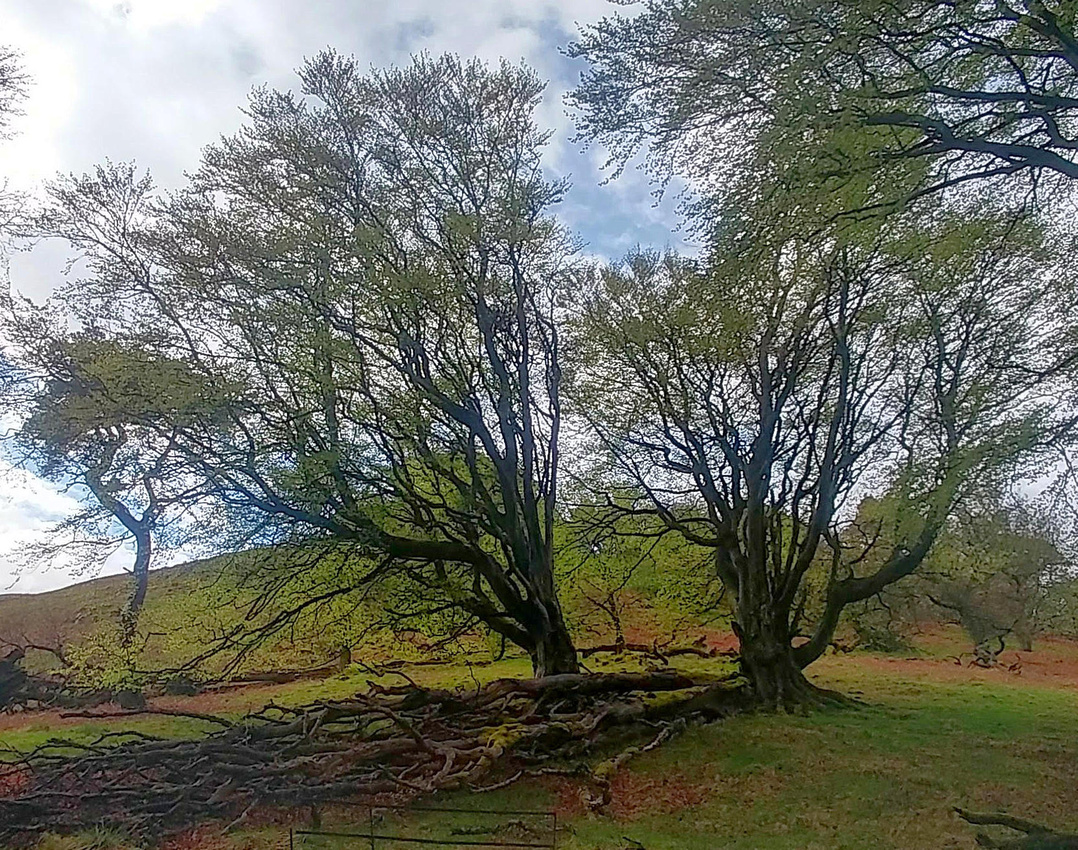 HalvedThe tree on the right had split in two. This picture does not do it justice as it was big. My head was level with the big branch on the right of that tree.

I then reached the steep slope that plunges to the Forth Valley. I could see an outcrop sticking out from the trees below me, so I decided to carry carefully on - I could always retrace my steps. I reached this outcrop and could see another outcrop below, oh well, why not. As I picked my way towards it, I realised that a couple of deer had been sitting on it as they jumped up and grudgingly walked eastwards down a tricky slope. 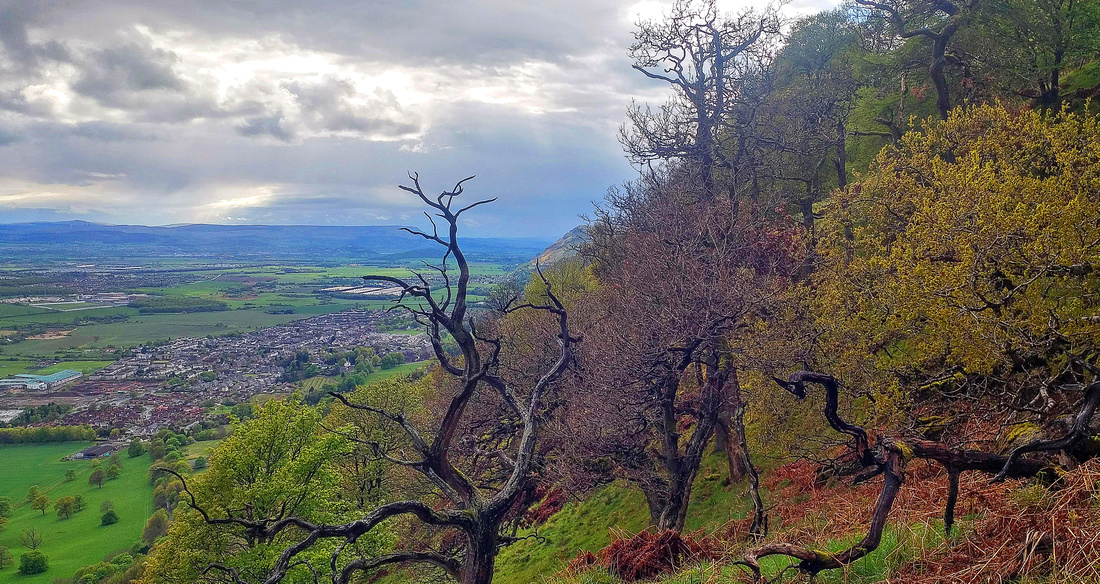 At this outcrop I had no intention of following the deer, I was going to the west side as it looked less difficult and I could spy the hint of another flat area through the trees below. As I picked my way down, the slope turned out to be grass and moss covered scree. I spotted a scree shoot that was not moss-covered and I headed to it. The shoot was only 10 metres or so but it was the easiest part of the descent as I stepped and slid down it using my walking poles as ski-sticks. 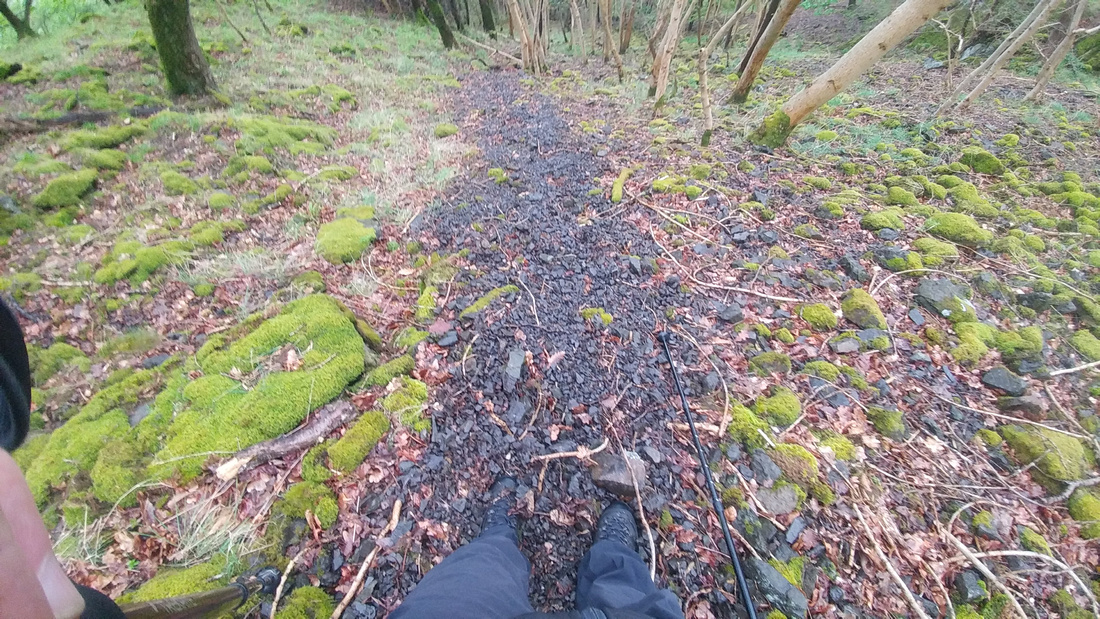 I eventually reached the next outcrop and realised that I could now see the woodland path below, I’d made it and I’d also discovered a great wee camping spot above the path. 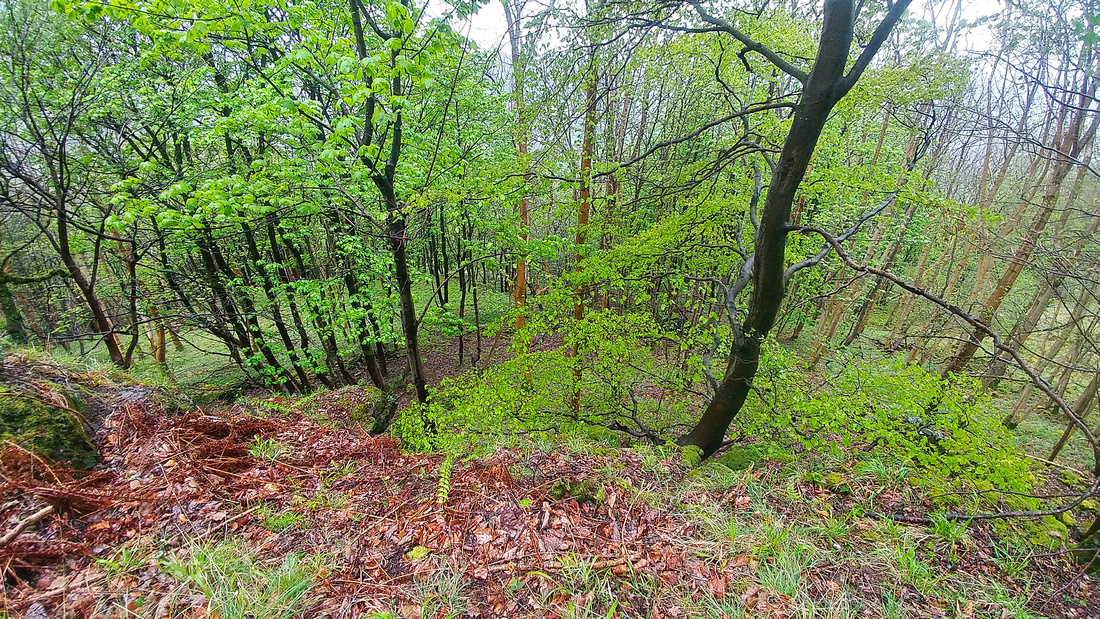 I then joined the woodland path back to my car taking pictures of the springtime woodland and bluebells as I went. I realised that I had much more exploring to do here and my childhood adventure kit, that had once fitted on my belt, had now morphed into the rucksack that I wore on my back. 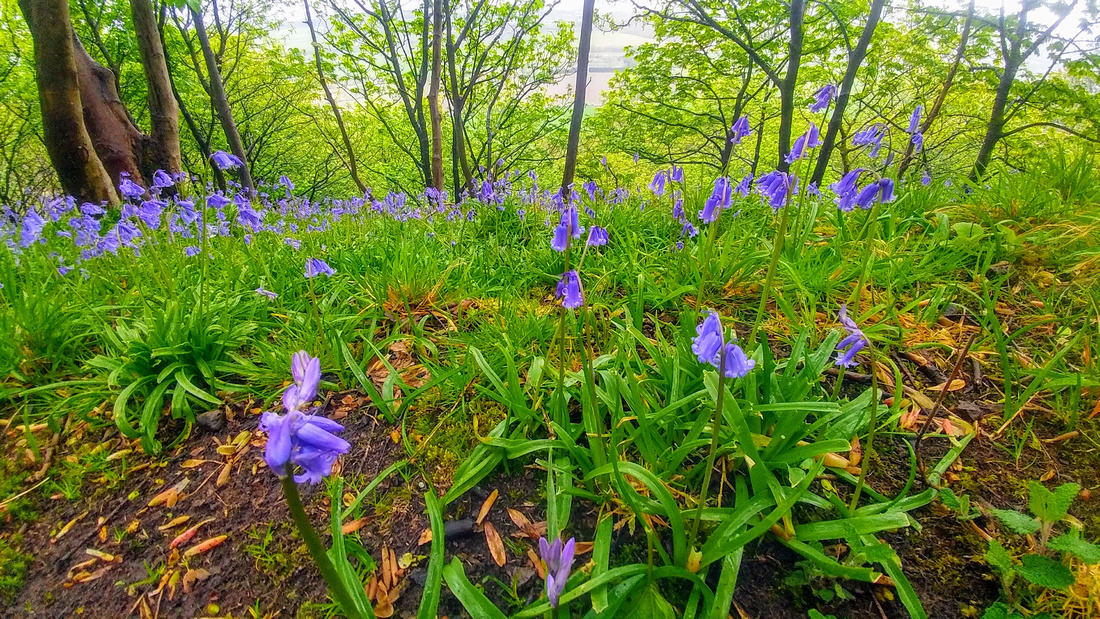 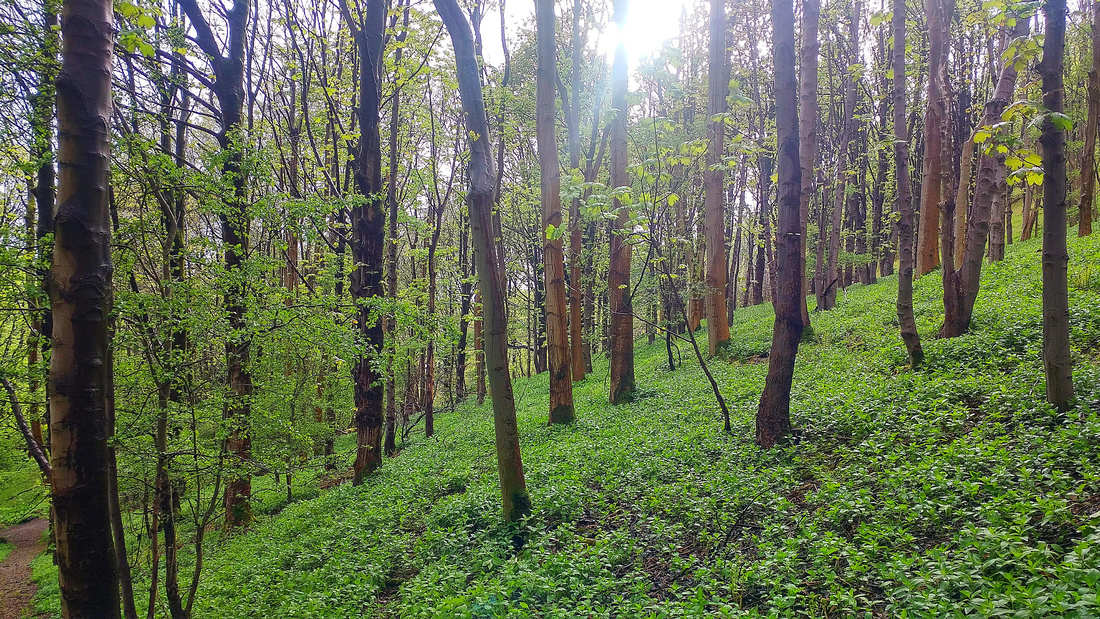 Tim(non-registered)
My mid-life crisis was motorcycles, thank you lord that is now out of my system, these days and I just have to look at one and I smell hospitals! Oh yes, photography for me every time...
Chris(non-registered)
Thanks Tim, I'm glad that you ebjoyed it. I'm also relieved too that you too remember the adventure kit. It was the best thing I had at that age and I've never forgotten that feeling of preparedness that it provided. My mountain goat escapades are my mid-life crisis (I think). At least it's cheaper than a sports car!
Tim(non-registered)
Older in body Chris but in mind, as fresh as a Bluebell. A wonderful place to spend a childhood, I enjoyed the memories and I remember the “Action Man” adventure kit being the same age as you, I played hours with that also.

Wonderful writing and images Chris, you get more like a mountain goat every outing! Meant in the best possible way of course :)
No comments posted.
Loading...