I arrived at the Ben Lawers Car Park and started walking at 2 pm. At this time of year, there's plenty of time to walk as it is light until after 10 pm and even later if there's no cloud, so I wasn't rushing.

Everyone else, however, had different ideas and as I walked the approach path, I passed dozens of people going in the opposite direction. They obviously had seen the mountain weather forecast where I'd relied on the local forecast for Killin. As I'd find out, the weather at over a 1,000 meters would be much worse than it was in the nearby village with people walking about in T-Shirts as I drove through it.

The start of the approach path takes the walker through a little experiment. It is a fenced off area of land that has spring loaded gates that snap shut behind you and this area is full of trees and plants and it is beautiful despite not being that old. This is the way this land should look, but the barren moorlands that surround this little oasis of nature are overgrazed by sheep and deer and nothing but grass and heather seem to succeed as a result. As I walked through here I wondered what the surrounded view would have been if us civilised humans hadn't rendered this landscape into a virtual wasteland. Natural ScotlandA fenced of area of moorland near Ben Lawers that has been allowed to regenerate.

I headed up the path to Bheinn Ghlas, which is a hill worth climbing as it is on the way to Ben Lawers! As I reached the summit ridge I was engulfed by fast moving cloud and luckily navigation was easy due to the well-trodden path that heads to Ben Lawers. I passed the tiny summit cairn, made of a pile of small stones that are almost falling off the steep sides of the summit. I then headed along the ridge in heavy wind-driven rain towards my next summit, passing a couple of guys on the way - After I'd passed them, I had the landscape to myself for the rest of the day.

It was a pull up to the top of Ben Lawers, especially with there being no view to entertain on the way, just rain and the ghostly white of the cloud that allowed visibility of only a few metres. I eventually reached the top marked by a summit cairn and a rather poorly looking trig point. As I reached the top I noted the direction from which I arrived as I would return the same way. I've done that in the past, where I'm elated at arriving at a summit in poor conditions and then forget which way I approached from. Then you are forced to check your coordinates and maps to ensure that you don't end up on an unexpected journey, which is never enjoyed in poor conditions. If it hadn't been for the excellent path on this busy mountain, then careful navigation would have been required the whole route. 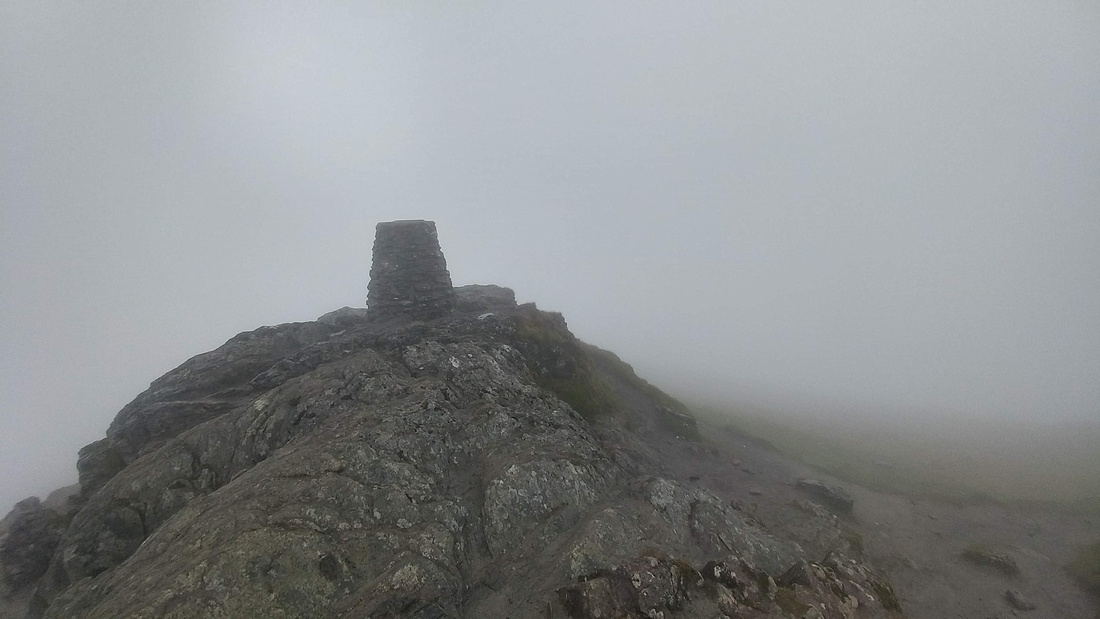 After taking a picture and video snippet, I headed back down the path in the direction that I came from and then I took a right turn down the bypass path that avoids having to climb back over Bhein Ghlas, which I think may be quicker, but I was wanting to lose height and hopefully get below the cloud.

I ambled down the path whistling loudly whilst revelling in the enjoyment that I was the only fool enjoying the conditions in which I found myself. Suddenly, the cloud parted and I was confronted with a view of the glen as the last of the rain stopped falling. It was a lovely moment, even the sun started to peek through and I started to take some video only for the cloud to close back in. So I walked on and suddenly realised that the sun was out again lighting up parts of the landscape below the thick breaking cloud.

It is really hard to describe how things were changing so quickly, from thick cloud to sunny blue sky back to thick cloud, it kept changing so I kept stopping and taking more video and pictures. I've seen these conditions before but have never been able to capture them; I need to venture in the glens more often when rain and sunny intervals are predicted. For me, this was the bleak Scottish landscape at its best. Into the GlenDescendng out of the cloud coming off Ben Lawers 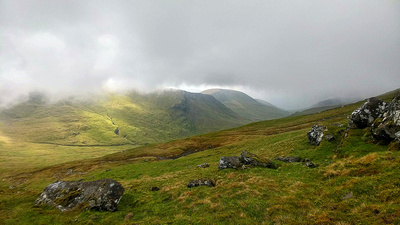 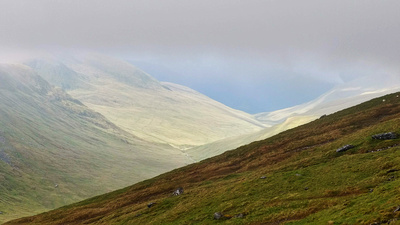 Below the CloudIn a Scottish Glen in summer

After wasting a lot of time standing and staring I finally reached the bealach (gap) between Meall Corranaich and Bhein Ghlas and managed to grab a picture of An Stuc which was clear of cloud for a short time. 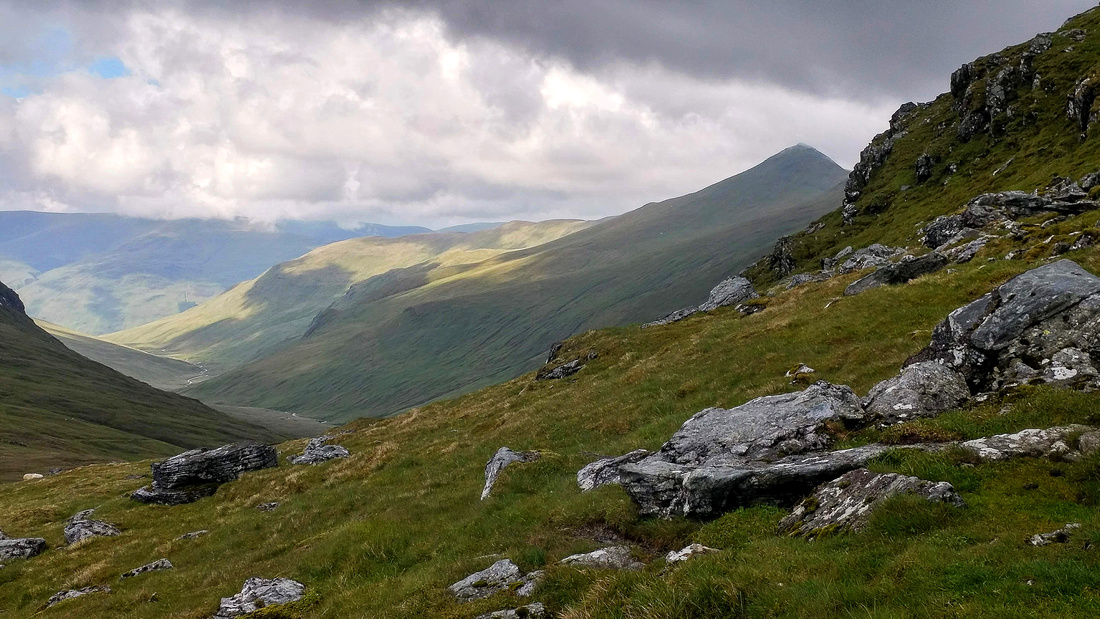 Towards An StucCentral Highlands of Scotland

The walk had taken me five hours, which is good by my standards considering I spent a lot of time taking pictures and video whilst standing around staring at the landscape - I would have been longer if the tops hadn't been clagged (clouded) up. I never managed to get any shots with my main camera as the lens got wet and it's a major hassle to clean the lens when it gets wet, especially when it's still raining. My camera bag has a rain cover, but there was a little puddle at the bottom so conditions were certainly not camera friendly. In fact, they weren't phone friendly either as my reluctance to bag my phone for video has knackered the fingerprint sensor (I also carry a spare bagged phone). If ever I get a new phone, it will be waterproof.

Despite that, I still grabbed enough video to make a wee youtube clip that hopefully communicates the conditions. This was taken on 15th June....in the summertime...but it's nothing new on the Scottish mountains - at least there's always plenty to drink...

Chris(non-registered)
It's great you are enjoying exploring locally, I think that a good photographer can see a great picture in what most consider as mundane and you are seeing it! For me it is all about being out in (what's left of) nature and taking pictures and recording my memories is a bonus.

Yes those midges were an experience that day, more so as I had window beading to finish on a bothy so couldn't run inside!

Thanks Tim :)
Tim(non-registered)
Photography wise, local locations never really appealed to me, but just lately I have really enjoyed going local on a Saturday morning, canals, bridges, etc, and clicked the shutter a few times before I have to be home to take my son for his swimming lesson at 11:30.

I very much understand for you it's about being out there in the hills and mountains, dare a say the photography is secondary, as good as it is! But going local has really opened my eyes and inspired me of late.

Tim
Chris(non-registered)
Thanks Tim, I certainly did enjoy it thanks and it just encourages me to go more often! Just a pity that I have to work!
Tim(non-registered)
Wonderful images and a great story Chris, you had to be up there alone to experience the sunny cloud lifting moment and you certainly were and did. Glad you enjoyed the day.