I keep climbing Stob Binnein for some reason - I must enjoy it!

My encounters with Stob Binnein started a few years ago. I remember a friend telling me that Ben More was "a slog", so I thought I'd try and climb them both from the South, following the route to Stob Binnein and then onto Ben More and back again...

When I parked my car, I looked up and nearly cricked my neck! It's a steep start from the car park with an almost immediate climb of 600m to tackle. It looks hard but it is actually an entertaining climb, you are that busy looking at where you're stepping then suddenly you are 600 metres higher, at a fence! 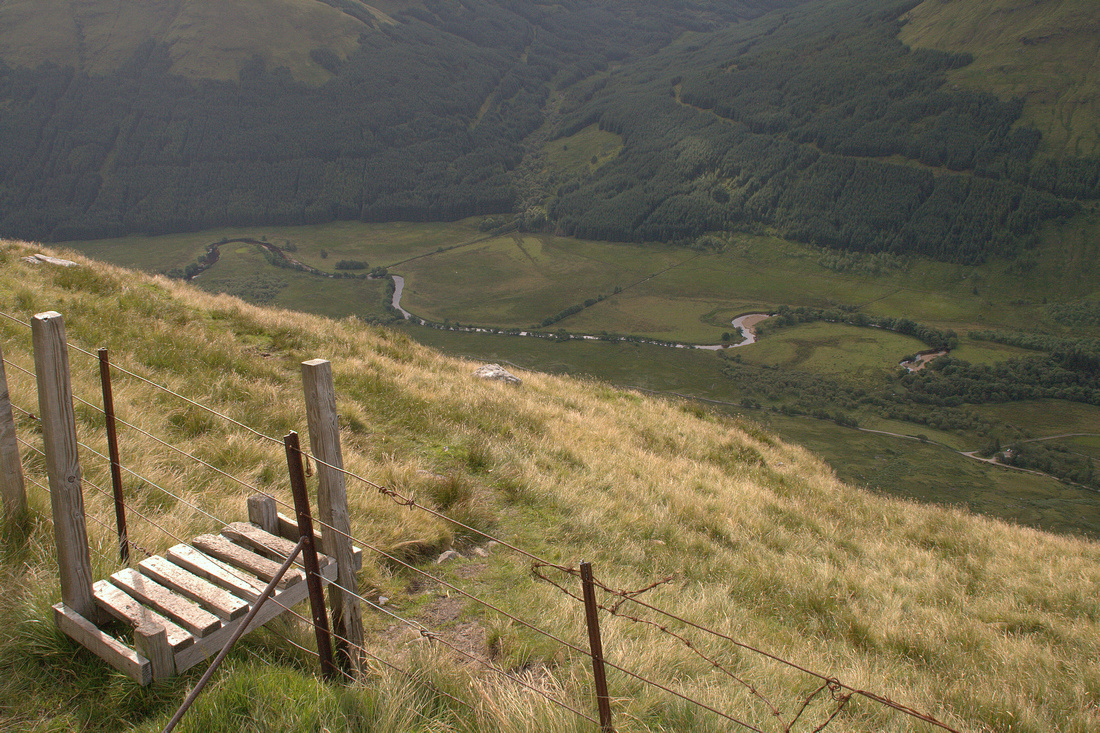 A Steep ClimbThe start of the climb to Stob Binnein is very steep and is marked by these stiles at the top. This is only the beginning of the ascending walk along the ridge to the top

This first time I had my dog, Digger with me and we negotiated the fence-stiles at the 600-metre mark and by the time we got to about 900 metres, Digger went on strike. He sat down and wouldn't go any further, he would only go back... So that was was the end of that trip!

The trouble with dogs is that you can't tell them they're going on a big trip! You just bundle them in the car and hope they're ready for what you've got in store for them. They don't get to tell you they're feeling dodgy so once you've dragged them up 900 metres, all they can do is refuse to move and stare at you defiantly. 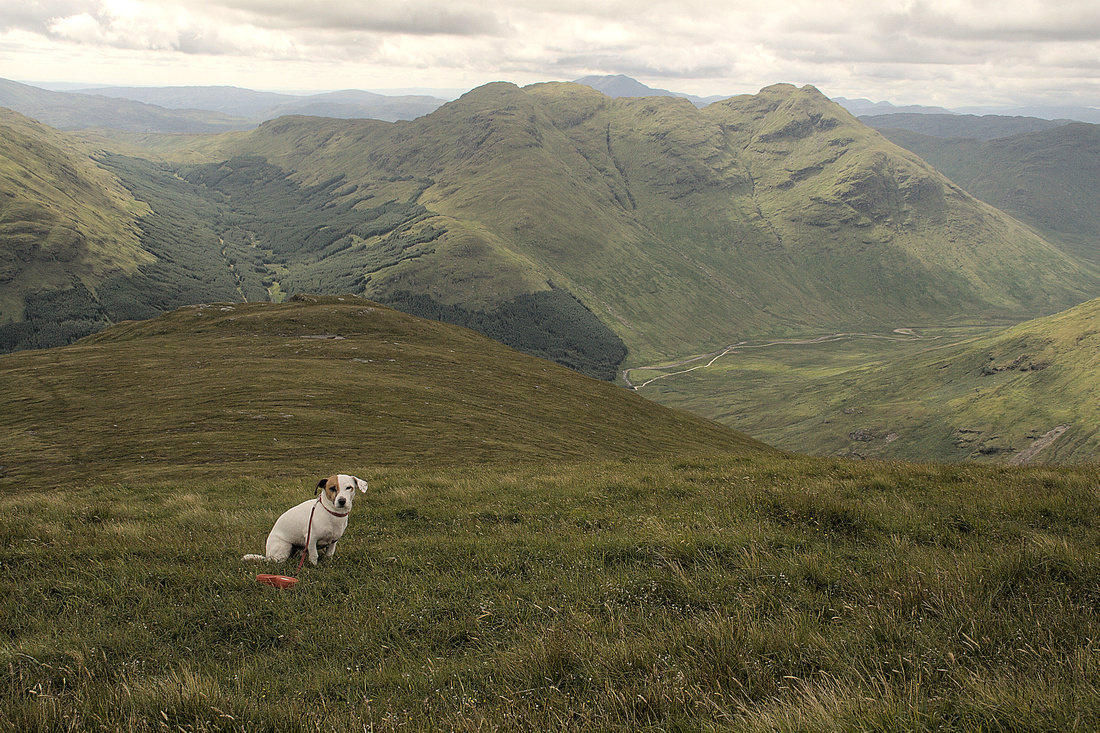 Digger's had enoughHe's sitting down until we go down

So anyway I returned a few weeks later without my grumpy dog and I reached the summit of Stob Binnein. I took one look over to Ben More and it's 600 metres of return ascent and descent and I thought....no... I took loads of pictures that day but, these three images sum it up for me. 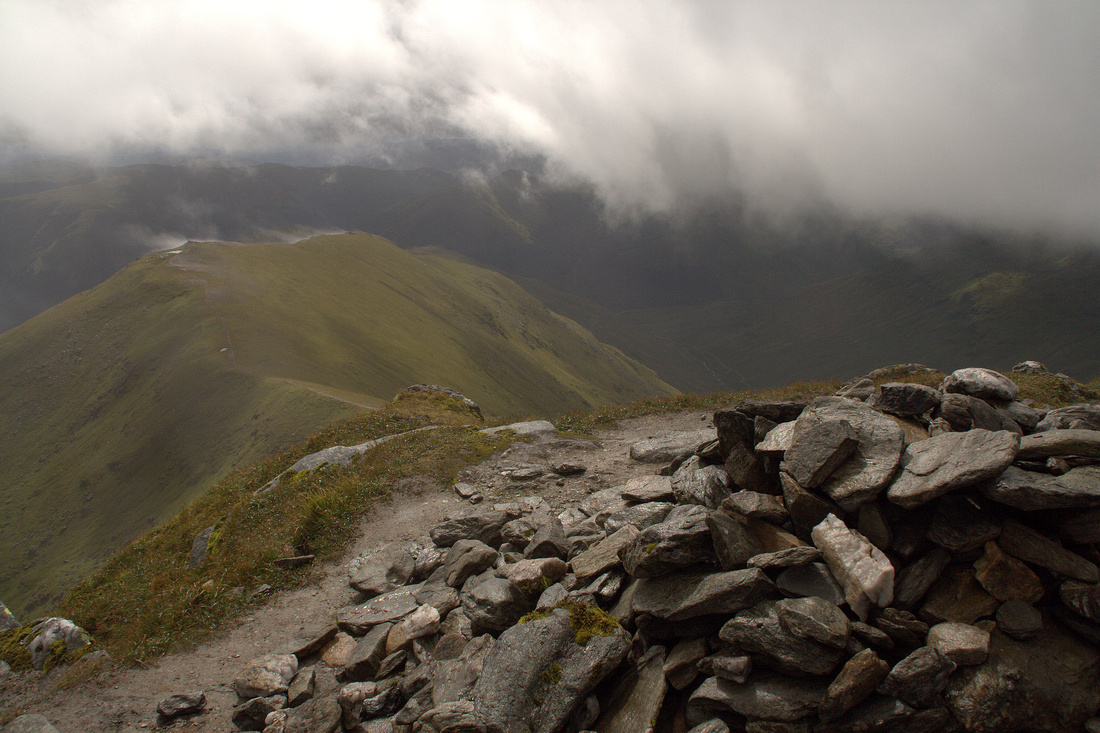 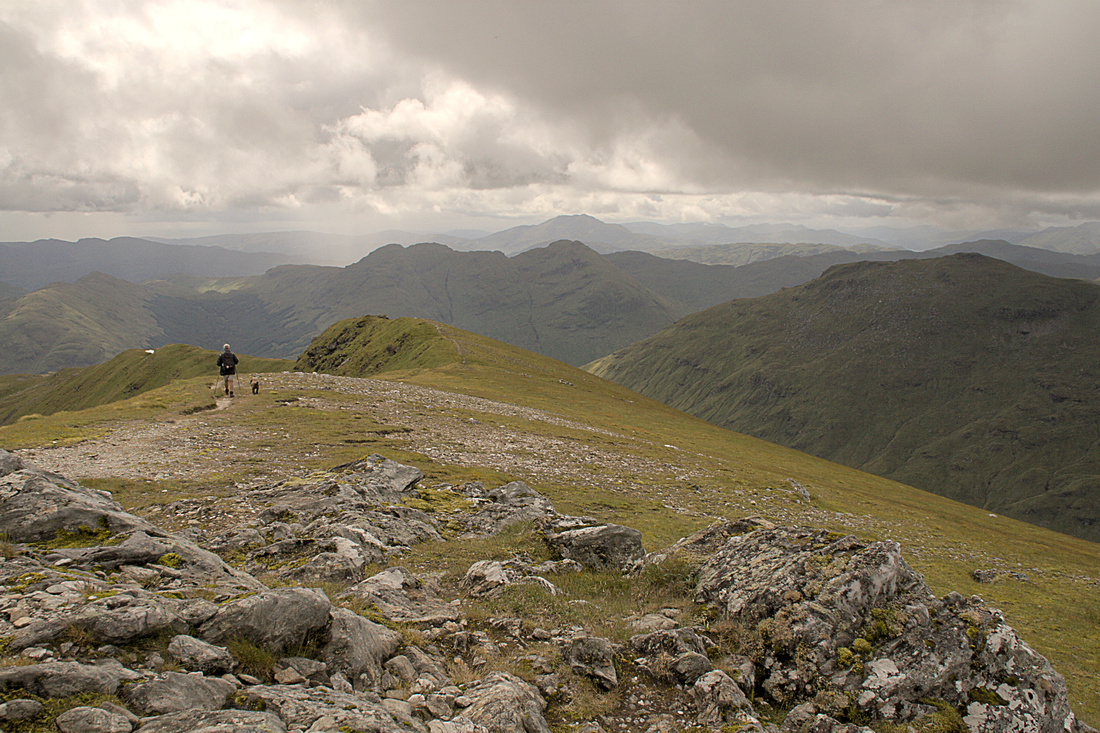 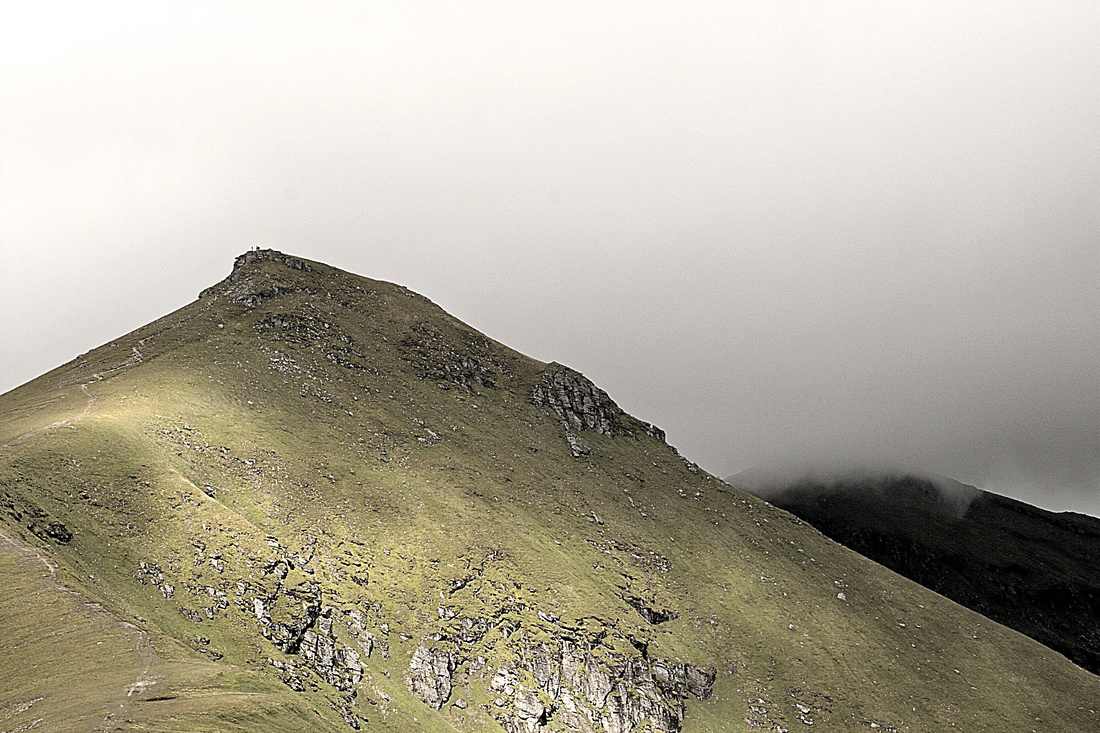 The summit of Stob Binnein from the SouthBen More is the hill shrouded in cloud behind and it swiftly dropped of my to-do list for that day!

So my friend June contacted me wishing to climb a hill not too far from us in October, so I suggested this hill due it being slightly spicier than the ones that I'd known her to climb before. She agreed! so in a wet October day, we parked up at the car park and started the hike upwards.

I had great weather the last time I climbed here and when I say great, I mean I could see stuff...This time above 600m we were in the cloud the whole time so the views weren't of much at all... With the rain the path up to 600m was practically a waterfall as water, like walkers, likes to take an easy route so it quickly becomes a stream. June bought her two dogs, Tig and Fidget, the labrador and the Jack Russell. 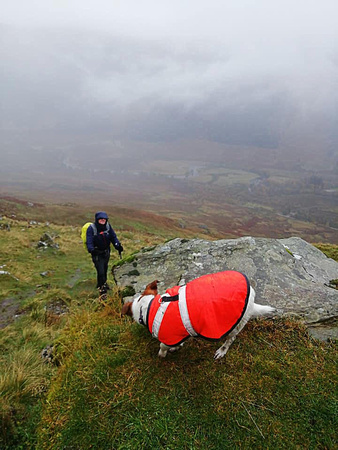 Fidget looks down on mea steep but enjoyable climbe. 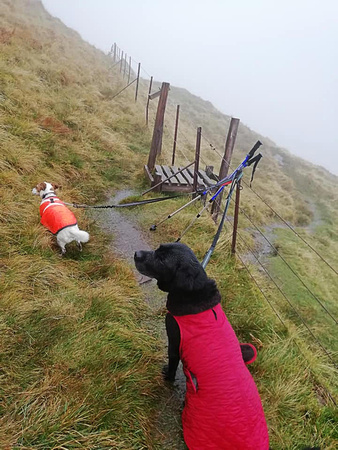 Tig and Fidget at the fenceYou can see the water flowing on the path. You can also see the steepness of the slope and this is the less steep part.

After we passed the fence and passed a stream. I dropped a pin on my GPS as I knew that the route to the next peak cairn can be a bit featureless and I was concerned we might miss the path on the way back down, but luckily we were able to see the path in the cloud.

As we got higher we passed some of the impressive drops where the ridge narrows, the ridge is comfortably wide at its narrowest and the cloud hid the impact of the drops. 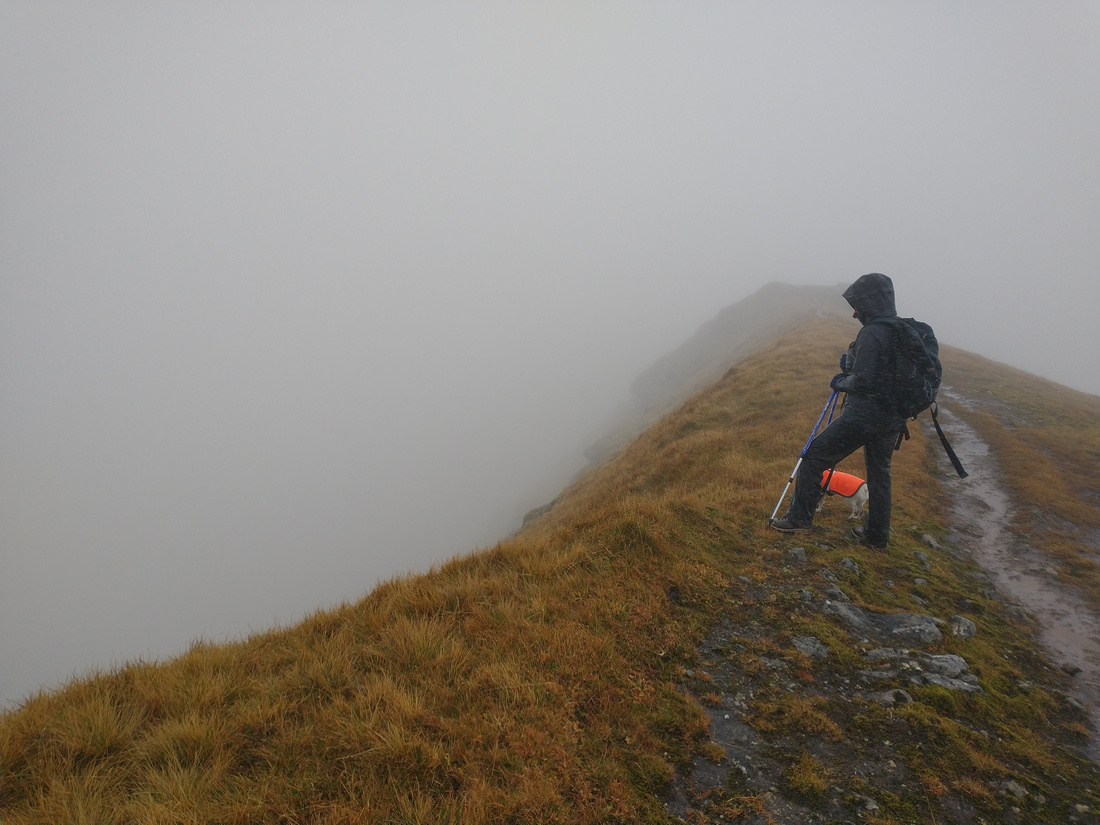 The walk goes on for a good bit and June was growing keen to reach the summit. Eventually, we could see it looming above us. We climbed up, took a picture and then went back down. It was cold here and raining. Lower down it had been quite warm and pleasant. We would have lunch there. 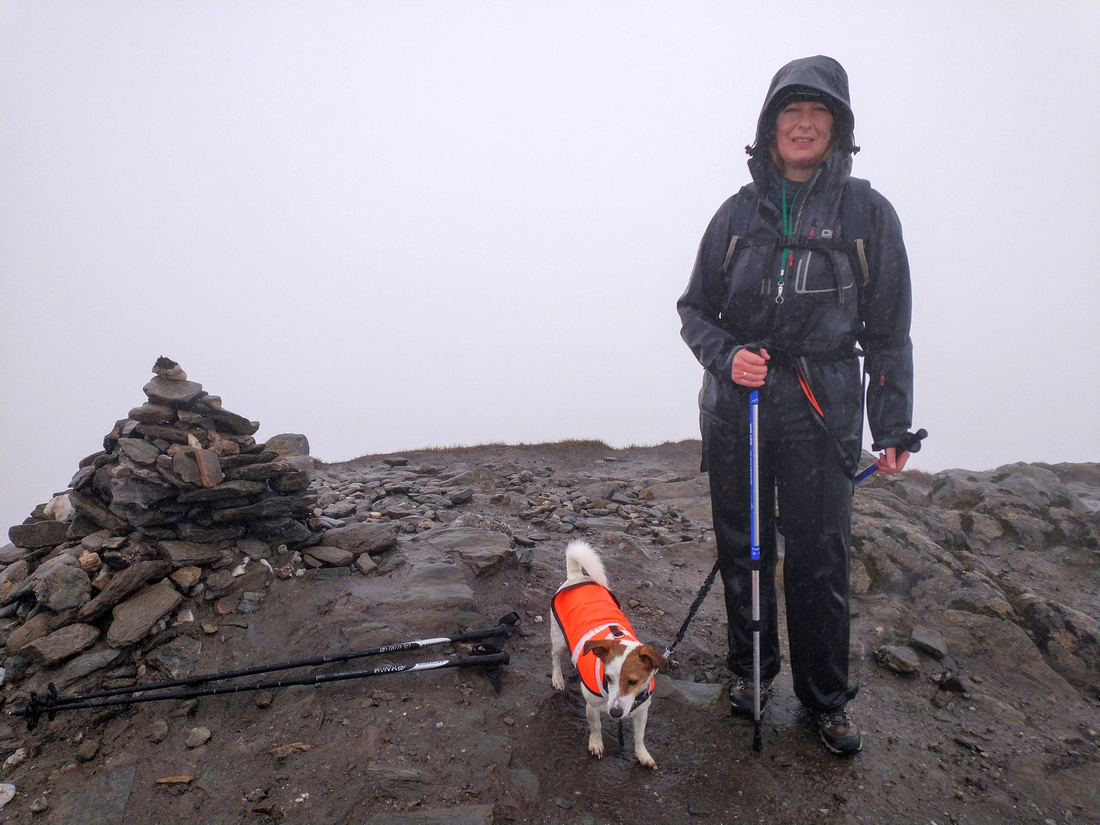 June at the summit of Stob Binneinheight 1,165 metres

So we headed back and for some reason, the return journey seemed to go very fast and we were suddenly at the fence. We had a quick bite to eat and started down the last 600 metres for a steep knee popping descent with boots soaked by the paths that had become waterfalls.

Once we reached the car we changed and as we got into the car, it was getting noticeably darker - we had timed it well.

June really enjoyed this route and I'm thinking that she would love the circular on Bidean Nam Bian, which I have done once in heavy cloud. That's one for the long summer days, I can't wait.